You are here: Home / Reviews / Nightwing Vol 1: Stepping Into The Light Review

Fandom is an interesting beast. Especially Big 2 fandom. Because of the nature of these characters as superHEROES, there’s often more emphasis on the idea that these characters have to be heroic, as near-flawless as one can make them. There’s a defensiveness that comes out when someone who doesn’t regularly read comics tweets “Batman would do more good if he spent his money on social welfare.” When someone implies that by not actively fighting any and all injustice in the world, Superman is not really a hero. There’s a refusal to allow these characters to have flaws baked into their concept, because, for some people, this ruins the idea of a superhero.

I reject this idea. I believe that any and all superheroes, just by nature of the choices they’re making, are flawed individuals at best and should be allowed to be (for lack of a better term) messy. I don’t want mistakes or moral ambiguities in characters retconned away, I want them to be explored and confronted to deepen the story’s complexity. I’m not interested in characters being pure or perfect.

Tom Taylor does not write for me. 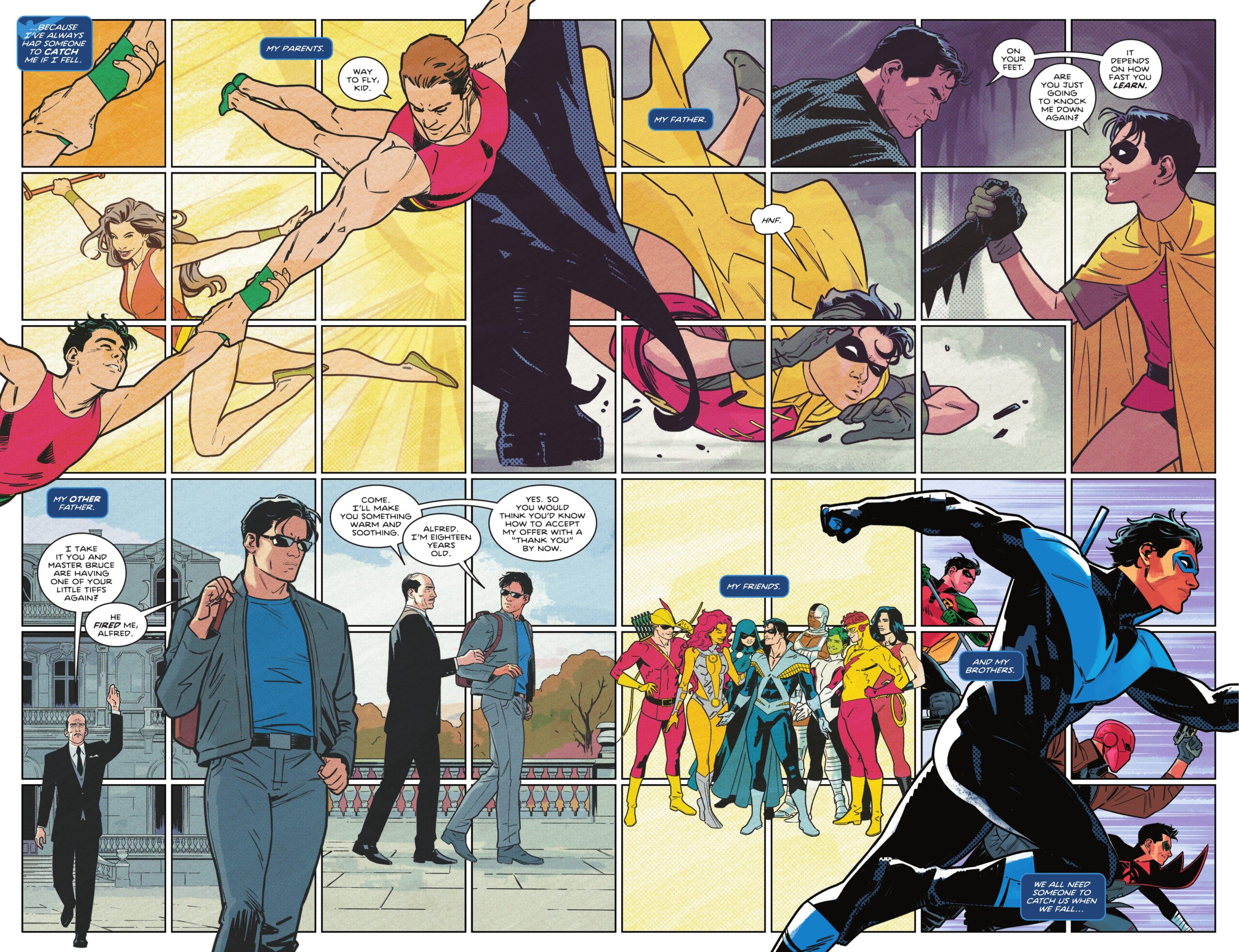 I’ve alluded to my general distaste for Tom Taylor’s writing before, albeit in contrast with a very positive review of his All-New Wolverine. I find his work to be the exact blend of hopepunk and “pure” (derogatory) that makes it obnoxiously intended for the kind of fan I opened this piece talking about. X-Men: Red

was the epitome of that approach, for me – it essentially ends on Jean Grey, the moral paragon of the X-Men, solving racism by destroying the little robots that were making people racist. The book’s characterization of Jean is as a flawless person who deserves no criticism. It’s perfect for these fans who seek out flawless characters.

I just thought Taylor came about this approach sincerely.

Until I read his Nightwing

I bought the first issue of Taylor’s Nightwing the day it came out, excited for the promise of a new era for the character after over a year of amnesiac alter ego Ric Grayson. I was immediately disappointed – it leaned into all of Taylor’s worst tendencies as a writer, but did so deliberately and unapologetically. It ran with his hopepunk tendencies, but in a way that felt cynical – designed to push specific fandom buttons, to follow a formula, rather than something that felt more genuine. It was designed for fans who wanted their characters and stories to be unimpeachable, to have no moral complexity or ambiguity.

My initial impressions were that it was a very calculated attempt to recapture and one-up the magic of Matt Fraction, David Aja, and Annie Wu’s Hawkeye

, an acclaimed run that I would argue laid the foundation for the modern era of superhero comics. Nightwing sets up a new status quo, one where he… owns an apartment building and rescues a dog from bad men who find it fun to hurt puppies. Yeah, it sounds familiar. But also, it’s a three-legged dog – even more heartwrenching than its source material. 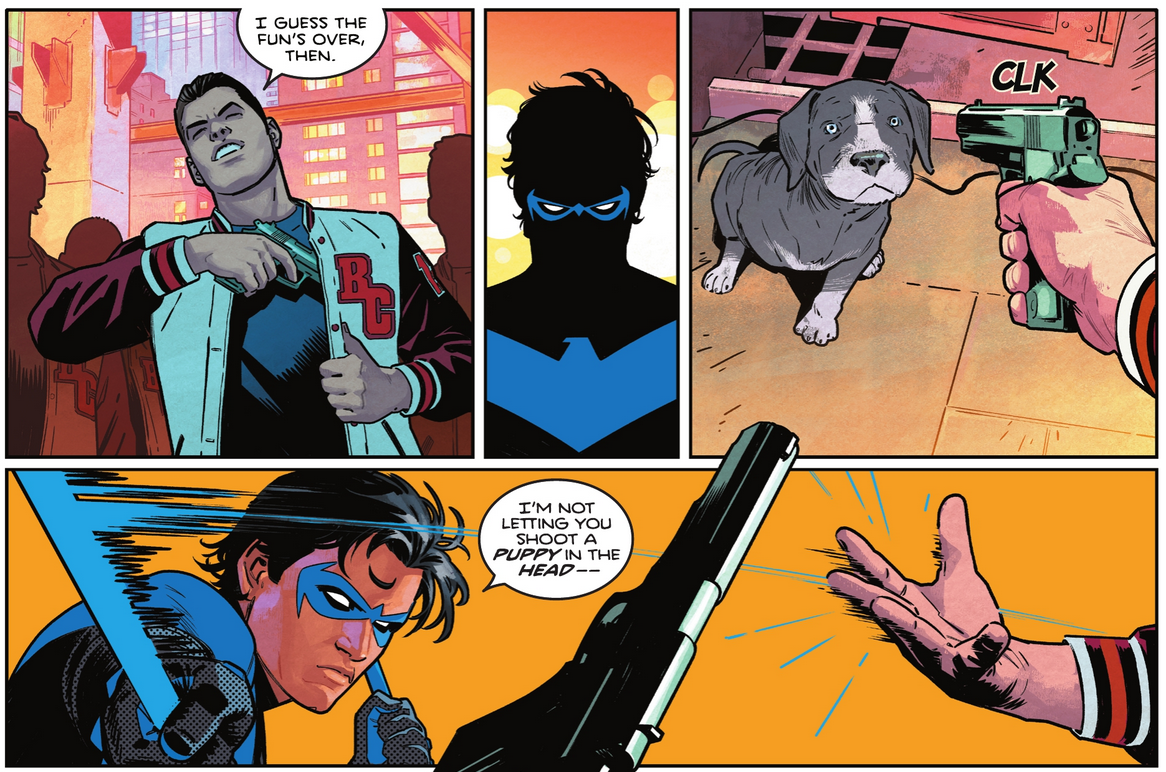 I was very frustrated by this first issue – it felt designed more to elicit a reaction than to tell a story, which isn’t what I find engaging. There were panels that felt intended to be shared on social media, like Barbara Gordon telling Dick he “has a fur baby now.” But it wasn’t just these cute, vapid moments that frustrated me. As I said, this issue was designed for people who want no moral complexity in their protagonists. 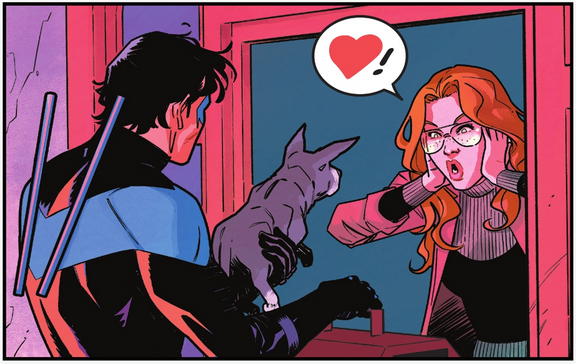 In fairness, it’s also just a gorgeous book. Bruno Redondo is one of the best superhero artists currently working, and his ability to make every page gorgeous, his sense for both layouts and intricate details, and Adriano Lucas’s colors combine to create the perfect medley of superhero visuals this side of Pepe Larraz. The book’s gorgeous, and Redondo is just as much a part of why this book feels so shareable, but Taylor doesn’t provide any substance for him to work with.

See, the crux of both the issue and the run moving forward is not any of these smaller moments – it’s Dick’s inheritance. Alfred died towards the end of Tom King’s run on Batman, and because Dick was off in amnesia-land for a while afterward, he never had time to get his inheritance. Tom Taylor, in the first issue of his Nightwing, has Dick inherit all of Alfred’s money. And this isn’t the money of a butler who’d saved a lot of money while working for one of the richest men in the world. This was the money of another one of the richest men in the world. Dick inherited billions of dollars, an amount that could support generations, an amount that is pretty much impossible to earn ethically.

But Tom Taylor doesn’t want to dig into what billions of dollars actually are, the kind of wealth that that number represents. Dick and Barbara are shocked at how much money Alfred had at the time of his death and how he earned it, and are given only the explanation that he “invested ethically.” There’s no exploration beyond that. Because Tom Taylor has to ensure that Alfred and Dick remain unimpeachable, that they continue to be perfect and pure characters. 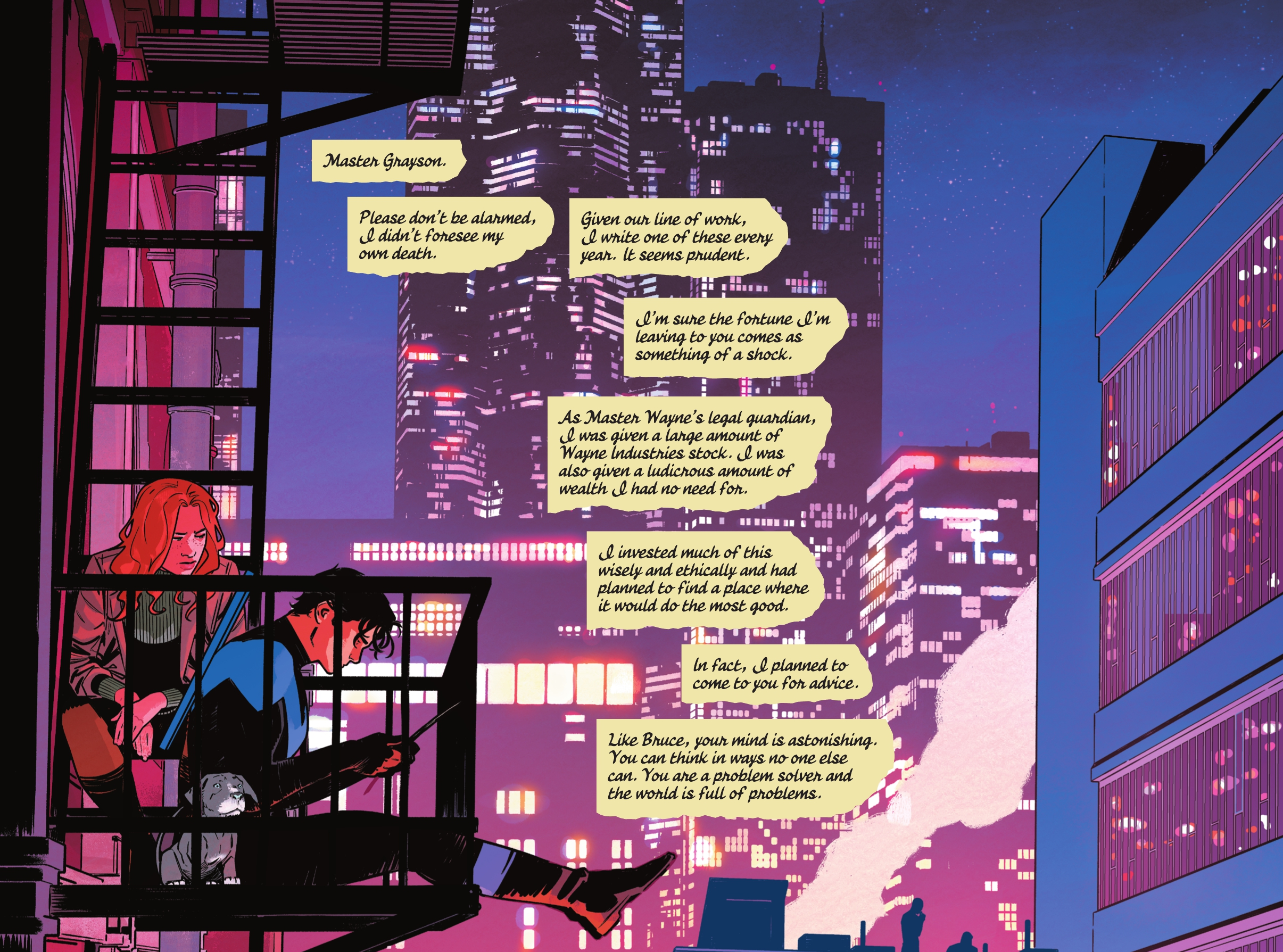 When I went and read the rest of this first arc once it completed, my impressions based on the first issue were confirmed.

There are comics that try to absolve the lead characters of their past sins – Geoff Johns’ Green Lantern is notorious for this, retconning nearly every bad thing Hal Jordan did so it wasn’t his fault. But Tom Taylor goes beyond this trend. He goes out of his way to pre-absolve characters of any criticisms he thinks they might receive in the future.

In the first issue, this was just the matter of the billions of dollars – the line about Alfred earning this money by “investing ethically” is clearly a rush job to avoid criticisms of the character – vague enough that it can’t be proven wrong, but specific enough to include the word “ethical.”

This continues through the rest of this volume, most notably with the reveal midway through that Dick has a long-lost sister. The immediate assumption is that his parents abandoned the child or lost her, which could lead to an interesting messy story. But as the book continues, Taylor ensures that any potential mess that this development could generate is cut off at the source. Melinda’s mother is not Dick’s mother – she was someone Dick’s father had a relationship with before he married Dick’s mother. Taylor makes sure to absolve Dick’s father at every turn, too – this was before he even started dating Dick’s mother, because he spent years thinking she was out of his league. The reason he didn’t know about his daughter was that his girlfriend was kidnapped by the mob and he believed she was dead. And when Melinda’s mother saw Dick’s father married and with a son, she decided she didn’t want to upset his perfect life by introducing any semblance of mess into it. 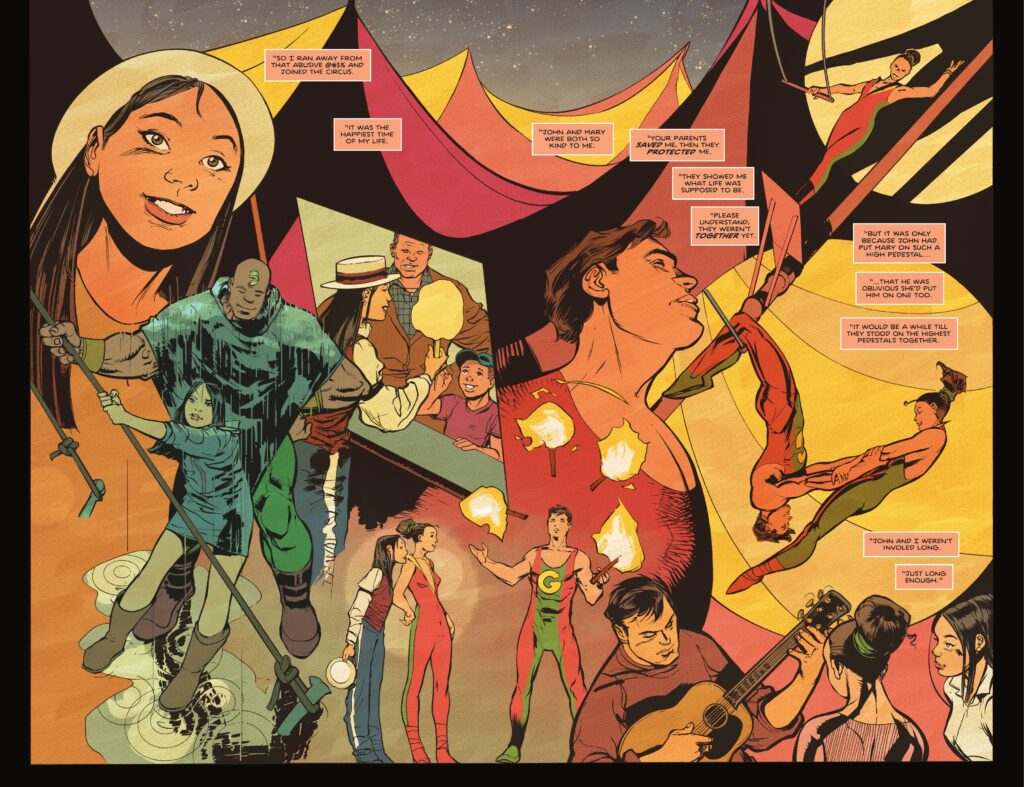 The result of this constant pre-absolution and undercutting of any potential mess is that there’s no room for introspection. Dick doesn’t need to think about any of the men he’s looked up to being anything less than perfect, and similarly he doesn’t need to grapple with the fact that he himself may not be perfect. Taylor has essentially posited that there is no reason for anyone, at any point, to dislike Dick Grayson. Which, in turn, makes me dislike him.

The idea that heroism is constant perfection, is making the right decisions and just being the best person in the world, grates on me. I don’t think that leaves room for interesting stories, and for the crowd of people who want superheroes to be figures to aspire to, I don’t see perfection and never making a mistake as healthy things to aspire to. The far more interesting and honest portrayal of heroism is someone who makes mistakes, who has this mess in their life, but confronts it and becomes a better person because of it. Characters aren’t better when you can wave away any and all criticism of them, they’re better when that criticism leads to interesting stories.

Nightwing vol 1: Leaping Into The Light is not an interesting story. It’s a character fluff piece. It feels closer to pro-Nightwing propaganda than it does a character study. If you want a book to point to when you make claims like “Dick Grayson is the best boy,” this book is what you want. But there’s no direction for the character, no real conflict to drive something new. The book has nothing to say, nothing to do, and little reason to exist. 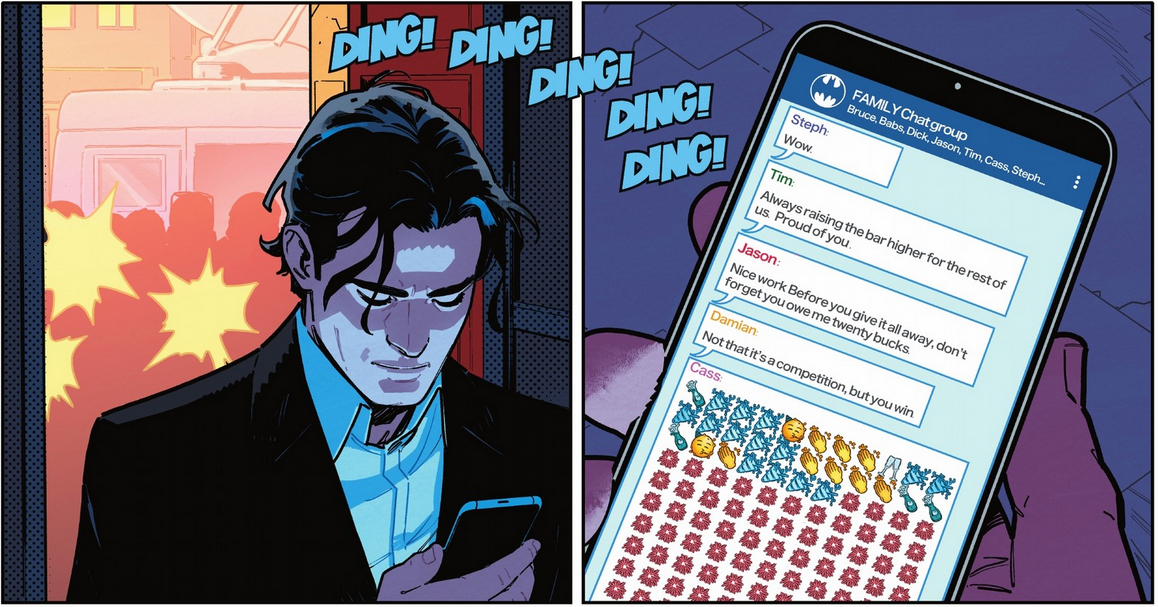 And it’s not like the character isn’t rife with potential internal conflict to dig into! Taylor even acknowledges it – he forgot who he was, he doesn’t feel like he’s done anything worthwhile. But rather than actually dig into this, it’s brushed aside – don’t worry Dick, you’re a superhero who’s saved countless lives, you just have the jitters.

In the end, the only internal conflict Dick had (what to do with the money) is resolved in just a few issues. He talks to a bunch of trusted confidants, and decides to create a charity fund in Alfred’s name with the goal to “end poverty” – which is so blatantly a response to the Batman discourse that it already feels tiresome. That’s it. The conflict is gone, and Dick is told by pretty much every member of the Bat Family just how incredible of a person he is. 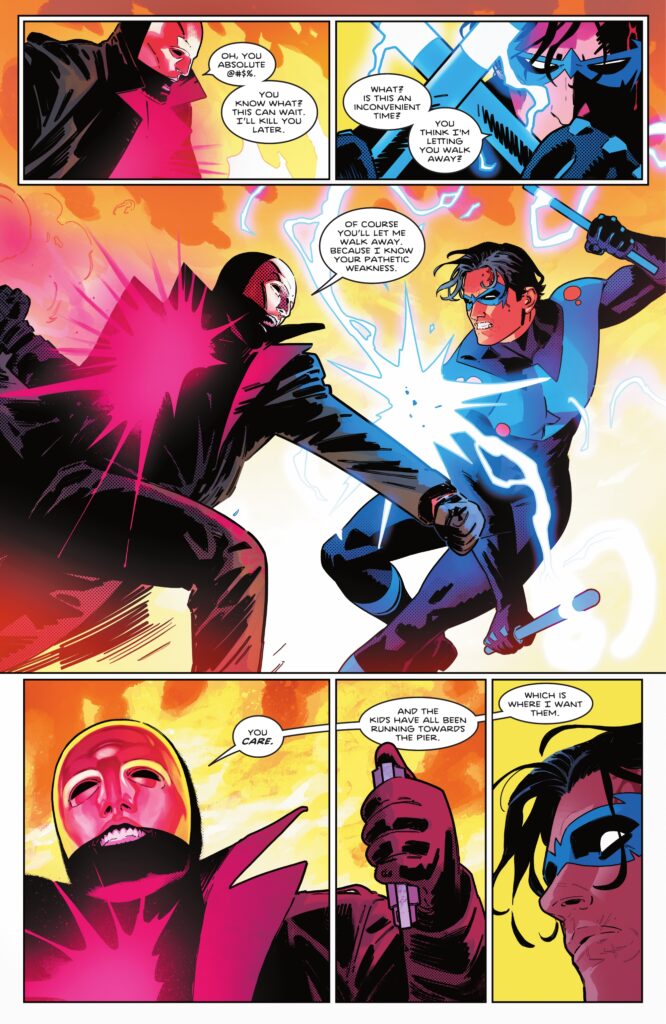 Tom Taylor is a writer who has no desire to explore. He doesn’t interrogate his characters in a meaningful way, and he doesn’t have the imagination to create something that feels fresh or new. Nightwing is his worst offense to date – the book has the most room to do something that doesn’t feel trite, and actively chooses not to use it. You can’t read this book and claim Nightwing isn’t a flawless individual. Hell, even the primary antagonist’s analysis of Dick is that his greatest weakness is how good of a person he is. Nightwing is on a pedestal for the duration of this volume, and I can’t see anything to indicate this could change later in the run.