You are here: Home / Featured / Nightwing: The Prince of Gotham Omnibus Review!

Are you a Dick Grayson fan who enjoyed his run as Batman, checked out of the New 52 for obvious reasons, and came back because you heard good things about Grayson and find yourself asking “Hey what the heck happened in the *thirty* issues of comics in between these two series?” Well Nightwing: The Prince of Gotham Omnibus is here for you! And now you may ask yourself, “Dope but…are these many pages of comics…good?” and dear reader you are in luck because I have the answer for you in a resounding…eh. Nightwing’s New 52 era was a run helmed by writer Kyle Higgins and mostly consisted of three main artists over the 30+ issues: Eddy Barrows, Brett Booth, and Will Conrad along with a handful of fill-in artists and collaborators.

New 52 Nightwing’s biggest sin is being sandwiched in between two huge swings with the character of Dick Grayson. Grant Morrison had just electrified the character by having him step into the role of Batman and creating a strange psycho-pop Gotham for the Bright Knight and his surly Boy Wonder, Damian Wayne to traipse through. Immediately after this run Tim Seeley and Tom King took Dick out of Gotham and into the world of psychedelic espionage in another fresh and radical take. And unfortunately in the middle child is Nightwing, a mostly standard Batman family comic with a largely forgettable supporting cast and constant derailment from crossovers that it felt hard for any of the interesting things it had going for it to stick.

It’s a shame that this series ended up not making much of an impact as a whole because its first couple of arcs set up a lot of potential for the series and for the character as a whole. The first six issues see Haley’s circus return along with an old flame and a mysterious assassin. While the story doesn’t break the mold at all issue to issue, the real hook is around issue six where the mystery of the “Saiko” killer’s identity and motivation ties into the Court of Owls mystery in Scott Snyder and Greg Capullo’s Batman. 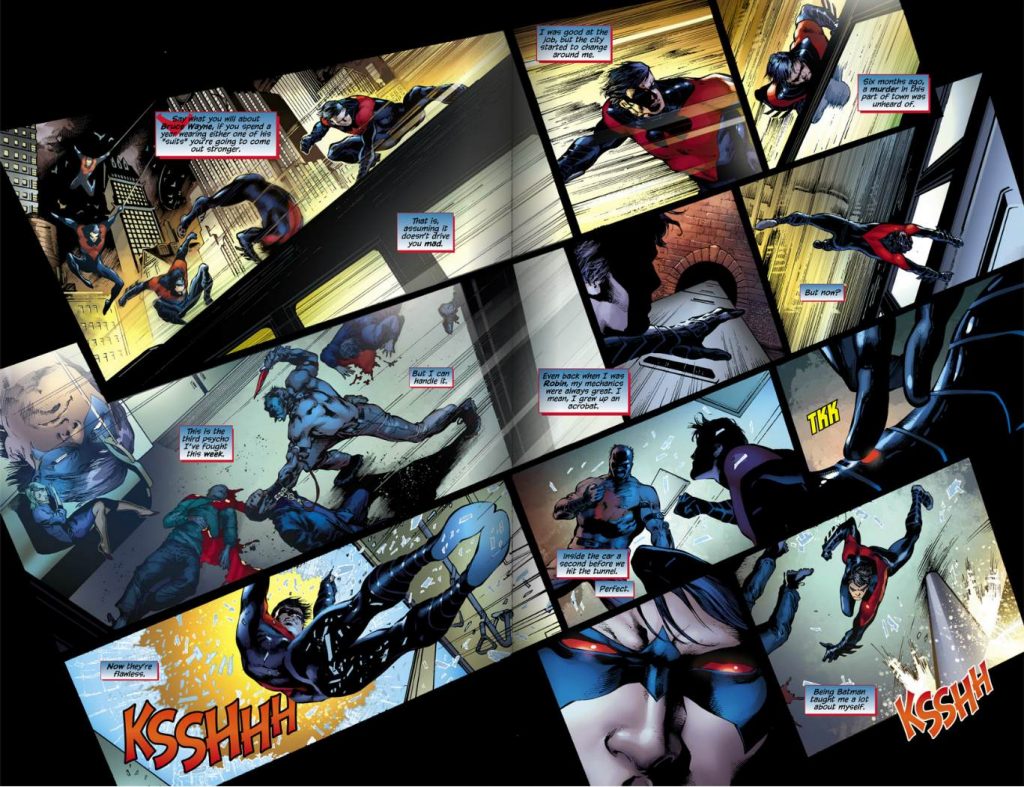 Issues #6-9 amount to a major retcon of Dick Grayson and Haley’s Circus, revealing that Dick’s great-great-grandfather was a Talon assassin in the Court of Owls and worked with Haley’s to ensure that this legacy continued in a line of the “Gray Sons”. The Gray Son retcon is a huge change to the character, and the slow burn of the mystery that ties in so deeply into the first major crossover between the Bat-books of the New 52 was so incredibly promising and also incredibly well told with Eddy Burrows, Eber Ferreira, Ruy Jose, and Rod Reis all bringing their a-game on the art duties. The biggest shame is how little this retcon comes back to play in this run. Dick fights his great-great-grandfather in a tie-in and it never comes back up substantially in this series, which really indicates just how averse this series is to doing anything markedly interesting.

In the lead up to the second major crossover, there are quite a few forgettable issues about a secret society aimed at killing false Gotham idols and an iffy subplot about a Gay cop seemingly framing Nightwing for murder. It’s portrayed as the cop getting revenge for Saiko killing his boyfriend who was also a cop, but it turns out he was really the secret society’s leader. It’s…fine I guess? That character is really the only gay character in this series and doesn’t show up really ever again, which is definitely a choice.

Another major subplot that has a little more longevity is Dick coming into ownership of Haley’s Circus and making it a permanent resident at Gotham’s abandoned Amusement Mile but *ruh-roh* the only person at the bank who can help him with this is Sonia Zucco, the “cute” daughter of the man who killed his parents. This personal life status quo is an interesting idea and is a genuinely good tie to Dick’s history while trying to set something for the future, which is a running theme in this run. However, this idea gets derailed by “Death of the Family!” 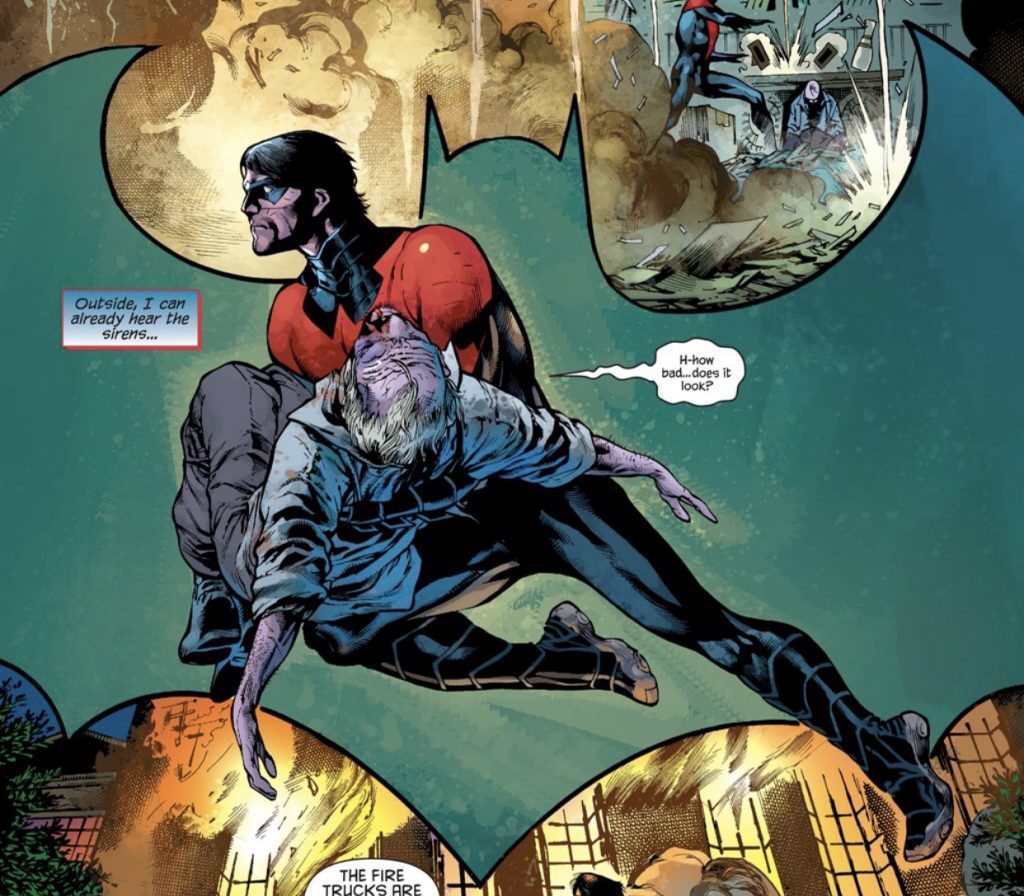 Where “The Court of Owls” actually enhances Nightwing, “Death of the Family” actively makes it worse. It felt like there was a bit of momentum at first, but as soon as the dialogue mentions “the Joker’s back in town” with an asterisk directing to Snyder’s Batman, the plot really grinds to a halt. Of course, it resumes just in time for the Joker (with his face cut off because this was the early 2010s) to destroy Dick’s plans, jokerize his supporting cast and essentially take that whole plot off the table for the rest of the run. Reading this self-contained to the Nightwing title is such an incredibly frustrating experience as the Joker in this feels like playing a video game and talking to a character who has not appeared before and accidentally entering a story mission that ends the game.

Crossovers derailing a story is not a new experience in superhero comics, but the specific frustration is that this storyline in Batman can be read without any of these tie-ins, but the Joker sells so any Bat-related title has to have a Joker attack somehow happening simultaneously. Not to mention that two issues later the book has to deal with the fallout of Damian Wayne’s death in Batman Inc. Just a stiff halt to the momentum that is incredibly frustrating to get through and all the more disappointing in light of how well “The Court of Owls” fits in with the title.

The next big shift is Higgins moving Dick to Chicago in response to the revelation of Tony Zucco being alive. This Chicago move is honestly a much needed soft reboot in the middle of the series. Brett Booth, noted not great guy, leads the new art direction. While Booth’s artwork has never been my favorite, his dynamic poses and expressive faces work really well for this slightly new direction which is followed up with Will Conrad picking up a lot of these cues along with a more subdued house style. Dick in Chicago is much brighter than in Gotham and much less bogged down in crossovers and tragedy. There’s a new supporting cast in Dick’s roommates and a new big bad in the Prankster. There’s a decent enough parallel story between Dick’s revenge quest for Zucco and the Prankster’s revenge quest that is a somewhat interesting story and after that…the series starts to wrap up. 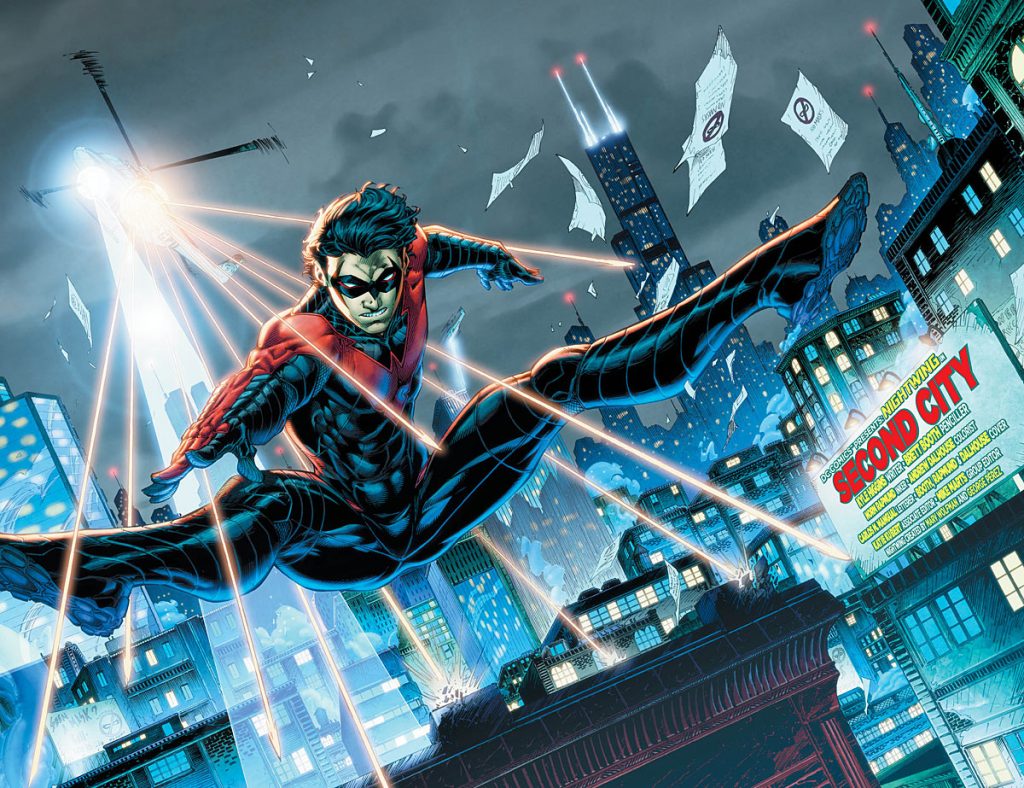 There’s a “Zero Year” tie-in, a return of an earlier character who has ties to Mad Hatter, a two-part small wrap up to the series (featuring a baby Russell Dauterman on art), and then Nightwing #30 is a backdoor pilot for Grayson. And then the series is over. There are a handful of special issues in this collection as well. The zero issue (not to be confused with the “Zero Year” tie-in) is a retelling of Dick’s Origin with a bit of cribbing from Tim Drake’s origin, the Secret Origins story is this story but with a slightly different angle. The Nightwing Annual is a kind of forgettable Dick and Babs story that really only works in the context of whatever Babs’ status quo was at that time. The best special short was the Valentine’s Special since it was short and sweet and featured some Sanford Greene artwork and featured a great character who was unfortunately never seen or heard from again.

The New 52 Nightwing run is a difficult one to parse because it’s not bad, especially considering the New 52’s weaker titles. But at the same time, it really didn’t try anything new, outside of the Talon retcon (which wasn’t taken anywhere in the run). If you liked Chuck Dixon Nightwing, you’d probably like this run. Dick is young, there are a handful of one off bad guys and a rotating cast of love interests and supporting. It’s incredibly traditional superhero comics in the vein of the superhero soap opera and that is definitely someone’s bag. But the monthly soap opera with no real goal feels so hard to stand out in between two takes on a character that were capital “T” Takes. Higgins delivers a decent and relatively consistent take on the character without reinventing the wheel and stays on for the whole run and the special issues which is an achievement on its own during the topsy-turvy creative shifts of that era. Overall, this run of Nightwing is likely to be most remembered for a retcon that did nothing with next to the giants of Batman and Robin and Grayson.

But the costume design looked tight as hell when I was 14.