Following on the heels of the Avengers “Age of Khonshu” story arc, Moon Knight: The Midnight Mission

established a new status quo for the hero. Attempting to atone for taking over the world on Khonshu’s orders, Moon Knight has declared a portion of New York City his “mission” and has dedicated himself to protecting all those who travel at night. I was sold on this gimmick within the first five pages. And I don’t say that to be dismissive. This is Moon Knight’s sixth ongoing series since 2006.If you’ve paid attention you’ll notice that every #1 comes with a new gimmick.

He’s Batman, but crazy; he’s got a suit; some of multiple personalities have been replaced by Wolverine and Spider-Man; Jeff Lemire is writing it. For as much as people seem to like the character and hold his earliest runs in high regard, Moon Knight has always seemed like a character in search of an audience. So they just keep retooling, slapping on new coats of paint, lights and buzzers. Compared to say, Ghost Rider, the Punisher or even Namor, all of whom seem to stay pretty consistent through various relaunches.

And don’t get me wrong, I’ve never let that stop me from picking up an issue of Moon Knight, but he’s never been a character I felt like I needed to keep up with month to month. This first volume has entirely changed my mind about that. With this new run, it feels like ideas are taking precedence over the gimmicks.

The set up for this new run is simple: Moon Knight is leaning into his duty as the fist of Khonshu by selecting a chunk of New York as his mission. Now it’s his job to protect anyone traveling at night while also balancing his Avengers-mandated therapy sessions by day.

All the groundwork for the story that follows is laid out in the first issue. We meet Marc’s new therapist, Dr. Sterman, and he gets a secretary/sidekick in the form of Reese, an unwilling vampire he rescues from a pyramid scheme/cult. There’s immediately a fun interplay between his relationship with Dr. Sterman and the one he has with Reese. 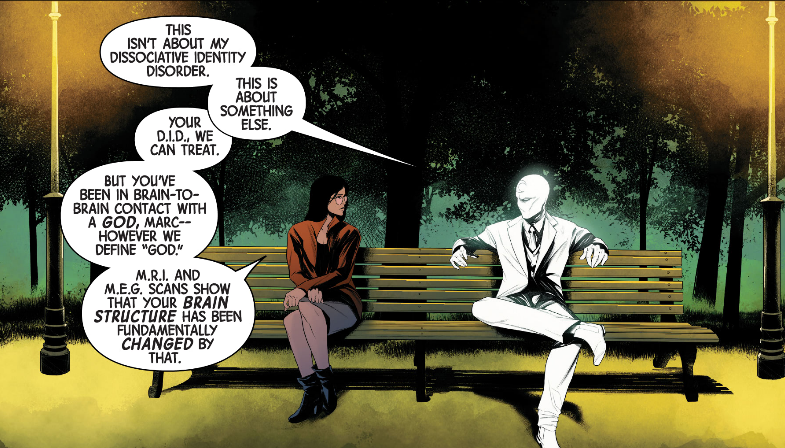 Dr. Sherman’s specialty is “superhuman menticide.” (For those not familiar with the term, Webster defines Menticide as “a systematic and intentional undermining of a person’s conscious mind.”) Sterman has an obligation to treat him as his doctor, but it’s clear she also sees him as a scientific and medical curiosity. Meanwhile, Marc needs her to sign off on his mental well-being so the Avengers feel comfortable letting him run around on the streets.

(Just a note: Marc and Dr. Sherman’s conversation in the first issue makes several references to the recent Avengers arc, Age of Khonshu. Everything you absolutely need to know about the events of this story are explained in these first six of Moon Knight. I’m probably one of the more vocal apologists of Aaron’s Avengers run and even I couldn’t really get through Age of Khonshu. Your mileage may vary.)

Meanwhile, over the course of the story Reese comes to see Moon Knight as a lifeline. Despite thinking he’s crazy, working for him has brought a sense of stability back to her life that went out the window when she became a vampire. She might not get his whole deal, or even like him very much at first, but she knows that having him around might be what stops another person in her neighborhood from meeting a terrible fate. It also helps that he’s completely unphased by her vampire hunger ramping up at the sight of blood.

And Marc is pretty clear about why he likes having her around. 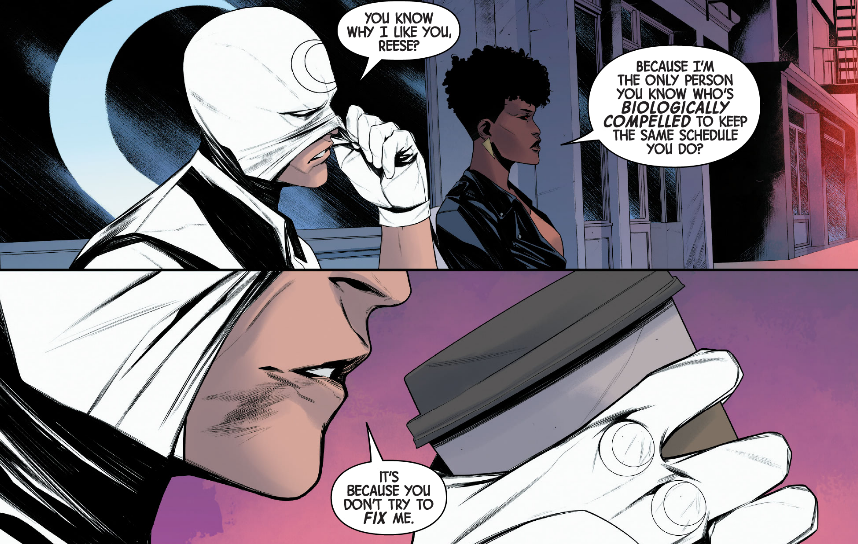 It’s a good pairing and it’s fun watching their working relationship and friendship develop throughout these six issues.

Things are quickly complicated by the actions of a shadowy new foe and the revelation that Kkohnshu has a second fist serving him on Earth, Omar Badr aka Hunter’s Moon, who will soon come into conflict with Marc and his mission. Not only is this all a great skeleton upon which to relaunch the character, it’s a fantastic vehicle for the ideas the book is riding on.

One of the more interesting concepts propping up this book is the notion of theological rupture – the idea that extreme trauma can cause a break between the faithful and the object of their belief. We see it both in Marc Spector, raised Jewish, and in Dr. Badr, raised Muslim. Two men both raised in strong faith traditions who found themselves murdered.

While Spector was raised by a Rabbi and believed his God existed, he had no ability to put faith in a God who did not believe would ever act or speak to him. Badr, raised by devout Muslims, is on the other end of the spectrum, indulging in piety in the hopes that he would one day experience the faith in God everyone around him seemed to share.

As someone who spent years attempting to exorcize my Catholic guilt, there’s a part of me that truly identifies with both of these characters. Like Badr I came from an incredibly devout family. And while I didn’t have a clergyman for a father, I grew up in an environment where becoming a Priest was put forward as a logical thing for a faithful Catholic man who “hears the call” to do.

and seeing Constantine around this same time and just being racked with guilt I didn’t have enough faith. Meanwhile our Parish priest used my inquiries about faith as a way to steer me towards seminary and the priesthood (which is why I’ll always have a soft spot for Nightcrawler’s whole deal, Austen stuff and all.) I didn’t have faith but I desperately wanted to understand it.

I suspect that most people who shy away from the religion they were raised with eventually have to tussle with some aspect of that “is it me or was it them? Is it God?” I imagine that both Marc and Omar were content to live out their lives with the answers they’d settled on. Until their murders, and subsequent resurrections by an ancient god whose existence they can’t really deny. But like Gabriel says in Constantine, knowledge isn’t the same thing as faith. For Moon Knight his knowledge is a burden, and for Hunter’s Moon it is the fuel for his devotion. But neither of them can seem to really bring themselves to have faith in Khonshu the way their fathers believed in God.

The way Marc and Badr play off each other – both as antagonists and then brothers-in-arms is a fantastic addition to Moon Knight’s corner of the Marvel Universe. For a character whose recent outings have been so defined by his relationship with Khonsu or the other personalities living inside his head, seeing him get a new foil (and friend) is great.

Jed MacKay’s plotting and writing throughout this first arc are incredibly strong and this story has firmly placed him on a list of writers whose work I will read without hesitation. I was already a fan of Alessandro Cappuccio’s artwork from his stint on Mighty Morphin Power Rangers and this book just has me excited to see what else he’s got in him. His work reminds me of Phil Hester’s: bold & stylized, with every face, hairdo and gesture lovingly rendered onto the page. Rachelle Rosenberg rounds out the art team on coloring duties with supernatural skill. The coloring in this book could be its own character and it really shines on pages where Moon Knight or Hunter’s Moon costumes can take center stage. 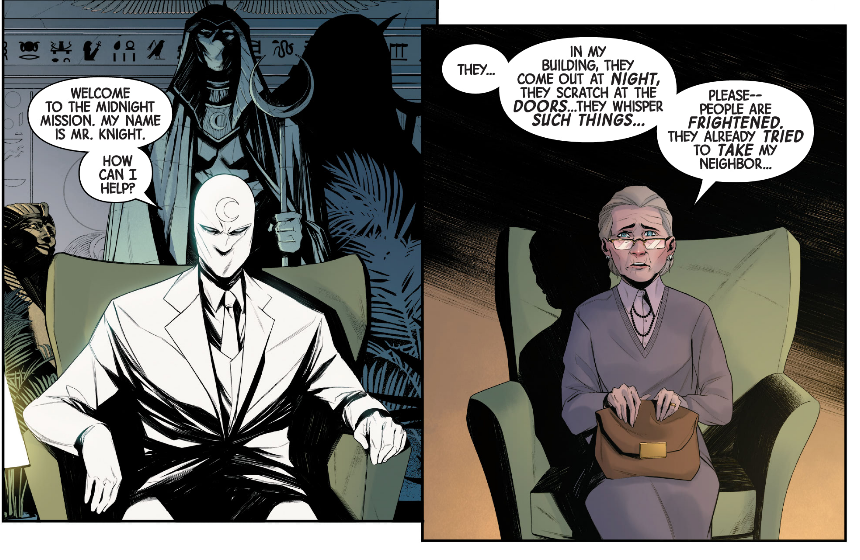 There’s one other thing about this relaunch that I really appreciate. For the longest time comic book fandom lived with the fear that impending film or televised adaptations would cause blowback to their favorite titles: characters redesigned to look more like their adaptations, origins retconned, plot beats mimicked, etc. And we’ve seen bits and pieces of that a lot over the years, even if it’s just something as simple as Aquaman getting Jason Momoa’s tattoos but staying a blonde haired, blue eyed white guy.

But this relaunch of Moon Knight doesn’t make any efforts to turn a character with a pretty spotty history into something easier to consume for people who saw the trailer for the upcoming show and thought “what’s this guys deal?” Like US Agent, Shang Chi, and Phoenix Song: Echo, this is a series that’s very much positioning its lead character as something you’ve got to accept, warts and all. Perhaps I am naïve and missing the big red flags of Marvel no longer trying to broaden the mass appeal of their more peripheral heroes, but if the result is books like this? Count me in for the ride.

I highly recommend grabbing a copy of Moon Knight: The Midnight Mission and catching up with the rest of the title as quickly as possible.