You are here: Home / Featured / Merely a Monument; Always a Seamark – Sandman and DC Universe Connections

Throughout the press tour in anticipation of Netflix’s adaptation of The Sandman, there’s been focus on a particular diversion from the source material — its lack of connective tissue to a grander universe. This is usually spun as a liberating factor — “for too long the weight of the DC universe weighed heavy on the brains of the dreaming, etc, etc.” The usual assumptions also hang in the air, namely that some rights issue is preventing the authors from following the script exactly. While excising the comics’ connections to the DC world is, for the most part, done without losing too many key plot details, the absence of the DC Universe is indicative of larger tonal problems for the series.

While the comic’s ties to the DC universe became less explicit over the course of its run, only really becoming central to the plot in the first two volumes and the run’s climax, it adds a texture to the run that the adaptation is worse off for excluding. In the series’ fourth issue, Passengers, Morpheus runs into the Martian Manhunter while trying to track down erstwhile JLA villain Dr. Destiny. J’onzz’ immediate show of respect for the Dreamlord, as well as the glimpse we get of his Martian form, are two striking details which provide a glimpse at the cosmic aspect of Morpheus’ reach. In both the comic and the adaptation, we have by this time seen how Morpheus appears to his former lover, Nada. This beat, however, fails to capture the interplanetary scale of Morpheus’ work in the way that his brief encounter with J’onzz does. It’s the scope of the Justice League that allows it to act as a shorthand that communicates scale in a way that the show never even attempts to, although the scale and tone continues on as if that gravitas was taken for granted. The sense of a larger universe was not an aspect that Sandman

needed to escape, but a crucial component of its gravity. 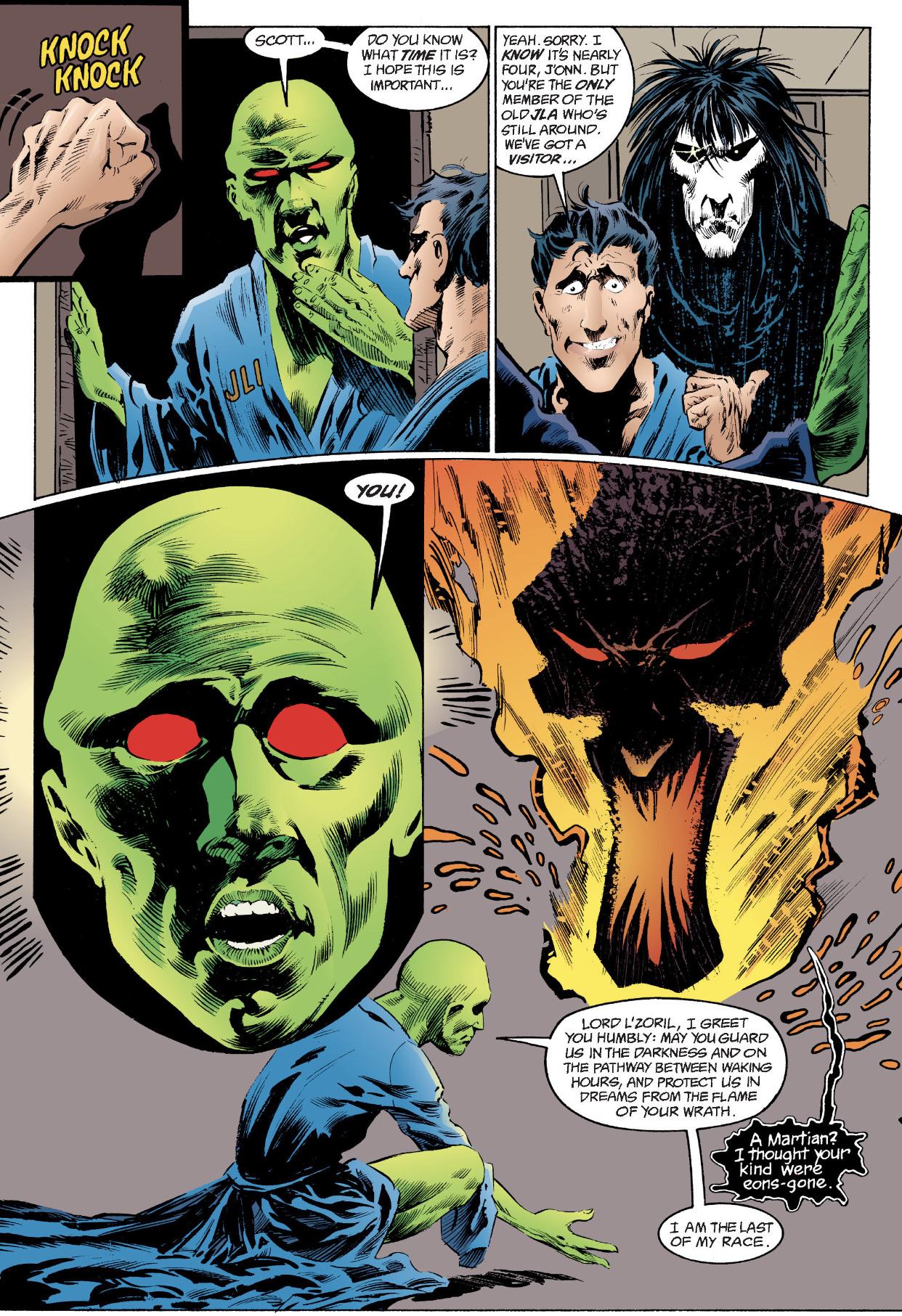 The generic fluidity in the comic doesn’t rely on its grounding in the DC multiverse to establish it — see the scene in Doll’s House in which Lyta darts from dream to dream — but rather the comic is able to use the DC universe to announce its intention as a work early on. In his introduction to A Game of You, Clive Barker writes

“In these narratives, the whole world is haunted and mysterious. There is no solid status quo, only a series of relative realities, personal to each of the characters, any and all of which are frail, and subject to eruptions from other states and conditions.”

Without the backing of a larger universe or the ambition to gesture towards one, Sandman loses this crucial element, and becomes, ironically, a more difficult work to approach. Gone are the handholds that various genres and stories — all those relative realities — through which a reader could find their way, replaced by an all-too-cohesive surface that lacks the ghosts of its source material.

The comic’s first arc, Preludes takes time to introduce the Justice League International, highlighting the comic’s joy in skipping through various realities, as well as the ease with which Gaiman layers the comic’s tones and textures. Preludes features an absolute murderer’s row of artists, who communicate the various environs of Morpheus’ quest. As Morpheus travels to the JLA, he passes through the dream of Mr. Miracle. Sam Keith transitions into a really thrilling Kirby pastiche, placing us in the mind of the super escape artist. This conceit, that the dreamscape mirrors the dreamer formally as well as in its content, is an aspect which is emphasized and established early on by the appearances of characters with rich and textured pasts. The adaptation’s attempts to capture this formal variety fall flat for the most part, with dreams seeming — at their most different — to exist as soundstages for characters to stumble through. At the end of the comic’s first arc, Morpheus returns Dr. Destiny to Arkham Asylum, where he is joined by a quintessentially Gothamite Scarecrow — yet another of the relative realities through which Morpheus travels.

Lyta Hall, former Fury, is perhaps the best prism through which to see what is lost in the adaptation’s approach. To a thirteen-year-old Jean, to whom Sandman was a novelty — a comic that wasn’t in the young adult section of the library? Sorted by the author’s name and everything? — Lyta’s history was a total blank, My first read-through, I’m certain I thought she was a character created by Gaiman. What didn’t go over my head, however, was the feeling that Lyta was wrapped up in a story greater than she could understand.

Gaiman has been criticized for the trend of women in the Sandman being plot devices, and while there is merit to that, the series never loses a genuine sympathy for them. The show preserves the basic plot beats associated with Lyta. Lyta, played by Razane Jammal, is a widow; Her husband, still named Hector, remains a ghost living in a dream. He is eventually banished by Morpheus, who notes that since Lyta’s child was born in the dreaming, he will come to claim it one day. Lyta’s closer relationship with Rose Walker in the adaptation is seemingly an attempt to add more depth to her character, but it doesn’t do anywhere near enough to establish her as a tragic figure in her own right.

The image of Lyta stumbling through the dream dome, unsure of why she’s really there, is a haunting one, made more so by the sense of depth granted by the canvas of DC’s four-color universe. Lyta staring into the mirror, near catatonic, while her previous lives and personae flicker before her, a scene which appears in both A Dolls House and The Kindly Ones, is a brief moment that nevertheless wrings a sense of pathos out of the ever-shifting continuities. Infinite Earths have changed, but naught, in her melancholy, has budged. The “character who remains a constant despite continuity shifts” is by no means unique to Lyta, but rarely is it treated with the genuine care and seriousness that it is here. Every time I read these comics, it’s Lyta’s story which resonates the most to me, and gaining a greater appreciation of the ways in which she’s informed not just by her previous canonical adventures, but by the influence of preceding heroines has provided a really exciting sense of discovery on each of these revisits.

At the risk of venturing too far into speculation, I worry about the implications a shift like this has on the larger narrative. While Lyta’s past as the Fury is a plot point in the last volume, as it’s what connects her to the triple goddess, it’s a plot point which could easily be circumvented, and the comics explicit links to the DC universe lessen as it goes on. Yet what is less easily moved around is the pathos that Lyta’s comic book history lends to her role as a foil for Morpheus. If we view Morpheus as a fractured shard of the pre-Modern – a steady and uninterrupted story which is ejected into the postmodern, Lyta is the opposite, a character who’s backstory, parentage and relationships have been ever-shifting at the whim of more powerful storytellers. If Morpheus’ journey, mirrored in some smaller form in each of the book’s story arcs, is that of a character realizing that they are part of a larger story, Lyta emerges as a counter melody, a character whose response to the patchwork of erupting realities around her is only, can only, be a primal scream, one which disrupts the Endless themselves. It’s the invisible density of her time as the Fury that lends this tension its power; and it’s Gaiman’s allusive weaving of this history into her plot line allows that story to be told with a depth that simply starting from “scratch” lacks.

Rereading the series in light of the adaptation made clear how much the sense of a larger Universe works as a keystone in terms of the series’ work to establish and maintain the tapestry of narratives. Because of the shared universe, we see one door opens to the daring escapades of Scott Free and another to the haunted dream in which a former superheroine is drowning. Each of these doors, in turn, acts as a way in, vantages which reward rereading. The adaptation, in comparison, feels entirely uniform. Neither the visual language or characterizations make the kind of jarring shifts seen in the original comic. In doing so, the story loses the sense of being a messy but exciting tapestry of subjective stories.