The September 2017 release of Marvel Comics’ Marvel Legacy #1, by Jason Aaron, Esad Ribic, and a whole host of additional artistic talent, marks a significant purported turning point for the home of the Avengers, Spider-Man, and the X-Men. For all intents and purposes, Marvel Legacy is marketed as the comic that gets Marvel comics (finally) back on track.

The reasons why and how Marvel even needs to right the ship are up for debate (with some lunatic writers claiming they have all the problems conveniently listed out for your reading pleasure!). Nonetheless, the general consensus in comics is that during a time when DC Rebirth has helped Marvel’s Big 2 superhero rival find their footing, Marvel has stumbled aimlessly for two years.

2015’s Secret Wars remains – in my humble, yet mighty opinion – the finest Marvel event comic of the 2000’s (and perhaps of all time). Since that time, Marvel has simply been unable to find a direction that sticks, with the likes of All-New All-Different Marvel and Marvel Now 2.0 fizzling out into the ether to minimal fanfare.

Although Marvel Legacy #1 certainly asserts that the past does not simply lay quiet in the past, that’s the approach Marvel is hoping many take to their “new” line of comics. It’s the start of a new Marvel, and the perfect time to dive back into the superhero universe you may have abandoned, or been too intimated to start. 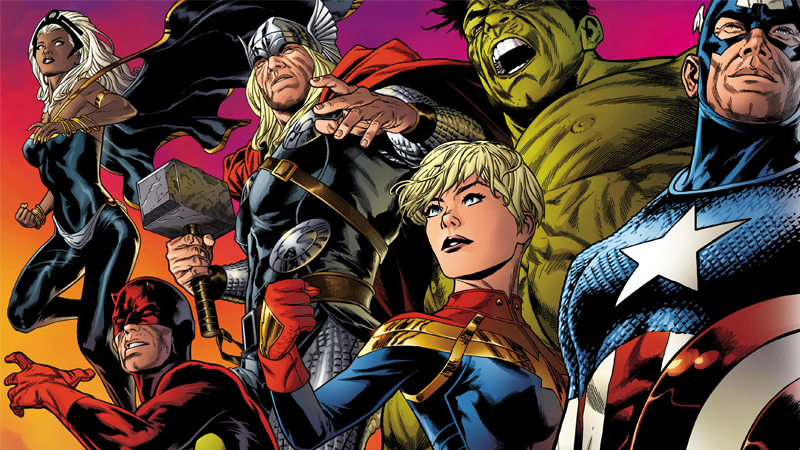 Just who are all these characters?

How did we get here?

What do I have to read to understand what’s going on?

Below you’ll find a guide to the history and comic book stories that shape the narrative of Marvel Legacy. For many, this will be sufficient information to plow forth like the dedicated reader you are. For others, I will provide plenty of contextual reading to go back and digest so you can enter the new line of Marvel with the encyclopedic knowledge you so crave.

*SPOILER WARNING — Please note that spoilers for Marvel Legacy #1 follow, as I discuss the contents of the issue and how to better understand the narrative within. *

This is a new development for Marvel Comics, but it’s not unfamiliar territory for comic book readers.

On the other side of the fence, Grant Morrison’s work for DC Comics has frequently run it back to the Stone Age. Cavemen play a prominent role in both Final Crisis

and The Return of Bruce Wayne

, delivering such notable scenes as Batman wearing a literal Bat-monster pelt while fighting Vandal Savage. The general effect of the setting, though, is to give a sense that the DC story spans the length of time – it is not confined to the mere present.

It should be no surprise that Aaron would try a spin on a Grant Morrison trick. Morrison is a clear influence on Aaron’s superhero comics work – Aaron is hardly alone in this as Morrison is a giant in the field – particularly Wolverine and the X-Men

and the debt it owes to New X-Men

Marvel also played with the motif of “revisionist history” throughout the 2000’s. Ed Brubaker’s writing from the period taps into the possibilities of reworking “known” Marvel history, from his resurrection of The Winter Soldier

to his damnation of Professor Xavier’s Deadly Genesis

(from 2006 to 2009) establishes a legacy of individuals who have wielded the power of the Iron Fist throughout history. Same goes for Jason Aaron’s time on Ghost Rider

” limited series. From Dr. Strange in New Avengers: The Search For The Sorcerer Supreme

, there are plenty of recent instances that let us know the original mantle-holders are not the sole inheritors of power.

The main takeaway from all this world-building is that most any superhero title in the Marvel catalog can belong to any individual, at any point in time!

Star Brand plays a major role in both the Stone Age and present day era of Aaron and Ribic’s yarn, raising some questions for new readers about the character’s backstory. Star Brand is without question the least well known of the Cavengers (and amazingly the only one without a TV / Movie appearance in 2017), so don’t feel like a total chump if you’ve never heard of him.

Star Brand was created in 1986 by Jim Shooter and John Romita, Jr. as part of Marvel’s short-lived “New Universe.” The full story of the “New Universe” line is much too unwieldy for this overview, but just know it’s exactly what it sounds like, a superhero verse separate from Marvel’s Earth-616. The Star Brand is an instrument that grants immense power to various wielders over time. The initial Star Brand series ran for 19 issues from 1986 to 1989, prior to cancellation and an eventual blending into the Marvel Universe.

, Avengers World, and “Time Runs Out.” His relationship with Nightmask in that series even led to an ongoing Star Brand & Nightmask

series that only lasted six issues.

As we find throughout Marvel Legacy #1, a hidden Celestial is at the heart of the Marvel mystery and Loki’s schemes. Celestial’s are similarly cosmic in nature and one of the more omnipotent beings in the Marvel cosmology. If you’ve spent some time reading Marvel Comics, there’s a decent chance you’ve bumped into the enigmatic Celestials, even if it’s only the severed head of one the Guardians of the Galaxy

The biggest thing you need to know about Celestials as they’re presented so far in Legacy is that they are some of the first beings to exist in all of creation, as described in Jack Kirby’s 1976 Eternals

. The scale of any story involving Celestials is always impossibly huge, and their involvement in Legacy suggests the beginning of man may only be a taste of how far back in time this narrative is willing to go.

One of the strangest developments in the post-Secret Wars Marvel landscape was the removal of the Fantastic Four from the playing field. The Fantastic Four comic hasn’t published an issue since 2015, and the state of Marvel’s first family is as follows:

Making sense of all of this goes back deep into Jonathan Hickman’s time crafting one of the best Marvel narratives of all time, but essentially what you need to know is the Richards family are “off-planet” and no one on Marvel’s present day Earth knows what happened to them.

As we find out at the conclusion of Marvel Legacy #1, the issue has been narrated by Valeria Richards, aka girl-genius, aka member of the Future Foundation, aka Sue and Reed’s daughter. It’s the first time – to my knowledge- we’ve seen anyone from the Richards family since the first volume of Al Ewing and Kenneth Rocaffort’s Ultimates

. Valeria is flying through space with her brother fartface… I mean Franklin… and there’s a strong indication that the Fantastic Four will be making their way back to the Marvel Universe proper as part of Legacy.

I’ve sprinkled plenty of reads throughout this recap, but I wanted to end things with a list of the comics that I think will be most helpful to readers jumping into Legacy #1. This will include both GIANT binge reads, and a few more targeted selections.

In part two, I’ll dive into the present day revelations and the return of a major Marvel character!