I know The Walking Dead has its fans, but for my money, there is no better supersized run of Robert Kirkman comics than Invincible

. While it doesn’t rewrite the rules of superhero stories, Kirkman’s passion for the genre crackles on the page. The ideas and characters beg the question, “How has nobody ever thought of this idea before?” The story of Mark Grayson becoming the young superhero Invincible isn’t a Watchmen-style deconstruction, but a celebration of all the goofiest parts of the genre. I was a big fan of the comic when it was coming out, and I’ve returned to it a few times since the series concluded in 2018. Even with all of that in mind, Invincible the cartoon is a major step up from the comic. 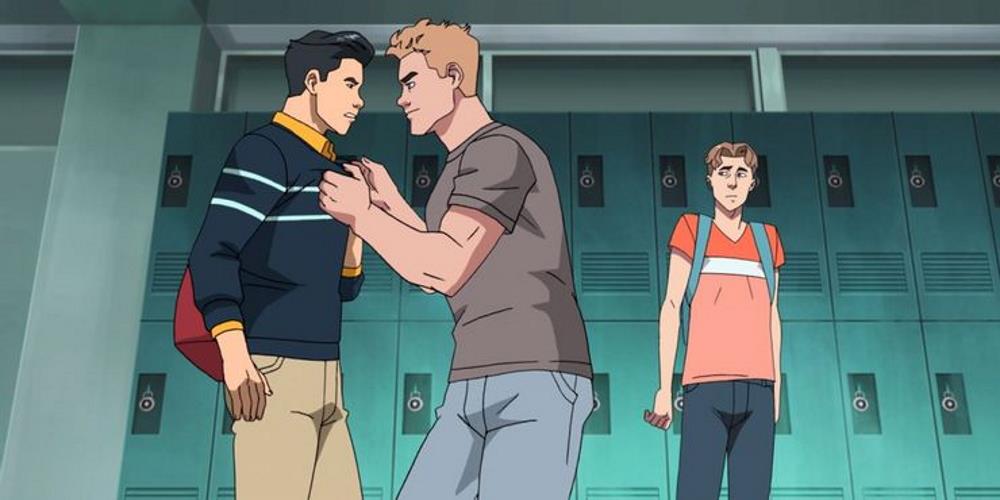 The most obvious changes happen in the name of modernization. It’s a little crazy to think about, but Invincible the comic started coming out in 2003. The first issue was on comic stands months before the US invasion of Iraq. It was a profoundly different world! As such, the show is filled with changes, big and small, that reflect shifting social mores.

Take for example the character of William Clockwell. William (never Will) is Mark’s best friend. And in those 2003 comics, he was as casually homophobic as only a millennial teenager could be. His first reaction to learning his best friend is a superhero is to ask to go flying. And his first reaction to that is saying, “Dude, this is so gay.” That sort of cringey “good-natured ribbing” continues throughout the run of the book. Mark even gets in on the action, performing a version of the dated “Do you know how I know you’re gay?” bit from The 40-Year-Old Virgin. Eventually, comics William comes out as gay himself, but the entire arc reads as pretty dissonant today.

In the show though, William is not homophobic at all. In fact, the adaptation changes the character in a pretty major way: TV show William is gay. And voiced by gay actor Andrew Rannells. This decision must have been intentional. Someone somewhere thought that making William a smart, three-dimensional gay character would balance the scales of making him a gay panic-spewing teen twenty years earlier. I am not prepared to say if their calculus was just or correct, but I do know that it makes me have a much easier time enjoying Invincible today. 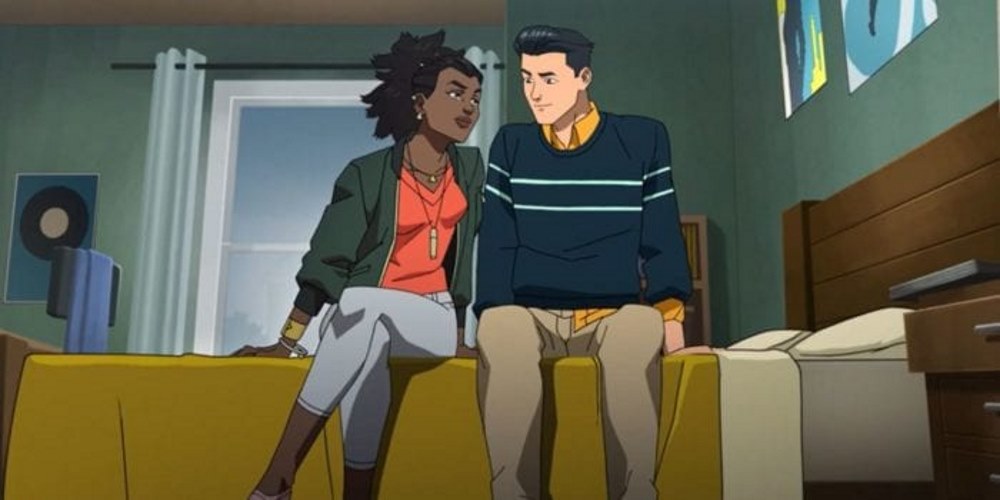 Another character who the cartoon tries to reform is Mark’s high school girlfriend Amber. One obvious change is to the character’s race: Amber was a blonde white girl in the comics, but in the show she is Black, as is her voice actor Zazie Beetz. Kirkman is a pretty good writer, and he gives a lot of weight to Amber’s feelings in the comic, but on the show she has much more impact. She’s a good friend to Atom Eve, and even inspires Eve to use her superpowers for public welfare instead of getting into fights. But most strikingly is how much more three-dimensional Amber feels in the cartoon. I’m sure opinions will vary, but I found that far from being a caricature, Amber is a compelling portrayal of a young social justice activist.

All of this is to say that the revamped take on the supporting cast adds a lot to the story. It would be one thing if the show struck up that uncomfortable tone that so many Disney movies like to inhabit—think the “girl power” scene at the end of Avengers: Endgame—but Invincible’s characters feel like full people, and the effects of the changes are felt throughout the show. In the comic, William is worried about the disappearance of his friend Rick because he’s a nice kid and, it is eventually revealed, he has something of a crush. In the show, William lost his virginity to Rick, and that makes for a much more compelling, funny, and sad story. William’s gay identity isn’t played as a twist, but as an essential part of his being. This is a series with big emotions and exploring the supporting cast is a great opportunity to put feelings at the forefront. 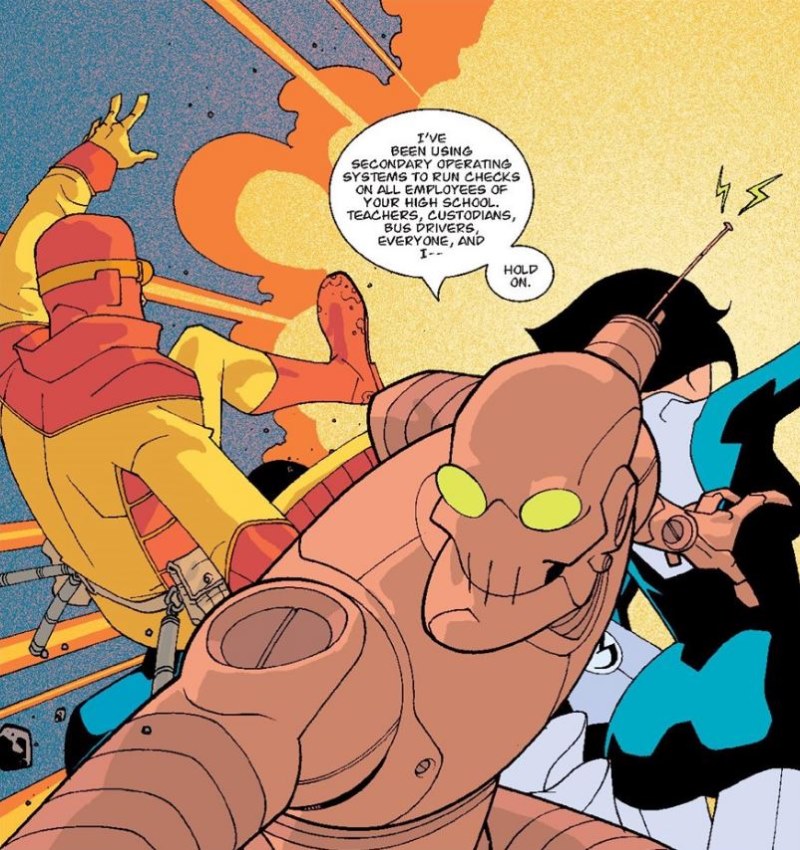 Another change pretty common to page-to-screen adaptations happens with the pacing. Stuff in the show doesn’t happen in the same order as it does in the comic. Part of that has to do with different concerns in different mediums, but a lot of it simply makes the story more engaging. The promise of Invincible was that you got a whole expanded superhero universe in one compact series. The comic often accomplished this by throwing a number of different stories at you. The murder mystery that makes up most of the first season of the show? That pretty much all happens in the second trade of the comic. But the show’s ongoing story about Robot and his mysterious machinations? That doesn’t get introduced until the sixth and seventh trades.

These sorts of changes are often dictated by the cast. Robot is played wonderfully on the show by Zachary Quinto. It would be weird if he only showed up in two scenes of the first season. If you are paying for Quinto, you’re gonna wanna include some Quinto. So moving that particular plot up makes a lot of sense to me. But more than that, these changes help spotlight the excellent ensemble, and give the core story a bit of room to breathe. I have friends who had never even heard of Invincible now calling me breathlessly to emote about Monster Girl or Rex Splode. A straightforward adaptation of the comic probably would have been less effective for those viewers.

At this point, it’s pretty clear that I would much more readily recommend the cartoon than the comic, but the latter is not without its charms. It sort of reminds me of Final Fantasy VII Remake versus the original Final Fantasy VII. The shiny new one is fantastic, but there’s a high level of craft that still makes the original work compelling to me. The Invincible cartoon is great, but I’m a comics fan, and nothing gets me more excited than a really well put together comic book.

One thing that struck me about Invincible’s early issues was how much it owes to newspaper strips. Decompressed modern comics often take five or six issues to tell a complete story. Invincible tells multiple concentric stories at once. There’s the ongoing story, and within that there are story arcs, but even within that, every page tells a story. In newspaper strips these stories are often jokes, and Invincible isn’t always funny, but it has a similar setup-punchline structure. 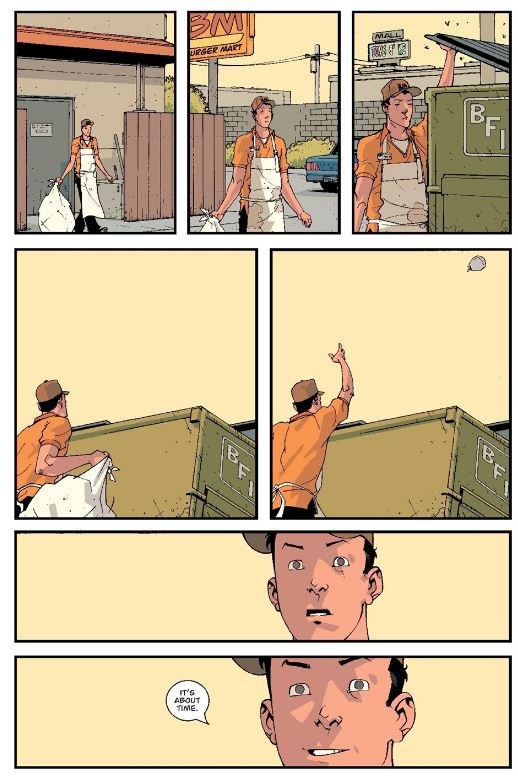 Take the page where Mark’s powers first manifest. It starts with a row of three panels of Mark taking a trash bag to the dumpster. His body language expresses boredom and frustration—this is an unpleasant routine for him. The next row has two slightly taller panels. The first is of Mark getting ready to throw the bag in the trash, and the second is of the bag flying off into space. The page ends with two long horizontal panels: one of Mark’s look of shock, and one of his grin as he says, “It’s about time.” The pacing, the panel placement, the panel sizes, all serve to draw the reader’s eye and to emphasize the beats of the little one page story.

Comic nerds will find a lot to like about how Kirkman and artists Ryan Ottley and Cory Walker put this book together. And I’d venture that even comics noobies would appreciate the craft, even if some readers might not be able to describe what they are responding to. I found the show to be pretty well animated—I especially liked some of the flying sequences. But if you are a comics fan above all else (after all, you are reading this on a comics site), maybe you’d appreciate a series of celebrated creators working at the top of their game.

Some elements of the book have aged poorly, and that’s a legit dealbreaker for some. Which is more than OK! The cartoon is giving Invincible a second lease on life, and bringing in a whole new audience. It’s making the story more accessible to more people, and that’s only a good thing. At the end of the day, the cartoon does a great job at capturing the best parts of the comic and has the wisdom to let go of the worst parts. All adaptations should be so fortunate.