You are here: Home / Featured / Infinite Frontier: The Next Batman – Second Son Review!

When DC’s Future State began, one of the biggest storylines was John Ridley’s Next Batman. It showed that when everything fell apart in Gotham, Jace Fox, formerly known as Tim Fox, took on Batman’s mantle. Future State: The Next Batman

was a good book focused on establishing the status quo of Gotham, and showing what kind of Batman Jace was. But Ridley didn’t make us care much about him. What Future State: The Next Batman was missing was character work on Jace himself.

comes in. The book focuses on Jace Fox and the rest of the Fox family as they figure out their place in a post-Joker War city. Bruce Wayne is no longer the wealthiest man in Gotham, as the Fox family has gained all his assets. Now Gotham’s first family, the Foxes have to contend with their new status in the city. While fleshing out the Fox family and focusing on their dynamics, the story finds a lot of interesting conflict. 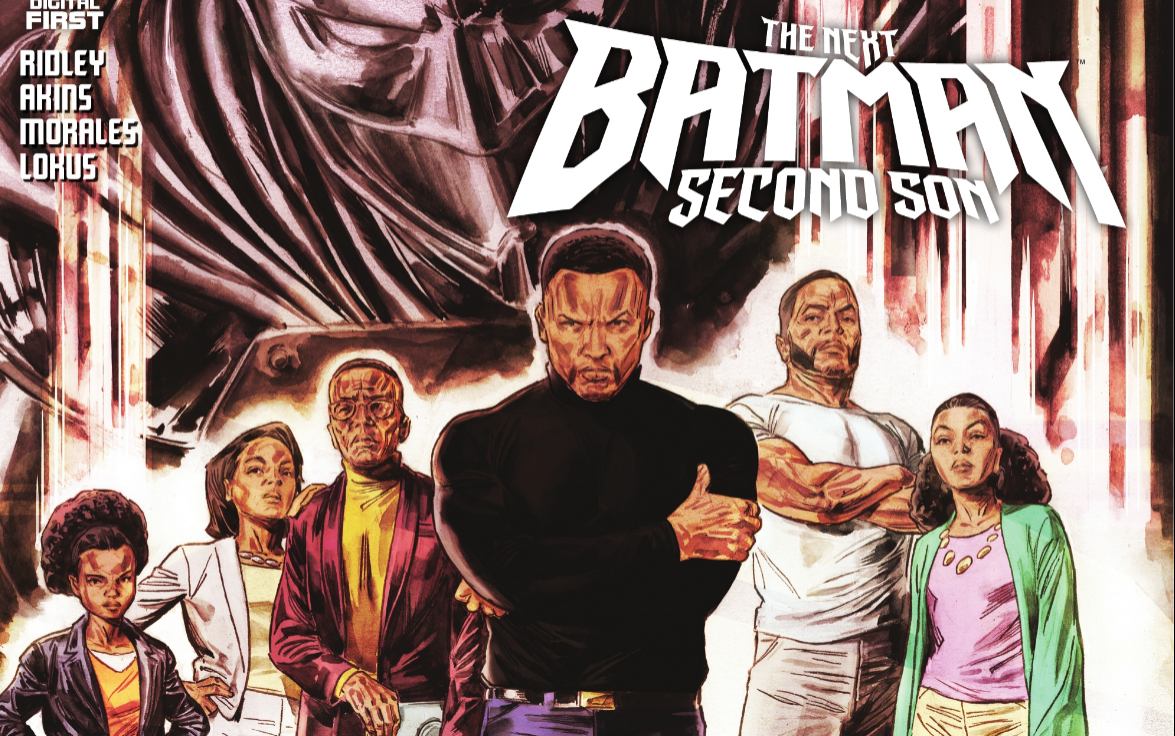 The center of the story is Jace Fox, a reformed man who’s gone on a mysterious transformative journey in Asia. He’s been tracking down Arkadine, a generic evil billionaire, and that search, alongside Grifter finding him, brings him back to his family in Gotham. As the titular second son, Jace doesn’t get much of a coherent story. Each issue gives him something different to do in a way that prevents a cohesive narrative forming across the four issues. As such, it’s hard to feel like we learn anything about Jace. In fact, the most we do learn comes from his interactions with his father about issues like his wealth.

These interactions with his father are some of the most compelling moments in this book, coming from the interplay of wealth and race. The family faces a unique dynamic of being incredibly wealthy and powerful, while still dealing with racism. For example, in one moment, when young Jace makes a big mistake, his father Lucius finds himself in a dilemma: they can either accept responsibility or use their wealth to protect the family. With the latter option, though, they have to use tactics that have been used to punish people of color for decades. Lucius Fox resorts to blaming the victim for his prior record and being an “alcoholic,” and weaponizes racial tension to protect his son — who is rightfully angry. When Lucius explains that he is “protecting people like us,” Jace responds “People like us? Do you mean black people… or rich people?”

Focusing on his core dynamic of money versus race is incredibly compelling. It reveals flaws in Lucius, a character who rarely receives significant depth in the Batman mythos, and sets Jace, who can see outside the bubble of wealth his family is living in, apart. While Lucius and Tanya spend whatever they need to maintain their reputation and status, Jace views their decisions as betrayals of the black cause and lifting up people of color. Ridley reveals that money is more important to defining values than race. 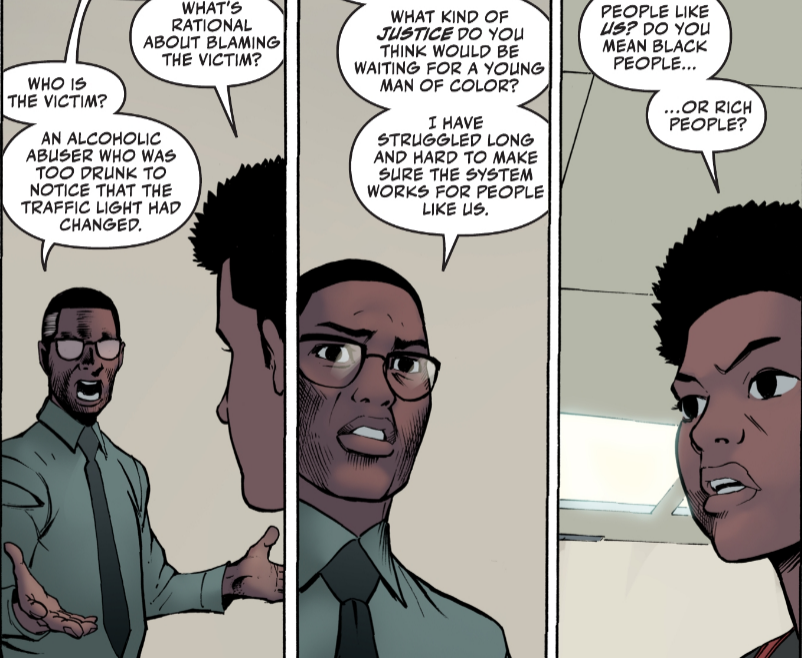 The Fox family dynamics, like the relationship between Jace and Lucius, separate this book from the rest of the Batman family. Characters like Luke, Tamara, Tanya, Jace, and Tiffany Fox rarely get to have storylines at DC and it’s incredibly refreshing to learn more about these characters. Each of them is different, from Tanya, a cynical, overprotective mother, to Tiffany, a sweet little sister to Jace. The characters have clear relationships to each other that really make the Foxes feel like a family. They aren’t afraid to blame each other or bicker, and yet it’s clear they still care about each other deeply. When Luke and Lucius fight over Lucius’s health, Luke wants the best for his father who struggles to accept mental health services. The family drama is for the most part believable and personal.

The exception to well written family dynamics comes from the way Luke, Lucius, and Tanya treat Jace, specifically when it comes to the use of Jace’s deadname. Deadnaming is a triggering issue for many queer people, and the fact that Ridley uses deadnaming as a plot point and a way to create tension feels gross and problematic. Deadnaming, especially when purposefully done, is equivalent to telling someone their identity isn’t valid, and that a person isn’t actually trans, nonbinary, two-spirit, etc. Even though Jace is not transgender, the decision to include this story element is completely unnecessary and results in language that is potentially triggering. By using a tactic that seeks to invalidate queer people as storytelling, Ridley creates an unsafe space.

Purposefully deadnaming someone is incredibly offensive because it invalidates who they are, and the fact that Ridley makes Luke do this to Jace is uncomfortable. Lucius and Tanya similarly deadname Jace in the book, and while it’s less gross than Luke’s deadnaming, it’s still deeply unnecessary. John Ridley made serious mistakes with his handling of this topic and, ultimately, shouldn’t even have included it in the story. The fact that he handles it poorly and tries to make it a big deal only pours salt on an already problematic wound. If you want to read up more on the impact of deadnaming on the trans and nonbinary communities, I strongly recommend you read Deadnaming A Trans Person Is Violence — So Why Does The Media Do It Anyway? by Sam Riedel and look at GLAAD’s website for more info.

While there are a lot of great moments in Batman: Second Son, there are a lot of ways the book struggles to succeed. From its choice of villain and general plot to problematic elements, the book has a bunch of flaws. Yet I enjoyed this look at the Fox family and am looking forward to Ridley’s I Am Batman, which released issue #0 last month. Hopefully, Ridley can keep what makes this book fun and compelling while addressing and fixing some of the book’s concerns.