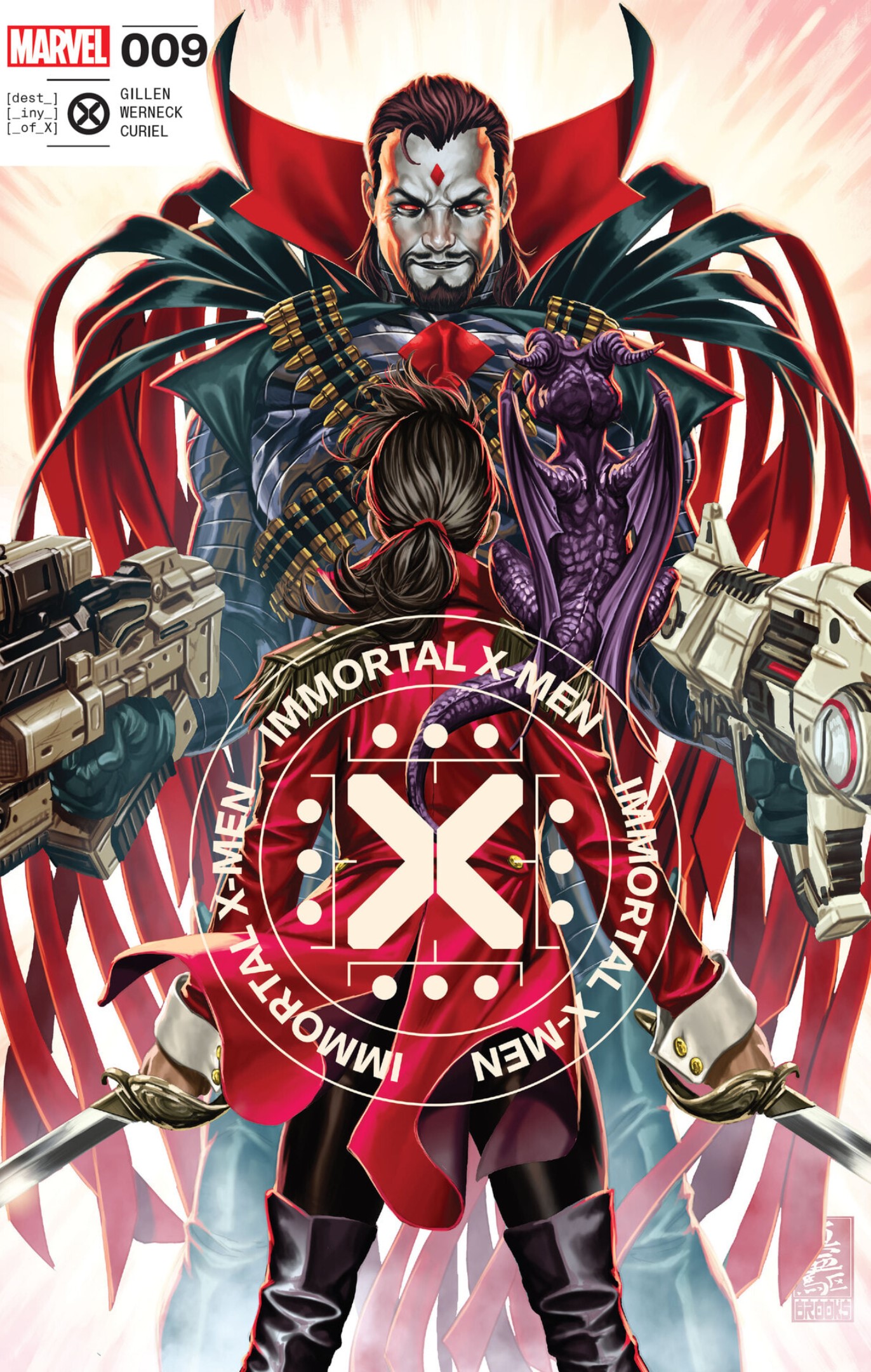 “The Lives of Moira VI”

My only frustration here is that, given the formal expectations of the rotating spotlight each issue, I expected Kate to do something clever with her phasing power to brush off at least Sinister’s tenth and final attack, even if that meant he escaped at issue’s end—which of course he does. But there’s absolutely nothing distinctive about Kate’s presence here in relation to the other councilmembers, except insofar as she gets to lead the surviving cast with her restrained righteous rage on the hunt for the finally outed Sinister.

Granted, they still don’t know about his secret Moira farm—but surely they’ll be paying his creep lair a visit now.

Even Sinister’s data page rating the threat level of various councilmembers shows how low he rates Kate, which I thought was set up for her surprising Sinister and getting the better of him. Nope!

However, Kate does get a brief moment to shine in her difference from the rest of the councilmembers when the issue opens on a council discussion of the merits of the Jean Grey-helmed Phoenix Foundation, which, per A.X.E.: Judgment Day Omega, will oversee Krakoan-sponsored resurrection for those humans deemed most deserving—primarily, the impoverished and those criminally underserved by human society. Now, one would think that would remind someone steeped in Christianity of who Christ valued most, but Exodus is, unsurprisingly, oblivious and disdainful. Kate’s calling him out on this here clearly emphasizes Exodus’ righteous apostasy in becoming a haughty religious extremist in the name of mutantkind alone (and really mostly just himself and the version of Hope cast by his mystical infatuation).

But hey—stiff old Bennet is at least speaking more these days. Put that down to Gillen’s knack for transforming previously cardboard characters (see above all, of course, 2012’s Uncanny X-Men #1-3, “Everything Is Sinister”). Exodus is no longer the “silent” type, which can only be a good thing for story. 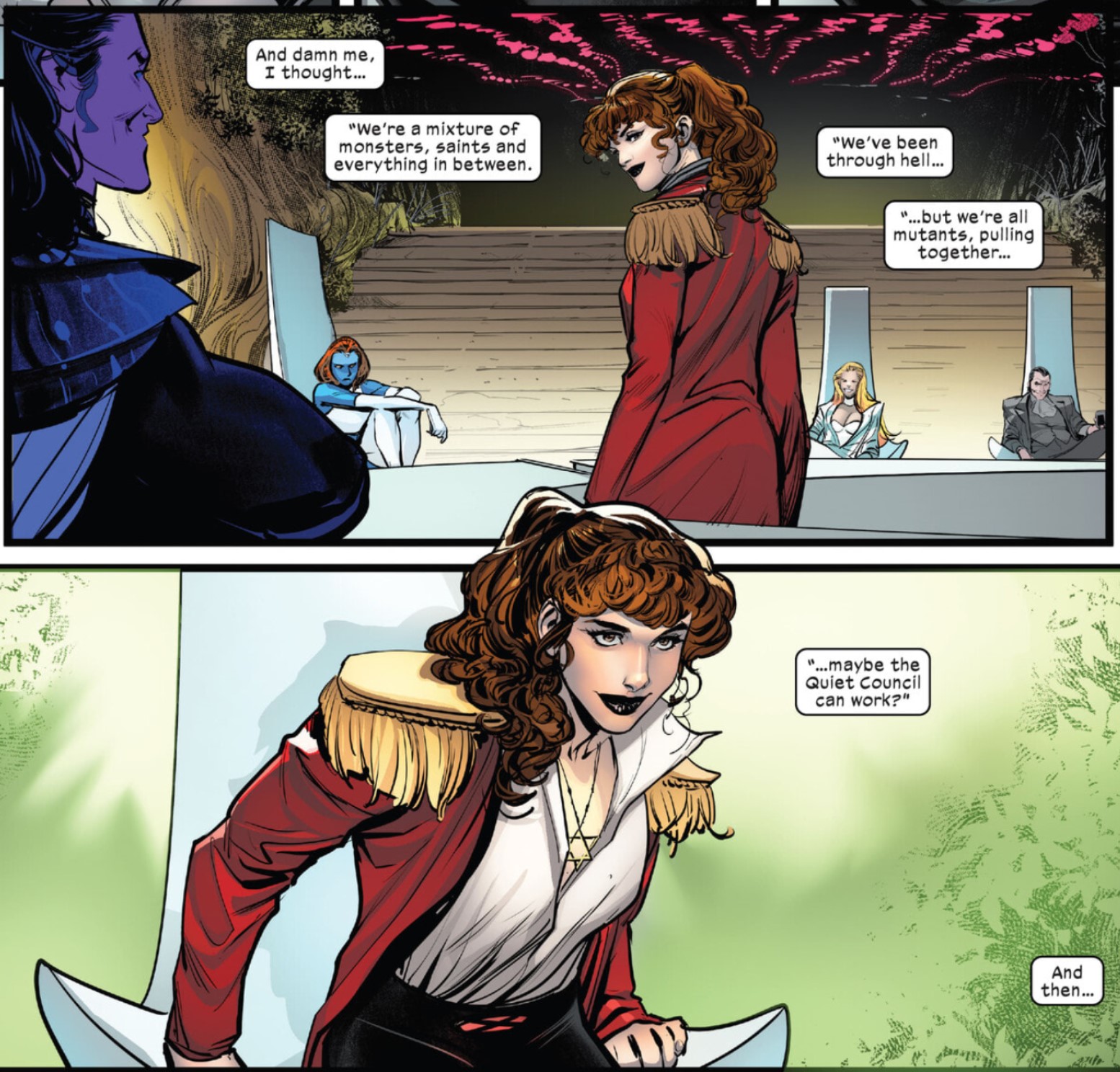 (Note in passing that the mystery of Kurt’s horn-y transformation is an ongoing plot in Legion of X.)

Destiny isn’t amused by Kate’s gibing—as she’s got wind of what’s up next for the council: Sinister entering ready to kill everyone, Hope first. But surely he expected Destiny’s disruption of his all too simple plan? 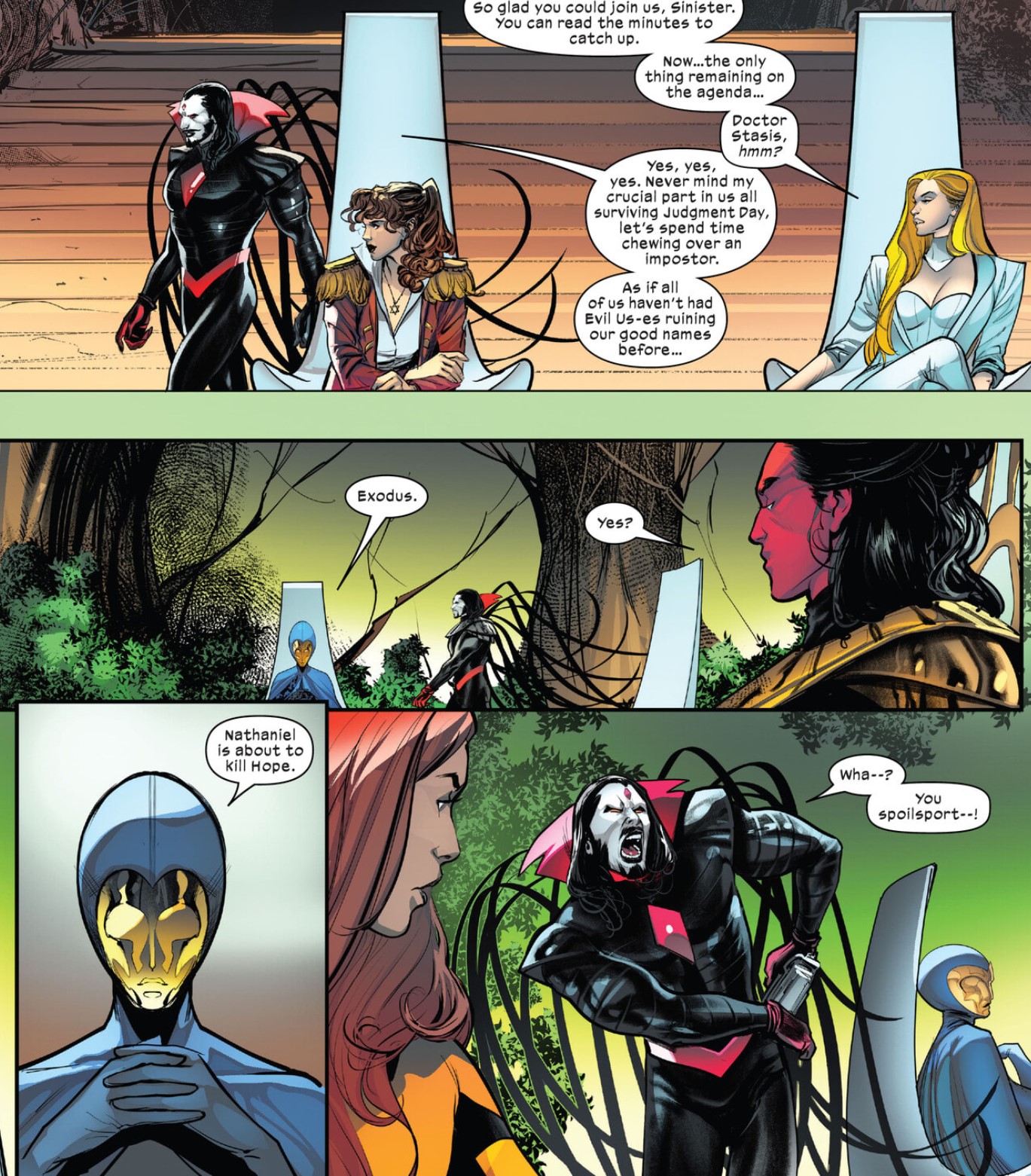 Now, we’re at the crux of the story this time: “The X Lives of Moira VI,” a play on “The Uncanny Lives of Moira X” (House of X #2)—but here, Sinister’s latest Moira clone for restarting the timeline at his pleasure is the sixth of his attempts, which actually means 10 resets per clone. The rest of the issue will see him churn through the current clone’s remaining nine lives! Set to die each time Sinister himself is compromised, which happens repeatedly, well, until the last one actually.

So, let’s make that clear: This issue alone, Sinister apparently literally restarts the entire Earth-616 universe nine times! By the end, we’re at Moira VI.10. (VII has already been prepped.) 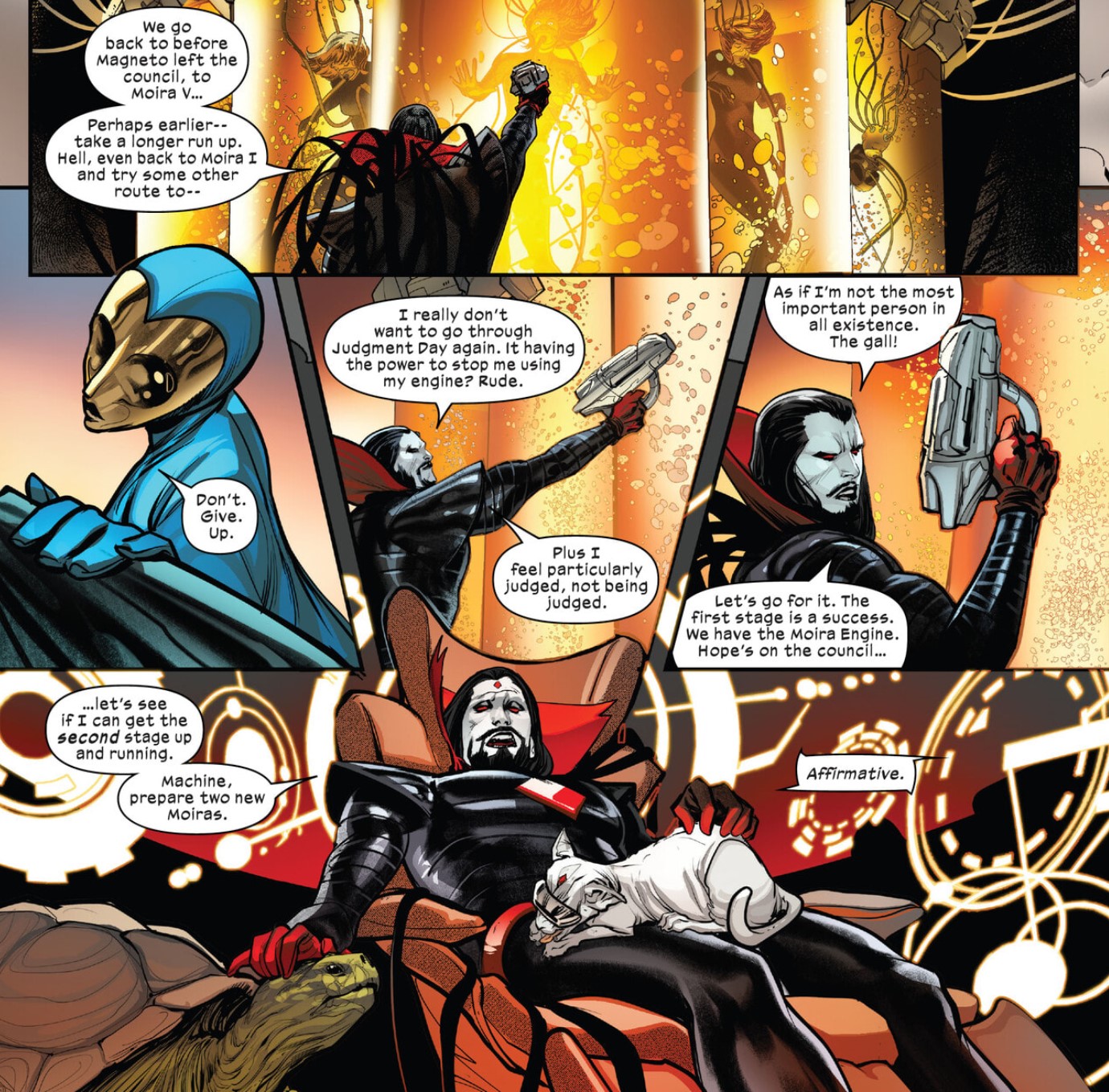 Sinister briefly acknowledges the strain this must be putting on the (Marvel) universe’s (Swiss cheese) reality.

However, while we already know that each Moira iteration resets reality only to a specific point (her birth), these Moira clones are programmed by Sinister, as he helpfully clarifies to us here, to reset to a time of Sinister’s choosing—save points, basically! In this case, with Moira VI, it’s to a moment at the start of the current Council meeting. Also, his memories download into the Moira clone each time he hits the kill-switch, allowing this record of the previous timeline from his own perspective to carry forward. 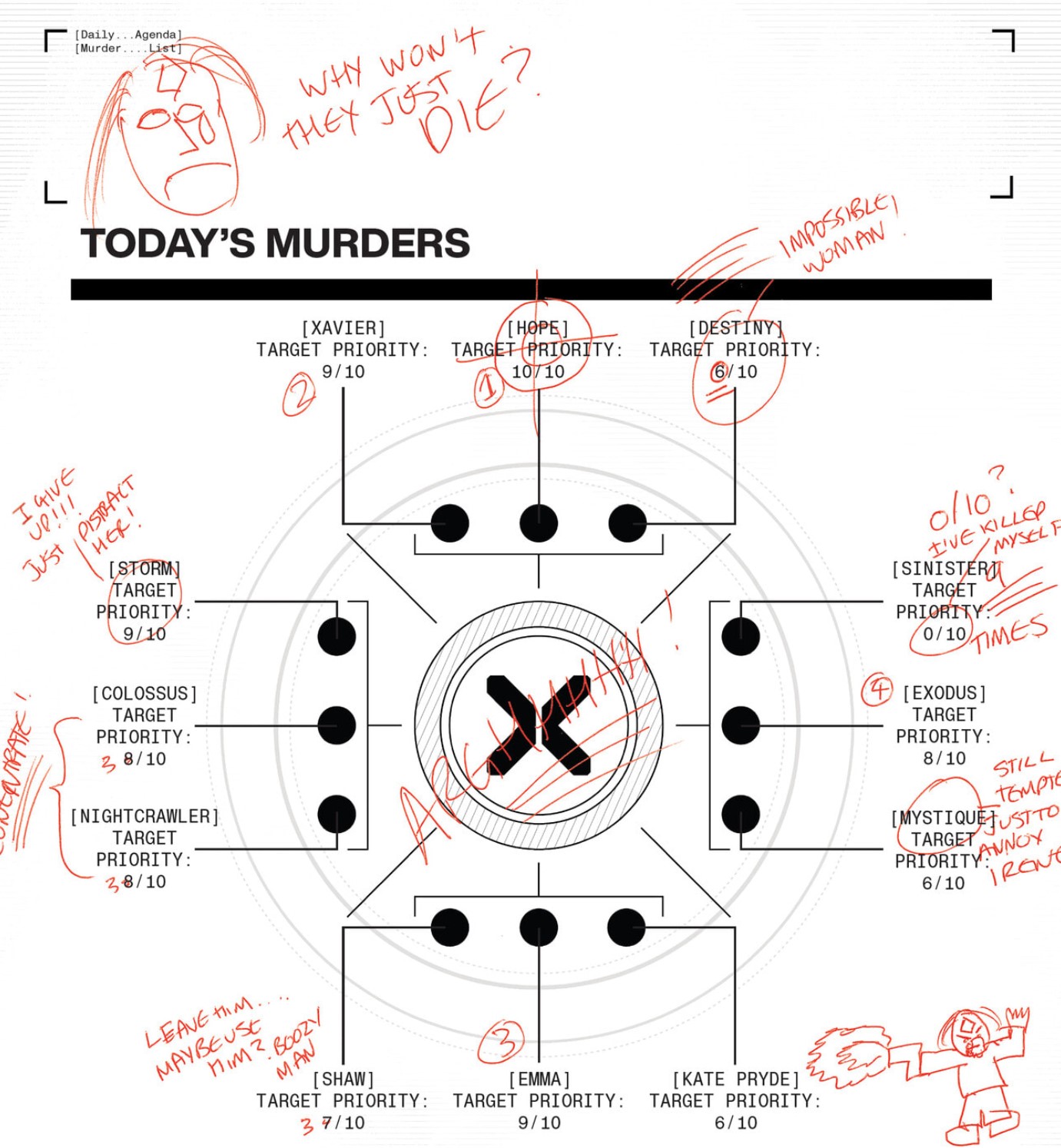 Notably, Sinister’s target scheme for the Council does not include Doug or Krakoa, who are conspicuously absent. Issue #10 promises a baddie going to the Pit—Will it be Sinister? Has his plan been to get himself sent into Krakoa’s bowels? What nefarious byzantine plot has he kicked off?

We are, after all, on the threshold of “Sins of Sinister”!

Stepping back to a slightly earlier moment, we see Sinister and Destiny meeting privately. This is after Judgment Day, and the scheme they’re referring to isn’t anything from the deep past, apparently; it was simply their ploy to manipulate the Council into attacking the Progenitor (while downplaying the risk to Reykjavik). Of course, the attempt turned out to be a simulated illusion cast by the Frankenstein Celestial.

It seems that Destiny continues to desperately believe that Sinister might play ball, that after a century plus, they “must be on the same side.” That seems a little ridiculous at this point, Irene! (Especially for someone who’s supposed to have been the genius behind Sherlock. 😉)

As to the Progenitor not judging Sinister, which we see here is offensive to his own gloating self-importance, he might be trying to avoid the suspicion that Stasis really is the original Essex and himself as a system merely a clone (which is, after all, pretty rich considering his sadistic history with clones!)—but it seems, according to issue #8, that the four Essex iterations are all copies. (In other words, while the current Sinister we see any one page is clonal, Sinister’s is the controlling and originating mind, he believes, of Sinister-as-system: But what if he’s not? What if he’s not his own god? What if he’s not in control? Well, of course he isn’t! Because Destiny has his number…)

In any case, it’s a bit unclear why Sinister is choosing to off the Council now, why Hope is his top target and why he isn’t going after Stasis first since that’s what’s annoying him most prior to his attempted massacre. However, he clearly has begun to fear that Destiny has played him and is now many steps ahead of him and essentially puppeteering him—rather than vice versa. So, why hasn’t she sought to definitively kill him yet? Perhaps she needs him to ensure Mystique’s survival (recalling that none of Destiny’s visions have given her a future for Mystique)? And isn’t it strange that after being so insistent about Hope’s membership that now he wants her dead? Maybe she’s just easier to get at here—but that seems quite unlikely. Regardless, he certainly doesn’t need her alive for his version of “resurrection.” Does he plan to rule Krakoa himself? What are his next steps and is he already prepared? 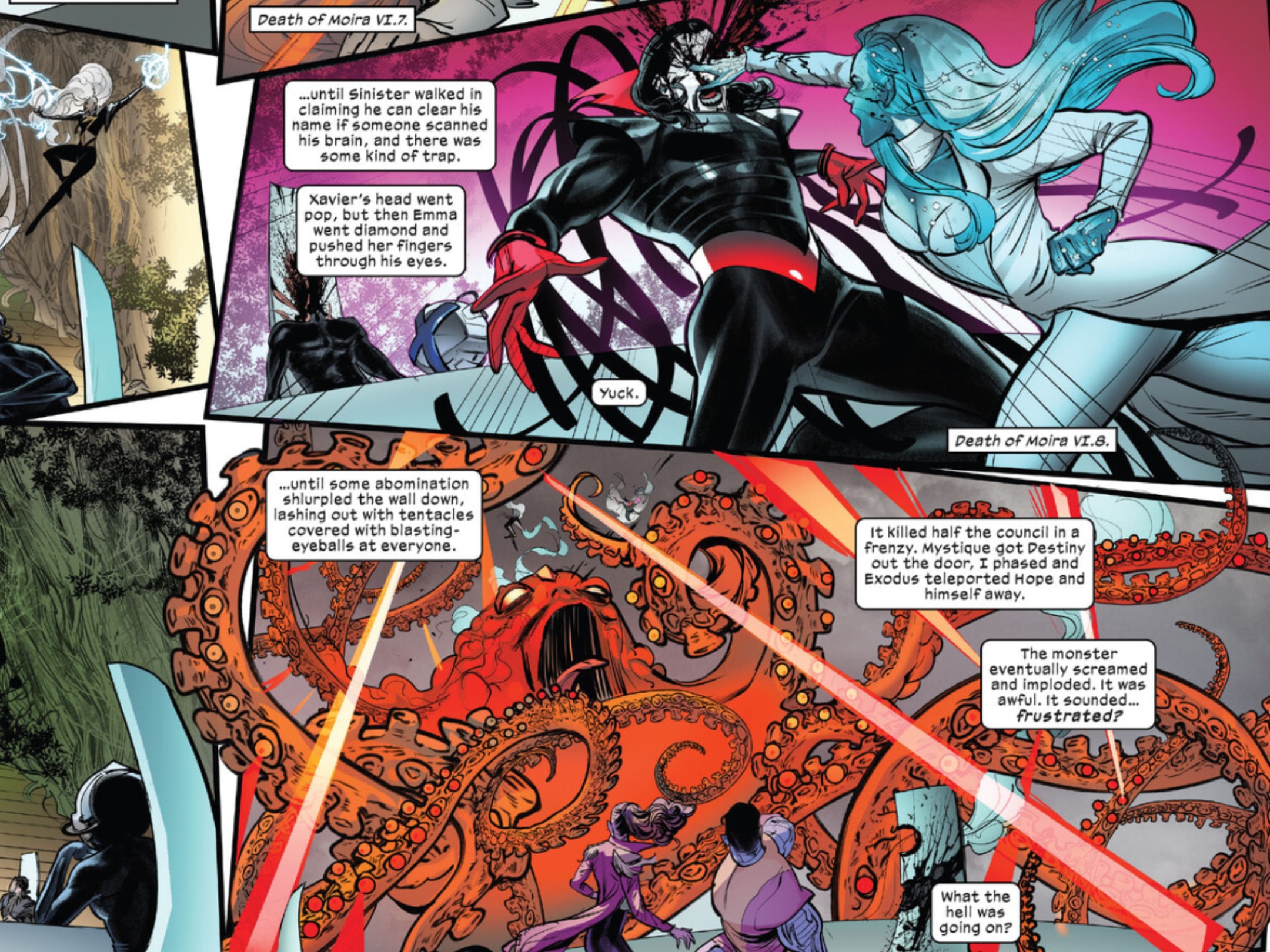 Well, perhaps he is! After all, we have one more issue (where, who knows, Kate may prove effective)—and then it’s “Sins of Sinister” time.

In fact, each of the Sinister Secrets from Immortal X-Men #1 map on to the corresponding issue, and tenth is: “Finally! Someone who actually deserves it gets thrown into the Pit. Good riddance.” Well! Okay, now, this could be Sinister—but it could also be the recently arrested Beast (see the latest X-Force). Maybe Xavier? Nah, that would just be too good.

(Actually, issue #1’s secret 12 certainly looks like a message from Sinister in the Pit. Who knows! Plus, there was an Inferno #4 variant cover showing him getting hauled into Krakoa’s bowels. It was literally called the “Foreshadowing” variant, lol.)

Anyway: another delightfully nasty surprise: The Dark Beast has returned! As a captive of Sinister. A head in a jar (since Illyana chopped his head off toward the end of Rosenberg’s Uncanny X-Men run). Hilariously, he’s framed as no longer the evil shadow double of Earth-616’s Hank McCoy—because that guy is full-on evil now. 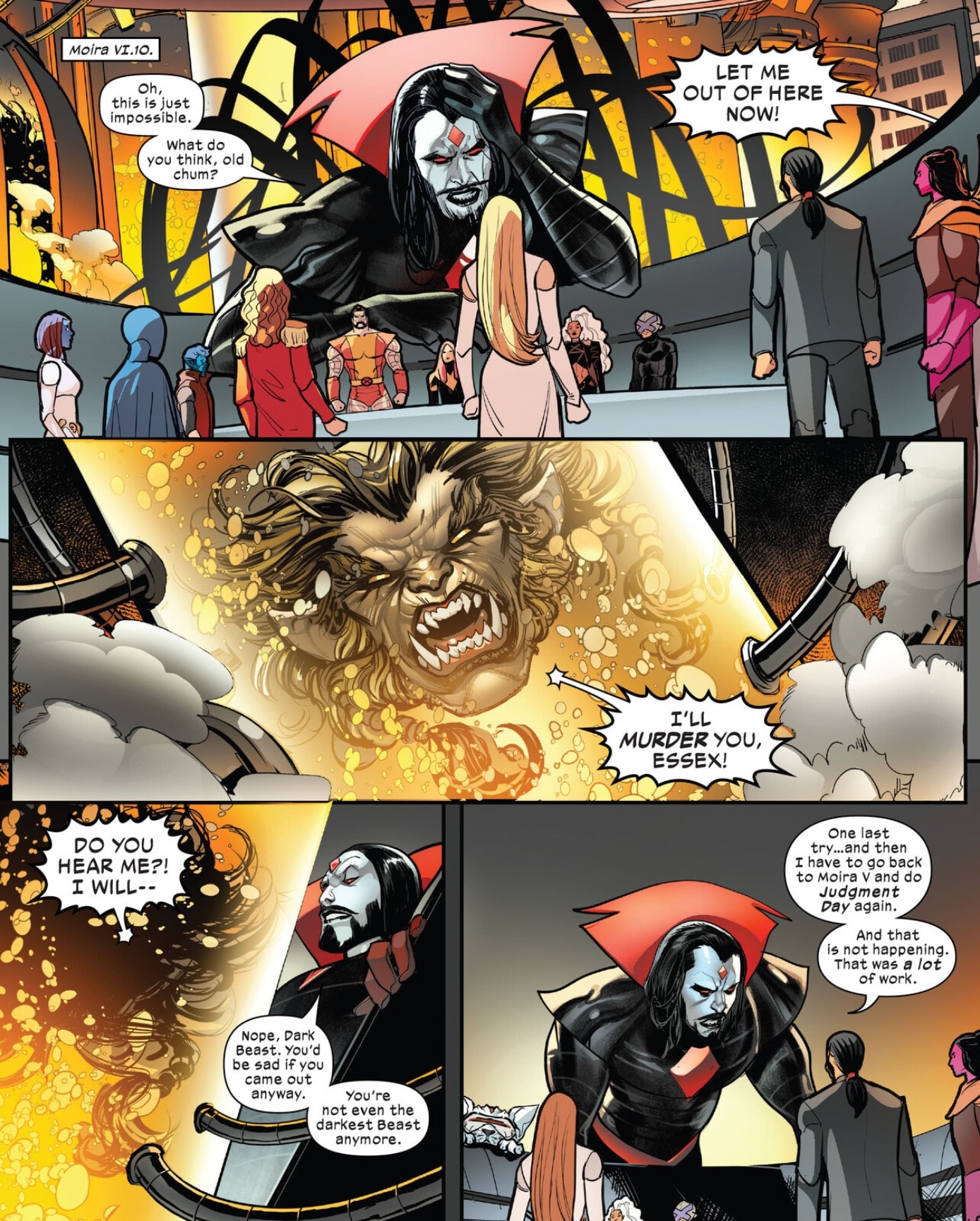 Other minor delights include Sinister’s sampling of known mutants’ DNA in his attacks on the Council (Unus and Boom-Boom) and in expediting his Moira Engine (Velocidad). (Does any of this, however, top his potential future self’s Shaw-skinned spaceship?) 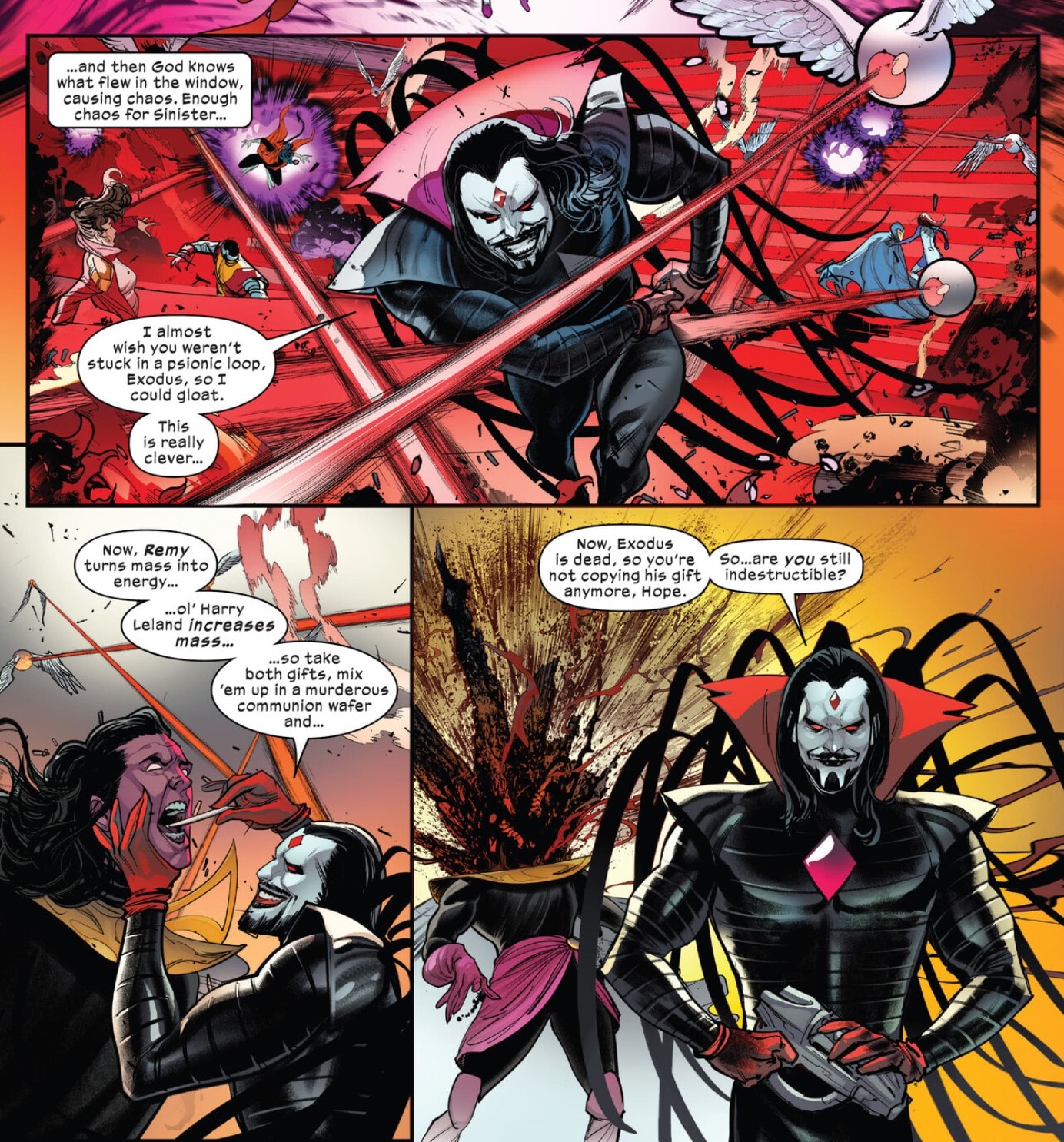 Anyway, it still would have been nice to see Kate do something more than go from feeling her oats to just looking righteously pissed while covered in gore—there was no real arc for her in her supposed spotlight issue. 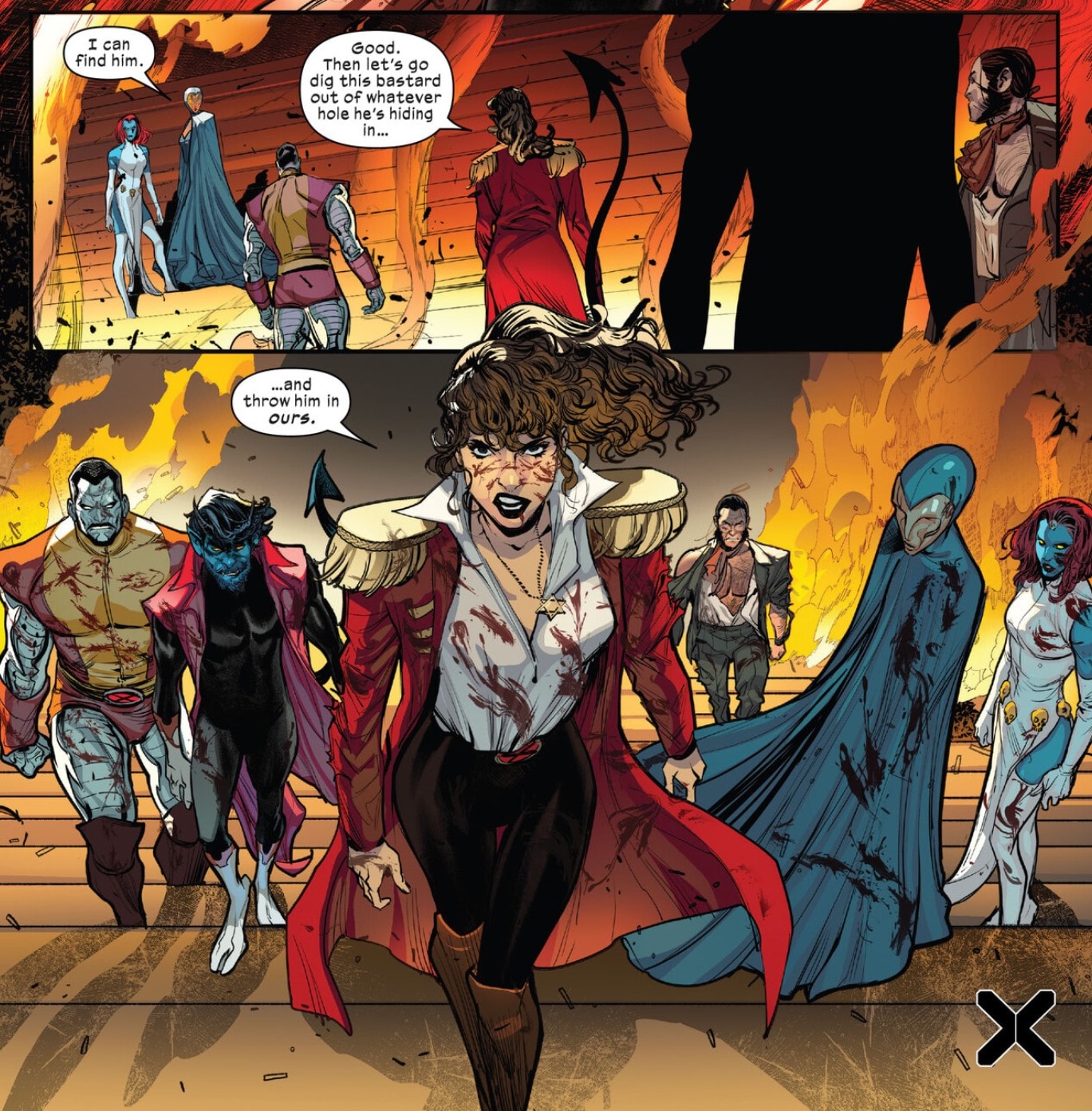