It’s the second part of this goal that very much seems at odds with the first. If Marvel is making a concerted effort to return to the elements their long-time fans loved – the restoration of “legacy” numbering is the most surface-level sign of this – then they’re also demanding that new readers come to the comics ready to play.

Iron Fist #73, the first Legacy issue for Danny Rand aka the Immortal Iron Fist, is a great example of just how challenging an ask this can be for a creative team. The issue by Ed Brisson and Mike Perkins is steeped in both recent and longtime Iron Fist continuity. Near endless story and deeply immersive continuity is *a part* of what I love about comics – you can dive in to these universes and never run out of history to chew on – but it is a bewildering ride for new readers.

Most jarringly, Iron Fist’s “Legacy” is heralded as “Sabretooth Round Two.” Naturally this implies comic fans are intimitately familiar with Round One, which is a dramatic reach to say the least. Technically speaking, longtime Wolverine archnemesis Sabretooth actually debuted in Iron Fist #14, written and drawn by all-time great Uncanny X-Men team, Chris Claremont and John Byrne. 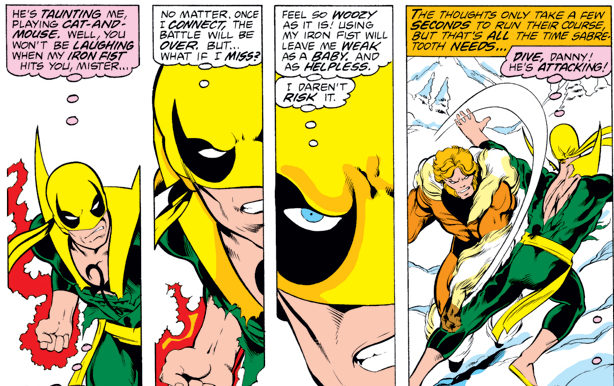 This is without question a cool bit of trivial pursuit, but as callbacks go, it is not one that lingers heavily in the fabric of the Immortal Iron Fist since that 1977 publication. Brisson and Perkins do their best to allude to a shared history between these characters, though, as Iron Fist seeks Victor Creed’s help in dealing with an apparent break-in to his facilities by the Constrictor.

In addition to this odd launching pad, Iron Fist #73 also calls back on both Sabretooth’s relatively obscure transformation to a good guy during 2014’s trainwreck of an event in Axis, as well as recent events of Brisson’s run on Iron Fist. The expecation of Marvel Legacy *should* be that series carry on with developments from earlier in their runs, but again, if this is the door you walk into, it’s sure a stunner to see Shao-Lau the Undying sitting on Danny Rand’s living room floor.

Since Ed Brubaker, Matt Fraction, and David Aja’s work on Immortal Iron Fist, the legacy of K’un L’un’s protector has been one of the most fascinating legacies in the Marvel Universe. Brisson and Perkins do play with that here, introducing a related sect operating in the past.

Ideally, this gets more play moving forward than Iron Fist connections that don’t quite fit. As it stands, this is an odd starting point for Iron Fist’s legacy.

Iron Fist #14 by Claremont and Byrne

Iron Fist by Brisson and Perkins