growing up and feeling extremely excited as Reed and the crew met the Impossible Man. Who was this wild and wacky Green Gazoo lookalike? What did he have in store for the Fantastic Four?

Turns out the Impossible Man was primarily there to make funny noises (score!) and recap the story so far (aw what the heck!). The initial excitement quickly muted into the disappointment that comes from a rewind rerun episode. Sure, they framed the episode like it was new, but… I’ve heard this one before.

That disappointment is mirrored in Power Pack #63

, the one-shot return of Power Pack that… retells a story from their past. 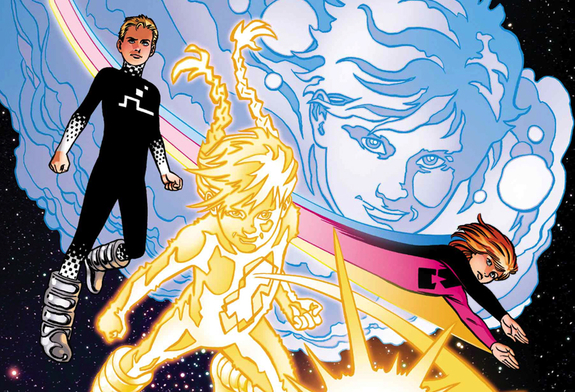 Power Pack have a unique place in Marvel history. The superpowered family (all kids, no stinkin’ adults) thrived in the 80’s under the creative tutelage of Louise Simonson. Because of Simonson’s close working relationship with X-scribe Chris Claremont, the Power Pack are actually relevant and recurring players in everything from classic issues like Uncanny x-Men #195 to events like the Mutant Massacre.

The series ran from 1984 to 1991 before cancellation and now almost thirty years of one-shots and one-off appearances. The likes of Alex Powers found a home in Jonathan Hickman’s glorious Future Foundation

, but for the most part, Power Pack have remained a cursory oddity lodged in Marvel’s past. If you’ve come to comics any time after the 90’s, there’s a reasonable chance you’ve spent little to no time with the family Powers.

I can understand the urge from Marvel then to ground new readers in Power Pack’s history and dynamics. There absolutely is a need for exposition, and information, particularly in regard to where these characters even ARE today (none more so than Alex Powers, lost in space with the FF).

Unfortunately by spending a majority of story recapping an old adventure, we learn next to nothing about the current state of Power Pack. Marvel is completely lost in the Legacy, when the initiative is meant to use these established legacies to power new stories forward.

Since this is a one-shot, there’s a strange and vague call to action at the end of Power Pack #63 for readers to let Marvel know if they want more Power Pack. The issue does almost nothing to drive feelings of any sort, though, and because it feels like a rerun, it’s a challenge to tell if the creative team has anything to bring to the team to begin with! Theoritcally, I’d like to be on the front lines of a strong, fresh creative team trying to launch a new Power Pack series. But where is the pilot issue of that series?

This all leaves me particularly concerned for remaining one-shots in Marvel Legacy. These issues should feel like creator tryouts, with inspiring and innovative attempts to fuel reader passion. Unfortunately Power Pack #63 just doesn’t come close.