It’s a weird thing to try to apply a “Marvel Legacy” to characters that have been around for approximately one hot minute. Spider-Gwen isn’t the most recent addition to the Marvel Lineup, but she’s certainly a modern development, extending from the success of her alternate reality creation in Spider-Verse.

As such, the Gwen Stacy imbued with spider-powers from an alternate universe, simply doesn’t have the back catalog to justify the “Legacy” approach of Marvel’s full stable. This even feels true for some of the characters that *have* been around for a while, but Spider-Gwen #25 is simply a continuation of the saga creators Jason Latour and Robbi Rodriguez have been working on since 2014. 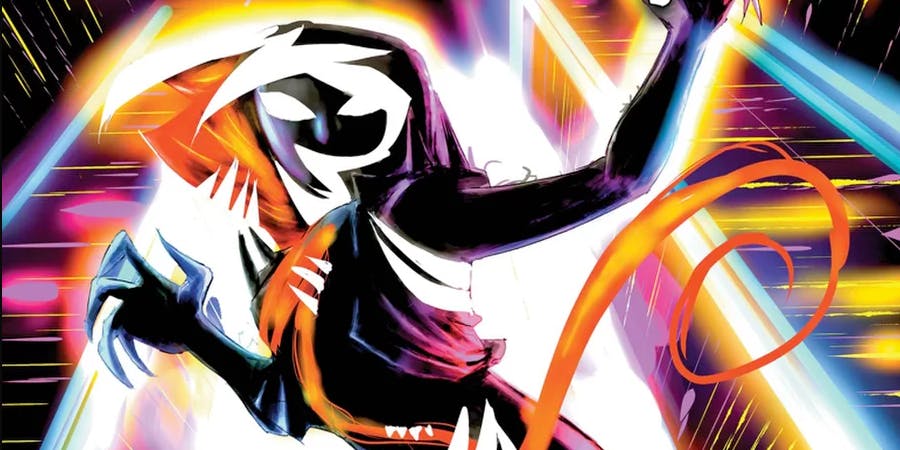 As such, Spider-Gwen #25 will not make a lick of sense to new readers or anyone interested in starting with the character with the “Legacy” initiative. There’s really no use pretending; this is just the next issue of Spider-Gwen with a new branding label slapped on the cover. The story makes slightly more of an effort to explain how we got to this point, but otherwise procedes uninterrupted.

To that end, Spider-Gwen has been one of Marvel’s more interesting superhero books for the past three years, and for my money a better read than Amazing Spider-Man. If you’ve been keeping up with the saga, you know that Spider-Gwen #25 does mark a significant development for the series, as Gwen reacts to the death of another loved one, and simultaneously seeks revenge using her universe’s Venom suit.

In a lot of ways, Spider-Gwen’s thrill mirrors Marvel’s Ultimate Universe, recasting the elements of Spider-Man’s history in new shades. As such, the Venom suit is bestowed upon Gwen by Matt Murdock – the Kingpin of Crime – integrating extensively with the series so far.

All in all, Spider-Gwen #25 is a milestone issue for Gwen, and signals a downward descent new to the character. The reality, though, is you’re much better off catching up on Spider-Gwen in Marvel Unlimited than you are jumping in for Marvel Legacy here.