.
You are here: Home / Featured / Hydra Reading Order – The History of Hailing Hydra

Ever since Captain America 2: The Winter Soldier hit the Marvel Cinematic Universe in 2014, and Secret Empire turned the Marvel Comics universe upside down, Hydra has become the most well-known fictional crime organization this side of Star Wars’ Empire.

Hydra has a long comic book history dating back to the mid 1960’s Strange Tales #135, with many iterations – including, yes, full-blown Nazism – and extensions of the would-be world conquerors ever since.

Below you’ll find a guide to all the essential comics detailing Hydra’s involvement in the Marvel Universe. So cut off one limb, expect two more to take its place, and yes, Hail Sore Shoulder Muscles! 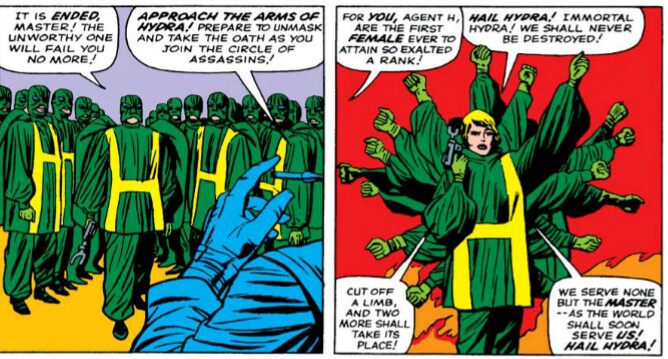 Like a large proportion of concepts in the Marvel Universe, Hydra spins from the creative partnership of Jack Kirby and Stan Lee, with a SHIELD vs. Hydra storyline carrying through Strange Tales #135 to #139.

These early issues of Strange Tales deliver a shocking amount of introduction for Nick Fury, SHIELD, and of course, the many limbed green & yellow hordes.

At this stage, Hydra is clearly mirroring James Bond’s anonymous secret spy antagonists, without much motivation beyond ruling the world. They also unquestionably have the best synchronized hand motions in all of comics.

S.H.I.E.L.D. By Steranko: The Complete Collection

In addition to featuring Jim Steranko’s revolutionary 60’s art, the Steranko run on Strange Tales reveals Baron Von Strucker’s role as the leader of Hydra. This connects Hydra to the one-time Howling Commandos arch-enemy during World War Two, and means the former leader of the Nazi Blitzkreig Brigade is now fronting Hydra. 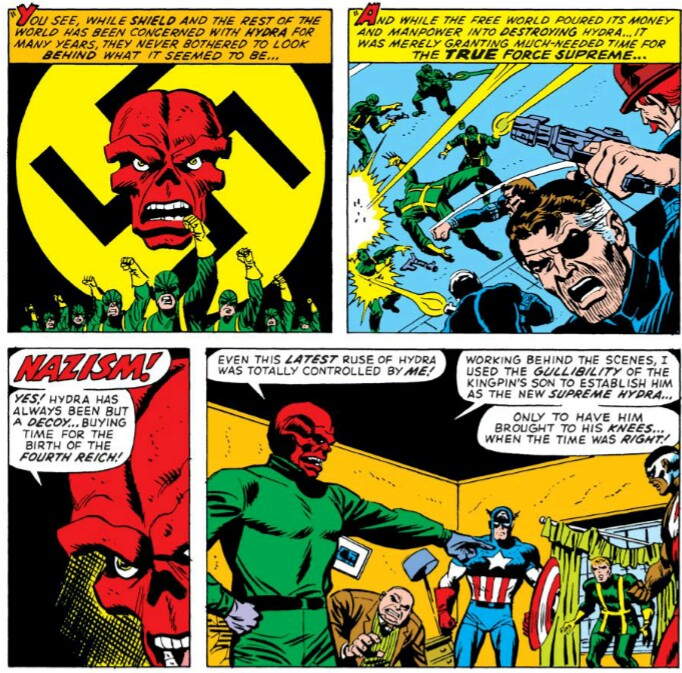 While Captain America #111 to #113 are strong early issues starring Madame Hydra, Cap #144 to #148 are the most essential of the bunch, revealing the Red Skulls ties to Hydra!

Cap #273 to #274 are much later, but bring back Baron Von Strucker and Hydra to attack Captain America once more! 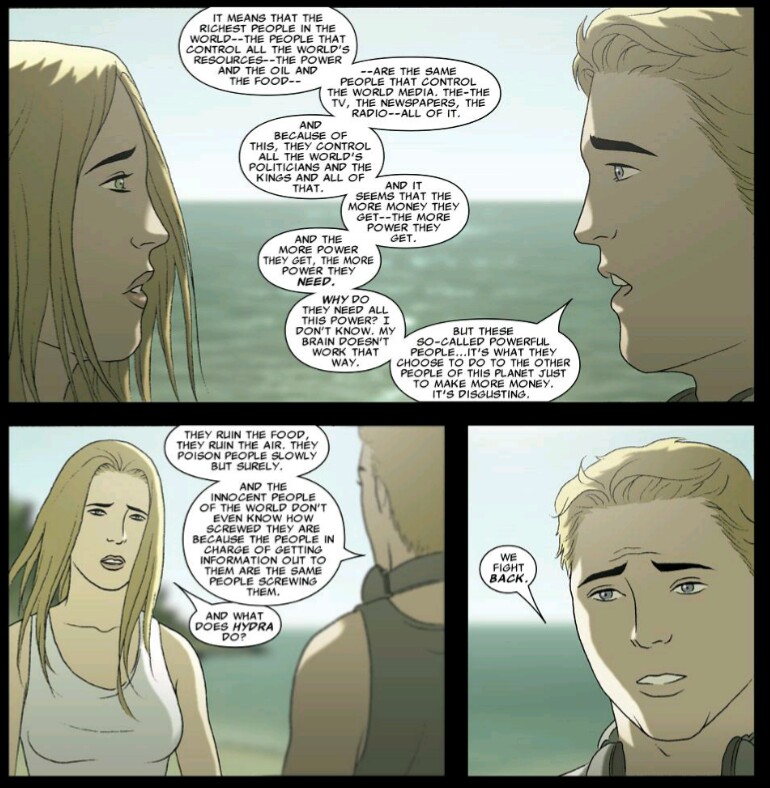 Hydra and The New Avengers

Once Spider-Woman was added to the New Avengers roster during the Brian Michael Bendis run from 2004 to 2010, her brainwashed childhood within Hydra became a recurring plot point.

The five issue Spider-Woman origin story is one of the better 2000’s examples of what it’s like inside Hydra, doing work to explain how an inherently good person like Jessica Drew could think she was on the right side.

Note that the short-lived 2009 Spider-Woman miniseries from Bendis and Alex Maleev is functionally a Secret Invasion epilogue, and will make more sense if you’re familiar with the event.

Wolverine: Enemy of the State

Hydra teams up with the Hand and the Gorgon to brainwash Wolverine and use him against the Marvel Universe! From Mark Millar and John Romita Jr, an essential 2000’s Wolverine read.

Secret Warriors spins out of Dark Reign to deliver the best SHIELD vs. Hydra story I’ve ever read. It’s also one of my favorite Marvel Comics of the millennium!

The series, which ran for 28 issues from 2008 to 2011, marks the start of Jonathan Hickman’s Marvel Universe which runs through 2015 Secret Wars.

SHIELD by Hickman and Weaver

Hickman continues to explore the ancient legacy of SHIELD and Hydra, here with artist Dustin Weaver. This is heady sci-fi spy action, so definitely only recommended if you already like Hickman’s writing and have a broad understanding of the Marvel U!

For good or ill, this will unquestionably go down as one of the most memorable moments in Captain America and Hydra history.

You should only read Captain America: Steve Rogers issues #1 to #3 prior to Civil War 2!

Marvel’s lackluster summer 2016 event does include important developments for the Captain America universe, particularly in the pages of Captain America: Steve Rogers, and Civil War II: The Oath.

As noted above, the majority of issues in these collections are part of the Civil War 2 reading order.

PETER PARKER SPIDER-MAN (WHO LEADS THE HORDES OF HYDRA?, NO.79