(We’ll get to the undead human supremacists pictured above in section VI.)

Last time we did a rundown of all the mutant villains freely stepping onto Krakoan soil in House of X #5. Except for Selene and Sebastian Shaw—so now we can segue (at last!) into a look at the roster of human/non-mutant baddies listed in HOX 4. Why? The Hellfire Club was once an exclusive domain of power-politics contention between elite humans and mutants; it’s seen its share of amoral mutants and humans whose cynical, self-aggrandizing politicking has often resulted in great harm to mutantkind. And even today, the question of the Club’s legacy could reignite.

Selene first appeared in New Mutants #9 (1983) and at 17,000 years old is the oldest known mutant*. Named after the Greek goddess of the Moon (or maybe the person who inspired that mythology?), Selene undergoes perpetual rejuvenation like her namesake—but only as long as she has a fresh supply of bodies, as she’s a vampire of vitality. Her mutant powers also include matter manipulation, telekinesis, hypnotism, and moderate telepathy. But Selene’s also had millennia to master dark magic. 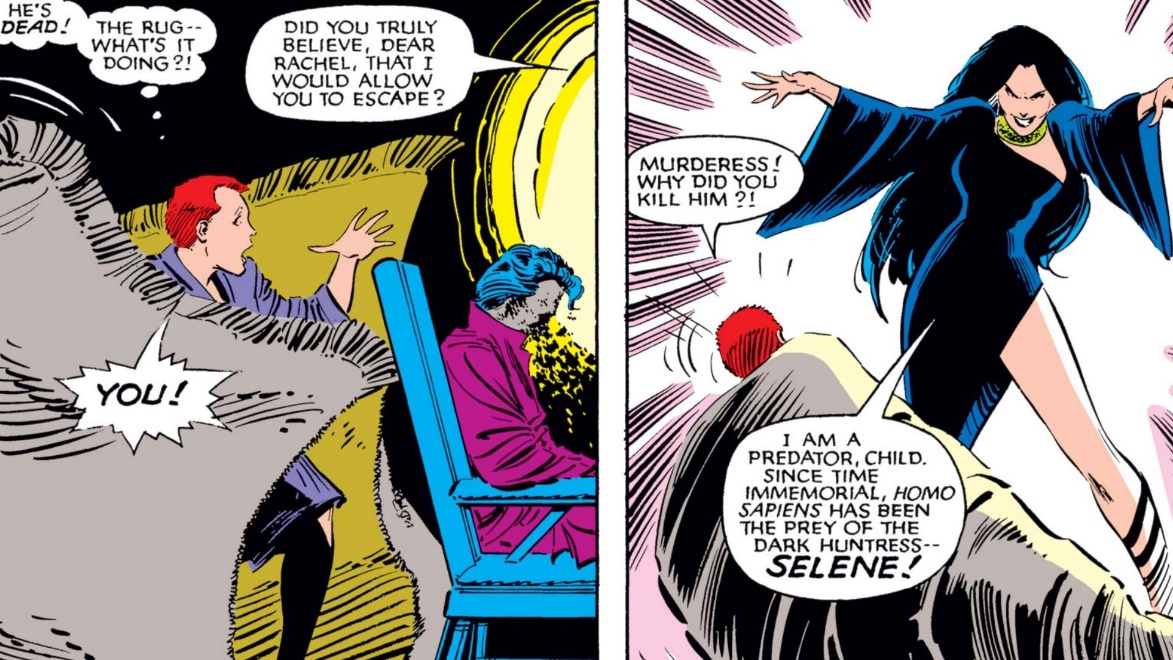 The horrors she’s committed are too numerous to recount here, but she’s known as a prime nemesis of Rachel Summers, who was kidnapped by Selene to be made into her disciple before the young mutant from the future even made contact with the X-Men. In the 21st century, Selene’s villainy’s been on fullest display in the 2009/10 Necrosha event, wherein Selene sought deification by way of mystically controlling a form of the techno-organic virus* fully programmed to her will and with which she resurrected millions of mutants from the wasteland of Genosha. X-Force defeated her in time, seemingly killing her—but all her atoms just reincorporated elsewhere. Most recently, she’s been a prime villain in Ta-Nehisi Coates’ Captain America, making her the most murderous mutant in the early days of Krakoa. It remains unclear at what point Selene was allied with the Red Skull for her own vampiric purposes in relation to her arrival on Krakoa.

*This material was harvested from the dormant body of Warlock’s Technarch progenitor, Magus, which Bastion and the Purifiers had discovered at the bottom of the ocean. (More on this below.)

Even more than the vampiric Emplate, Selene will have to be closely monitored. Further, if Sabretooth is in the pit for killing a handful of security guards—shouldn’t this immortal vampire be joining him??? Should that not be the case, the Quiet Council better have some rationale for why she too isn’t being punished to set an example. After all, Sabretooth’s fate doesn’t actually set a precedent if other murderers are allowed their freedom (here speaking only of those who commit murder following the establishment of Krakoa). To be clear, she’s eaten up the vitality of countless humans—but she prefers to feast on mutants; they’re just more sumptuous, I guess!

Now, although Selene was once Black Queen of the Hellfire Club, she’s no friend of Sebastian Shaw, whom she mocked and terrified—though he initially seemed happy with her offering up Rachel Summers and her own granddaughter (Magma) as brainwashed thralls. She also developed a rivalry with Emma Frost, the White Queen, whose memories of rebellion against the Hellfire’s Inner Circle were erased by Selene (though they were later recovered, at which point Emma’s vengeance against the Black King, at least, began in earnest). None of these people like each other, and now they all live on the same island!

Shaw first appeared in X-Men #129 (1980) as the Hellfire Club’s Black King and figurehead for ruthlessly self-centered neoliberal capitalism. Like any powerful neoliberal, he’s a hypocrite—allying with governments when it comes to lucrative contracts, in his case building Sentinels for the US government. But yes, he is a mutant! However, his elite class identity has almost always trumped even the barest hint of solidarity with fellow mutants. Still, while Shaw has used Sentinels to attempt wiping out the X-Men, his use of these killer robots has been retconned over the years. In one of Marvel’s more forgettable series, X-51 (1999), it’s revealed that, unlike the US government’s previous Sentinel-building contractor Stephen Lang, Shaw had no intention of building a Master Mold unit that could result in automated Sentinel production outside his own control. His logic turns out to be similar to Xavier’s in the Krakoa era: Keep your enemies close, so close in fact, potential allies might be quite confused about your position! 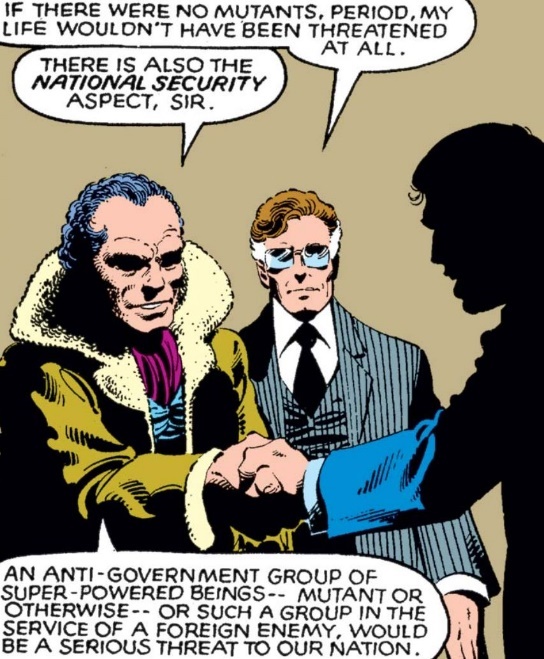 [Shaw feeding the fears of President Reagan while secretly furthering his own capitalist agenda;

In the early ’80s, though, Shaw was just out to make big money while keeping himself safe from Sentinels and the US government that would likely get them one way or another. A Classic X-Men retcon from 1987 would reveal some details, albeit still fuzzy, about the transition from Lang’s Sentinels to Shaw’s, where the idea of keeping a close reign on the robots’ manufacture was first established. (More on this below in section VII, B!)

Regardless, Shaw has occasionally proven a reluctant ally to the X-Men, most notably to Xavier when battling Sinister’s takeover of his body—but only because Sebastian, too, was one of the child subjects Sinister had imprinted his “matrix” upon way back when.

Beyond his mercenary tactics and fat wallet, he can be a powerful ally in terms of power set. Somewhat like Bishop, he can absorb virtually any form of energy and return it in full to whoever or store it up until he’s ready to release it. So: Someone lands two punches, Shaw can return a doubled-up punch in return. Barring catastrophic injury, he can heal quickly, and even bullets and blades are sapped of speed upon reaching his flesh—though he’s not bulletproof. (Whatever changes, if any, wrought by Mothervine, well, I’ve already mentioned that the X-Men: Blue plotline was dumb. As of mid-2021, it’s still in the dustbin.)

As we see in POX 5, Emma says Shaw will be by her side on the Quiet Council, but she will indeed have to keep a tight rein on him. The pair have a tortured history, and the White Queen has only recently started to exact her drawn-out revenge on her erstwhile torturer.

Next Time: The worst human atrocities on mutantkind memorialized and analyzed.