You are here: Home / Featured / History of the Time Variance Authority & Time Keepers

Marvel’s Time Variance Authority – now stars of Loki in the Marvel Cinematic Universe’s TV series on Disney+ – is a combination of parody, inside editorial jokes, and somehow also tremendous power in the Marvel Comics universe. Operating in “null-time,” The TVA are literal continuity cops, sending their agents to disrupt anyone messing with the timestream, and returning them to the familiar banality of paperwork and office life that is maintaining all of time!

Big picture, the TVA take themselves very seriously, but from creator Walt Simonson on down the line, there’s a nod and a wink to the inherent comedy of trying to keep the tangle of Marvel continuity and timelines perfectly straight. Indeed, the TVA is frequently grounds for science-fiction parody, and throughout Marvel History – ironically – they’ve never been at the center of any real MAJOR Marvel storylines.

Honestly, looking back it’s pretty weird that until the last decade of Cable and Deadpool stories, they’ve super rarely dealt with Marvel’s time traveling heroes, villains, and mutants. That’s what this guide will show you though; the essential history of the Time Variance Authority and the mysterious Time Keepers they report to. 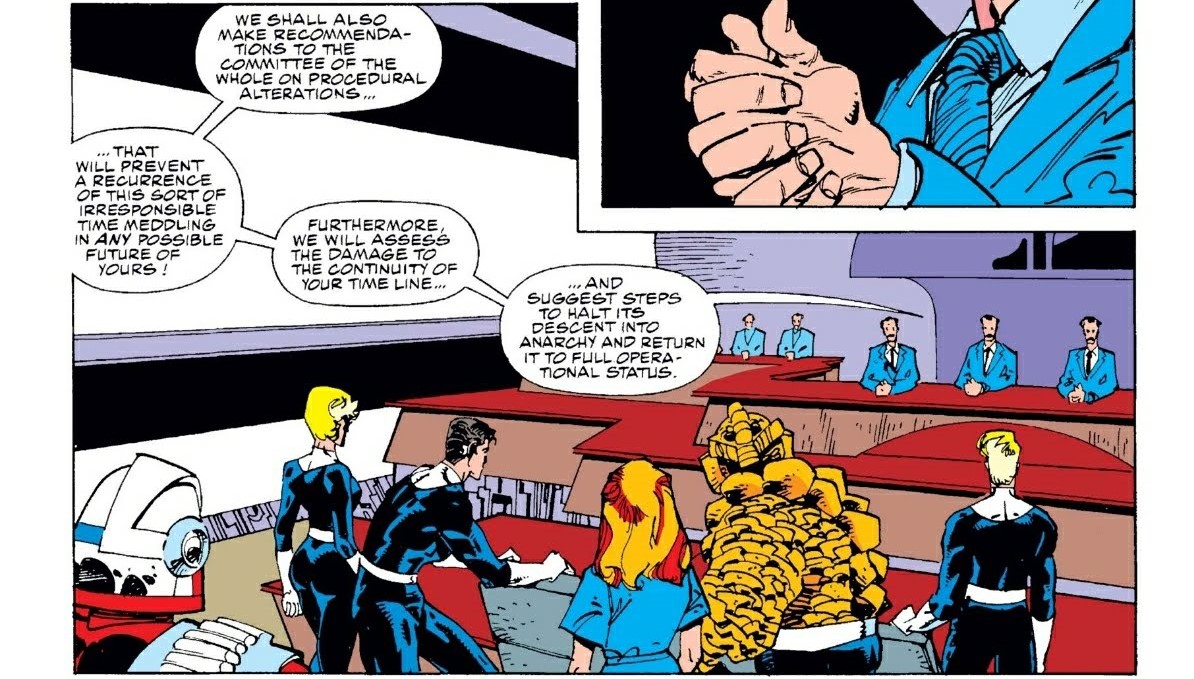 The Time Variance Authority is introduced in the iconic Walt Simonson run on Thor, issues #371 to #372, with the appearance of a hardcore Judge Dredd riff in the TVA agent Justice Peace.

It’s in Simonson’s often overlooked run on Fantastic Four, though, where we see the Time Variance Authority detailed and explained. Over the course of Fantastic Four #338 to #354, we see the TVA for the first time in full, as continuity cops, amoral business-like protectors of the timestream more concerned with the paperwork tied to Galactus using an ultimate nullifier on a universe than other any implications.

Likewise, it’s in these issues of Fantastic Four where we meet Mobius M. Mobius, the repeated arbiter of the TVA’s policy, designed based on Marvel editor and continuity-head Mark Gruenwald.

Now, if you’re thinking all this time travel sure feels like Marvel crossing into Doctor Who waters, well, Marvel writers would agree with you. Professor Justin Alphonse Gamble is a deliberate play on The Doctor, introduced in a team-up with Power Man and Iron Fist (issue #79), and later revealed as an agent of the TVA. The non-doctor re-emerges in Avengers Annual #22 during the Terminatrax Objective.

Now, the Time Keepers and their origins technically begin about a decade before the Time Variance Authority appeared in Marvel Comics – and would this even be a history of the timestream without preposterous Marvel continuity leaps and reaches across the decades? – in Thor #243 to #245.

In their debut, the trio of space lizards are known as the Time Twisters, and it’s revealed as the story progresses, that essentially they are the idea of the Time Keepers whose actions go wrong and actually cause great damage to the timeline rather than ensuring its fulfillment. After teaming with another time traveler, Zarko the Tomorrow Man, Thor (and Jane Foster) encounter “He Who Remains,” which is also how my wife refers to me after a decade of marriage.

My surprise favorite TVA and Time Keepers story really hones in on the Time Keepers in 1992’s What If #35 to #39, aka “Timequake,” written by longtime Marvel-head Roy Thomas. Like most What Ifs, Uatu the Watcher narrates, describing all the begins who watch the timeline, and look out specifically for out of control Nexus events. This sequence also clarifies the Time Keepers role driving the actions of Immortus, aka the future version of Kang the Conqueror, as their custodian of the time stream. Immortus acts on behalf of the Time Keepers, or so we’re led to believe.

Now, working with the Time Keepers, Immortus not only shapes the timeline, but also erases entire alternate realities, specifically in order to take out Nexus Beings whose existence threatens the Time Keepers. This is where things get especially interesting with MCU / Disney+ connections because Immortus’ selection for the one true Nexus Being is Scarlet Witch, calling back to the storyline of West Coast Avengers #61 to #62. Immortus plans for Wanda fail, and the Time Keepers ultimately use Immortus as the construct for the nexus powers of the multiverse.

Writer Kurt Busiek would follow up on the continuity threads of “Timequake” in his Avengers continuity extravaganza, Avengers Forever. 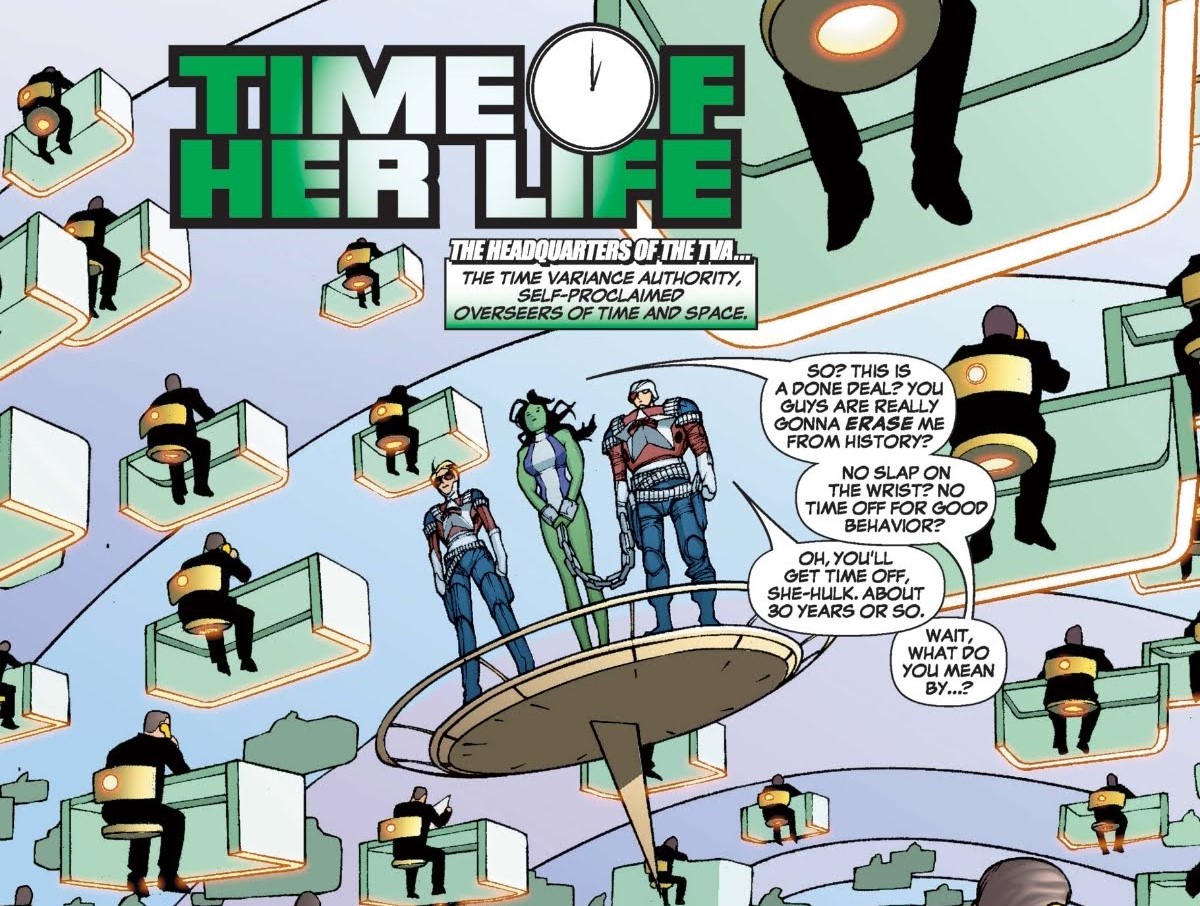 The TVA pops up again in the mid 2000’s when the Fantastic Four are told Earth-616 lost 8 minutes, and most memorably, when She-Hulk is put on trial by the TVA during the Dan Slott written run.

As a lawyer, Jennifer Walters is brought into a time trial within the TVA where a murder occurs using time travel technology. While there, Jen encounters a pre-Avengers Disassembled / House of M Clint Barton, and tries to slip him a note about what’s to come in those events, landing herself in her own kind of time trial.

Apart from Slott’s use in She-Hulk 2000’s era appearances of the Time Variance Authority are sparse. Mobius shows up to Reed Richards to enlist his help in restoring a missing 8 minutes during the Marvel Knights 4 but for my money this story’s pretty forgettable.

Deadpool and Cable: Split Second #1 to #6

In this enjoyable romp from writer David F. Walker, in 2018’s Cable and Deadpool Annual #1, Deadpool does us all the favor of making it known that Justin Alphonse Gamble is a real grade A creep! Gamble sets Deadpool to protect his mother – it’s very Terminator – but it turns out she’s actually a fellow TVA agent who Gamble had been harassing. 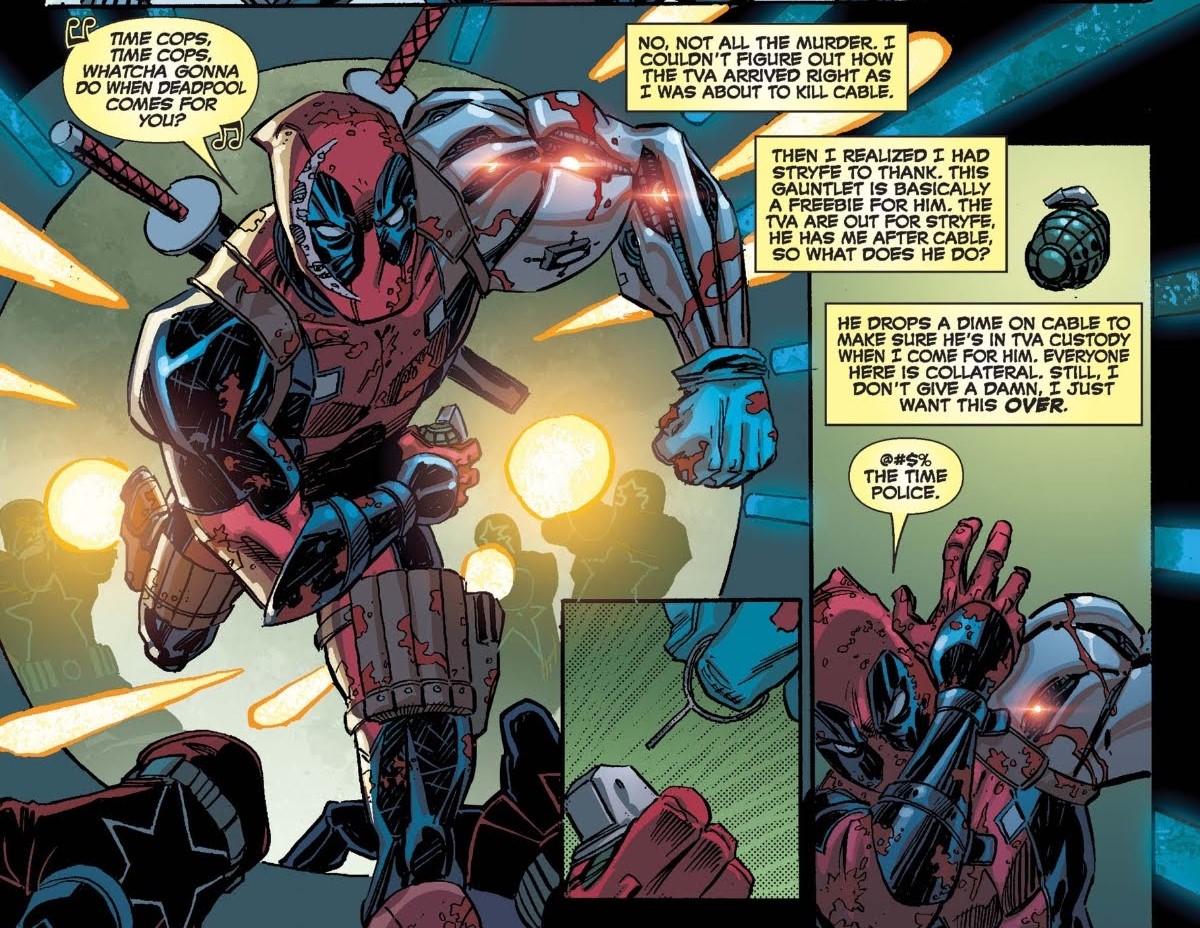 Despicable Deadpool finds Wade Wilson back to his murderous assassin for hire ways, kicking things off trying to kill long time comics pal, Cable, aka Nathanial Charles Askani Rutabaga Summers. A very Dredd like appearance of the TVA time cops step in to apprehend Cable/Stryfe, and Deadpool makes his way to a TVA prison!