was a shocking surprise upon release in 2018. DC’s line of self-contained graphic novels had found decidedly mixed success since their launch years prior, and Green Lantern seemed like an odd fit. The other titles featured high profile creators such as Geoff Johns (Batman: Earth One

). At the same time, Green Lantern sported an undeniably talented, but not as well known, team in Corrina Bechko and Gabriel Hardman. The graphic novel arrived to critical acclaim, presenting a hard-edged revamp of the iconic DC hero in a near-future sci-fi infused setting. Thankfully, the sequel, Green Lantern: Earth One Vol. 2

, is nearly every bit as good as the original and drives the reimagining of Hal Jordan forward in exciting, timely ways.

The events of Earth One Vol. 1 left Hal Jordan as a member of the newly reformed Green Lantern Corps in a galaxy overrun by the despotic Manhunters. Picking up three years after the first volume, Earth One Vol. 2 presents an Earth that is taking its first steps to join the galactic community after learning of extraterrestrial life via Hal Jordan’s return to his home planet. Earth’s overtly authoritarian governments, including the United States, chafe at the new status quo, but progress has been made to bring Earth forward. 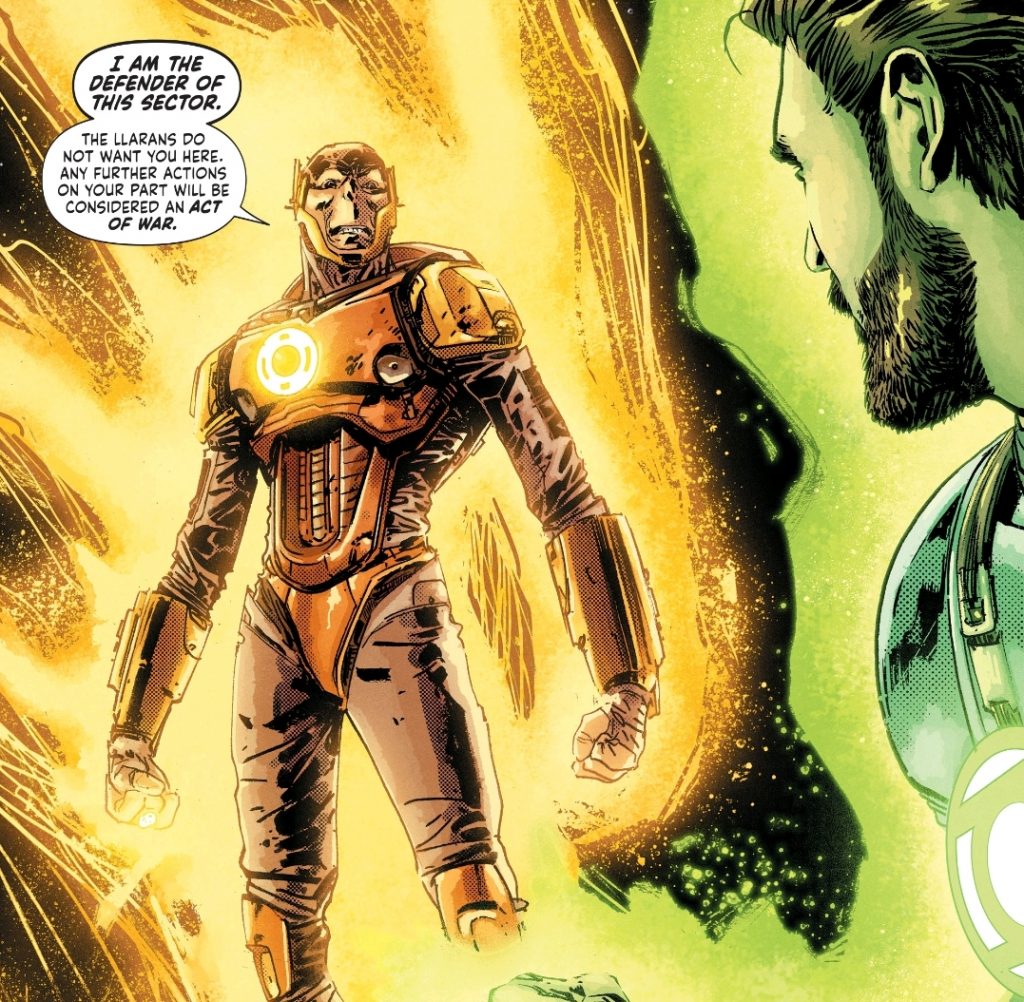 This balance, between sci-fi action and political and societal intrigue, is where Earth One Vol. 2 excels. Much like the first installment, Earth One Vol. 2 questions what role Green Lanterns should have in society. Are they space cops with unlimited authority and jurisdiction? Are they passive peacekeepers, only responding to threats that are clean cut with apparent good and bad guys? These questions are only compounded by the arrival of Yellow Lanterns, a mysterious new force with far more powerful rings at their disposal, and a very aggressive outlook.

These new ring-slinging threats are backed by the lone-surviving Guardian of the Universe, the founders of the Green Lantern Corps. Much like his mainstream DCU counterparts, the Guardian wishes to use the Yellow Lanterns as a peacekeeping force throughout the galaxy, whether the planets they claim to be protecting wish for it or not. Freed from the constraints of the mainline DCU, Bechko and Hardman are unafraid to dive into the morality of this mission. Whether forcing one being’s idea of peace and order, even well-intentioned, is morally sound. A question that is firmly answered and resolved thrillingly by the end of the graphic novel. 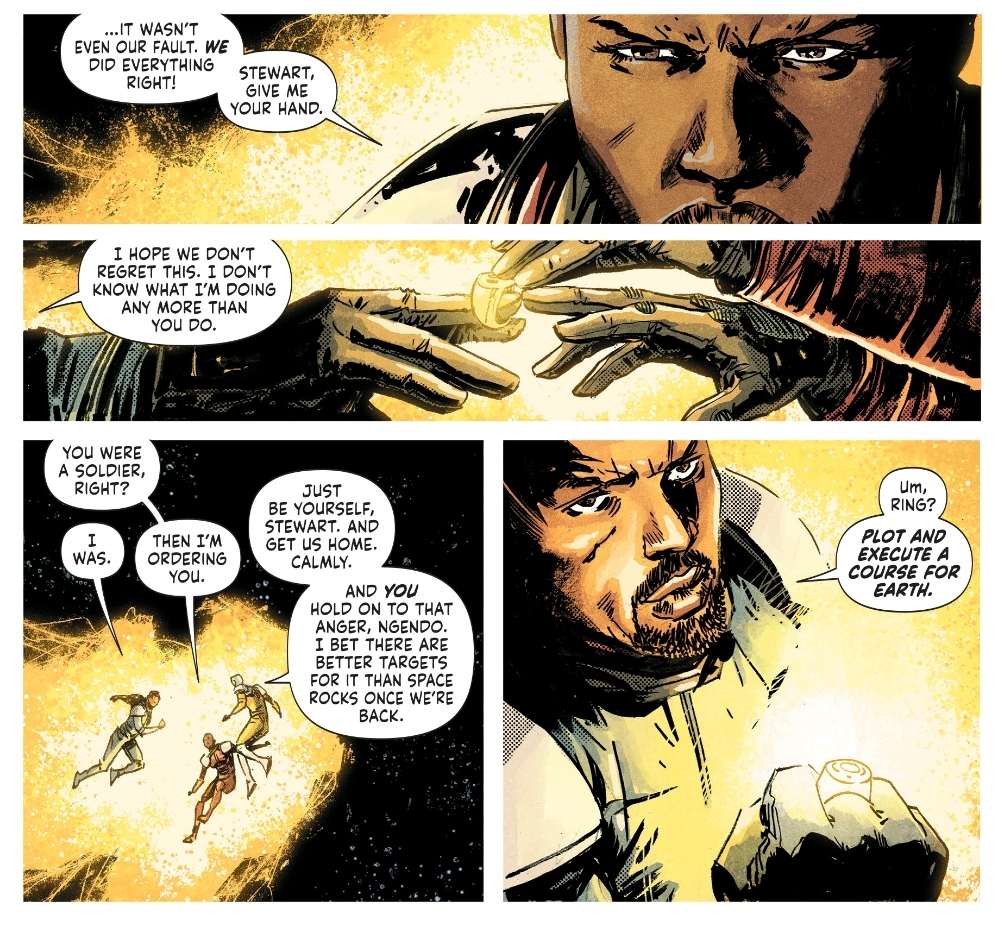 The Yellow Lanterns aren’t the only significant new arrival, as fan-favorite John Stewart joins Hal as a primary character throughout the graphic novel. Contrasted with Jordan’s brash and head-strong drive, Stewart is a lead that tackles situations with a more level head and openness to new information or solutions. This is only reinforced once he dons a power ring, as his background as both an engineer and a soldier allow him to wield it with a precision and accuracy Hal never quite manages.

Stewart is flanked by several earthling supporting players, including Green Lantern favorites such as Carol Ferris, as part of an increased emphasis on Earth throughout the series. Beginning with a diplomatic trade meeting gone wrong and dove-tailing into planetary invasions and secret conspiracies, Earth’s spotlight is deployed well, operating both as a commentary on the modern state of our world and an exciting exploration of our potential future.

Earth One Vol. 2’s vision of the future is hopeful, giving a glimpse of a world where Earth can potentially move past petty squabbling and power-hungry strongmen, but it is not a comfortable journey. Centcom, a nebulous global power structure led by the reclusive General Jask, bristles under Jordan’s attempts to wrest authority away from their organization, and weaponizes everything from media narratives to baseless criminal accusations to hold onto their power.

The eventual ousting of both Centcom and the Yellow Lanterns are only possible through cooperation and mutual aid. Green Lantern, any Green Lantern, cannot stand against these threats alone, and Earth One Vol. 2 shows that every hero and every group of people need help sometimes. That by being open to assistance and aid, we are ultimately stronger together than standing apart. 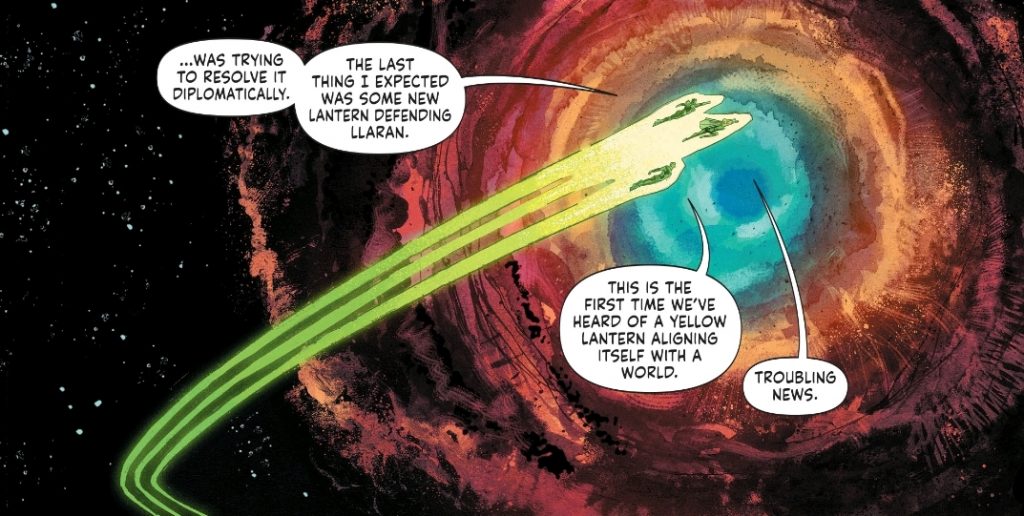 Bechko and Hardman’s script remains strong throughout the entirety of Earth One Vol. 2, only occasionally bogged down with a few too many spinning plates. The split plotlines (including Hal Jordan, John Stewart, Sinestro, The rogue Guardian, and others) weaving in and out at a fast past lends the book a definite sense of urgency, but also fails to give some plot and character beats enough time to breathe fully. This is ultimately a minor complaint in the grand scheme of things, as the title ends up being a deeply satisfying package.

The highlight of the piece is, arguably, Hardman’s art. Gritty, scratchy, and tangibly real, Hardman’s experience working in storyboarding for Hollywood productions is put to as much use as his previous comics work. The action flows smoothly and cleanly, with every panel and page transition feeling natural and weighty, giving the entire story a very cinematic feel while remaining firmly grounded in the hard sci-fi comics setting.

Jordan Boyd’s coloring work deserves just as much praise, injecting the graphic novel with a washed-out, yet vivid palette that helps it stand out among its superhero peers. Green Lantern titles often live and die on the quality of their coloring, the hard-light powers of their leads putting a notable emphasis on coloring even beyond the usual strains of superhero comics. Boyd proves more than up to the task and provides Lanterns, both green and yellow, with bold, flashy displays of power that still feel like natural inclusions within the setting.

is everything a sequel should be. Building off of the foundation established in Earth One Vol. 1, pushing the story forward in directions that feel both satisfying and unexpected. Given the recent, significant, lay-offs within DC Comics, there is no clear answer on whether a third volume of the series will ever arrive. Even if Earth One Vol. 3 never comes, Bechko, Hardman, Boyd, and Bowland have delivered a fantastic pair of graphic novels that have firmly established themselves as one of the best reinventions of a comic icon in years.