.
You are here: Home / Featured / Generation X Epic Collection: Back To School Review!

Generation X is a strange spot in the larger X-Universe in such a unique way. Whereas Simonson’s X-Factor was a bit of an odd duck with so many elements that would become such important staples for the mutant corner of the Marvel Universe, Generation X starts out with such a specific voice and strong characters, but for the longest time felt forgotten in the larger scheme of the X-Men line.

Arguably the most popular character from the book is Jubilee who had a head start by being a member of the X-Men proper and made even more popular by being a mainstay on the iconic cartoon. Following Jubilee in popularity would be Monet, who outside of this series, was a mainstay of Peter David’s X-Factor amid other scattered appearances. As for the rest, there didn’t seem to be much love for Chamber, Synch, Husk, Skin, and their time at the Massachusetts campus of Xavier’s School for Gifted Youngsters.

That is until Krakoa. The current era of the X-Books, spearheaded by noted Generation X stan, Jonathan Hickman, has seen a return to prominence for this era of X-Kids. Husk was a part of the strike team in House of X, Jubilee is holding down a spot on Excalibur

, Monet is co-starring in X-Corp, and, in what can only be described as “the flex of his career,” Hickman got readers in 2021 to care deeply about Synch

(who is now on the new roster of the X-Men). There has never been a better time for the Generation X: Epic Collection

to come out and get so many new readers, like me, to see the beginnings of this somewhat forgotten group of misfits as they take their long overdue time in the spotlight.

The collection begins with the crossover within a crossover “Generation Next” which ran through the issues of Uncanny X-Men and X-Men during the Phalanx Covenant (another story that is getting a decent amount of play in Hickman’s grand scheme). The crossover was drawn by Joe Madureira and Andy Kubert and written by Fabian Nicieza and Scott Lobdell, the latter of whom would go on to be the writer of the preceding team book. As far as introductions go, it’s pretty competently told, if not weighed down by the baggage of being in the middle of a larger event. We get introduced to a majority of the major characters with a really engaging and simple plot: Get to the next generation of mutants before the Phalanx do. It gives us a chance to see just a little bit of the characters’ backgrounds and them working together to rescue the rest. On top of being a “who’s who,” it gives conceptual reasoning for the title when we see Banshee pondering his next steps, acknowledging a sort of metatextual limbo for the character. The same can be said for Emma Frost, the actual most iconic character from this series, who was fresh off the loss of her Hellions team. This crossover really asserts the place where these characters are at to start the adventure that is Generation X. 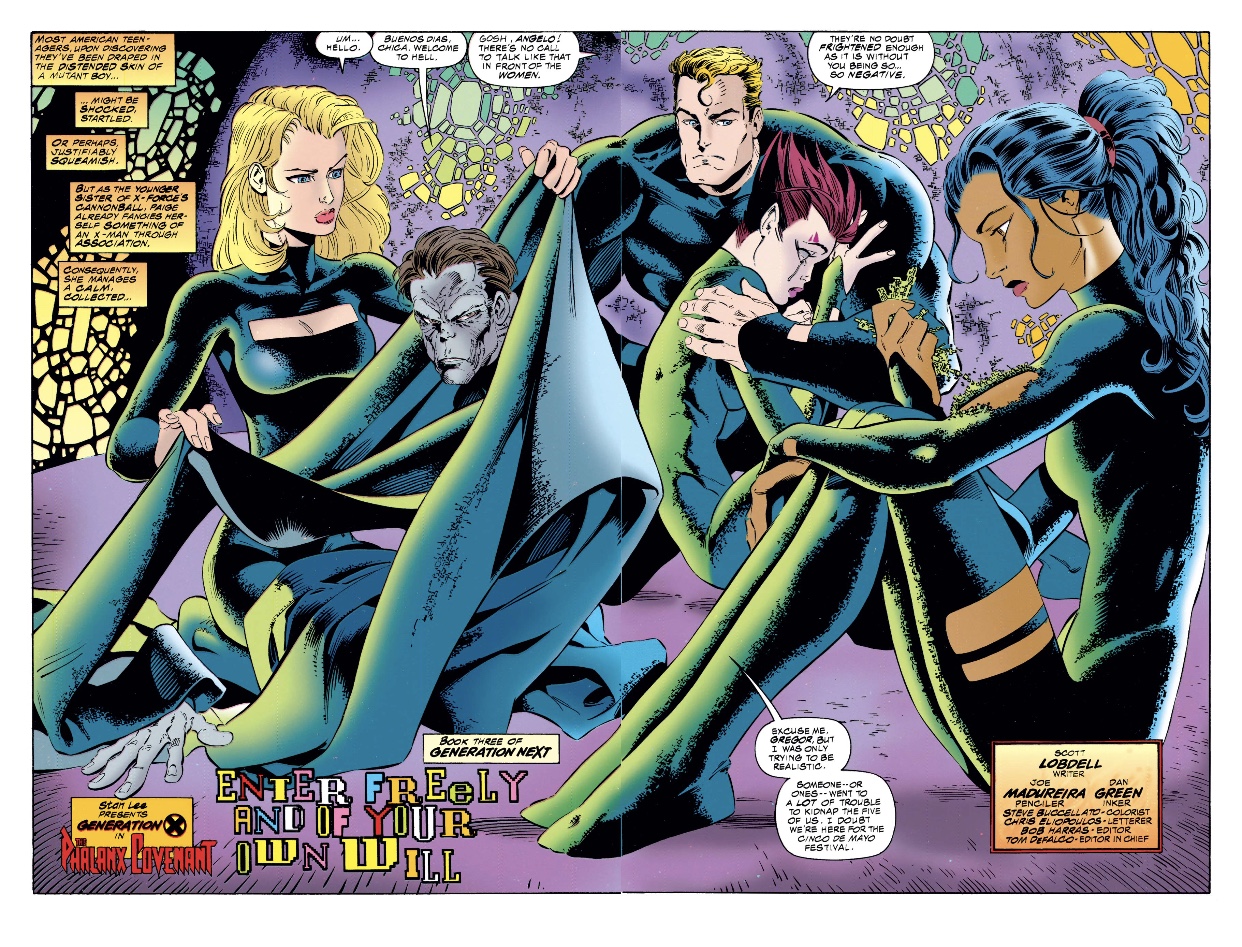 A good comparison for this crossover would be the New Mutants graphic novel that preceded that series. It’s definitely not the stuff that people remember when they think of the team but it provides a really solid grounding for what’s to come.

And what is to come? Generation X is written by Scott Lobdell and mostly drawn by Chris Bachalo (guest artists Roger Cruz and Tom Grummett fill in towards the back of this collection). Going into this title I set expectations very low primarily of my knowledge of Scott Lobdell, who along with being a serial harasser and problematic voice in comics, also wrote the New 52 Teen Titans and Red Hood and the Outlaws. Which is the only other Scott Lobdell comic I have ever read. So to say it was a shock that he ever wrote readable comics would be an understatement. The first nine issues of Generation X were a pleasant surprise with a lot of character and charm. It’s not hard to see why this title and these characters would leave an impression on readers and how frustrated they might be to not see them pop up for years. 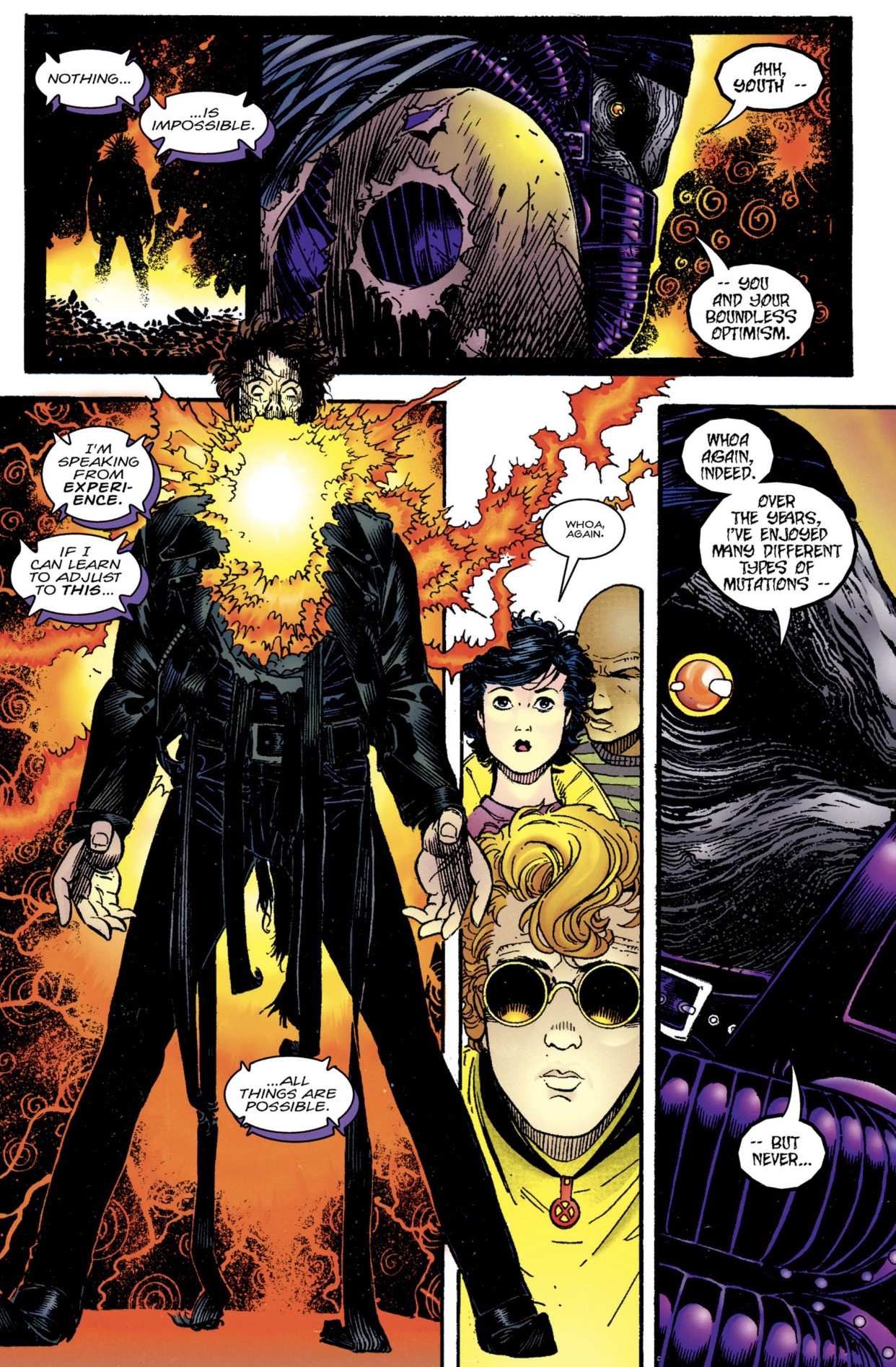 From the first handful of issues, Generation X does a great job at setting itself apart. The best word I can choose for the book is “playful” and so much of that is accomplished in the visuals. If there’s a comparison to New Mutants to be made in Generation X’s favor, it’s that Gen X skips the visual growing pains with Chris Bachalo setting a notable style from the get-go. The kids feel young and Bachalo draws the entire cast with such a strong personality and that’s not even getting into the atmosphere and texture he brings to the table. The issue where the gang searches for an escaped Penance, has so many fascinating uses of spirals and circles for texture. His work here is so novel as well because while he’s definitely not the Chris Bachalo that we’re familiar with today, the overwhelming elements of contemporary Bachalo set his work apart from the rest of the 90s comics crowd. The inventiveness is also present in the page layouts, one prime example being Angelo and Paige’s game of scrabble which is a high point of the whole collection.

And speaking of letters, Richard Starkings is really an unsung hero in so much of the comedy of this book. There are so many lettering cues that are so inventive as well as engaging. The psi speak used for Chamber and Emma Frost is such an interesting choice and one I’ve not seen before or since. That creativity aside, there are so many lettering ticks that add to the jokes of the book and really solidify this book’s identity. These little moments of visual levity carry on to the “Next Issue” gags and so much of the needed levity of the unexpectedly heavy Holiday Special. Visually Generation X does an excellent job putting its best foot forward that it is a bit disappointing that this collection leaves with guest artists who leave a bit more to be desired. Tom Grummet is very familiar and inoffensive but Roger Cruz is a bitter pill to swallow after having pages and pages of Bachalo before him. 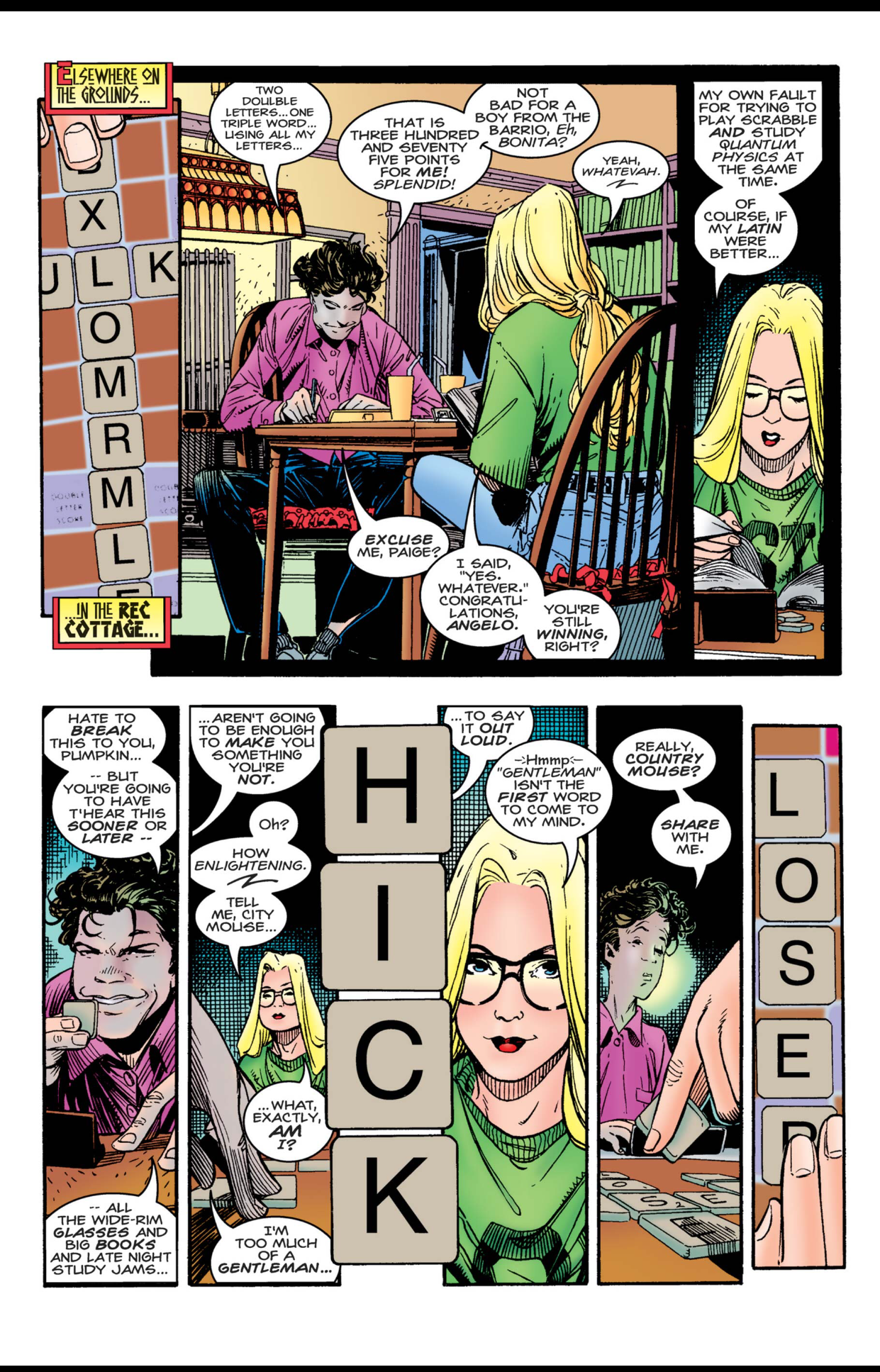 With regard to Lobdell’s plot for this first handful of issues, it’s not so much a “story” per se as much of a “vibe,” which arguably most teen-led books should be. No plot, just vibes. Of course, things do happen but it’s not so much about the threats or what’s happening but seeing these characters interact with each other which is such a draw to this book. We get introduced to Chamber and Penance within the first couple of issues, the team takes on Gene Nation and rescues Emma and adorable moppets Artie & Leech, and Cassidy Keep goes missing and they fight a cigar-chomping dragon. All perfectly normal X-Stuff, which is why these first issues appealed to me so much as a recent convert to many of the Claremont X-staples, Excalibur in particular. But wacky or not, the plot is definitely not what’s going to stay with me. It’s that scrabble game with Paige and Angelo, it’s Monet despising Emma, it’s Penance and Jono’s bond and best of all: It’s whatever the hell 90s time capsule Jubilee is saying.

It again pains me to say: Scott Lobdell wrote a very entertaining comic.

This collection of Generation X has really come at a perfect time. Having become serious about reading X-Men in this current era it was an absolute treat to see where these characters who are stepping into larger roles are coming from much in the same way it felt when I finally sat down to read New Mutants. Seeing Paige Guthrie being the try-hard hayseed after playing such a big role in the opening salvo of this X-Men era and Everett Thomas who leads so naturally in this finally getting his due on the X-Men is such a delight. It’s still frustrating though because while I don’t want to make a habit of reading many Scott Lobdell comics at all, Generation X is the teen comic by him I wish I had been reading as a thirteen-year-old instead. It’s a sticky conundrum when it comes to revisiting Lobdell’s work and work from authors like him especially in this genre where so much is built on top of it, but if as a reader you can get past that and have been enjoying these characters today, this collection is a worthwhile start to getting acquainted with Generation X.