Some characters like Mystique or Jacob Gavin have also been described as genderfluid by fans, and while I do not want to invalidate the way these characters have been interpreted by fans, their actual portrayal in-universe doesn’t match the definition of genderfluidity. Despite the changes their bodies go through, they seem to identify to one specific gender (Mystique only taking on other gender identities as a disguise, and Jacob Gavin actively seeking to go back to their initial body and the gender they were assigned at birth).

Check out Part 1 of Trans Representation in Marvel here: https://www.comicbookherald.com/a-guide-to-trans-representation-in-marvel-comics/ 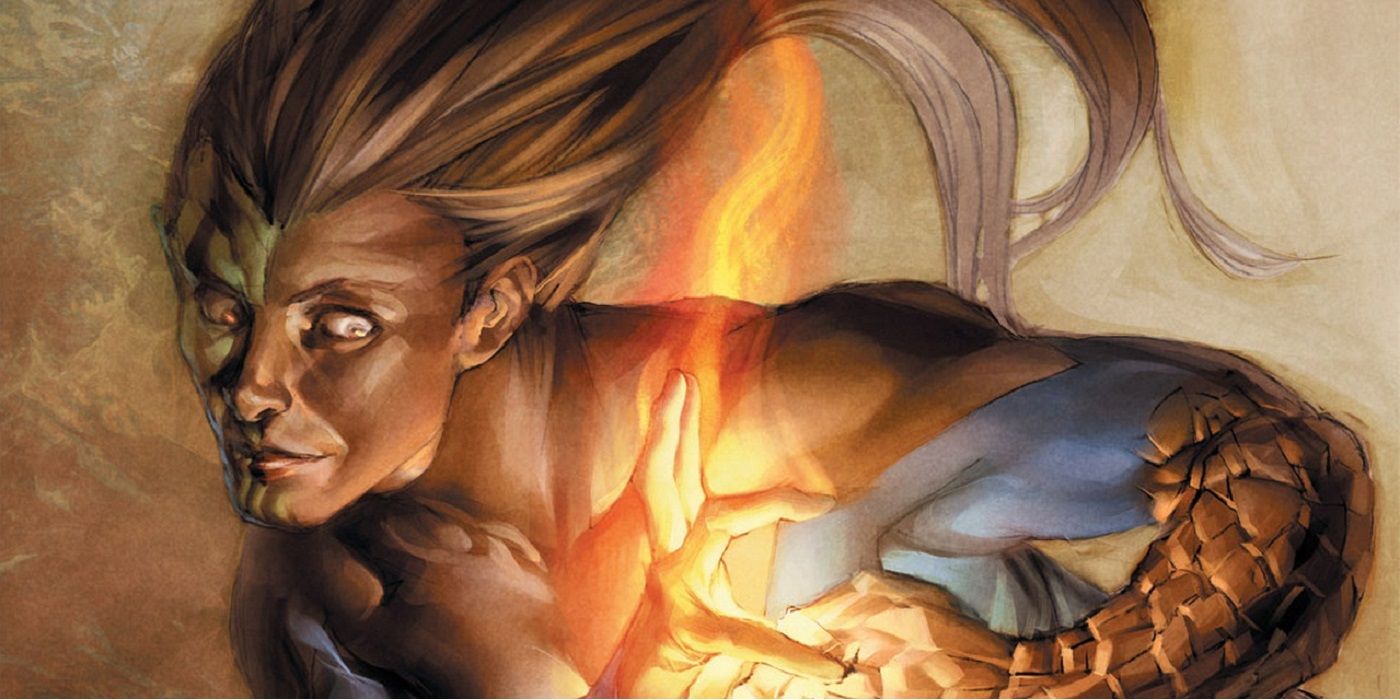 Created in the pages of Brian K. Vaughan’s Runaways, Xavin is a member of the Skrull Royal Family and a Super-Skrull in training. They are first introduced in their “male form,” claiming they are Karolina Dean’s fiancé, as arranged by their parents. Xavin only takes on a “female form” to convince Karolina to come with them, get married and end the war between their people. And although this does appear to canonize Xavin as genderfluid, Vaughan does so in a very weird way that is a far cry from how actual genderfluid people work in the real world, as (shocker) human beings can’t shapeshift (and, usually, neither can they choose to change their gender at will).

This portrayal of genderfluidity also ties a person’s gender with their physical attributes, in a way that only makes sense if you assume that gender = sex, which is just wrong when trying to include a genderfluid trans person. With that being said, in later issues of the run, and despite the fact that their genderfluidity seems to weird out the other members of the team, Xavin does appear to explore, question, and reaffirm their gender identity, including in Issue #22 when they have a discussion with Molly about how it is not on them to stop changing their gender because others don’t like it, it’s on others to accept that people can be different from what they’re used to. It’s the bare minimum, but it’s still definitely worthy of being noted in a Marvel comic from 2006. Sadly, Xavin has been gone from the Marvel universe since 2009, when they left to stand trial in Karolina’s place to save her life in Runaways (2008) #6. 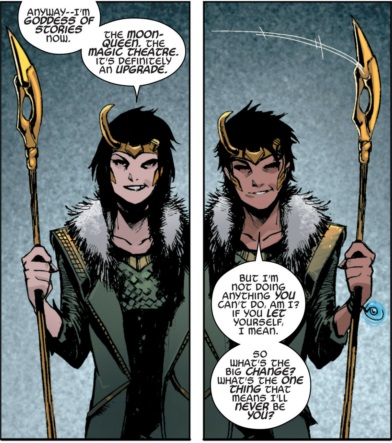 Marvel’s most notable, and yet most often ignored example of genderfluid representation is without a doubt the god of mischief themself, Loki. Although Loki has spent most of their Marvel history as a man, including in their MCU version, the first hint that there is something more to their gender identity came in J. Michael Straczynski’s 2008 run on Thor, in which they are reincarnated as Lady Loki, using the body of Lady Sif. However, during most of that run, Loki only seems to be taking on a female gender identity because they are using the body of someone who is considered to be biologically female (whatever that means), which once again needlessly ties the idea of gender to sex.

The first fully intentional and careful portrayal of Loki as genderfluid came in Al Ewing’s Loki: Agent of Asgard. Even though Loki’s genderfluidity is once again portrayed in the form of shapeshifting, especially in the final issues of the run, Ewing does take care to write Loki’s gender as something that changes now and then without necessarily needing a specific reason. Loki isn’t a man or a woman that sometimes changes their gender: Loki is Loki, no matter their gender or appearance. This also comes through in the way other characters respect Loki’s gender identity, with even Odin calling them “my child who is both son and daughter.” Sadly, since Ewing’s run, and apart from small references in Squirrel Girl II #27 and Loki: The God Who Fell to Earth, Loki has mostly been portrayed as a man, with little to no acknowledgement of their genderfluidity whatsoever. 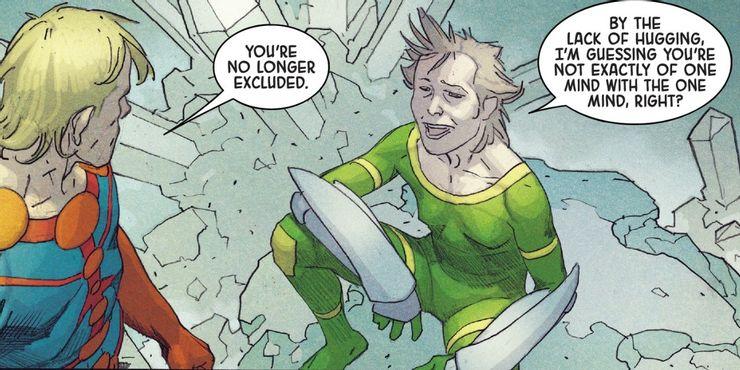 Most recently, in the first status quo-changing issue of Kieron Gillen’s Eternals, Ikaris states that with the immortal species’ reboot, many Eternals “have taken advantage to change appearances.” This is how he explains to Tony Stark the fact that Sprite, who had until then appeared in the form of a young boy, now looked like a young girl and used she/her pronouns. And even though this once again ties gender identity to a physical and biological change, it also does appear to give all Eternals the potential to be genderfluid, although with their change in gender apparently only taking place when they die and are brought back to life. It remains to be seen if that potential will be played with in the rest of the run, especially with Sprite being one of the main characters.

Even though Marvel has a few notable examples of genderfluid representation, it is rather disappointing that they are all tied in some way or another to real-life stigma tied to outdated views on gender identity; as well as tired clichés of genderfluidity needing a magic explanation tied to shapeshifting. Now, it could be interesting to explore the idea of a shapeshifting genderfluid person through the lens of gender dysphoria, but that’s certainly not what any of these comics attempt to do. It’s also disappointing that this seems to be the only kind of non-binary representation present in Marvel Comics: in the year 2021, one would hope that the Marvel universe would include many characters of various gender identities, but when their most notable attempt at non-binary representation came in the form of a character called Snowflake in the never released New Warriors volume 6… we can only hope Marvel editorial learns from their mistakes and gives way to creators like Vita Ayala to write better non-binary characters, as they will hopefully be able to do on their current run on New Mutants.