You are here: Home / Featured / Gambit Reading Order Part 3: After Age of Apocalypse

Reality had turned inside-out.  The Age of Apocalypse had dawned, and with it had come another reality – a history that should never have been, a timeline where the dread lord Apocalypse had risen to power.  Given Gambit’s popularity, Marvel made the choice of making him the lead figure in one of their AoA series, Gambit and the X-Ternals.  At the end of it all, though, reality was restored – but nothing would ever be quite the same again.

First of all, the editorial edict had been made: whereas Uncanny X-Men had starred the Gold Team, and X-Men had starred the Blue, now arcs were to be woven between both series.  That meant the ongoing stories of Gambit swept between the books.  This is actually rather entertaining, given that the writers at the time were no fans of the Cajun, but his popularity meant the editors were pushing for him to be a central figure.  As a result, Gambit got a number of plotlines running simultaneously, meaning I’m going to have to organise this section rather more thematically. 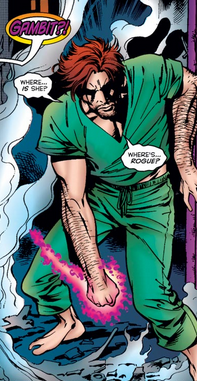 As the M’Kraan wave swept upon them, Rogue and Gambit had lip-locked.  As we saw in X-Men: Prime, this passionate kiss left Gambit in a coma, and Rogue reeling – fleeing from some disturbing truth, with only Iceman for company.  Gambit finally awoke from his coma, and realized that Rogue knew something he wanted forgotten.

That plot ran through X-Men #42, Uncanny X-Men #323 through to #325, and culminated in X-Men #45.  Gambit caught up to Rogue, with Gambit’s memories leading Rogue to an abandoned theatre.  Gambit refused to reveal his secrets, but in the end – with Rogue leaving unsatisfied – Gambit chose to remain in Seattle.  He was confronted by Sinister, who warns that nothing is over.

Linking closely in to this was a dark plotline involving Sabretooth and Psylocke.  In Uncanny X-Men #324, Psylocke – disturbed by Rogue’s reaction to Gambit’s secrets – attempted to break into Remy’s mind.  Gambit would never be sure how much she’d read.

Later, returning from his confrontation with Rogue, Gambit brooded over his past and built to a fury over Sabretooth’s being amnesiac.  Gambit confronted Creed with his memories, arguably kicking off the return of his memories that led to Creed’s near-killing Psylocke in Uncanny X-Men #328. 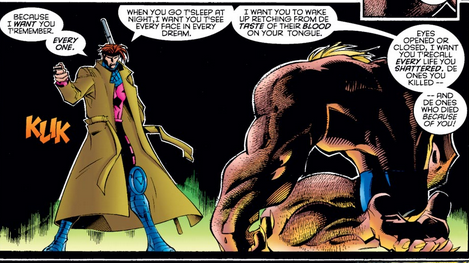 In Uncanny X-Men #330, this peaked with Gambit being present when Psylocke’s broken body went into spasm, and he had a choice – would he betray Psylocke, keeping his secret safe, or would he be a good man?  He chose the latter, in a moment that I view as key for the development of his character.

A third thread running through this was a strangely-building friendship between Gambit and Bishop, who (in X-Men 46) went to a bar to discuss Bishop’s old suspicions that Gambit would betray the X-Men.  The two worked together through to X-Men #50, and had a key conversation in Uncanny X-Men #331 where Bishop decided that, whatever else he may be, Gambit is certainly a jerk!  In X-Men #52, Gambit, Bishop, and the Beast – at this point replaced by his Age of Apocalypse duplicate – were briefly captured by Sinister, who learned a little of this alternate reality. 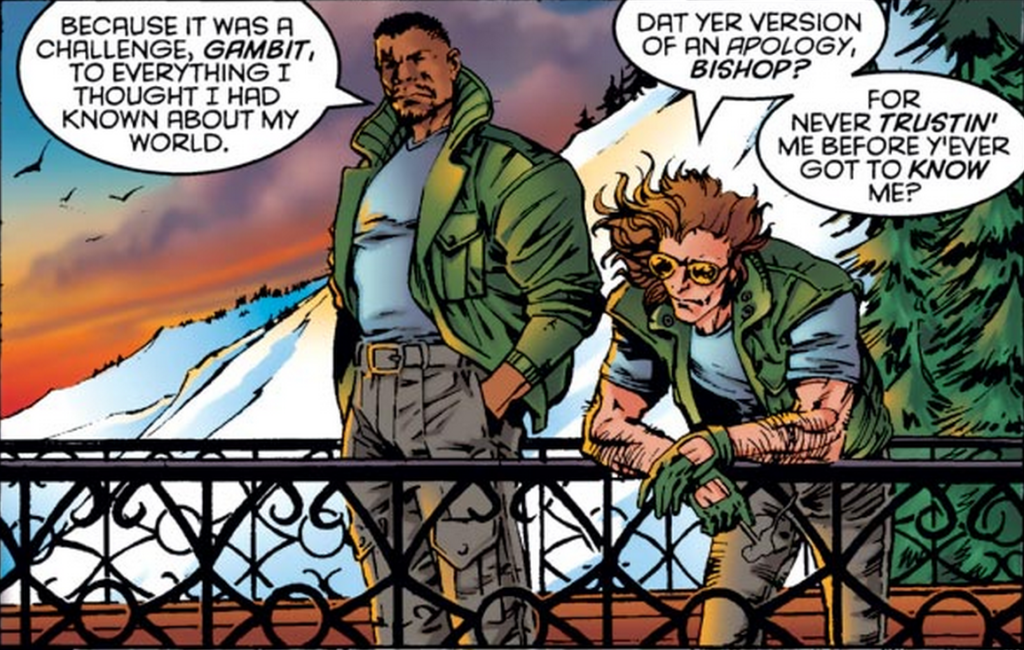 This phase, incidentally, also saw two mini-series that feature Gambit: Wolverine and Gambit: Victims, in which Logan was framed by Arcade, and the two mutants collided in a Jack-the-Ripper-esque tale; and the Rogue miniseries, in which Bella Donna sought revenge on Rogue, who she blamed for the loss of her memories.

In Uncanny X-Men #333, Gambit and Phoenix snuck into a meeting hosted by Bastion, only escaping with the help of the mysterious entity known as Onslaught.  This led into the two-part storyline that revealed Onslaught’s identity, in the pages of Uncanny X-Men #334 and X-Men #54, and Gambit played a role through the whole Onslaught crossover.  Gambit was left with a new challenge, in the arrival of the apparently-rejuvenated Magneto – Joseph.  Remy’s discomfort was entertainingly notable in Uncanny X-Men #337, #338 and the 1996 X-Men Annual.

In X-Men #58, Storm visited the Morlock Tunnels on the anniversary of the Morlock Massacre, and was surprised to find Gambit already down there, paying his own respects.  Deeply emotional, the Cajun got into a scrap with Joseph.

From Uncanny X-Men #341, however, the story of Gambit and Joseph took a twist – they were part of a band of X-Men who are taken to the depths of Shi’ar space, and all gained new outfits (ostensibly Shi’ar clothing!).  They triumphed, and returned to Earth, but Gambit’s secrets seemed to be pursuing him relentlessly.

In Uncanny X-Men #348, Gambit and Rogue were imprisoned by forces who were clearly connected to Gambit’s past.  Their powers were negated, and at last they spent the night together.

Matters came to a head in Uncanny X-Men #350, albeit not quite as Scott Lobdell had planned.  Due to time constraints (and likely due to a heavy editorial influence that kept forcing rewrites), Lobdell’s script for #350 wasn’t going to be ready in time, and Steve Siegal was brought in.  He penned a fairly skillful first issue that put Gambit on trial by an enigmatic being calling himself Eric the Red (in reality Magneto).  It was revealed that Gambit was tied to the deaths of the Morlocks, and that – in a revelation that horrified the X-Men – he was actually the one who led the Marauders through the Morlock tunnels.

And so this tortuous phase of Gambit’s life came to an end, with Gambit’s greatest secret revealed at last.  Shaken by this, the X-Men – including his beloved Rogue – abandoned him in the blizzards of Antarctica.  It was a heart-rending book.  Siegal planned to have Gambit disappear for a while; however, this was not to be.