You are here: Home / Featured / FRIENDLY NEIGHBORHOOD SPIDER-MAN: The Human Heart of the Superhero

For more than five decades, Spider-Man has remained one of the most popular and enduring comic book heroes. Created by Steve Ditko and Stan Lee, Peter Parker was the ultimate power fantasy to millions of readers young and old: an ordinary, shy kid who was suddenly blessed with spectacular powers. But since swinging into our lives in 1962, Spider-Man’s stories have evolved, as Peter met fellow heroes, lost friends and family, fought a bunch of his clones, struggled with his own mortality, and even lived through the heat death of the Marvel Universe. Once an incredibly down-to-earth look at superheroes, Spider-Man began to outgrow his everyman roots, with each larger-than-life threat increasing the fantastical elements of Peter’s life. To many, this trend reached its peak during Dan Slott’s 10-year run on the title, with Spider-Man founding his own billion-dollar company, gaining an arsenal of high-tech equipment, leaping into a multiversal epic alongside other spider-people, and, yes, fighting even more clones somehow (Don’t know why people keep coming back to that.) While Slott’s run still had plenty of great moments, it became clear to readers that the creators involved with Spider-Man weren’t as interested in the man behind the mask. That is, until Tom Taylor, along with artist Juann Cabal began their own run in 2019, fittingly titled Friendly Neighborhood Spider-Man

. Trading the high-tech, high-concept elements of Slott’s run for a more intimate adventure, Friendly Neighborhood Spider-Man is a celebration of the human heart of the character, and how even the smallest of actions can make a world of change.

*SPOILERS AHEAD FOR THIS RECENT LIMITED SERIES* 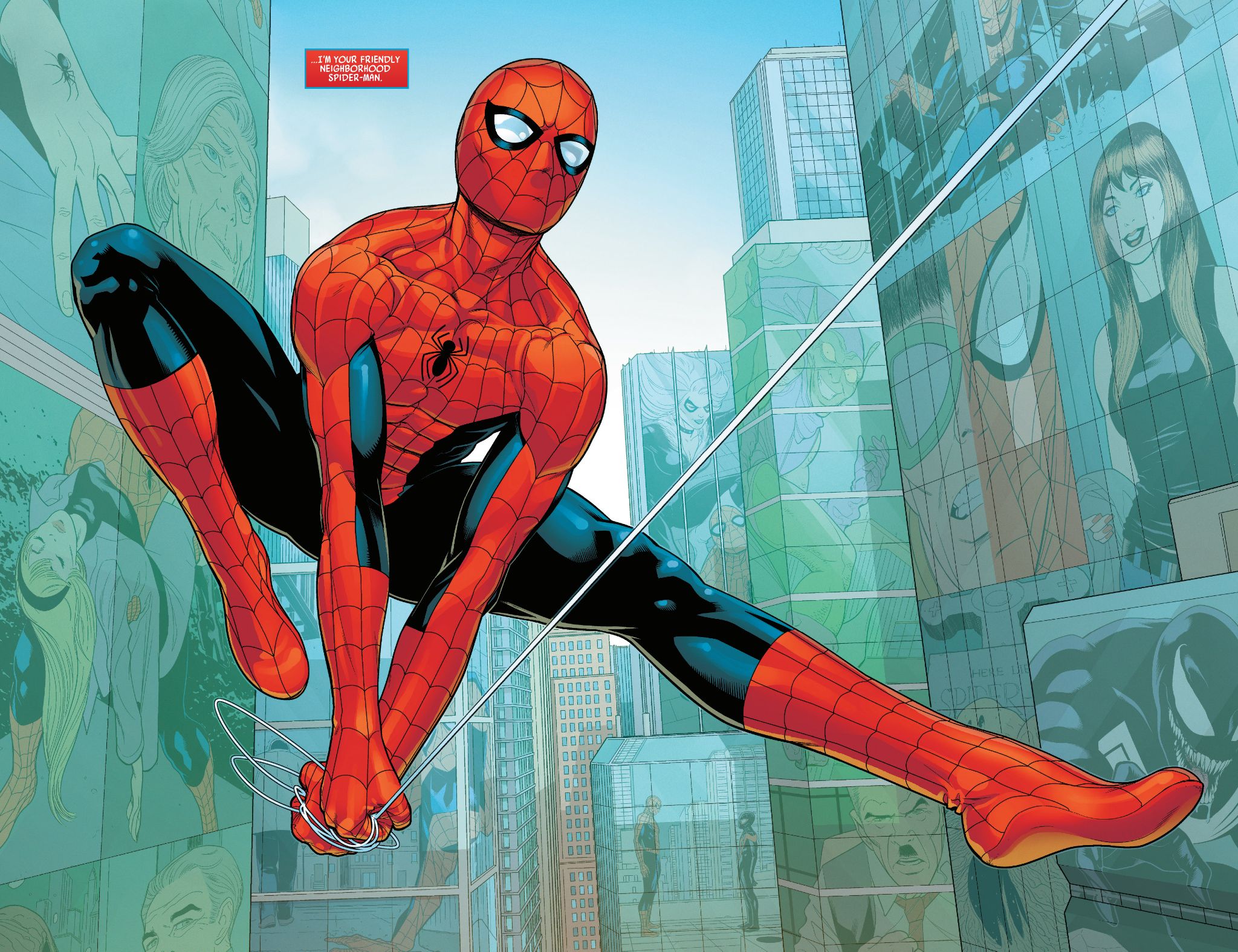 This is My Neighborhood

While much of the previous run was spent “elevating” the spectacle around Spider-Man, drawing more on high-concept sci-fi and high stakes plots, Taylor and his collaborators built their run to draw on the character’s “friendly neighborhood” moniker. Naturally, this return to form began with the hero himself, with Taylor firmly defining Peter Parker as part of a neighborhood, driven to help his corner of the world any way he can.

It wasn’t until I started writing him that I really worked it out…
With a lot of heroes, they’re most heroic when they’re in their suit and hide away their nature the rest of the time…
But Peter’s humanity and kindness isn’t ever hidden. He wants to do the right thing by everyone, no matter whether he’s on the ground or swinging through the sky.” ~ Tom Taylor

The result is a Spider-Man that’s less of an Avenger and more of a neighborhood activist; someone who loves his neighbors like family.
Along with this new Spider-Man, Taylor and his collaborators populate the story’s cast with the hero’s fellow New Yorkers, exploring each of their stories, secrets, and journeys throughout the book. Spider-Man’s home city has always been an intrinsic part of his stories, often used to reflect Peter’s struggles; balancing between spectacular highs and crushing lows. But through the series’ new expanded cast, Taylor transforms Spider-Man’s neighborhood into a complex ecosystem, driven less by Spider-Man and more by the many neighbors Peter Parker thinks of as family. 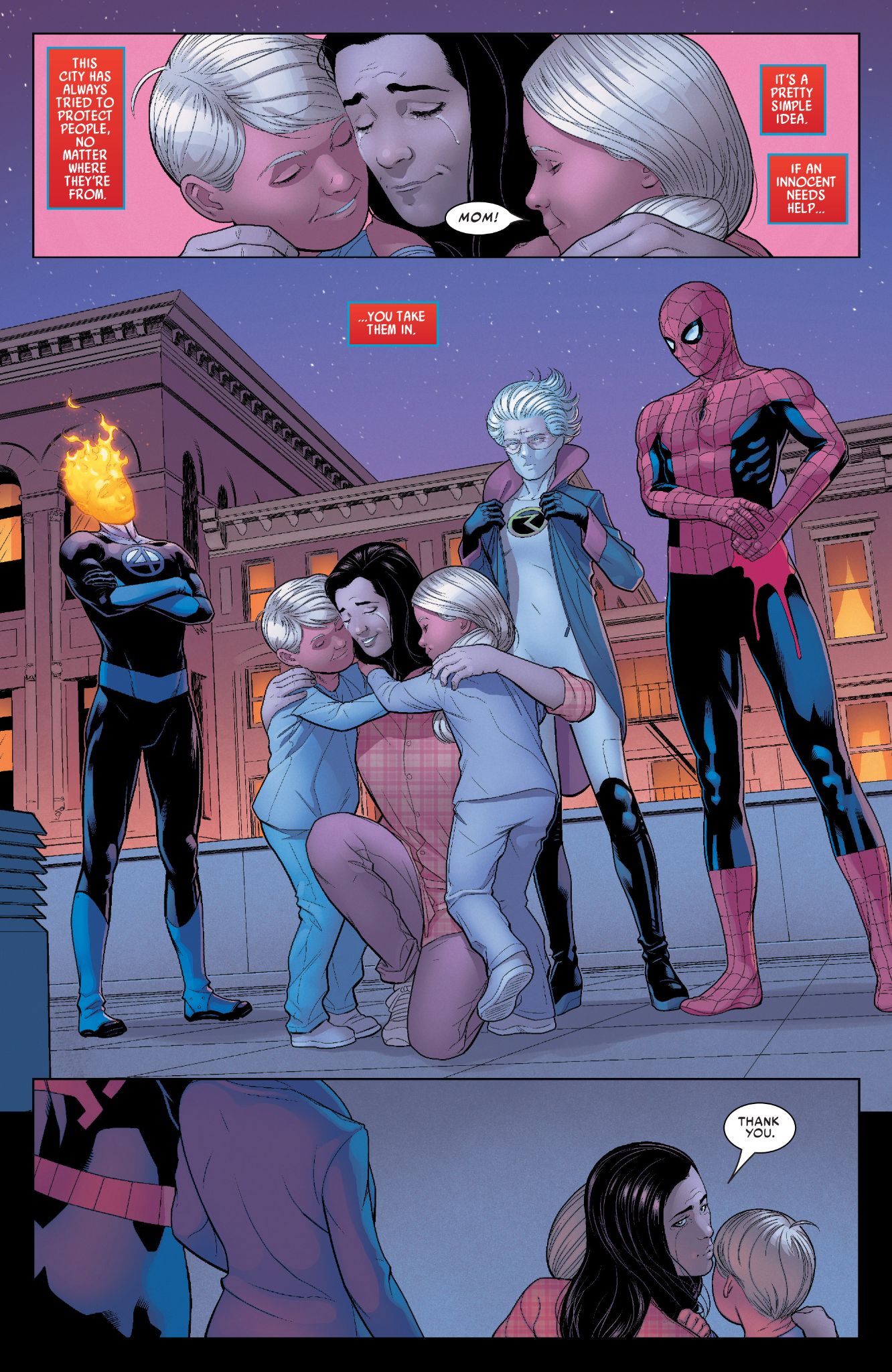 Of course, this is a New York still firmly placed in the Marvel Universe, and the wall-crawler teams up with several big-name heroes in the book. However, Taylor uses these interactions to further define Peter’s role, contrasting the celebrity status of “bigger” heroes like the Avengers and Fantastic Four with the wallcrawler’s everyman heroics. Other heroes might save the people of New York from time to time, but Spider-Man lives among them. He’s a neighbor. A friend. Someone who wants to make his home a better place both in and out of costume.

While other writers made Peter and his alter ego opposing forces, and built the story around that balancing act, Taylor takes a different approach. Having Peter untethered from his previous jobs, Taylor focuses entirely on his dedication to his community, and raises a powerful question: does the hero have what it takes to protect everyone at once? 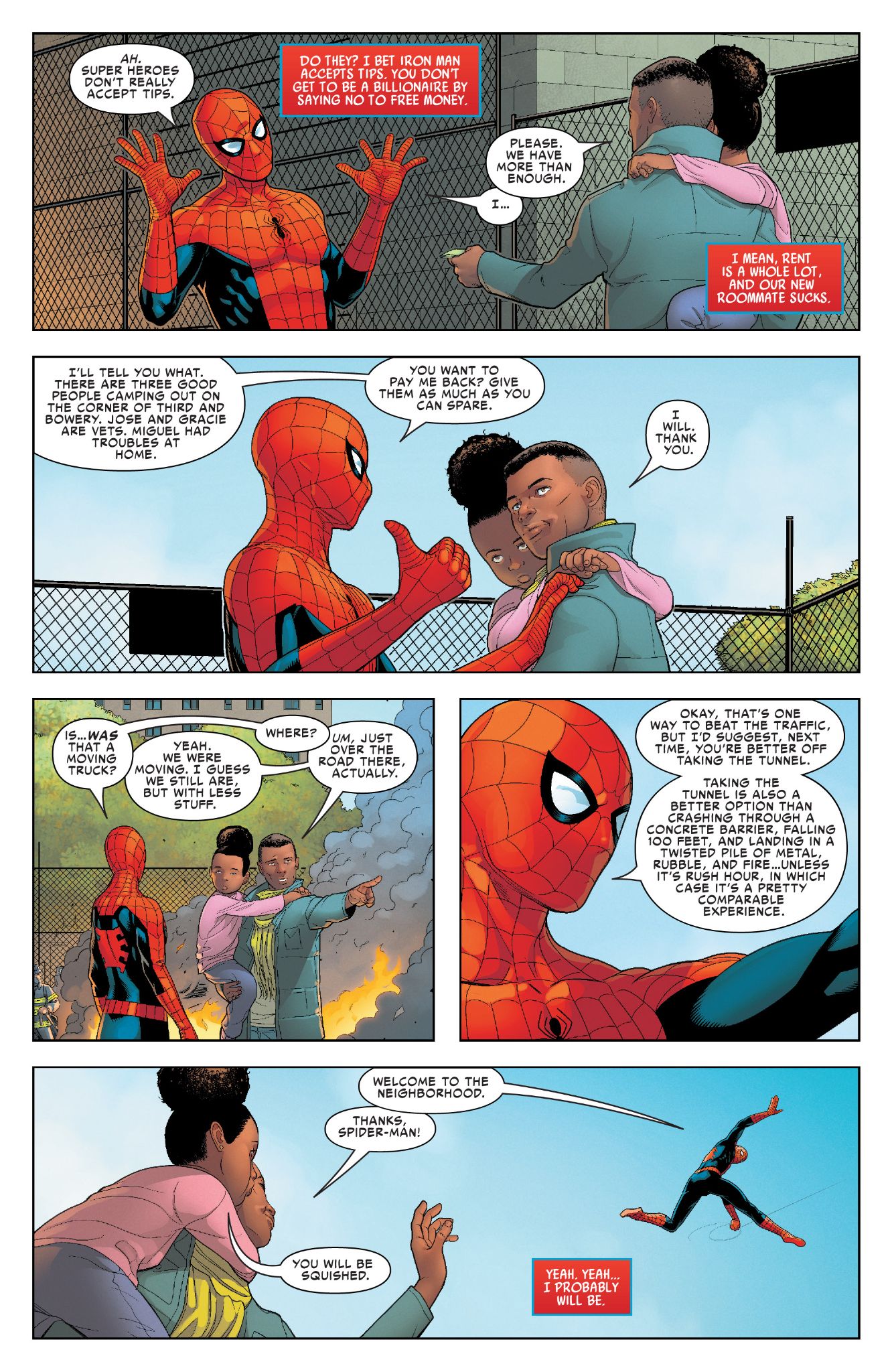 The Fear of Sudden Responsibility

Taking place between the runs of writers Dan Slott and Nick Spencer, Friendly Neighborhood Spider-Man begins with the wall-crawler at his lowest, but more focused than ever. Having lost his company, his doctorate, and his job at the Daily Bugle, Peter falls back on his friends and family for support, rekindling his relationship with Mary Jane Watson and building deeper connections with the people in his neighborhood, as both civilian and superhero.

Taylor builds on these new connections through Peter’s time as Spider-Man throughout the story. In place of the standard battles of good and evil, Spider-Man deals with more complex problems within the community. These range from building a sanctuary for a refugee family, to helping a troubled kid leave his abusive home, to taking down systemic corruption alongside a former villain, but the emotional peak of the story is reached through its sixth issue, titled Spider-Bite. While the issue begins with outlandish superheroics, Taylor slowly unmasks a much more human story underneath, revealing Spider-Bite as a terminally ill child named Nathan, and the issue’s adventures as a show put on by Spider-Man and hospital staff to raise his spirits. Previous stories may have been built on Spider-Man’s strength or wits, but Taylor uses moments like Spider-Bite to channel a deeper strength for the character: his limitless empathy.

As Spider-Man tries to solve these problems with more nuanced solutions, he’s put in the path of the story’s real villains: a secretive overclass in New York who feed on systemic abuse and exploitation. While these threats shock Peter out of this new normal, driving him deeper into his alter ego, it’s a cancer diagnosis for Aunt May that becomes the book’s primary struggle. Slowly spiraling over the news, Peter begins to fully retreat into Spider-Man, trying to distract himself from the one problem he can’t solve. May’s health has always played a part in Spider-Man stories, but it’s Friendly Neighborhood’s focus on the supporting cast that gives this development a new level of emotional weight, highlighting both May’s strength and Peter’s growing insecurity as they both process the ordeal. 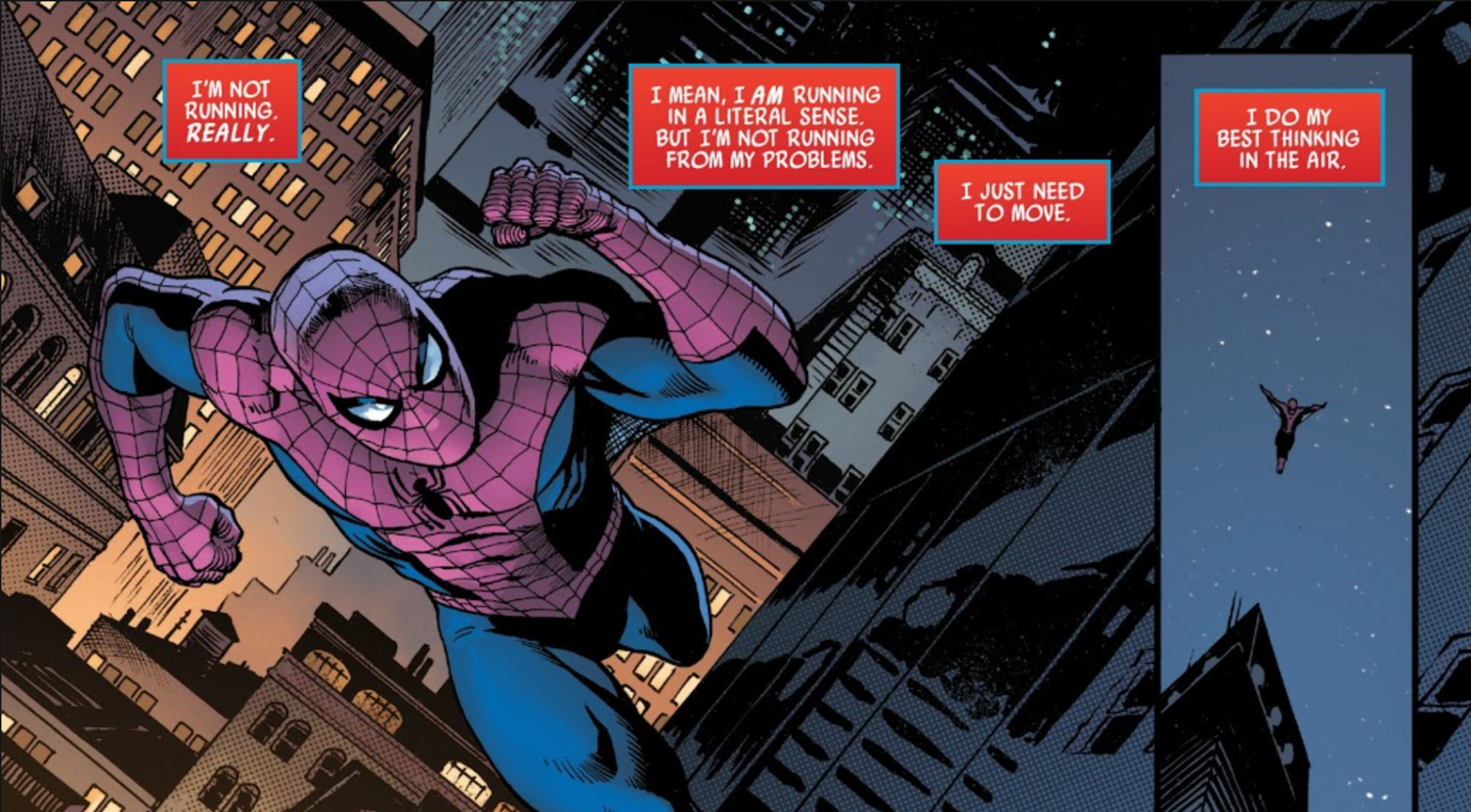 Driven by a mix of grief and inherent responsibility, Peter spends most of the run pushing himself to save everyone he can, often at the cost of his own personal wellbeing. While this dynamic has often been used to show the inherent tragedy of being a superhero, Taylor also makes Spider-Man’s selflessness into his greatest strength throughout the story, shown through the many small but important marks he leaves on his neighborhood. Spider-Man’s victories are small compared to some of the other heroes in New York, but Taylor makes a point of showing that these small deeds build on each other, as more and more of Peter’s fellow New Yorkers start to follow his example. It’s this spirit of community that gives the series its greatest triumph, with Spider-Man’s friends coming together to let him stay with May through her surgery.

Spider-Man has had his share of bombastic stories over the years, but it’s Friendly Neighborhood’s grounded, human presentation that distinguishes it from the wallcrawler’s other works. Taylor’s voice on the book is unmistakable, imbuing every interaction with the perfect blend of heartfelt charm and awkward humor that makes Peter Parker feel believable and relatable. 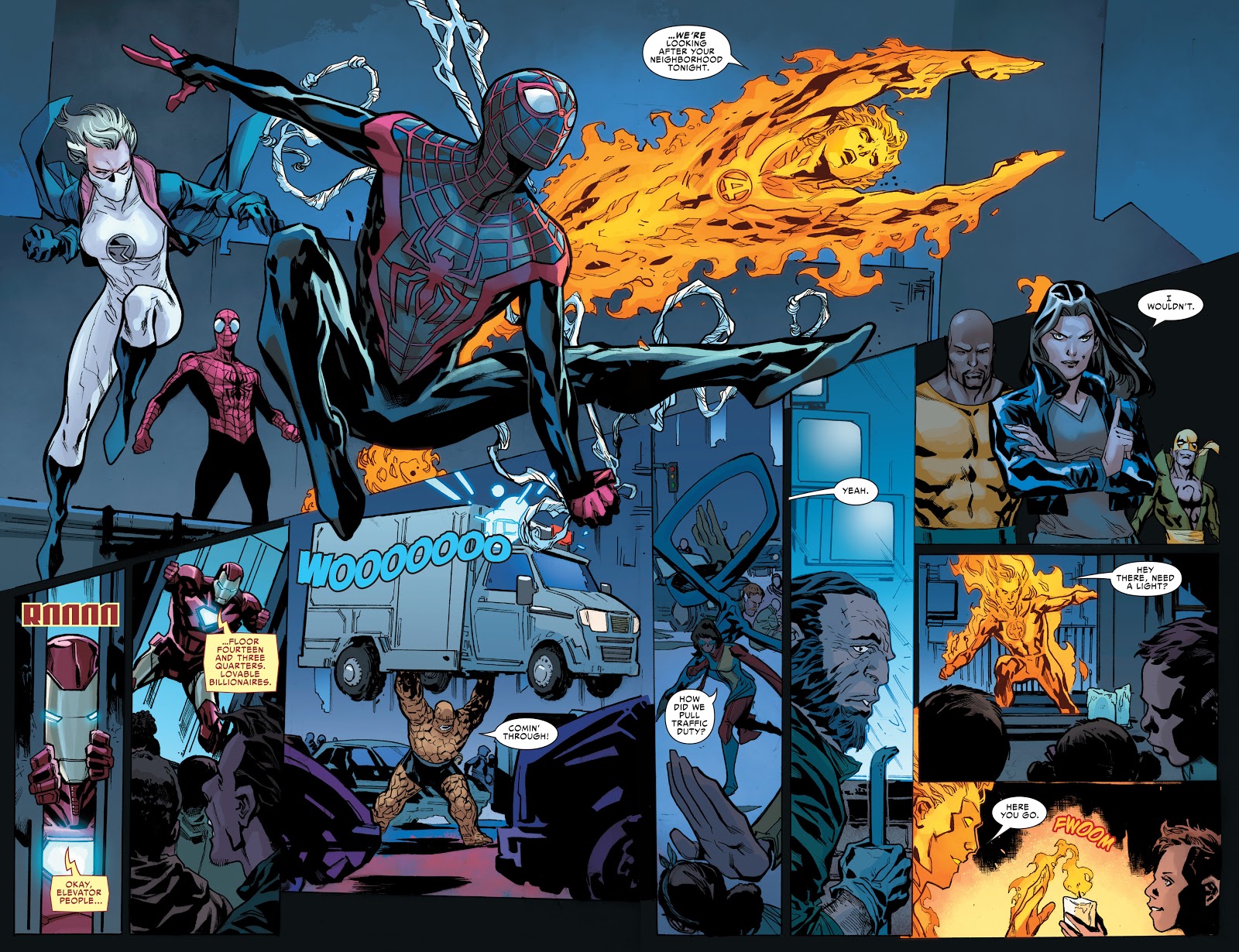 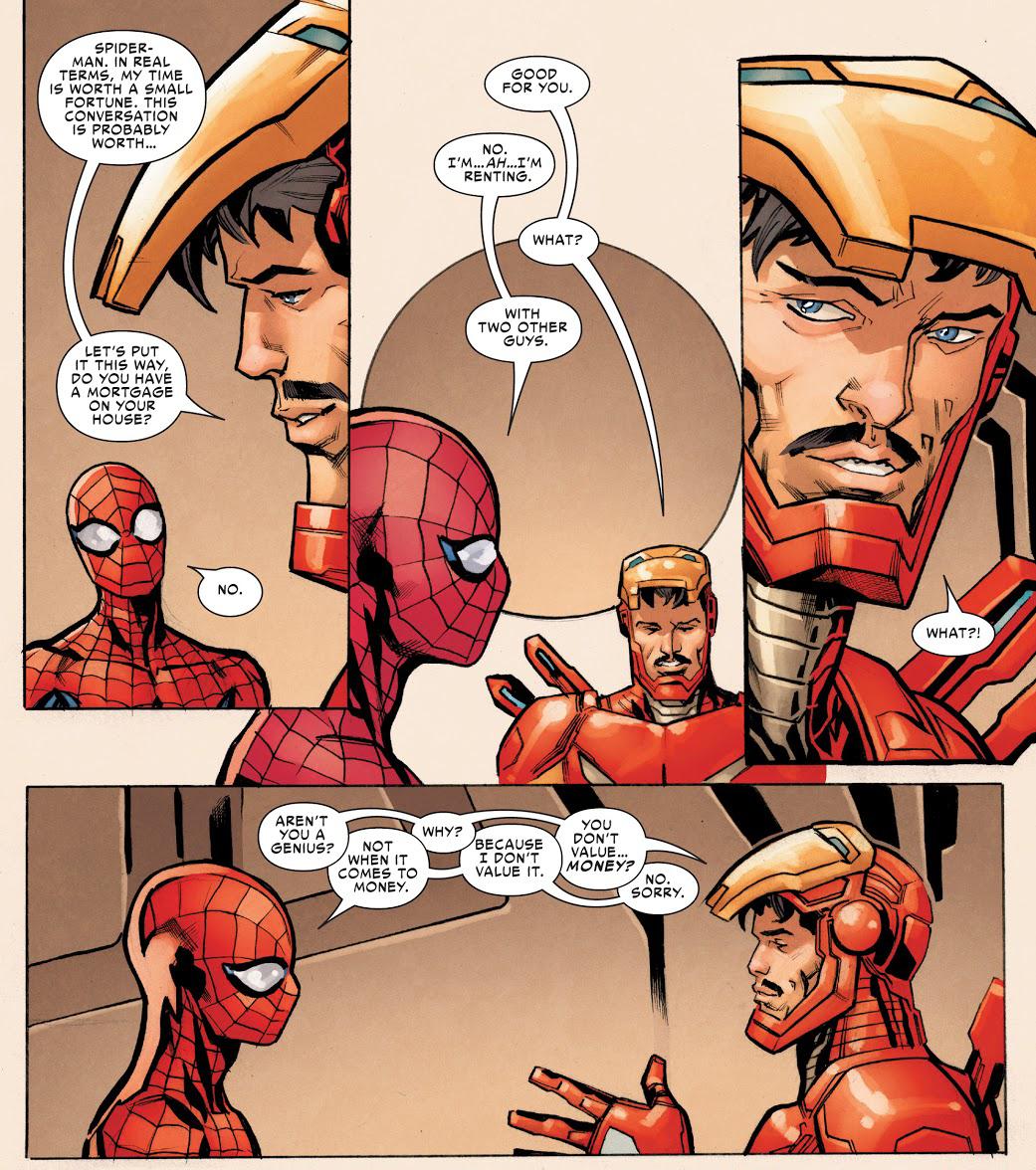 Taylor’s more human take on the character is elevated through the roster of artists he collaborates with across the series’ 14 issues. Most of the run is drawn and colored by Juann Cabal and Nolan Woodward, who bring a more playful energy to the story, but later issues incorporate different artists to sell different tones and emotional beats. Yildiray Cinar’s dramatic, expressive art carries heavier beats like Peter’s talks with May, Ken Lashley’s dynamic, angular pencils heighten the wall-crawler’s heroics, and a larger roster of guest artists flesh out the enormity of the climactic battle with Under York. While the transition between styles and subject matter can be jarring sometimes, it’s all in the service of Taylor’s story, painting the many shades of Peter Parker as he fights to find balance in his life.

Friendly Neighborhood Spider-Man has its share of grand adventure and amazing spectacle, but that’s never the focus of Taylor’s story. Rather, the book follows the small heroic moments in-between: checking on your neighbors, giving someone a second chance, or helping a loved one through a challenging time. Peter Parker is a character often defined through tragedy, with his dedication to responsibility taking over the rest of his life. However, through Taylor’s story, we finally see that selflessness rewarded and affirmed, as Peter’s community becomes his greatest strength. While superhero stories have grown in scope and scale over the years, Friendly Neighborhood Spider-Man leaves its readers with a relatable, powerful call to action: you don’t have to save the whole world on your own to make a difference. Sometimes, all it takes is helping out a neighbor, and trusting them to do the same.