If you were to ask comic readers what Big Two character had the most consistent or strongest publication history, you’d be hard-pressed to find an answer beyond Daredevil, especially Daredevil after Frank Miller’s revitalization of the character. Between Brian Michael Bendis and Alex Maleev in the early 2000s, Mark Waid and Chris Samnee in the early 2010s, and Chip Zdarsky and Marco Checchetto’s current run, most people would only be able to point to a handful of stories that didn’t meet the high bar of quality they’ve come to expect from the character.

Charles Soule’s run has a bit of a weird reputation in the midst of this, though. It followed the beloved and subversive Mark Waid run, taking every significant change from that run and undoing it. No longer was Matt in San Francisco, he was back in Hell’s Kitchen. His delightful love interest Kirsten was nowhere to be seen. His secret identity was back to being a secret. It would be hard for anyone who enjoyed Waid’s run to not balk at this abrupt change, especially because the story refused to explain how it happened for a year. But with the omnibus coming out

, it seems like a good time to look at the run as a whole story. 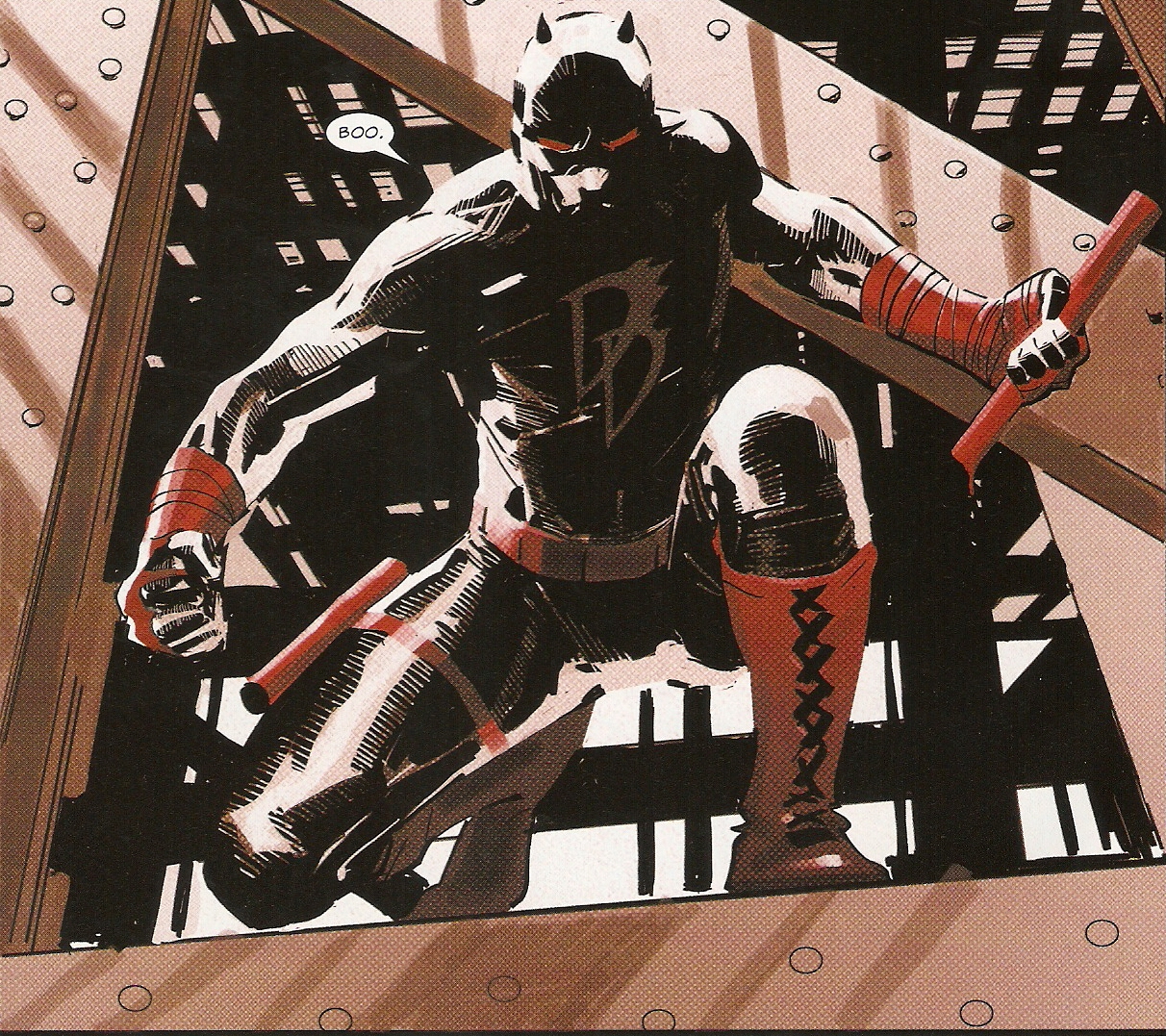 What was most surprising to me is how the impressions I had of the run reading it monthly changed very little after reading it all in one go. The first year’s worth of stories was honestly not very exciting, especially the opening arc, while everything after that opening stretch is significantly stronger. But now I understand why that is.

“My name is Daredevil. And I am not afraid.”

The entire first act of the run is table setting. Soule is trying to establish this old, yet new status quo for Daredevil as a character. He’s in Hell’s Kitchen again, he’s got his secret identity back, he’s a lawyer again. It’s “standard” Daredevil, even if it’s wholly unrecognizable from the finale to the prior run. But it’s not all the same.

First and foremost, Matt is no longer a private attorney with Foggy Nelson – he’s a member of the District Attorney’s office, prosecuting rather than defending. He’s also got a new apprentice, an undocumented Chinese immigrant named Sam Chung, AKA Blindspot (one of the best additions of the run). These changes are both given a lot more depth than one would expect from a Big Two comic, in large part due to Soule’s background as an immigration lawyer.

The problem is this portion of the run doesn’t get to do anything hard-hitting or emotionally devastating in the way that we’ve come to expect from Daredevil as a title, because it spends so long explaining itself and how this new status quo affects Matt and the people around him. There are 9 issues, an annual, and a Marvel Infinite Comic all centered on introductions and establishing the groundwork for this run, none of which are telling very compelling stories.

Ron Garney and Goran Sudžuka are the primary artists for the majority of the run, and they both establish a clear tone immediately. Garney’s scratchier and more impressionistic, while Sudžuka tends to draw cleaner lines while maintaining the atmosphere Garney creates. Matt Milla’s coloring is a bit less consistent, as he often uses a greener palette that ends up making Garney’s art look worse than it actually is. This clears up throughout the run – it’s definitely at its worst during these opening arcs. Which is unfortunate, because the opening arcs are the most in need of some enhancement.

Thankfully, once the run hits the gas pedal, it never slows down.

If there’s one thing that can be said about Charles Soule’s tenure at Marvel, it’s that he genuinely tried to do something new with nearly everything he touched. That extends to Daredevil, where Soule really tried to put new toys in the box rather than simply play around with everyone else’s. Blindspot is a great example of that (although he’s frustratingly not shown up anywhere since), and Tenfingers is a poorer one. But Soule’s run on Daredevil hits its stride when he introduces his third new character — Muse.

Muse is the greatest creation of this run. Soule and Garney work in tandem to create a villain who’s creepy and sinister. A performance artist who exclusively works in the macabre, an antagonist whose actual work can’t be truly perceived by Daredevil. Muse’s presence in the run serves as the intangible, primal fear of the unknown. Matt’s blindness has managed to not be the biggest detriment to his superheroing (since he has that radar vision), but Muse’s entire existence runs counter to that. Sure, Matt knows that he’s killing people, but he’s incapable of comprehending just how horrifying Muse’s work is.

“Dark Art” is the arc where this Daredevil run clicks because it’s the arc where Matt is forced to feel despair again. Which I realize is a sadistic thing to say, but Daredevil as a character works because not only does he put himself under inordinate pressure due to his Catholic guilt, he also is forced through the wringer almost constantly. Suffering is the spice of the book, it’s what makes the rest of the street-level superhero antics work.

The only non-positive thing I have to say about the arc is that the presence of the Inhumans immediately ages this book, as it’s clearly from the era where Marvel was pushing the Inhumans as the replacement for the X-Men, as the film rights for the X-Men were still with Fox. It’s a weird layer on an otherwise really strong story.

“Is this a confession, or a story?”

“Dark Art” is followed up by a quick two-parter about Matt trying to earn money quickly before finally giving us the explanation for how Matt got the world to forget his secret identity, and how this wasn’t necessarily a good thing. It’s another edition of “The Suffering Of Matt Murdock,” a consistently great Daredevil story.

This is immediately followed up by what is to me the crowning achievement of the run – the story that made decades of Matt’s lawyer backstory pay off. “Supreme” is the ultimate escalation of Matt’s career as a lawyer, his greatest case. It’s where he takes to the Supreme Court to fight for the legal rights of superheroes as witnesses for crimes. What makes this arc hold together (and seemingly the reason Soule was ambitious enough to aim for it in the first place) is because of his own background as a lawyer. Just having the knowledge of legalese to somewhat accurately simulate a court case makes this entire arc feel meaningful and legitimate rather than contrived. Obviously there’s superhero drama in the midst of all of this, but the legal drama of Daredevil as a title has never been stronger than it is in this arc.

The Garney era of Daredevil concludes shortly after this arc, as Matt goes to China in “Land of the Blind”. It’s a gorgeous arc, unlike most Daredevil stories that are set in the same grimy (if atmospheric) city. It’s also the centerpiece of Blindspot’s character arc, the story that establishes exactly who he is as a person. It’s the end of this entire second act of Soule’s Daredevil, from Dark Art to here. 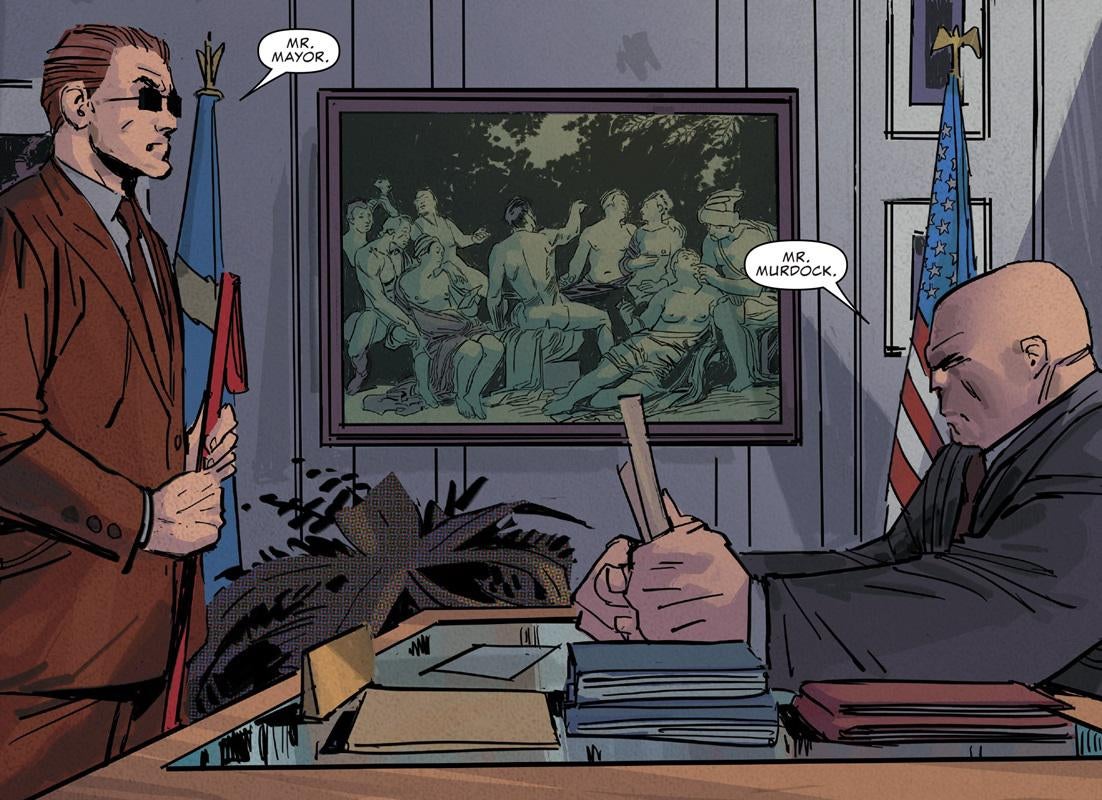 “Wilson Fisk knew how to save the city, if only they would let him.”

The final act of the run goes back home, and deals entirely with the politics of New York. See, while Matt was in China during “Land of the Blind”, the Kingpin won the election for Mayor of New York. Obviously, this status quo is inspired by or based on the Trump era of the United States, but rather than just dwell on obvious and tiring comparisons, Soule remembered that a story needed to be told, and told a riveting one that wove together the entire run beforehand to deliver a hard-hitting climax.

The “Mayor Fisk”, “Mayor Murdock”, and Mike Murdock arcs were all punchy and fun in a way that really worked. Soule used his desire to create new ideas with the Dragon Priests, and also his enjoyment of continuity with Matt’s fake-now-real brother Mike. The downside is the new art teams, who just don’t have the same sense of atmosphere and flair as Garney and Sudžuka. Mike Henderson and Phil Noto are good artists, but their styles feel incongruous with the run.

Which, unfortunately, is why the ending of the run is fairly weak. It’s better than that opening act, but “Death of Daredevil” feels disjointed with the rest of the story, because Noto’s art is just too ethereal and light to match with what Daredevil tends to be. It also doesn’t help that it tries to be a “Greatest Hits” of Daredevil, trying to squeeze every possible callback into the one story to really feel like it could be the “Death of Daredevil.” The story ends up feeling meaningless and without stakes, especially in the last issue which, without spoiling, makes it clear that the events of the previous issues don’t matter. Soule ends the run on a circular quote, affirming who Daredevil is, but it just ends up feeling like a letdown after a strong run prior.

But even with this weak ending, Soule’s run has earned its omnibus. It’s a run that tries to do something new every arc, and succeeds the majority of the time. It’s unlike every Daredevil run before it, and is definitely worth the read.