The problem with writing about Crossover #1

is that the most interesting aspect of the book occurs on its final page. It’s a combination of text and image that retroactively changes how the issue is read. The implications of the page would require thousands of words unpacking (among other things) why Mark Waid is editing this book, the rise of conservatism within superhero comics since 1986, the tendency to distort ideas into mere buzzwords, one of the many reasons why I no longer have any faith in humanity, a truly wretched and distasteful Tori Amos analogy about the difference between Donny Cates and Mark Millar, why the Captain Marvel cameo was recolored despite him being a public domain character, the acronym DSHKBAWKA, and the time no one noticed Superboy gruesomely (if accidentally) killing a cat.

And this would all make for a pretty damn good review if not for the ethics of explicitly talking about the final page in a review not only predating the comic being released, but also one provided by the publisher of said comic (Ed: Thanks, Image!). It can be implied, sketched around, but it cannot yet be stated. As such, the task at hand must be focused squarely on what is known to the public. What can be talked about. And, in fairness, there are things to talk about beyond that final page.

The main conceit of Crossover #1 is imagining a world where nerds are an actual oppressed group of people. To say that this idea is in questionable taste would be an understatement. Putting aside the implications of using Westboro Baptist Church rhetoric on a demographic framed within the comic as predominately white men, the history of nerd culture is, shall we say, uncomfortable to say the least. Among the many ugly actions of nerd culture, you have the tendency for con-goers to sexually harass booth babes, the normalization of abuse within fandom circles such that death threats are considered part of fandom drama, and a general history of male fans kicking women out of spaces they forged and remaking it in their own image.

But the most notable instance of fandom cruelty is that of #gamergate. #gamergate was a harassment campaign that began in 2014 wherein an ex-boyfriend wrote a salacious op-ed about Zoë Quinn wherein he argued that she was sleeping around with several critics in order to get a better review score on her game, Depression Quest. This spiraled, intentionally and not, into a full blown right wing terrorist cell wherein several women were harassed, threatened with death via explosion, and actively attacked for the crime of being female in a nerd space. It was fueled by, among a number of fans, the Right-Wing news website Breitbart and one of its writers, Milo Yiannopoulos. While #gamergate’s main goal of getting rid of the women infecting nerd spaces ultimately failed miserably, it did act as a lead balloon to see who to contact when a right wing presidential candidate needed to be elected into office. The success of that is very painful.

So making a comic about nerds being oppressed like minorities in a post #gamergate era is questionable to say the least. Equally troublesome is Crossover’s uncritical appropriation of the works of Fredric Wertham and his study Seduction of the Innocent. For those unaware, Wertham was a psychologist whose aforementioned study (along with other, less famous arguments against the comic book medium) led the way to the Comics Code of America and, subsequently, a rise in conservative politics in the Superhero genre that would lead creators like Eric Kripke and Alan Moore to argue that the whole genre is inherently fascist. While his study did have some good points about body image, it’s ultimately let down by, at best, shoddy research, a belief in reproductive futurism, and homophobia. His disdain for the medium, and the superhero aspect of it in particular, is palpable.

To be fair to Crossover #1, its invocation of Wertham has a degree of tongue in cheek. Opening the issue by contrasting his words with a simplified take on the superhero genre by Todd McFarlane is an obvious gag, but one that could theoretically work. And the side character Otto wearing a ‘Wertham was Right’ T-Shirt, while questionable in terms of taste, is again a solid gag. But there’s a degree to which it’s not doing enough of a critique of Wertham’s work in its invocation, to say nothing of the anxiety nerd culture has for Wertham even decades after his death. As if not mentioning or invoking him in every single piece of comics about comics about comics about comics will cause him to come back from the dead and kill the industry. 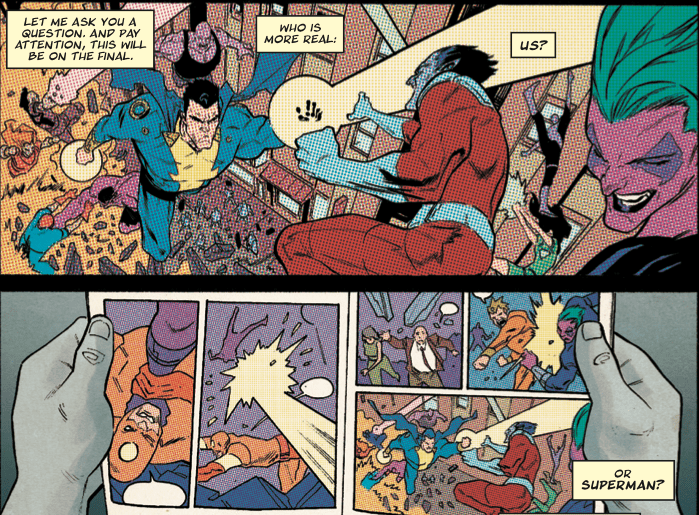 It should be noted that all of what I’ve just written is only a part of the core conceit of Crossover. The full conceit asks the question: “What if an event comic on a multiversal scale actually invaded our Earth?” And there are certainly a lot of fun things you could do with that premise from having fictional characters from other Image Comics (or what have you) appear, or have the fictional characters be an oppressed race due to the violence and mass slaughter the crisis has brought upon the world. And, to the book’s credit, it does some of those things.

The problem is that it applies them clunkily. Nowhere is this more apparent than in the narration that funnels throughout the book. With previous efforts at narration, Cates has shown a great degree of strength, able to create a mythic quality to the lives of mundane characters and suck you in. With Crossover #1, however, the narration feels obtrusive. Like it’s trying way too hard to be about something (be it the nature of reality via a CliffsNotes Supergods

, hyping up the story, or introducing us to people).

Nowhere is this more apparent than in the final portion of the narration in the issue, wherein it hastily declares this to be a love story between two characters. One of whom the issue actually focuses on while the other is essentially given filler dialogue that tells us nothing about him.

Now the set up to an unlikely romance can work. Consider Ales Kot and Tradd Moore’s The New World

, wherein we are introduced to two characters who barely interact, but we are given so much detail. It should be noted that that the first issue of The New World was a double length issue, and thus arguably a bad comparison. (Though I would note that a lot of Crossover #1’s challenges could have been resolved if the issue was released as a double sized issue.)

As such, let’s instead compare it to a recently released #1: Rorschach

by Tom King and Jorge Fornés. Much like Crossover’s first issue, Rorschach is a rather slight comic with a somewhat problematic premise (in Rorschach’s case, a murder mystery following up on the acclaimed graphic novel that questionably, if not tastelessly, involves the real life tragedy of Otto Binder) that’s less interested in introducing characters and more in setting up the plot and some of the thematic interests. Where they differ is in execution. In Rorschach, there is no narration beyond character narration. The details are largely presented to us via Fornés art and coloring by Dave Stewart.

Conversely, Crossover more often than not has narration explain what’s going on rather than allow the art to speak for itself. Which is a shame since Geoff Shaw and Dee Cunniffe are doing tremendous work with the material. Shaw is one of those artists you would think couldn’t do larger than life sci-fi material, let alone superheroes, yet routinely shows the contrast between the mundane and the bizarre. Cunniffe, meanwhile, is capable of depicting the contrast between the real world and the comic book characters infecting it with such a masterful touch that it’s a real shame narration has to tell what we clearly see.

And John J. Hill’s lettering work, while not the star of the book the way a Bidikar or an Otsmane-Elhaou can be, is nevertheless fantastic. To be completely fair, there are some moments of spark with the idea as presented within the context of the single issue when Cates gets out of his own way. For example, the implication that cop comics would be a leading replacement for the superhero genre speaks volumes about an understanding of the material history of the Comics Code, moreso than any billboard declaring “God Hates Masks” or narration pontificating over the nature of Superheroes when you just want to enjoy your Hot Wings in peace.

Ultimately though, the book is probably Cates’ weakest number one I’ve read; a story that, much like Rorschach #1, fails to actually sell its premise well while not actively a bad comic. It’s, at worst, meh and, at best, something that works better in a trade. But where Rorschach #1 is let down by its structure befitting the first chapter of a graphic novel instead of a single issue, Crossover #1 is too enamored with its own premise to do anything except chew our ear off about how great superhero comics and superhero fans are. And the case it makes, ultimately, is a bit weak.

And then there’s that final page where…