, the fifth trade paperback of Jed MacKay’s Black Cat run, and the second of the series that began with the relaunched Black Cat #1 in 2021, wraps up the storyline with Black Fox, Felicia’s mentor.

The first issue in the trade, Black Cat #5 begins with Felicia and Black Fox meeting on Coney Island well before Felicia became known as Black Cat. In fact, what we are seeing is the moment when Felicia decides to take on the mantle that was once carried by her father before her. This scene acts as a prelude to what’s to come in terms of the dissolution of Felicia’s relationship with the Black Fox, reminding us of what he means to Felicia before he betrays her in the pursuit of immortality. 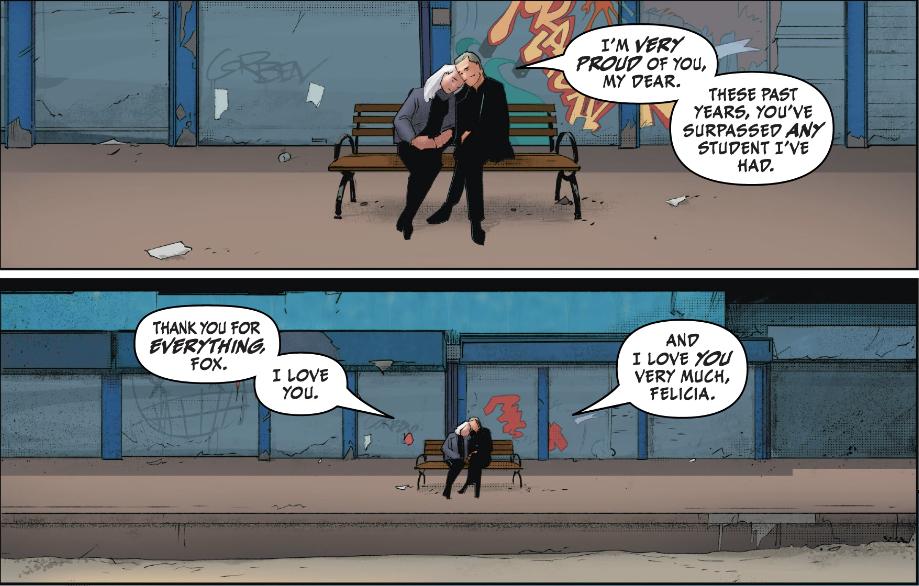 Michael Dowling’s art shines most in the more human moments of the arc, the realism of it adding a sense of, well, reality to them. The art does, of course, still work well during the more action-oriented parts of the story, but it should be remarked that it serves to elevate moments like Coney Island. After all, isn’t that the purpose of art in a comic? To elevate the words on the page so that, when viewed as a whole, the entire piece shines brighter than it would have were it just prose.

That moment on Coney Island not only sharpens the pain of Black Fox’s actions and presents a motif that bookends the arc in a way, but it also reminds us that, in many ways comics (like most stories) are about the relationships between the characters just as much as they are about the action. Throughout his career, Jed MacKay weaves stories filled with emotional beats that land just right. Whether they are moments that ring out loud and clear like the first Coney Island scene, or softer, quieter moments that aren’t spoken so loudly like Black Fox making sure that Felicia was included in the deal for immortality.

And what deal would that be? In exchange for Manhattan, the Gilded Saint, the patron of the New York Thieves Guild, will give the Black Fox and Felicia the immortality that he has granted the Guild. The consequences of this deal are that the entirety of Manhattan will be taken into the Saint’s Vaults, never to be seen again. Which is where Felicia comes in, after all, she’s a master thief. If anyone can steal from a god, it’s her. 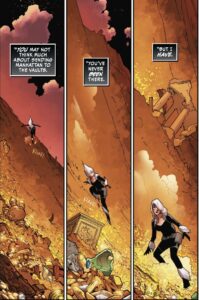 With some help from Odessa Drake and the rest of the Thieves Guild, Felicia is sent to the vaults where she does what she does best: she steals. The vaults are where Brian Reber’s coloring has its moment in the spotlight as he captures the glitter of the treasure that has been collected there by way of being sacrificed to the saint. Heaps of gold and jewels sparkle as Felicia makes her way across a vast, deserted wasteland to try to save Manhattan.

All of this is intercut by the framing device of Black Cat #7 which is Felicia relaying the story of how she saved Manhattan to the Black Fox as they sit on that same bench on Coney Island, something which leaves the reader with the thought that this is a common occurrence. These meetings between Felcia and her former mentor have happened often enough to have become a pattern worth pointing out when Felicia says, “you always do end up at Coney Island when we’re in New York, don’t you?” Once again, Dowling’s degree of realism pays off as much as his attention to facial expressions does, drawing the reader in and making sure that they know just how the characters are feeling.

The story ends just as anyone would have expected with Felicia saving the day (and the people of Manhattan). It’s a good ending, filled with human moments and light touches of humour when appropriate. Most of all, the ending feels like a solution that Felicia would come up with, something that she would actually do, even if it’s a hard decision to make. And it is an ending, there’s a real finality to it as it wraps up Felicia’s story with the Black Fox, one which started back in the first Black Cat #1 in 2020.

After The Gilded City wraps up, the final story in the trade is the annual which acts as part of the Infinite Destinies crossover. It’s a self-contained story that follows Felicia in South Korea as she teams up with White Fox and the rest of Tiger Division to save Taegukgi, another Korean hero who has been compromised by a family of gangsters. 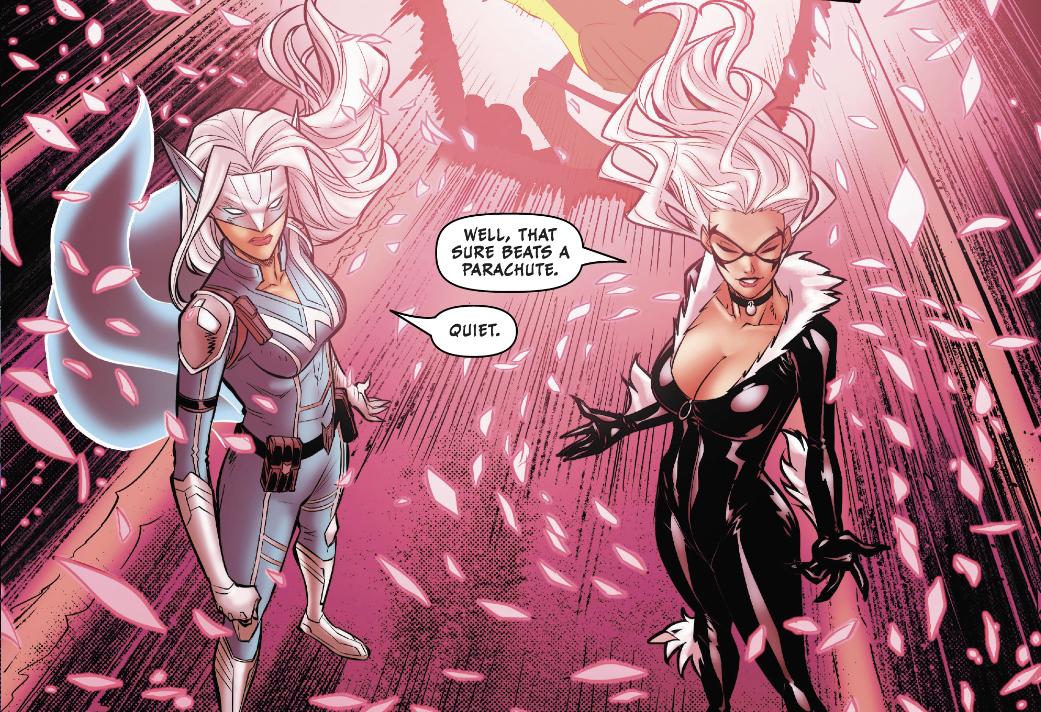 The story is drawn by Joey Vasquez and, while the art is good, it feels very male gaze-y at times, with attention paid to Felicia’s boobs and butt that distracts from what is actually going on. While it isn’t the worst comics art that I’ve seen in terms of adherence to the male gaze, it’s still a little bit rough. Aside from that, it’s a fun self-contained story that serves as a bit of a pick me up after the emotional heaviness of the previous arc. And the art is really good despite the male gaze-aspect of it.

All in all, I’ll Take Manhattan is a great continuation of the series that serves as a reminder of just how good Jed Mackay is at writing comics as he balances the fun that always comes with Felicia with the serious character-focused moments. Black Cat is good guys.