I was first exposed to Tyler Boss’ work, as I think many people were, in 2016-17’s 4 Kids Walk Into A Bank from Black Mask Studios, written by Matt Rosenberg. The miniseries tells the story of four friends who, well, plan a bank heist for a variety of complicated reasons. Rosenberg’s writing is charming, the voices of the kids clear and distinct. But what really wowed about the series was Boss’ idiosyncratic artwork.

4 Kids was a critical success, and it seemed a no-brainer that Boss and Rosenberg would follow it up quickly, and indeed, at February 2018’s Image Expo, they announced they were re-pairing, with a new series titled What’s The Furthest Place From Here? This new series seemed imminent, with the pair selling an ashcan edition of the first half of issue #1 in November of that year at New York Comic Con. The ashcan promised a smart, weird and moody comic, set in a near-future apocalyptic world with no adults. Alas, we waited and waited for a solicit that seemed to be forthcoming any month now, but never seemed to materialize.

Then, on May 16 of 2019, Boss tweeted out a cryptic message: a red emoji heart, a black emoji heart, the hashtag “#welcometopendermills” and an illustration showing a peculiar cast of characters and the edge of a “missing” poster:

The #welcometopendermills tease didn’t seem to have any connection to Boss’ next announced project, What’s the Furthest Place From Here?, and the hashtag wasn’t updated until five months later, in October. This tease featured emojis of a notebook and a red crayon, accompanying a picture of a young woman looking at a conspiracy wall. A carton of milk on a nearby table showing the missing young woman from the poster in the original tease, the papers on the conspiracy wall forming a weird spiral. 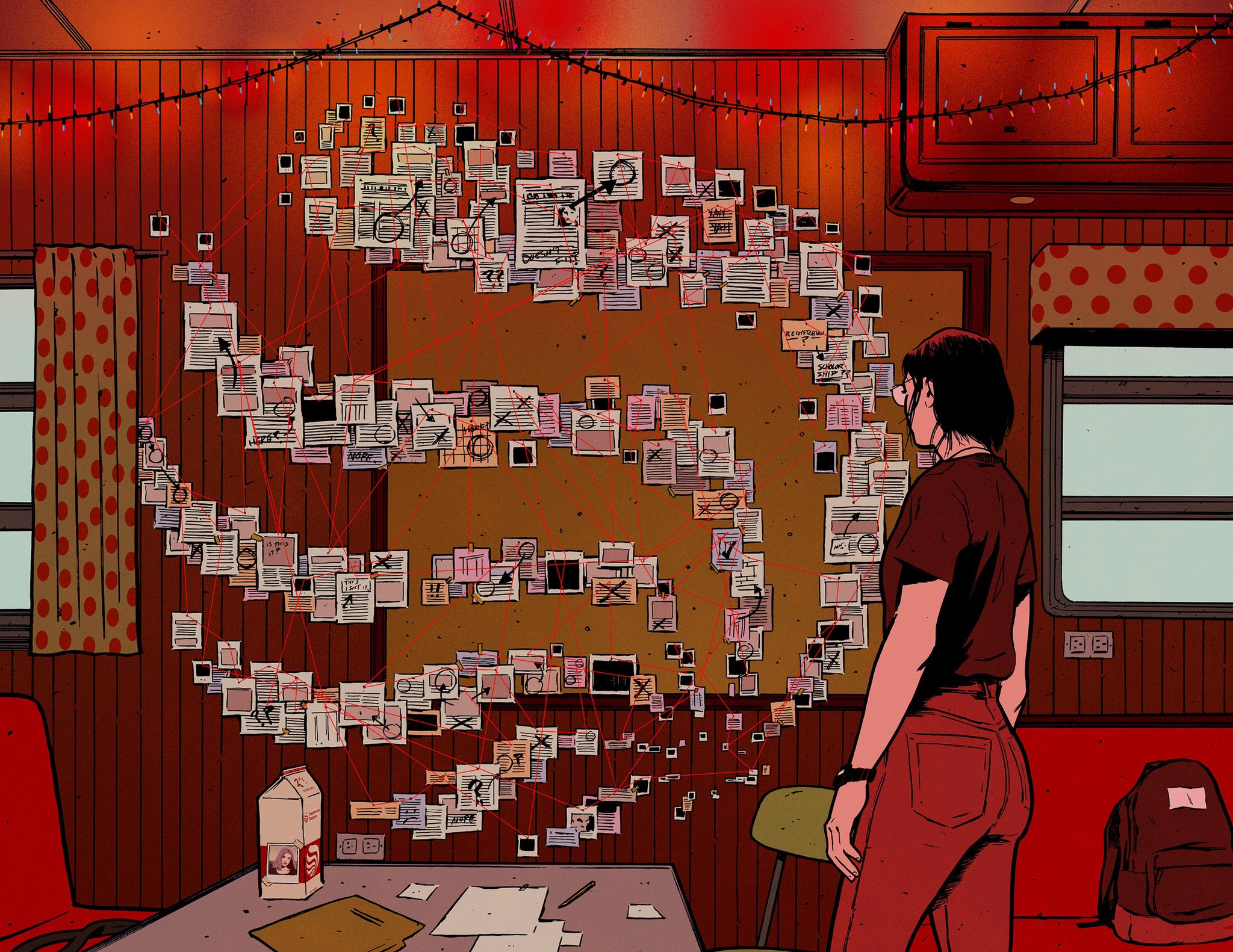 The teases continued through the end of the year, culminating in an announcement on January 16 of 2020 of a four-part miniseries entitled Dead Dog’s Bite

from Dark Horse. The mini would be a solo venture with Boss writing and performing all of the art and lettering duties, and would be released in April of that year. Well, as the poet wrote, “The best laid schemes o’ Mice an’ Men Gang aft agley.” With three of the four issues solicited, the Covid-19 pandemic shut down Diamond distribution, and with it, much of the American direct comics market. Dead Dog’s Bite was shelved and resolicited a year later, and the first issue was finally published on March 3rd, 2021. Just shy of two years after its first tease and more than three years after the announcement of What’s The Furthest Place From Here?

Which is to say, we waited a long time for Tyler Boss’ next project.

Dead Dog’s Bite is a story about a missing young woman named Mac Guffin. Or, rather, it’s the story about her friend who’s been left to sort out the mystery, Joe Bradley. Joe never gives up on finding her friend, even after the apparently apathetic town police have stopped looking, after the candlelight vigils have ended.

As she investigates, we meet the strange characters who populate the town of Pendermills. There’s mayor Quesling, dressed in a white cowboy outfit and senescent. There’s Ferg, who runs the pharmacy while both of his hands are in casts, constantly. Perhaps the most enigmatic character is Patricia Pendermills, the unspeaking owner of the Pendermills Peppermints company whose factory is the main employer for the town, dressed from head to toe in a black and white swirl imitating the spiral pattern of a peppermint candy, a motif found throughout the book, topped with a black mask over her eyes and scalp. The story is told by a mysterious, Rod Serling-esque narrator, who introduces each issue. His narration is often rambling and nonsensical, often at odds with the action shown on panel. His presence is both amusing and disconcerting, lending to the story’s surreal veneer.

Boss’ art has been compared to that of Chris Ware. The panels are always rectilinear, the pages ranging from 3 or fewer to 16 or more panels per page within the same issue. His work shows a technical draftsman’s attention to architecture that isn’t often showcased in monthly comics. When I think about Boss’ artwork, I think about spaces, both the spaces the characters occupy and the use of the space of the page. Often, he’ll repeat the same exact panel background for an entire page, forcing our focus onto the subtle differences of the actors in each panel, focusing our attention not only on what’s on the panel we’re reading, but on what’s changed between panels. Yes, this is Reading Comicbooks 101 stuff, but Boss exerts a level of control and restraint that’s rare: control over the reading experience, and restraint from shifting his camera around in the name of dynamics and action.

Since his work doesn’t often have much action, when you look at a Boss page as a whole, it’s often difficult to make out what precisely happens, and so he forces you to play a game of spot the difference as you make your way through the panels. This places an emphasis on emotion and performance, which Boss does more effectively than Ware, whose work is often emotionally distant (at least outwardly).

Boss’ use of color, too, is muted, though deliberate. The black and red heart emojis in his initial teaser tweet were made deliberately, as these are the dominant colors associated with our protagonist, Joe. Just look at these panels from the opening pages of issue #2: 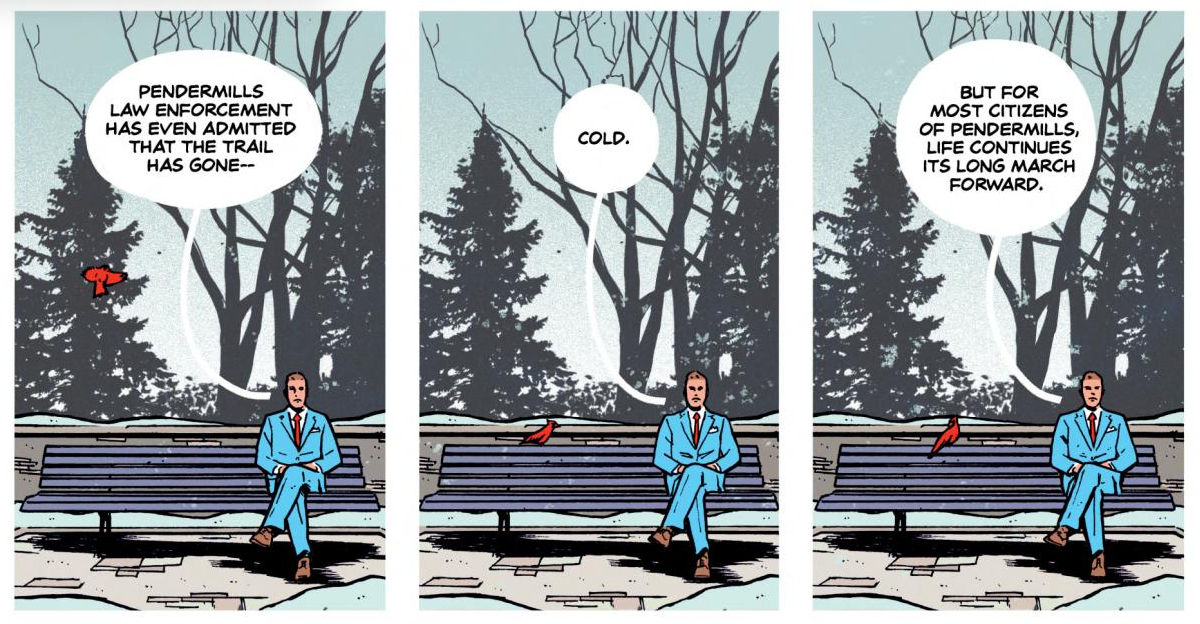 Notice how starkly the cardinal’s coloring stands against the cool coloring of the rest of the scene, as well as the saturation of the narrator’s suit. And then the next tier of panels: 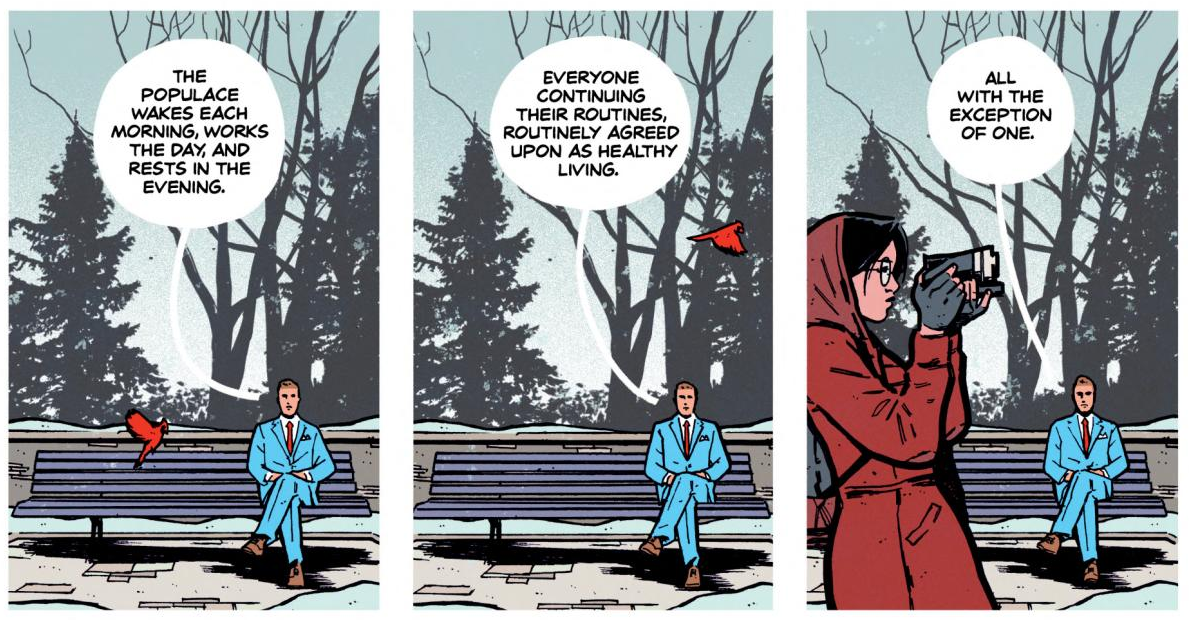 Here, Joe takes up the space occupied by the cardinal, both compositionally and chromatically. In addition to Joe, these are also the colors associated with the inside of the trailer where she maps out her investigation, as well as the candlelight vigil for her missing friend in issue #1. But as the trail becomes cold, and interest in finding Mac wanes, the robin’s egg blue of the narrator becomes the dominant color on the page. We see the warm/cool color dichotomy most starkly in issue #3, when Joe visits the home of Freddy Quil, the editor and publisher of the town’s newspaper. As Joe stands outside Quil’s house, the panel is split between the cool, uncaring outside of the winter storm and the warm inside of Quil’s home, representing the promise of answers within: 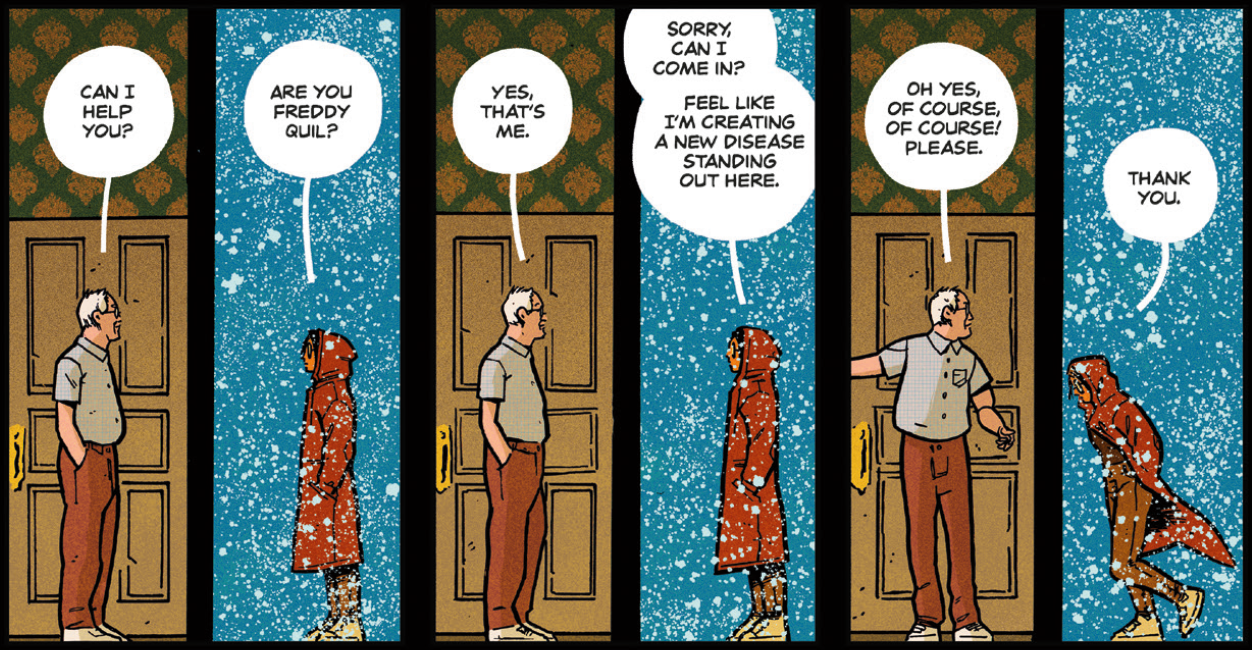 until the whole world is subsumed in snow at the end of issue #3: 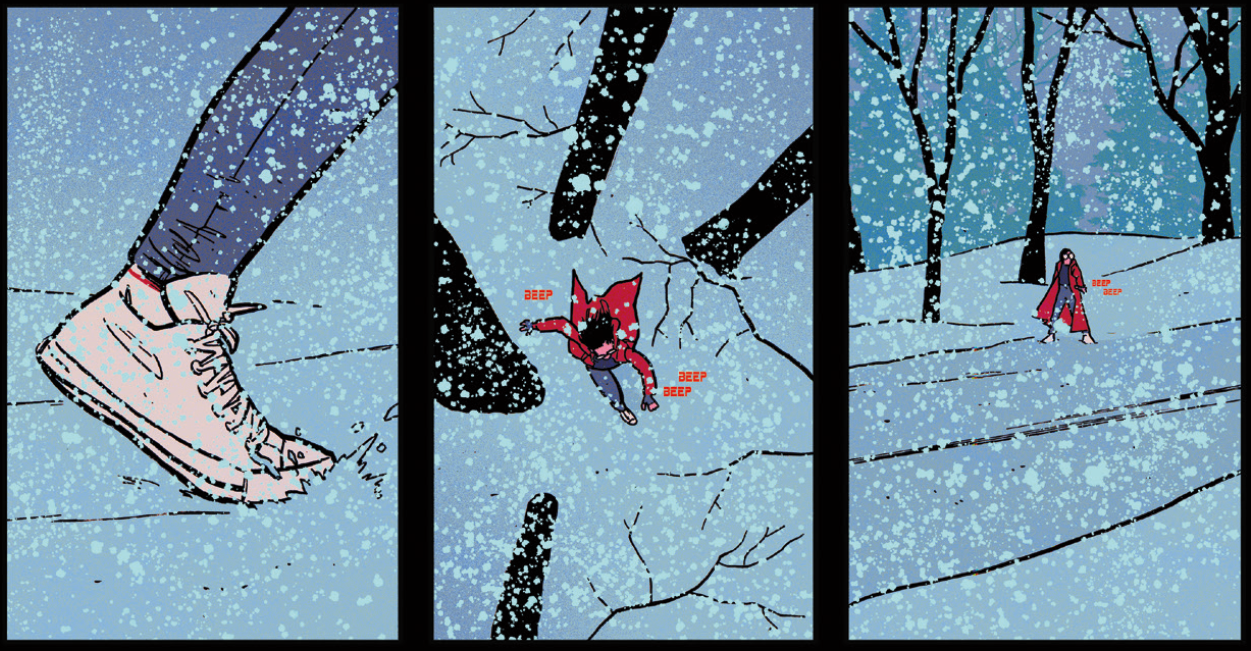 If the surrealist tone of the comic mimics Twin Peaks, the cultural touchstone in terms of genre is film noir detective media. All of the elements are there: the missing girl, the useless cops. The third issue even opens with the Narrator sitting in a movie theater watching Robert Altman’s 1973 adaptation of Raymond Chandler’s The Long Goodbye. Like a good noir story, the hero discovers not just the answer to the mystery, but uncovers something corrupt and broken at the heart of the world, that the systems governing their lives are not as they seem.

Dead Dog’s Bite is a comic that rewards re-reading. I myself have read through it three times: once as it came out in monthly issues, once immediately after the publication of the fourth issue (you’ll likely want to as well), and the full hardcover collection for this review. Either Dead Dog’s Bite is a very dense comic book, or I’m a dense reader, but nevertheless, each time I’ve read through it, I’ve picked up on new elements, from humorous flourishes to details that reframe my understanding of the story as a whole.

The hardcover in question is presented in standard single issue size, with red and black spiral endpapers. Bonus content includes preliminary sketches, handwritten script pages which include rough layouts, a variant cover gallery and commentary by Boss. Those hoping the commentary would contain revelations about the story you’ve read might be disappointed, as it consists of stories such as this:

When I was four, my family was packing up after a week of camping in the mountains. Sitting in my dad’s red pickup alone, I had never considered what the stick attached to his steering wheel did. As the truck and I rolled backward down the mountain and I watched my dad and brothers and cousins running after me I thought, “What could you do, even if you caught me?”

With Dead Dog’s Bite, Tyler Boss has established himself not just as a strong collaborator, but as a masterful solo creator, with a distinctive voice, a wry sense of humor and strong sense of the unsettling, the nostalgic, and the world weary.