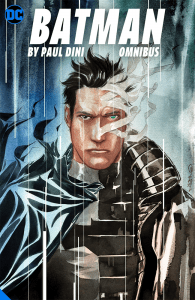 But Paul Dini’s Batman run is pure radio play. Through Batman: The Animated Series (B:tAS) and other works, Dini has proven that Batman, Gotham, and everything between them exists in a world of rumor, suggestion, and uncomfortable silences. The conflicts he writes feel unavoidable as opposed to obligatory, caused by characters who don’t know how to be anything else.

This is what’s made Paul Dini’s contributions to television, films, and video games so remarkable and have caused him to create or recreate some of the greatest villains in Batman’s history. And now, finally, DC has collected much of his comic work into an omnibus. Batman by Paul Dini gathers everything from his character studies to his continuing sagas. And in my opinion, it’s more than worth the money.

Hush was originally created by Jeph Loeb and Jim Lee for the eponymous story event. But, for my money, the character owes the most to Paul Dini.

Dini is fantastic at character work, remarkable at world-building, and can capture genre like nobody’s business. His style blends elements of classic mysteries, pulps, and 40’s era cartoons and can lead to stories that are both deep and easy to read. Which Dini absolutely highlights with his villains. See Detective Comics #826: “Slayride” for a great example of what I’m talking about.

How Hush Breaks That Mold

Dini’s standard M.O. is to establish villains as their own entities, occupying their own corner of Gotham City. In his hands, rogues like Mr. Freeze, Two-Face, Clayface feel rounder, fuller, more tragic, no longer dependent on Batman but better echoes all the same. Many share the same potential for heroism, only in their case, their violent fate has inspired something else.

But with the character of Hush, Dini takes the exact opposite approach. Tommy Elliot becomes a character impossibly tied to Batman, caught in some inescapable gravity. Dini proves this by first driving Hush deeper into his obsession, then by having the villain try to drive out, only to learn he can’t escape.

First, there’s Batman: The Heart of Hush, which expands on Tommy’s origin story and gives some truly chilling details as the character explains his hatred for the Wayne family (Bruce especially.) Here the character is the most in control, though the audience watches how his progressing revenge twists that notion.

Batman: Streets of Gotham: Hush Money is set immediately after the events of Batman: RIP

. With both Bruce Wayne and Batman dead (at least, momentarily), the question becomes: Who is Hush now that his greatest enemies are gone and his purpose ruined? Dini’s masterstroke here is showing how the deaths shattered the character’s already fragile psyche.

Batman: Streets of Gotham: House of Hush concludes in a burst of madness. With a violent fate once again standing between him and his plans, Hush becomes desperate, launching a final assault on the Batfamily.

Nguyen’s art is fantastic pretty much throughout. His covers have a bit of a David Mack to them, while his interiors wink and nod to Mike Mignola, making this a fantastic pairing of beauty and brutalism. But if there’s one detraction I have, it’s over Dini’s use of quotes which feel leaden and overwrought here. 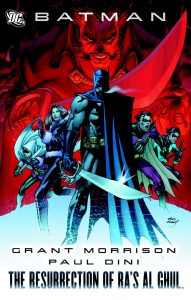 The Lowlights: The Resurrection of Ra’s al Ghul

There are times when one wishes publishers would be perhaps a bit less thorough with their omnibuses. This is one such case.

This story was published during Morrison’s R.I.P. event and was meant to tie into the spirit of the “Batman and Son” story arc. As a recap, R.I.P. was the event that introduced Damien Wayne, the son of Bruce and Talia al Ghul, and eventual Robin. With the renewed focus on Batman and Talia’s history, someone clearly thought this was the opportune time for Grandpa Ra’s—who’d been dead since 2003’s Death of the Maidens—to come back to life in a big, complex event. 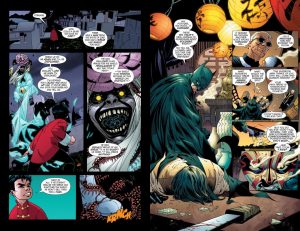 Insanity and the Lazarus Pits

Unfortunately, Resurrection never comes together. The book has at least nine creators on it, which is a ton of artistic voices on a good day. But here they feel practically at cross-purposes as each one tries to create their own interpretation of an already complicated story. Bringing Ra’s back after a six-year absence while establishing his grandson was probably too much to start with. But layering complicated themes like legend vs. reality, trust through family bonds, legacies, and Lazarus Pits on top of that return was probably never going to work, regardless of the talent involved.

And it’s only gotten worse in this omnibus. Because DC has chosen to focus on Dini alone, they’ve only included his issues, making the larger story more-or-less ruined. What is included might be worth looking over for Benjamin’s cleaned-up take on Jim Lee’s iconic style, but strictly speaking, I don’t think it’s worth reading. If you want something legible, go back to Maidens.

Bonuses: The Other 90% of the Omni

Dini really shines when he gets to work episodically. Seeing him do this through the first half of his run on Detective Comics, as well as in various specials and one-offs, is an absolute treat and an object lesson in craft.

Ronnie Del Carmen’s artwork is absolutely perfect for this Arkham-centric tale. Harley Quinn and Poison Ivy having a bit of fun at Joker’s expense, and while simple, it positively comes alive in Carmen’s beautifully cartooning and Dini’s wry humor.

Alex Ross provided the artwork for this Dini story of a Joker, Harley, and Batman set in the grime and glamour of old Hollywood. Ross captures that tone perfectly through his lighting, costuming, and dutch angles, but also uses the Crown Prince of Crime’s enormous presence to push things well beyond that. Still, Dini’s economy in storytelling, deft ear for genre, and excellent application of silver screen tragedy is what makes that Ross’ work possible.

Harley acts as a framing device in this comic, guiding readers from story to story. Dini makes her a mix somewhere between Carol Burnette and The Crypt Keeper, making her funny… but not so much she isn’t functional. Artist Elsa Charretier captures that festively unsettling combination with clean line work that complements Dini’s “living cartoon” take on the character.

The special’s not perfect, and it falls short on the inclusivity it promises. But seeing as Dini is only a minor contributor, and that the comic includes two incredible team-up stories—a very Frank Miller Batman/Detective chimp tale, and Constantine’s pagan holiday featuring a beleaguered Wonder Woman—it’s more than worth the read. 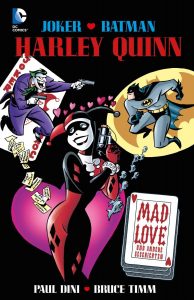 Special Topic: On Cruelty and Violence

If there’s one detraction against Paul Dini as a writer, it’s his use of violence—particularly cruel violence—as story elements central to his characters. On the face of it, that’s not particularly out of the ordinary for comic books or even media in general.

But, when gathered together, Dini’s application of suffering does give pause.

Famously, Dini created the character of Harley Quinn and introduced her as essentially a story-proxy for domestic violence. This was for a children’s cartoon as well as a young-reader comic book. He visited similar fates on [Ed: Name Redacted] in the film Batman Beyond: Return of the Joker

and to Catwoman in the comic story Heart of Hush (collected in this omni). 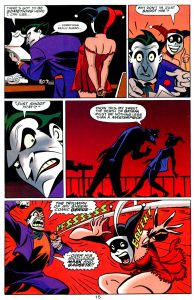 While I didn’t set out to solve this concern in this article. Batman is a media empire defined by violent childhood trauma and disfigured serial killers. Applying real-world violence to that kind of “entertaining violence,” would be difficult enough, and we’d have to get into general problems in storytelling and culture before we even got to that.

Instead, I mention this here because of how that violence sits within the reading. “Heart of Hush” features horrifying violence, but also some of the most romantic Batman stories to date. Just as Dini created Harley Quinn as a damaged woman in “Mad Love.” But in the Batman the New Adventures episode “Girls Night Out,” he remade her into the woman we know now: brave, in love with Poison Ivy, and straining to be free.

These things do not forgive one another or set balance to something. But omnibuses have a way of setting things side by side that makes them sit differently. This is not a children’s cartoon. But neither is it a nightmare. True to Paul Dini’s history, this collection of stories occupies its own corner of Gotham, a fact that has made it fuller and more tragic in parts. And it shares the same potential as Dini’s other works, but how close it gets depends on what it inspires in you.

As a big fan of both the character and the author, this omnibus was a concrete buy for me. Though ironically, I can’t exactly say this is Paul Dini’s best work—on the character or otherwise. 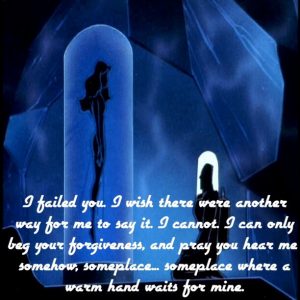 His work on Batman: The Animated Series, Mask of the Phantasm, Batman Beyond, Return of the Joker, and the first two Arkham video games are all head and shoulders above some of these comics. And DC’s choice to remove issues that were either important for reading (as is the case with The Ressurection of Ra’s al Ghul) or in terms of Dini’s contributions to the publisher (like Mad Love) seems… well, greedy. Rumor is that this book began life as a Hush omnibus and only later evolved into one that was centered around the author, but that’s hardly any excuse.

Still, some of the issues it does have—such as The Bet, Case Study, Slayride, and more—are so good that they can almost single-handedly overcome the shortfalls. Almost.

Eventually, it comes down to taste. If you’re not already familiar enough with the material to decide from the above, I’d recommend checking out a few of the earlier Detective Comics issues, or possibly Heart of Hush before making any costlier decisions.