You are here: Home / Featured / Are Black Widow’s 1990’s Graphic Novels Worth It?

When asked about great Black Widow stories, it’s easy for even a lot of her longtime fans to find themselves at a loss. Yes, there have been many great stories featuring Black Widow, but they tend to appear in fragments, across the greater Marvel Universe. Though Marvel has made it more of a point in recent years to write exciting new sagas for our beloved spy, it doesn’t change the fact that there were entire decades during which Natasha was more or less regulated to her position as a supporting character.

Still, even in relatively minor roles, Natasha is the kind of protagonist that makes a big splash. Her time as an elusive double agent is as much fun to read as her days with the Avengers, and she has remained fascinating over time precisely because of her mystery rather than in spite of it. We’re a lot happier now that there are whole series dedicated to the Widow’s lore, but we can’t deny that even on her worst day, she was always a heck of a lot of fun to read. Marvel is releasing a collection of some of her 1990s OGN team-ups and there’s no time like the present to revisit them. 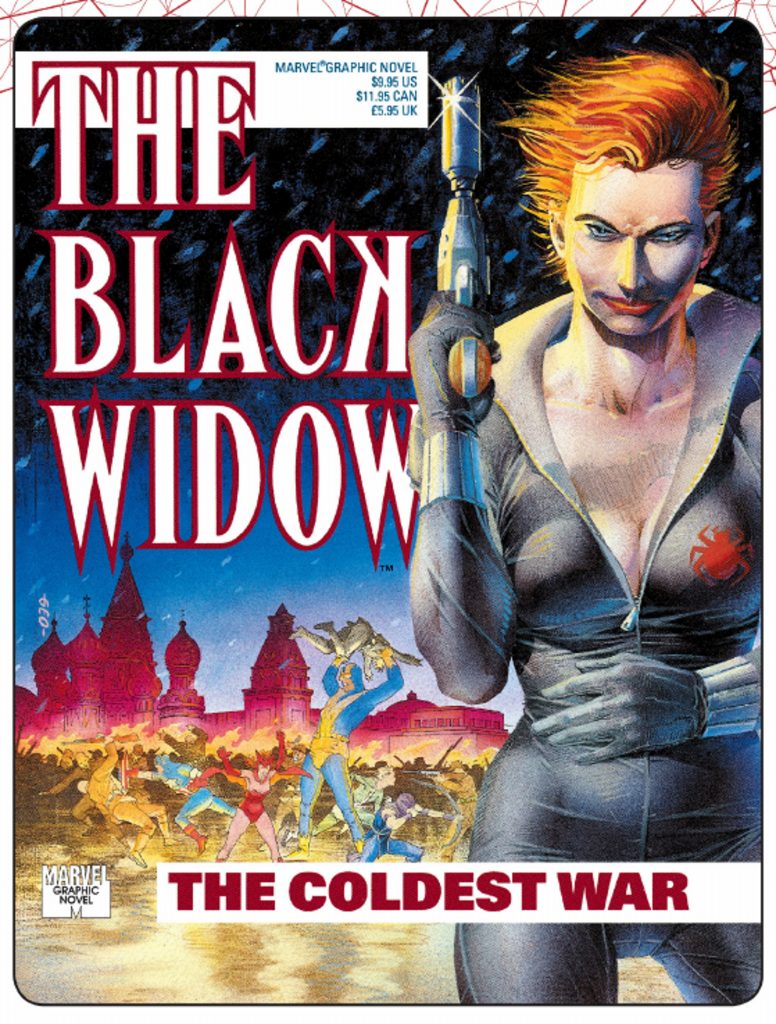 “The Coldest War” stands out among these four graphic novels because Natasha isn’t directly paired with anyone and the story is more about her alienation from the greater world of Marvel heroes than her place among them. Natasha thinks back on her past and her relationship with Red Star, who tragically died years before. She discovers that he may yet still live and this throws her life into a tailspin.

Rather than proving her strength, this story shows us the Widow’s vulnerabilities. She realizes how her lovers have moved on from their relationship with her, while she herself struggles and hangs onto a past she can’t overcome. Daredevil makes an appearance, but only an appearance, playing no great role in the overall story but to show her how far apart they’ve truly grown. This is a better story for its singular focus on Natasha and her feelings of stagnation, remorse, and sorrow. We see her reach a sense of catharsis around her early life, and by the end of the story, she feels like a more complete character than ever before. 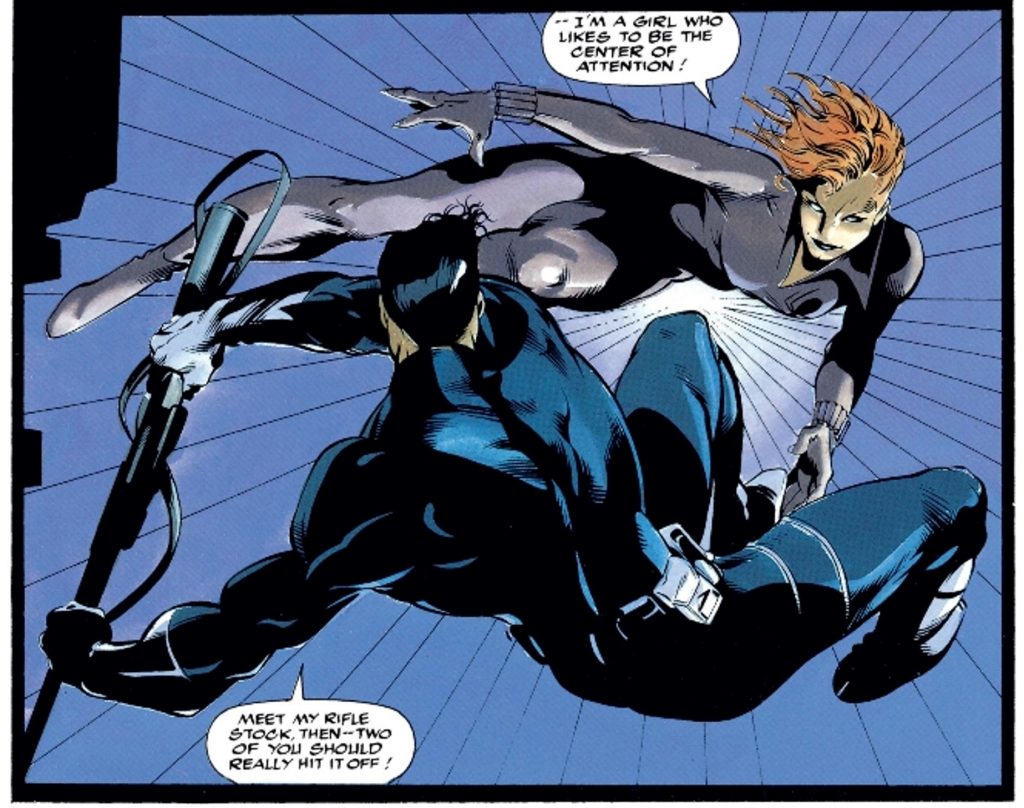 “Spinning Doomsday’s Web” is full of ups and downs. It opens on a wild prison break in which the murderer Doc Malum is broken out of his cell. The Widow is sent in by none other than Nick Fury to help end the resulting prison riot, but he tries to call her back when he realizes it’s become “a bloodbath.”

Widow refuses to be told what to do and tries to stop Malum from escaping. She then suffers an uncomfortably sexualized defeat at Malum’s hands. This leads her to believe she’s lost her edge and she teams up with none other than Frank Castle to stop Malum’s plans to bring Armageddon to earth. Castle and Romanov don’t have much in the way of chemistry but, as usual, the Widow’s interactions with Nick Fury are a highlight. 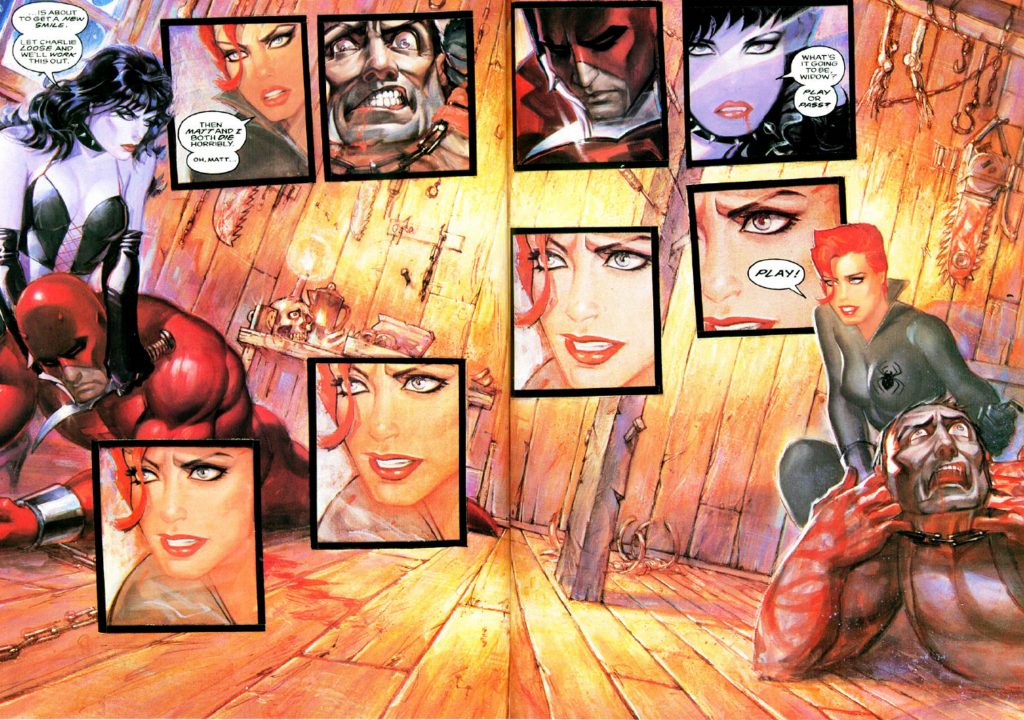 Though these OGNs are all a little on the bleak side, this is easily the most disturbing of the group, drawing from ’70s-’90s era crime and horror films at least as much as it does from superhero comics. “Abattoir” begins with the Widow tied up and tortured by a woman named Rose who endured a life of abuse to become a serial killer that specializes in murdering telepaths. In the past, we watch Daredevil and the Widow team up to solve the murders only to find themselves increasingly drawn into a twisted game of cat and mouse.

This doesn’t make for a hugely original story, but it does feature some fairly interesting scenes between Natasha and Matt, and it does show her confront a side of herself that she doesn’t necessarily like. The character work here is solid and the depth we get from Natasha as a person makes it well worth the read.

Billed incorrectly as a Nick Fury/Black Widow team-up ostensibly to help sales, “Death Duty” is very light on the Fury appearances and actually shows an unexpected continuation of a somewhat obscure Marvel UK character known as Night Raven. Though we do see some presence of Black Widow, it’s mostly a Night Raven story as he attempts to end the reign of terror began decades back by the woman who made him immortal against his will.

Yi Yang has continued her ghastly, forced experimentations, creating a new breed of leopard/human hybrids that Widow and Raven find common ground with. Rather than introduce Night Raven to the greater Marvel Universe, this issue ends with his cathartic death as he stops Yi Yang. Natasha doesn’t get a ton of character development, but her capacity for switching sides and keeping an open mind makes her the right choice for protagonist. Again, we see the alienation she feels towards her former homeland as she notes, “the new Russia’s not what I expected.”

It’s true that these team-ups saddled her somewhat needlessly with male heroes. At any rate, these stories all share one thing in common, which is that they’d be stronger if they lost the male hero and focused on the Widow. Their presence tends to muddy the stories up and they don’t contribute much to the plot. The comics would be more cohesive without them.

In the years since these releases, Natasha has advanced significantly both as a guest star and as a solo hero. Her guest appearances today generally don’t trouble themselves with the work of continual deep dives into her distant history like these stories did, rather focusing on her personality and her character development in the moment. More importantly, she’s now become one of Marvel’s pivotal characters, leading her own film and sustaining several ongoing monthly series and mini-series. Looking back at these early outings, it’s easy to feel like the only thing holding her back was editorial choices to begin with. Once she broke out of the expectations of the industry, she was able to fully become the character she was always meant to be. These OGNs are interesting and well-told, but they were only the beginning for a character who has, all these many years later, finally bloomed.