You are here: Home / Comics Guides / Best of Lists / Ahead of Their Time: 10 Revolutionary Comics That Inspired the Medium!

Human beings tend to notice things late. Comic book superheroes were a thing for two full years before Action Comics #1 got people’s attention. There were heroes wearing Bat, Spider, and Strong Man outfits long before Bruce, Peter, and Clark. And it’s not just comics; Fleet Walker was the first to break baseball’s color barrier; fish and chips are Portuguese; even the pyramids are Brazilian.

The cause of this is partly because of marketing (honestly, the branding campaign around the pyramids has been stellar). But partly it’s because human beings are spectacular at noticing trends, not origins. So today, we’re going to give you a look at 10 of the comic books that came before the beginning and set the ball rolling. 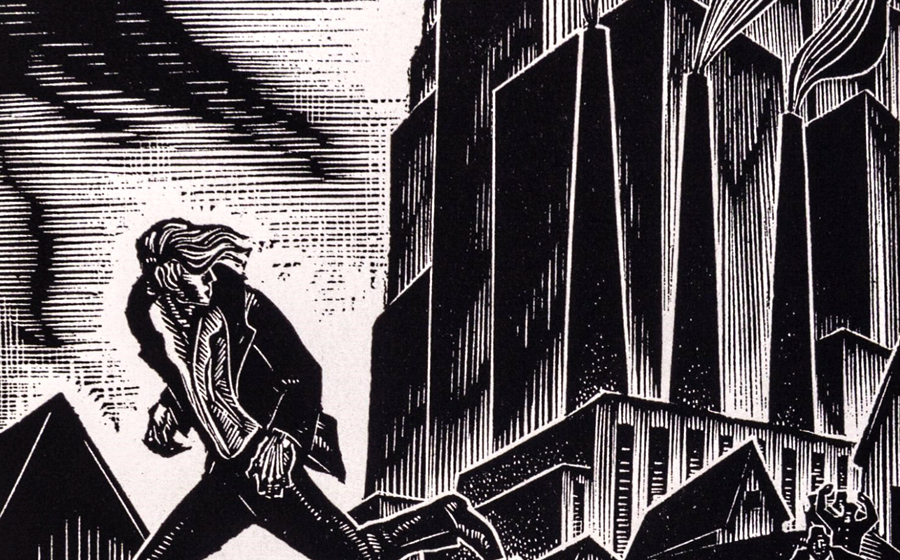 Trying to figure out what the first comic book was is just a race to see who can say “cave paintings” first. As a general question, it doesn’t help us out a lot. But if we define comics a little, say as bound, mass-produced books filled with page after page of art that builds to a story? Well, then we have something to work with.

By those criteria, the first comic might have been Gods’ Man created by Lynd Ward.

Ward, a Chicago-based artist, created this book using woodblock printing techniques that dated back to 220 CE. Created in 1929, God’s Man is certainly the first graphic novel created by an American, and maybe even the first in the world. It’s also startlingly gorgeous, feeling like a cross between The Cabinet of Dr. Caligari and a KMFDM album cover. 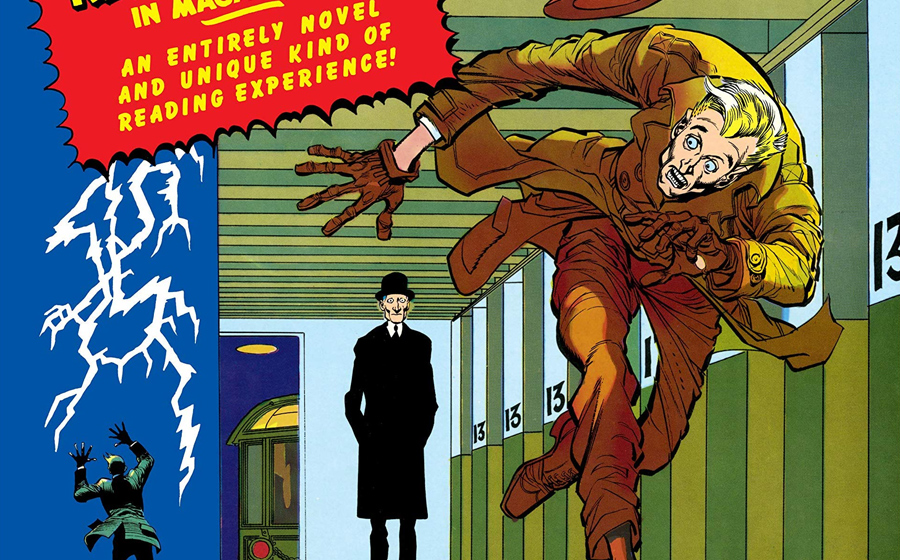 Krigstein may be an obscure name now, but when EC published his story Master Race in 1955, he became the final name in cartooning. Krigstein’s story about a concentration camp guard trying to escape his past is cited as a foundational moment in comics by luminaries like Art Spiegelman, Jim Steranko, Frank Miller, Bill Sienkewicz, and more.

Krigstein’s brilliant use of repeated imagery made for a foreboding, shuddering pacing, giving the story real dread. Reading this book feels running for your life, finding somewhere to hide, and holding your breath until the danger passes.

It is an incredible achievement. 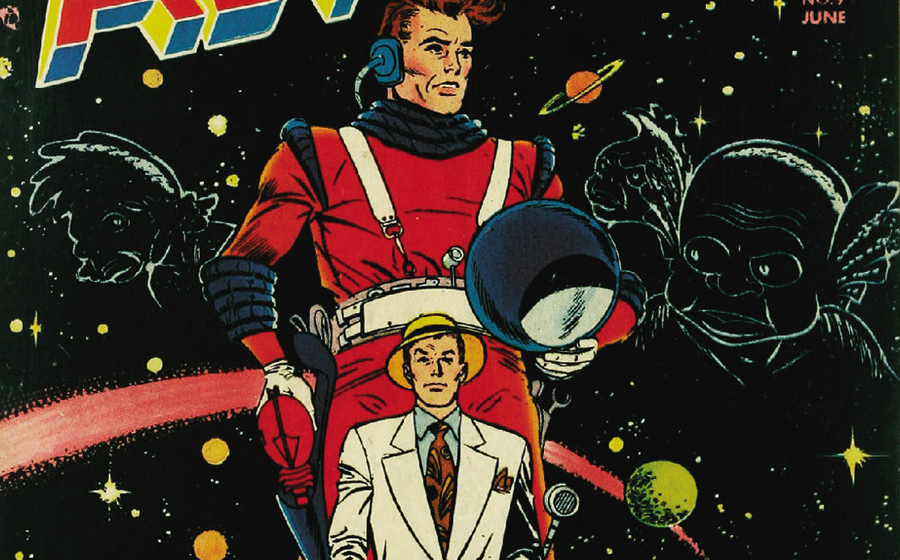 The Origin Of Captain Comet

The official history says that the Silver Age began in 1956 with DC Comics’ Showcase #4. This introduced Barry Allen as the new Flash, ushering in the idea that superhero comics could radically change.

But what if I told you that Barry Allen was not the first Silver Age hero?

That distinction belongs officially to Adam Blake, “Captain Comet,” who got his start in Strange Adventures #9 a full year before Barry stepped on the scene. Blake was the original test case for taking the established superhero template and applying heavy doses of Buck Rogers. Like Superman, Blake was the son of a midwestern family who grew up to exhibit extraordinary powers. The difference, however, Blake’s origins, powers, and adventures were keyed into science fact and fiction.

The second he becomes Captain Comet, Blake is immediately drawn into cosmic adventures. Unlike Superman or Flash, who focus most of their time on Earth, Captain Comet set out to fight rockets and aliens as soon as he could. Way before the Silver Age pushed every hero to follow suit.

All the potential is why Blake keeps popping up, from Kingdom Come

to 52. And frankly, I hope we see more of him. We need more heroes who punch space dinosaurs. 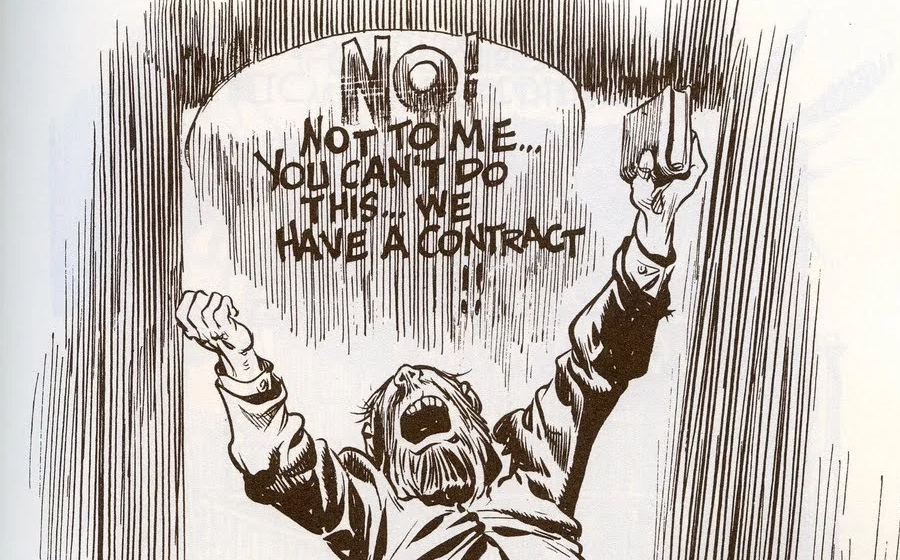 A Contract with God and Other Tenement Stories

While The Spirit might have created much of the visual language we associate with comics today, it’s A Contract with God that belongs on this list.

It’s a story of a man who’s lost his child. It’s a tale filled with real world rage and grief like nothing else being published at the time. Nor were its fiery sentiments about the failures of man and religion. Eisner was already a fairly mainstream name at this point, so this comic was elevated out of “indie obscurity” and into the public consciousness. And it’s seriousness was evident by the “graphic novel” label on the cover (the first to print it so boldly.)

Eisner’s artwork is similarly elevated in this book. His cartooning and draftsmanship was already impressive in Spirit, but here it’s grown even more confident. Each panel seems so carefully considered yet effortlessly drawn. It’s truly the high water mark in brush and quillwork. 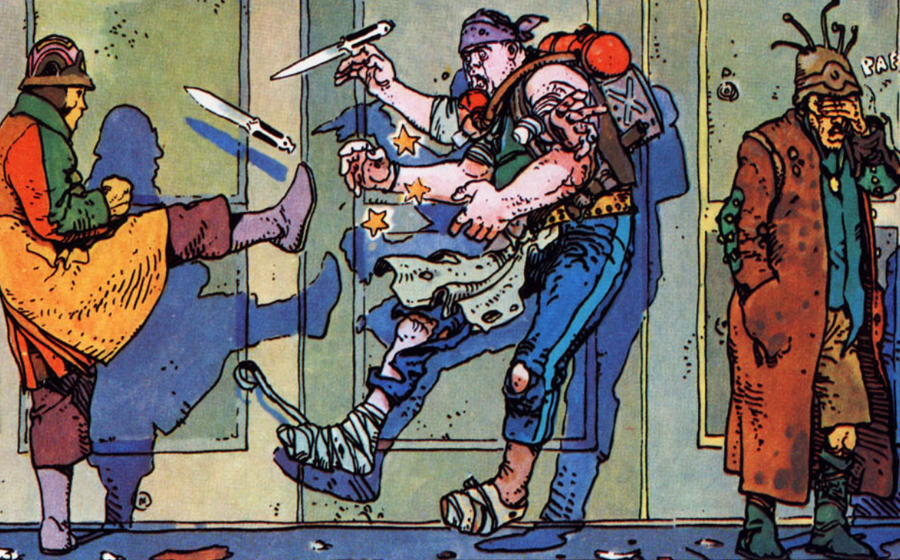 The Long Tomorrow is a short story featured in Metal Hurlant magazine. It’s a sci-fi detective story, featuring a hero navigating through a future of crowded streets, neon desperation, and dark alleyways.

Told in just two parts, the story single-handedly revolutionized science fiction. Its mix of classic noir and futuristic urban sprawl felt fresh and alive. And if it didn’t invent the Cyberpunk genre, it certainly formalized it.

O’Bannon and Moebius went on to become the creative forces behind films like Alien, Tron, and The Fifth Element. The Long Tomorrow went on to fuel comics like Akira, Shaolin Cowboy, and Transmetropolitan; William Gibson’s Sprawl trilogy and Neal Stephenson’s Snow Crash; movies like Blade Runner, Escape From New York, Star Wars, and the Matrix; music from bands like Throbbing Gristle, Ministry, RevCo, and Prodigy; and countless other books, comics, films, and games

Sadly, this along with much of Moebius’ other work is currently out of print. 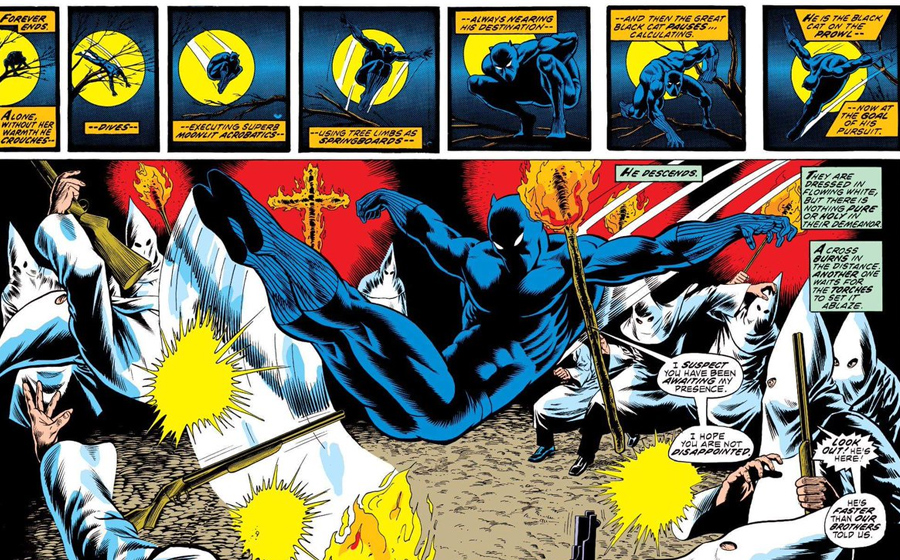 Marvel’s Jungle Action was a mess. The magazine focused almost exclusively on Tarzan knock-offs running around in reprinted adventures. By 1970s standards, it was something of an embarrassment (both politically and creatively.)

Finally, proofreader Don McGregor snapped and hatched a plan. A plan to not only fix the book but to use it as a vehicle to make the first truly great Black Panther story. The resulting 13-part story ran from 1973 to ‘75 and became a hit, introducing characters like sympathetic villain Killmonger along with much of the Wakandan court. The whole run sees T’Challa exploring his kingdom, getting out of wild death traps, and — most importantly — delving into the struggles of black power structures at the time. It’s filled with great storytelling, phenomenal artwork leaping across double-page spreads, and so much obvious passion.

But there’s one more fascinating invention: virtually as soon as Panther’s Rage ended, all 13 installments were yanked out of Jungle Action and collected into their own, single book. Meaning it beat The Dark Knight Returns to press by nearly 10 years, making it one of the first official graphic novels ever printed. 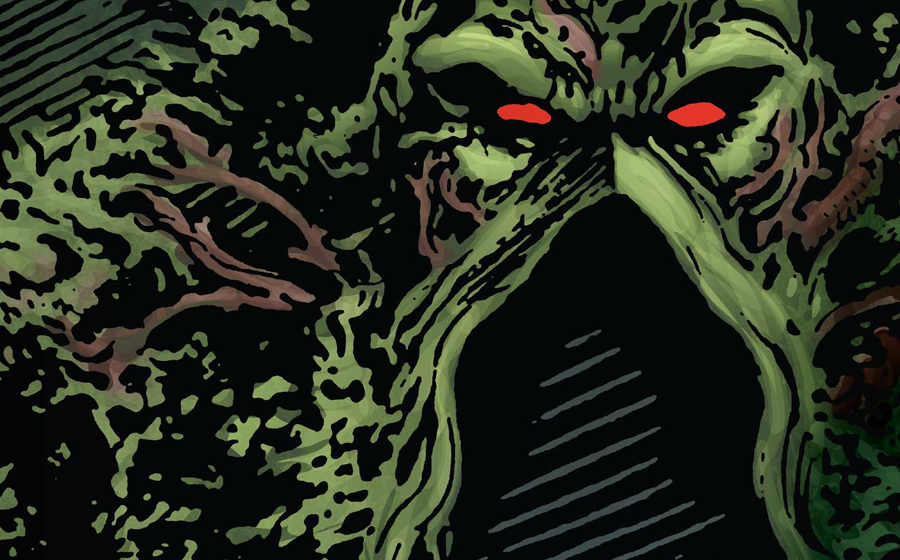 Saga of the Swamp Thing

It seems like such a simple inversion now: Alec Holland did not become a plant creature, but instead, plants became Alec Holland. But this little change not only saved a dying series, it also revolutionized comics as a medium.

Free of his mortal restrictions, Swamp Thing was free to become a living god. He became the embodiment of the Earth itself, powerful enough to take on the entire Justice League and yet sensitive to the smallest oil spill. The title itself became more powerful, free now to talk about political causes, gender relations, and the very nature of the self.

This book is so influential that it became the template that editor Karen Berger used to develop Vertigo comics. Without Swamp Thing, there would be no Hellblazer. Without Constantine, no Sandman, no modern comics. 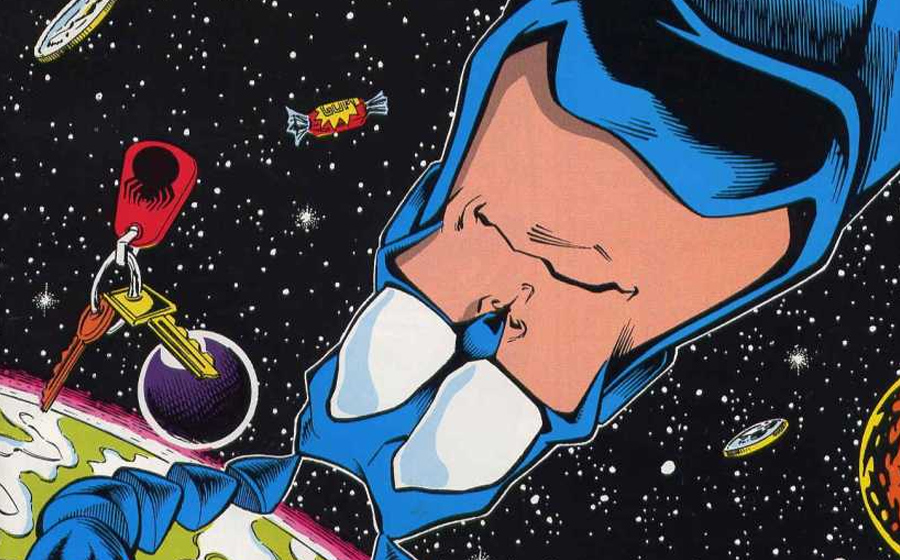 Once upon a time, superheroes were a much smaller part of our culture. There weren’t blockbuster films to educate people. If you wanted something besides Superman or Spider-Man, you had to find cramped, dark comic stores that smelled like old paper, vanilla, tobacco, and mold. There were absolutely no websites or social media to connect fans together.

In other words: comics felt isolated. And frankly, a lot of us had a poor understanding of how things worked.

Enter Ben Edlund. 18-year old Edlund produced a tiny, ‘zine-style comic. We’re talking small enough it was only carried locally by a chain of stores in Boston. But small as it was, this comic had an enormous idea: what if the medium of comics was funny?

Not just pie fights and slapstick, what if the comic book was self-aware of every worn-out trope, every subliminal trend, every absolute truth of comics? And what if it had a big, good-natured oaf that barreled through what we fans considered sacrosanct? What if the book could speak to comic fans in their own language, a secret code that was still secret back then?

The result was a comic that could mock Clark Kent’s glasses and Frank Miller’s ninjas, then go on to quote Walden, and conveyed by Edlund’s solid, genre-skewering cartooning. This book didn’t just set the stage for books like Deadpool and Squirrel Girl, it might have actually done the same jokes better. 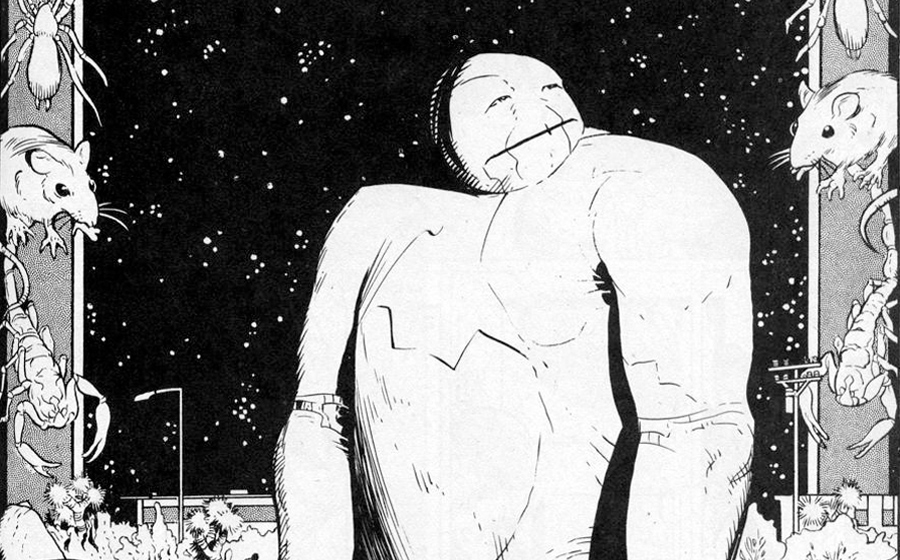 The 1980s were seemingly filled with artists, writers, and publishers going out of their way to try to make “adult comics.” On one end was Alan Moore, who filled too few books with enormous ideas, some of them about plant sex. On the other end, Frank Miller was busy turning everyone into grim, dark ninjas who brutalized people. It began to feel like you were either trying to be one (or both) of those men or else you were making Donald Duck comics.

Paul Chadwick wasn’t doing any of that. His story of a political speechwriter who got turned into a concrete golem by aliens sounds like a traditional comic book premise, but the approach is different. Concrete spends most issues just trying to figure out how to be a person. It’s a book filled with anxiety and loneliness and love, making it a “compassion over conflict” book long before Vertigo “pioneered” that approach.

Concrete teaches that sometimes, comic creators — even great ones! — are creating things about detachment. And maybe comics — even goofy ones! — can be about connection instead. 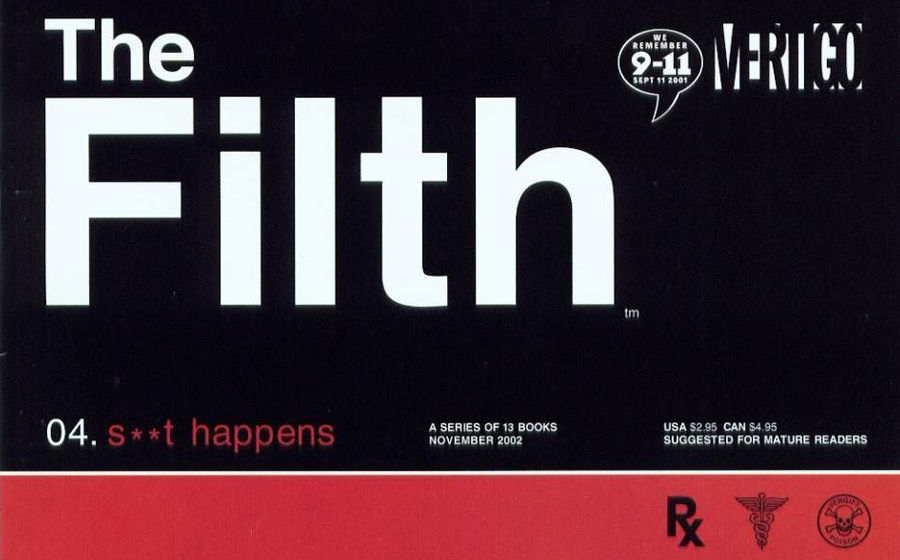 Grant Morrison is a man who arrives early to everything. This means we could justify putting literally any of his books here on this list. But I think this one rises above all the others.

That’s who’s going to fight the secret world order. But stranger still is how Morrison got an ad agency to help the book out.

Carlos Segura’s Segura, Inc. (a design firm out of Chicago) did the striking covers for each issue. The graphic executions were both distinctive for the time and set an important, “evil corporate” tone for the entire series, making this series the first comic run to have a comprehensive brand identity and standard.