, a fun story about a pair of down on their luck bounty hunters in space. Shortly after finishing the first volume I made myself a list of some of her books that interested me and Vagrant Queen was definitely on that list. Fast forward to now and we’re on the eve of Vagrant Queen making the jump from Vault Comics to the small screen in a SyFy channel TV show on March 27th, so what better time to take a look at the first volume of the comic and get a look at its inspiration?

, as the title implies is the story of exiled queen Elida. We meet Elida slumming around the galaxy acting as a bounty hunter to make ends meet and otherwise just trying to stay below the radar. This is upended when an old “friend” Isaac drags her back into the royal drama by telling her the mother she thought lost was in fact still alive and waiting to be saved. This kicks Elida back into the thick of it, putting her at odds with aristocrat turned revolutionary Lazaro who wants her dead and possibly much more. 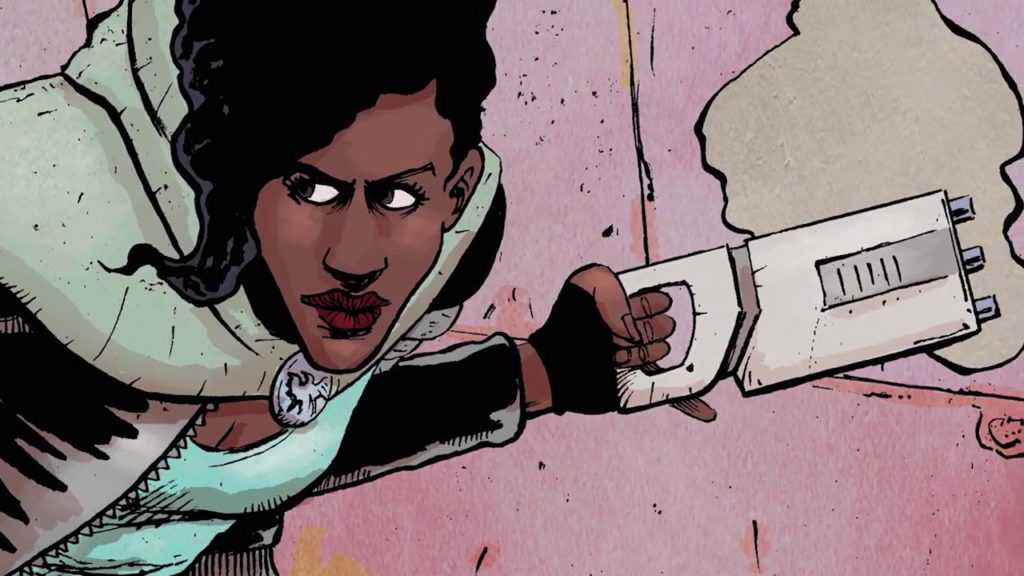 One question I had for the story going in was how this plot would be structured. The trade is listed as “Vagrant Queen: Volume 1” on Vault’s website and online stores, implying this is just the start of a longer story. Yet “volume 2” is not out to continue the story. This left me pondering whether this would be the first part of a long ongoing story with no real defined “end” or the first complete story arc that sets up the characters, world and premise that can be expanded for future stories. I was quite happy to find it the latter. This volume tells one complete story with a complete arc, ending with definite hints at more to come, but is a satisfying read in its own right.

The story mostly stands on its characters. You need to like Elida from the get-go for the story to work and she’s written in such a way that you do. She feels sufficiently done with everything before slowly getting dragged back into this conflict she’s escaped, and the book slowly opens her up more from a disinterested bounty hunter into an actual hero. This is good because this type of story lives or dies on its main character and if she hadn’t been handled right, the story would have been a disaster. The rest of the supporting cast are fine and do their jobs mostly well even if certain character turns go in fairly obvious directions. I knew exactly how Isaac’s character was going to play out the whole time for example. He’s still well written and fun however, his interactions with Elida, their banter and chemistry being a large part of what makes the story work. The main villain Lazaro is simultaneously both interesting and frustrating in that it feels like there’s more to his story we’ll never learn, but as an antagonist he does his job quite well.

World and lore-wise things are a bit on the scant side. It oozes sci-fi of course but it definitely carries the influences it pulls from on its sleeve. There’s a LOT of Star Wars and Cowboy Bebop influence it’s hard to ignore. Elida is set on her mission thanks to a conversation in a skeevy space bar with exotic aliens all around leading to a need to escape from a cadre of fascist stormtroopers in a ship the characters argue about the ownership of that’s simultaneously described as a superb classic and a hunk of junk. Maybe it’s the Star Wars fan in me but this all felt quite familiar to me. I do find myself wishing I had learned more about the varied and different elements of this universe. After the first issue that takes place in the aforementioned bar, the more alien characters just stop appearing entirely with every single character from there on being regular human beings with some occasionally having unnatural colors. Like I said before, luckily the chemistry between our two leads and their personalities grounds the story and makes it work because the book doesn’t really go for building an interesting sci-fi universe to explore. Hopefully we get some more varied alien designs if and when the series continues. 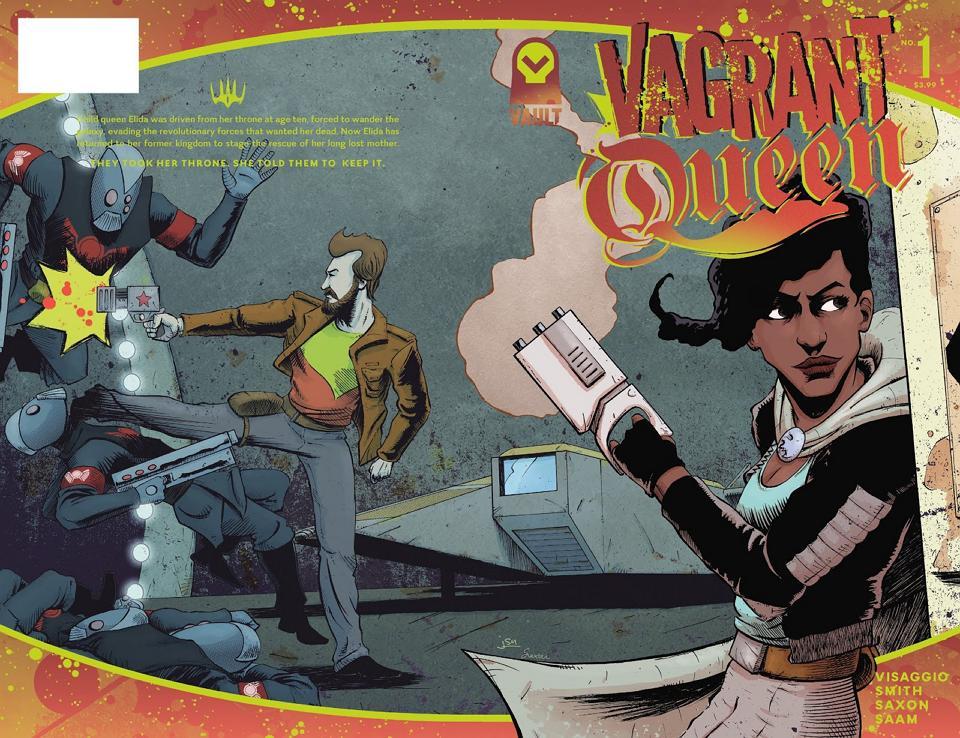 Onto the art side of things, we have Jason Smith credited only as an “Inker” on the line art of the book with colors by Harry Saxon and they do a stylized but good job of it. The characters are interesting to look at and quite expressive. The book has a less polished feel which I honestly think was intentional. The characters have an “off model” design where the faces aren’t always the same shape, but it always does fit the emotion and intent of the scene. This all contributes to the characters being expressive and interesting. Mechanical design was serviceable if not spectacular. The ship design and the like didn’t stand out to me too much, but I did like the design of the Revolutionaries/Empire stormtrooper masks and did get a little giggle when I saw that the guns included what were clearly Super Nintendo buttons on them.

The book goes for a grunge lived-in aesthetic for this universe which is a good direction to aim for in a book like this, but the effect is a bit lopsided in the first issue. One of the methods they try is a splattered ink effect where little dots and splotches of ink are all over the background elements and the effect leaves something to be desired. Some panels it has the desired effect and looks quite good as a result, but in some others, it goes way overboard and overwhelms the frame in a distracting way. I think the creative team may have agreed with my assessment themselves because the effect is gone in the second issue and never returns. From then on, the same goal is achieved by going with more color variation and texture baked into the colors themselves including elements like intentional watercolor stains that honestly achieve the effect much better without ever becoming distracting.

Overall, Vagrant Queen is a solid indie title if a bit of a lopsided one in my opinion. The things it does well it excels at, while it definitely has some room where things could be expanded in other areas. I actually find myself excited for the TV show. After finishing the book, I checked out the trailers and the show appears to include the best elements of the book, namely our two protagonists and their dynamic and chemistry, but are expanding the universe and the lore. The varied alien and location designs in the trailer are exactly what I felt the book was missing so I’m pretty eager to check out the show myself now. As for the comic that spawned it, it’s a flawed experience for sure but still has a lot to enjoy in it and with only about 150 pages it’s a fairly quick read at that. I would definitely recommend the book.