The world has fallen to a “techno-pocalypse” dystopia where people spend their lives addicted to techno-organic internet feeds with nano-bot delivery systems that can inject you with pretty much anything you could want. The nation of Los Angeles is home to the virtually enslaved, the criminal poor, cannibals, and the gangster corporate ruling class that oversees it all. Police have been disbanded in favor of the private sector and the corporate enforcers of choice are the Constables.

Our tale follows The Isles of Los Angeles’ only tech-free Constable, Debbie Decay, and her tech-dependent boyfriend Led Dent. Debbie’s lifelong dream is a world without the smog, tech, and squalor of her home. Fortunately for her, their employer has a mission for them that will take her to paradise: The Garden Nation of Tokyo. But, life is never that easy. 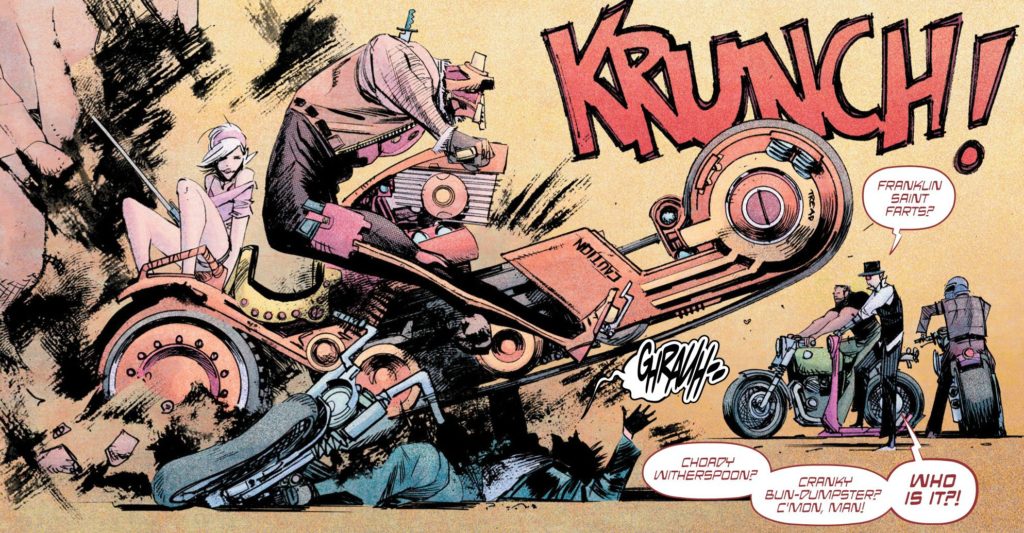 doesn’t shy away from anything! This trade is chock full of gore, sex, drugs, intense language; anything and everything that could be offensive is here. But, it’s done in such a way as to seep into the background, letting the plot become the real center of attention. It’s never gory for the sake of being gory or nude for the sake of being nude. It’s all treated as just a part of life with an “It’s there. So what?” kind of attitude that is just refreshing compared to the shock value, sales driven comics of the mainstream.

The art is incredibly detailed. Every line, every shadow has purpose. Anything less and this comic would be a crude waste of time. Thankfully, Sean Gordon Murphy and Matt Hollingsworth give Rick Remender’s work an atmosphere and tone that is just perfect. It’s dark and gritty in all the right ways, the art team just bring this story to life in an incredible way.

The story here is authentic and real and terribly thought-provoking. Its subtext examines humanity’s growing dependence on technology, weaving it into an action-packed adventure that shines a particularly bright light on the complexities of human need. Debbie lives in a world where technology is power, and power is all that matters. Yet, she can’t quench the burning desire for something more, something greater than she’s ever known. Led on the other hand highlights the dark side of human desire. Benign in his origins, he succumbs to addiction. He shows us how far we can lose ourselves and just how easy it is.

The font can at times be difficult to read, particularly for characters that have further stylized dialogue. Despite the action and pacing, I found myself distracted and a little bored at points in the first few issues. It didn’t really pull me in until issue three where I became hooked.

I guess that makes Tokyo Ghost a metaphor in itself for addiction. We get a taste, little by little, until we can’t put the book down and start jonesing for more!