Thor wastes absolutely no time in teaching you how to watch.

Whereas most action movies would spend a full two hours building to a confrontation between the God of Thunder and Surtur (aka Asgard’s DOOM!), Ragnarok barely wastes five minutes. Even then, Surtur’s realm-conquering monologing is record-scratched over and over by some semi-predictable gags.

At the end of the day, that’s the magic of Thor: Ragnarok. Even in a land replete with gods, absolutely nothing is sacred. 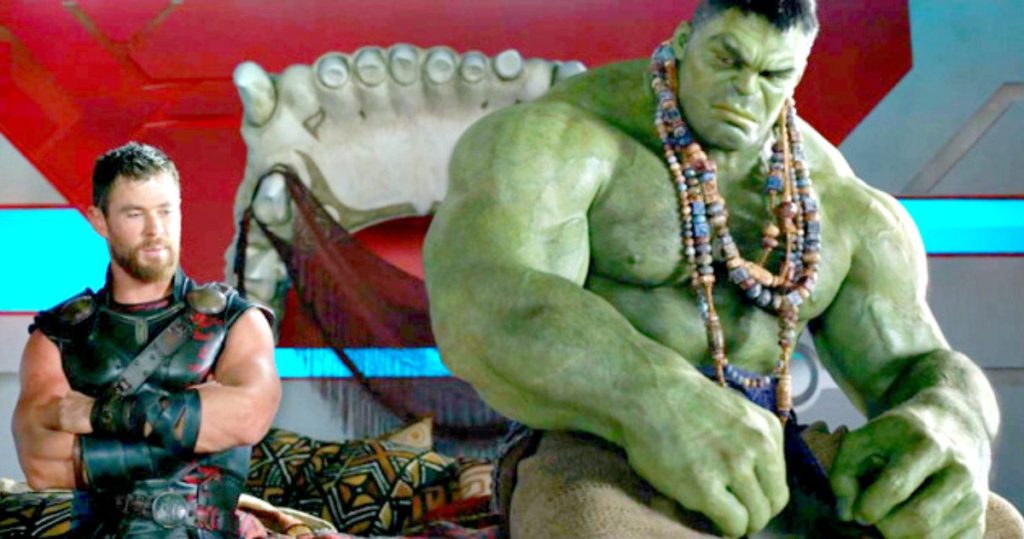 Perhaps most amazingly, Ragnarok defies conventions at every turn. From Thor frantically repeating Black Widow’s Hulk tonic, to Bruce Banner flexing his heroic bonafides by jumping out of a plane onto the Bifrost bridge, no moment is safe from the comedic potential of flipping the script.

My personal favorite example stems from Thor – now three movies deep in what has to date been the least beloved Marvel franchise – cracking the code of Loki’s schemes over and over. As much as I love to see the god of mischief surprising everyone with yet another trick, Thor has seen it too many times to be fooled again. It’s extremely rewarding to see Thor turn the tables on Loki for once, and not merely fall for another of Loki’s holograms like the big dumb bag of muscles he’s been in the past.

Admittedly, too much talk of Ragnarok’s humor feels a bit like a crutch – After all, what were you expecting from one of the best comedic filmmakers working? When Jeff Goldblum’s Cosmic-Tokyo Grandmaster and Korg’s polite New Zealand warrior show up, the humor warps into overdrive, and Ragnarok cements its standing as the funniest superhero movie ever made (come at me, Deadpool).

The real achievement, though, is all this humor blended with childlike wonder. What the world needs now is fun, sweet fun, and you won’t find a movie more capable of delivering pure unadulterated comic book joy. 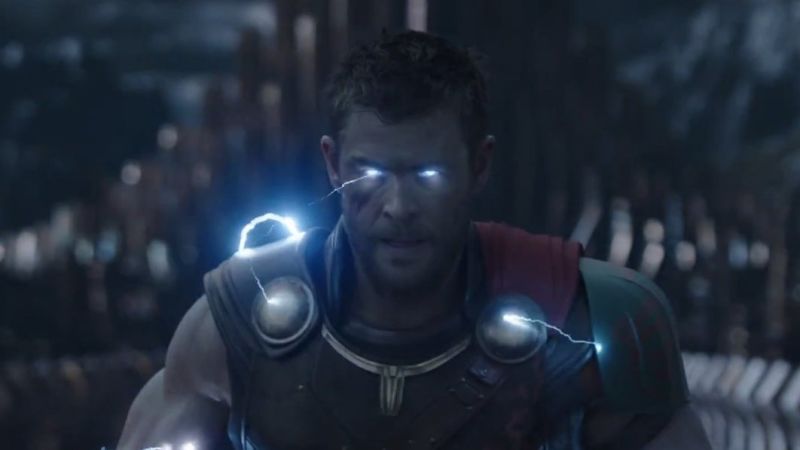 THE BIG PICTURE OF THE MARVEL CINEMATIC UNIVERSE

It’s easy to get lost in the belly laughs, but there’s a fascinating bigger picture development in Thor: Ragnarok than Korg stomping bugs on rainbow bridges.

Sure, Ragnarok signals an end by its very namesake, but in committing to the destruction of Asgard and the forward march to Infinity War, Ragnarok hints just how close we are to an end for the Marvel Cinematic Universe as we know it.

Marvel Studios is rolling into uncharted territory with nearly 10 years and now 17 films of blockbuster domination (not even including their more muddled forays into TV). Despite that unprecedented coordination, I have to admit there’s a part of me that expected the Mouse of Ideas to cling to their structure. Yes, I imagine Infinity War will be the big enormous game-changer that was promised, but Marvel won’t actually refresh the Avengers, will they?

The destruction of Asgard, and the promotion of Thor to King with Odinforce-lite powers. suggests Marvel’s much closer to true forward progression than I could have guessed.

I talked a bit in my X-Men: Apocalypse review (I’m trying to forget too, just bear with me) about the X-Men movie franchise’s unique need to deal with the passage of time. The longevity of ongoing comics is not typically a problem movie franchises have had to manage, but as superhero cinema reflects more and more of comics (and vice versa) these questions become extremely pertinent:

Do we reboot the whole thing when we’ve reached an end?

Do we run with this for as long as these actors will hold the roles?

Do we mix a blend of refreshed timelines and old favorites in a timey-wimey narrative that won’t make a lick of sense if you think about it too hard?

Ok, that last one’s specific to X-Men, but the point holds.

For my money, I’m most excited to see the MCU approach any direction other than a reboot. Bring this decade long Avengers arc to an unforgettable conclusion, and then move on a new path with All-New Avengers. Marvel Comics own experiments with Legacy have seen mixed results lately, but that doesn’t mean there aren’t plenty of good ideas to be mined for the future of the MCU.

For Ragnarok, credit where its due, this movie does not reset the table after its done turning things upside down. Asgard has truly moved on, and Thor is no longer the carefree prince we knew in 2011. 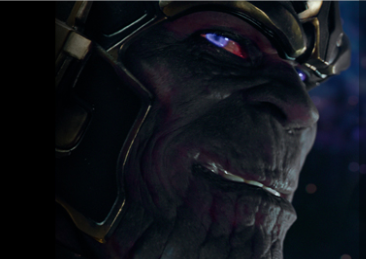 Congrats to Marvel’s Inhumans for not only rubbing dirt on Marvel’s good name, but having their “take our civilization to the stars!” plot completely stolen by Thordinson and the residents of Ass-berg.

For those curious, the Inhumans take on a wonderfully cosmic role in the Marvel Universe following the events of Secret Invasion and leading into War of Kings. Recommended reading all around.

Given the pre-movie assumption that the only people who could find flaws with Thor Ragnarok were the lumps who took comics wayyyyy too seriously, I was surprised to find I *kinda* see where they’re coming from. 90% of me is perfectly capable of enjoying the hilarious inversion of dramatic stereotypes, and of appreciating that Thor: Ragnarok is a better superhero satire than Deadpool.

Nonetheless, there’s still that 10% of me that sees a mockery made of Surter, fire lord of Muspelheim, and cries DOOM! on those who would perpetrate such crimes!

Loki’s also nothing but a punching bag – sometimes literally – for the duration of Ragnarok, which is a far cry from the rush I got seeing him scheme his way to the throne in the Thor: The Dark World post-credits.

Meanwhile, everybody waiting for Planet Hulk on the big screen, well, that wasn’t quite it, huh? The people’s champion and his would-be Warbound are comedic props (and outstanding ones at that), while Ragnarok is inspired by Planet Hulk the same way Spaceballs is inspired by Star Wars.

All of this would be significantly more disappointing if Ragnarok wasn’t the most fun anybody can have with Norse mythology this side of Walt Simonson’s Ragnarok.

At the end of the day, if you feel like Taika Waititi and company made a joke of Thor, I see where you’re coming from. Fortunately, it’s a very, very good joke.

Anybody else waiting for Sir Anthony Odin to tell Thor he’s a robot during their last scene together in Ragnarok?

For the record, I’d pony up the cash for Westworld-Asgard.

For those new to the ceremony, Comic Book Herald’s “There Is No Mandarin Award” is handed out to the Marvel Cinematic Universe villain most thoroughly wasted in service of the plot. The proceedings are named for Iron Man 3’s ruse, using the “Mandarin” as a mere gag (and a brilliant one at that).

Most of 2017 has been a challenge, with Iron Fist’s The Bride of Nine Spiders holding the title from March through August.

Defenders did step up recently to steal the award, with the apparent (I’d be real shocked if its permanent but maybe?) death of Elektra.

Fortunately, Thor Ragnarok came to play for the award this year. The question is not if there are any villains worthy, but which villains to choose! You have the apparent deaths of Skurge the Executioner and Hela.

(Not to mention the absolutely savage dismissal of the criminally wasted Warriors Three. I may need to launch a “Warriors Three Memorial Award” for heroes most thoroughly wasted in service of the plot next year.)

You could make a case that Skurge and Hela deserved longer runs in the MCU, although given Skurge’s redemption and Hela’s “I didn’t see a body”-ness, I wouldn’t call either wasted.

5 — He Stood Alone At Gjallerbru

It’s beyond incredible to me that Ragnarok found time to bring Karl Urban’s Skurge the Executioner full circle from arrogant traitor to the god who stood alone in Thor #362. While his redemption wasn’t as epic as that moment at the literal gates of hell from Walt Simonson’s Thor run, the fact that Ragnarok even came close is a testament to its pacing and structure.

If you placed your bets on Thor Ragnarok surpassing Deadpool as the best superhero satire in Marvel-land, come on down to the front to collect your no-prize!

I’m *still* astounded at how devilishly eager Taiki Waititi and company were to undercut all Hollywood cheese with a joke/brutal beating/brutal beating joke.

Given the phone booth outfit change disaster from Deadpool 2‘s first trailer, I don’t doubt for a second the Merc with the Mouth is up for the challenge.

In May, I called Guardians of the Galaxy Vol. 2 the funniest Marvel movie – by a landslide – and here Thor: Ragnarok comes to quickly upend that assertion.

Not only that, Ragnarok throws the 2017 comic book movie rankings into chaos, with an impossibly strong overall year.

We still have Justice League to come, and sure that could throw a parademon into things, but for the time being 2017 is easily the best year for comic book movies since 2010. Here’s my placement of the excellence:

8 — The Greatest MCU Streak of Them All

You could make an argument – as I’m about to – that Marvel Studios has been pitching a no-hitter (not quite a perfect game) since the start of 2016, or depending on your feelings towards Ant-Man, since late 2015.

With Ant-Man, Doctor Strange, and Guardians Vol. 2 in the mix, it’s definitely not a perfect game, but those movies still aren’t considered mistakes in my book. Here’s how I see it:

Guardians of the Galaxy Vol. 2 (Liner into right, fielder makes a diving grab)

Am I the only one who was generally confused by the mid-credits menacing shadow of what I assume was meant to be the conquering vessel of Thanos?

It’s all conjecture from this point forward, but my hopes for the Avengers: Infinity War saga are that Marvel unloads all the available villains (and if the words “Battleworld” enter the equation, well, I won’t complain).

Here are the major players on the board that I can think of:

What do you think? Did Ragnarok work for you? Do what feels right to you in the comments.