You are here: Home / The Walking Dead Reading Order

I couldn’t have predicted The Walking Dead would become the most popular television series in the world, but the first time I picked up a Walking Dead comic, I knew I was reading something special.

The first 48 issues of the Walking Dead comic are near perfect apocalyptic storytelling, taking the zombie genre and injecting it with the human heart, greed, and animalistic urges at the center of us all. Creators Robert Kirkman and Tony Moore (and shortly thereafter, Charlie Adlard) created a zombie infested universe that I couldn’t forget, and here we are years later, and it’s the most successful Comic Book TV adaptation ever.

There’s a reason it’s one of my favorite 40 comics of all time.

Fortunately, figuring out where to start with Walking Dead comics is nowhere near as difficult as superhero universes like Marvel or DC Comics. While writer Robert Kirkman’s other all-time great comic book, Invincible

, has featured a series of spin-offs, Walking Dead has remained largely insular.

There are a handful of exceptions, but for the most part, reading the Walking Dead comes down to personal preference and the type of reading experience you’d like to have. Below you’ll find all your options, and the appropriate order for each. 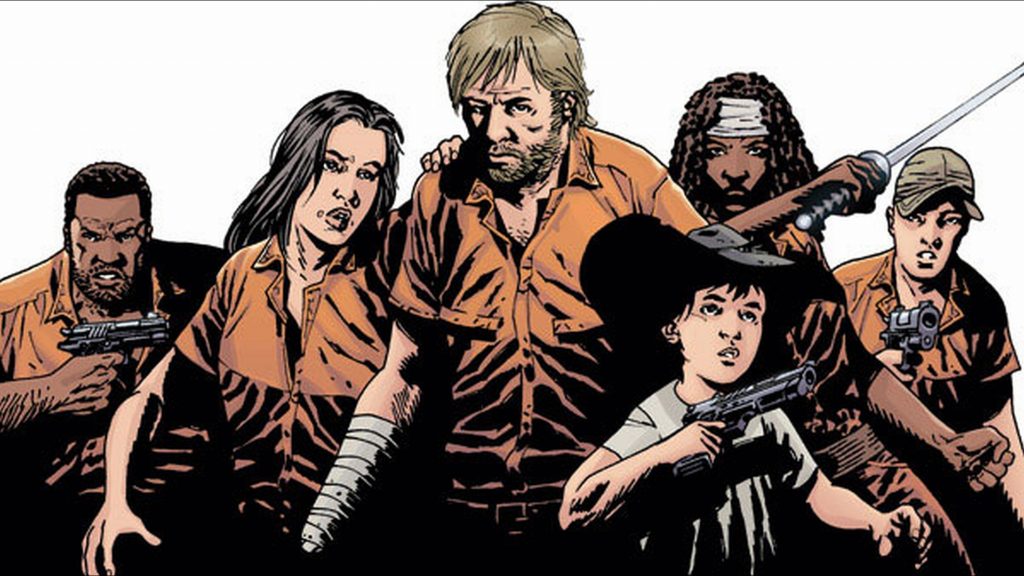 Where To Start With The Walking Dead

The Walking Dead Compendium editions are enormous collections of over 40 comic book issues all in one book.

The crazy/amazing thing about the Compendiums is that they blend all the issues together into one story, with no comic book covers separating each issue/chapter. As a result you essentially have a 1,000 page graphic novel in your hands. As I’ve found while staring at 2:00 a.m. blinking on the clock, good luck putting one of these down.

This is the easiest, fastest, and frequently most affordable way to read the entirety of the Walking Dead saga to date. Although they’re more affordable than individual trades

(usually about 6 issues at a time), each Compendium only runs between $30 to $40. Again, that’s less than a dollar per issue, which in the comic book world is an absolute steal.

1) The Walking Dead: Compendium One

The closest The Walking Dead comes to spin-offs are in the form of some expanded universe novels. The most prominent of these can be read in the wake of The Walking Dead #48 (I would highly recommend you complete the first compendium before moving to the novels). You do not need to read the novels to understand what is happening in the comic book series, they just offer additional stories.

Novels — The Walking Dead: Rise of the Governor and the Road to Woodbury

Novels — The Walking Dead: The Fall of the Governor: Parts 1 and 2

If you want to start a little smaller, or simply in more manageable chunks (those compendiums aren’t exactly easy to read on a commute, for example), the Walking Dead TPBs (trade paperbacks) are your best best.

Most TPBs can be found for around $10 to $15 (or less than $5 if you’re willing to buy used). They typically contain six issues of the series at a time, which can typically be read in around an hour or less.

As you can undoubtedly tell by now, Walking Dead TPBs follow a very clear reading order, progressing from one volume to the next, six issues at a time. The 10 TPBs above cover the first 60 issues of the Walking Dead. There are over 20 TPBs currently, and that number will continue to increase as The Walking Dead remains an ongoing comic book series. Robert Kirkman has said in interviews that he could do the Walking Dead for 1,000 issues, which would be both unprecedented and probably last for the remainder of everyone’s lifetime.

So there you have it, a straightforward reading guide to starting with Walking Dead comics. Feel free to reach out @ComicBookHerald with any questions, and as always, if you see a sign that says “ALL DEAD DO NOT ENTER,” maybe turn around?