You are here: Home / Featured / The Greatest Suicide Squad Stories of All Time!

The Suicide Squad! One of the most obnoxiously brilliant ideas in comics, supervillains forced to do heroic missions under threat of death, is a beloved classic within the DC Universe. Well. Sort of. While the original run in the 1980s, courtesy of John Ostrander and many artistic partners, is considered one of the all-time greats of superhero comics, the team’s track record outside of Ostrander’s care is…hit or miss. With James Gunn’s revamped The Suicide Squad on the way next year, it seems like the perfect time to point out the most remarkable stories in the team’s history for you to check out ahead of the movie. At the very least, they won’t be as bad as that first flick. 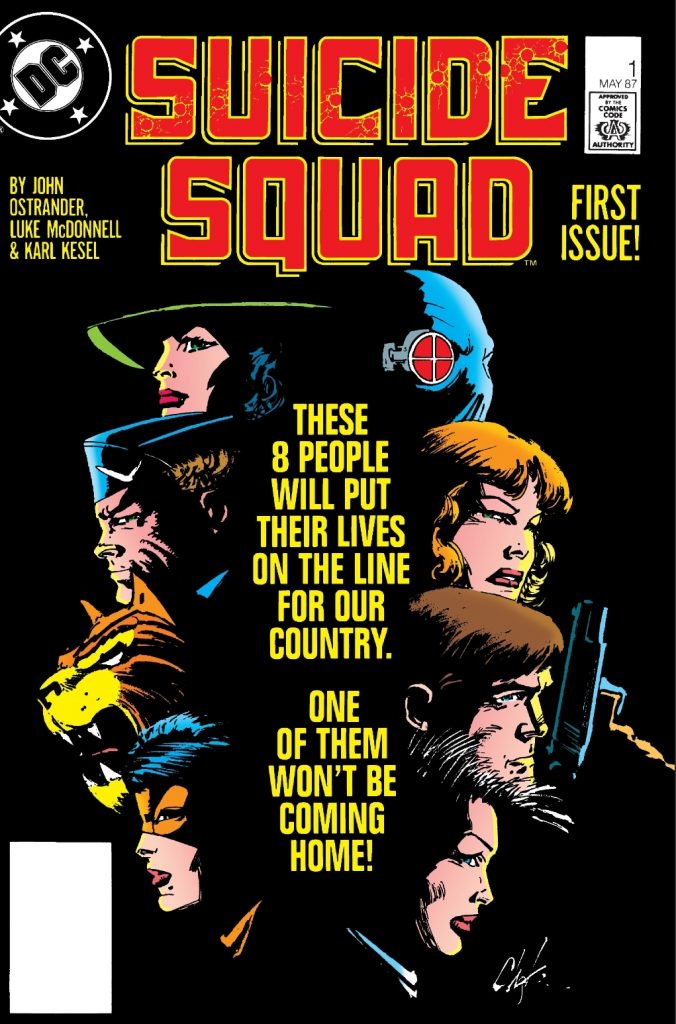 Starting at the beginning, the first two issues of Ostrander’s Suicide Squad, sporting art from Luke McDonnell, instantly established the series’s tone and set it apart from the sea of superhero titles struggling to find their identities in a post-Watchmen and TDKR world. Slick, cinematic, and violent, Suicide Squad was effortlessly cool and entertaining in a way that many comics would fail to achieve even decades later. From the misfit cast, including future team mainstays like Deadshot and Captain Boomerang, to a genuinely iconic cover for issue #1, the two-part debut remains one of the strongest starts to a series in DC’s history and a genuine classic.

While the New 52 was a dark time for many DC characters and teams, one of the hardest hit was, inarguably, The Squad. With all nuances and intricacies stripped away for gratuitous sex and violence, the first year and a half of the series’ revival was a low point for the team. That changed once Ales Kot took over the title’s writing duties. Joined by Patrick Zircher, the pair revamped the title into a chilling, horror-tinged series that was unafraid of spotlighting the prisoners’ nightmarish treatment serving their time on the squad.

With James Gordon Jr. as a Hannibal Lecter-esque overseer manipulating the team’s psyches under Amanda Waller’s orders, the writer’s four-issue run is often tragic, violent, and horrifying, and never more than in its opening story. It’s also absolutely fantastic and the only real high point for the title for several years.

Okay, this one’s a bit of a cheat. Technically, it isn’t a Suicide Squad story. Amanda Waller is nowhere to be found, and Deadshot is the only member of the group with any significant history with The Squad. However, given the Infinite Crisis tie-in from Gail Simone and Dale Eaglesham features a team of misfit supervillains bound together by a mysterious benefactor who will kill them if they step out of line, it’s close enough in my book.

Reviving obscure characters like Catman and Ragdoll into beloved cult favorites while wonderfully using the team’s status as the lone holdouts against the Secret Society of Supervillains’ rise to replicate the against-the-odds atmosphere of Suicide Squad, the series is a delight. While the subsequent Secret Six ongoing and New 52 revival are well worth reading, they stray from the core Suicide Squad energy that the original miniseries achieved, earning it a very welcome place on this list.

Several years into his run, Ostrander achieved one of the trickier feats in comics: a seamless revamp of a title without losing a step. With Amanda Waller in prison and The Squad scattered across the globe, the team is forced back into action by the unlikeliest of heroes: Batman. The Caped Crusader springs Waller out of jail, finding himself forced to rectify past mistakes and reunite the Squad under her leadership.

With art from Geof Isherwood and an exciting renewed focus on the series as a political thriller, “The Phoenix Gambit” is a wonderful tale that succeeds where so many other series have failed, successfully breathing new life into a series nearly 5 years into its run.

When Tom Taylor and Bruno Redondo, the powerhouse duo behind Injustice, were announced as the creative team relaunching Suicide Squad in 2019, folks were pretty dang excited. Those lofty expectations were handily met in the series’ debut, offering a double-sized issue full of surprises, laughs, and a shocking body count.

While the rest of the recently-concluded volume suffers as it becomes clear the title was more a backdoor pilot to the cast of new Revolutionaries than a proper Suicide Squad title, the debut holds up as a fantastic introduction that hits every note you would want in the series. 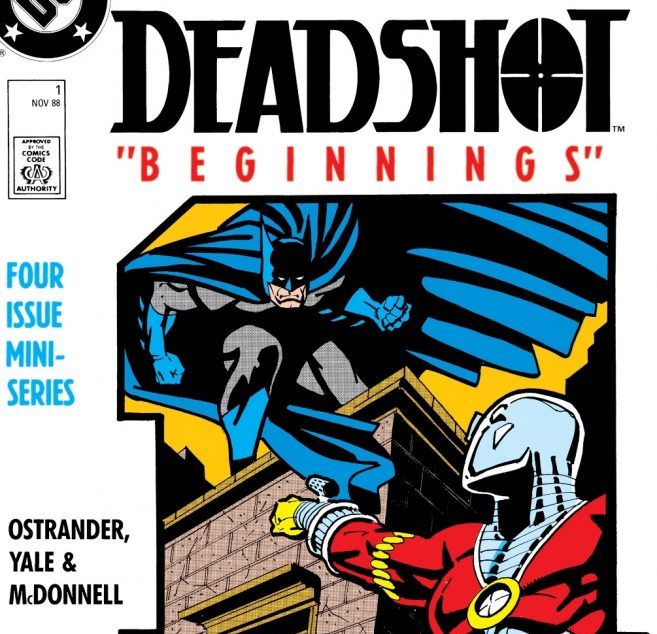 Okay, I know. That says Deadshot, not Suicide Squad. But, as far as I’m concerned, the two are inseparable. Deadshot is the sole constant of each entry on this list and the closest thing The Squad has to a lead character. Spinning out of the Suicide Squad ongoing and written by John Ostrander himself, the Deadshot miniseries is a classic character study that belongs on this list.

Rebuilding Floyd Lawton from a D-List Batman villain into a captivating man fueled in equal parts by a death wish and his, frankly, messed up childhood as part of an old-money Gothamite family. Joined by Suicide Squad veteran McDowell, the mini-series is arguably the most significant overhaul a supervillain has ever received and the gold standard for solo spotlights.

Probably the wildest story in Ostrander’s run and full of classic moments that could only happen in the DC Universe. After playing host to Lashina, one of Granny Goodness’ Female Furies, for 30 issues, she abruptly decides to leave the team and return home, dragging a chunk of The Squad along with her. With the team incredibly outgunned on the planet of evil New Gods and fighting just to survive, it proved how versatile Suicide Squad could be and provided some delightfully bizarre showdowns that hold up to this day. Amanda Waller vs. Granny Goodness remains one of the greatest clashes you would never expect and earns this spot nearly on its own. 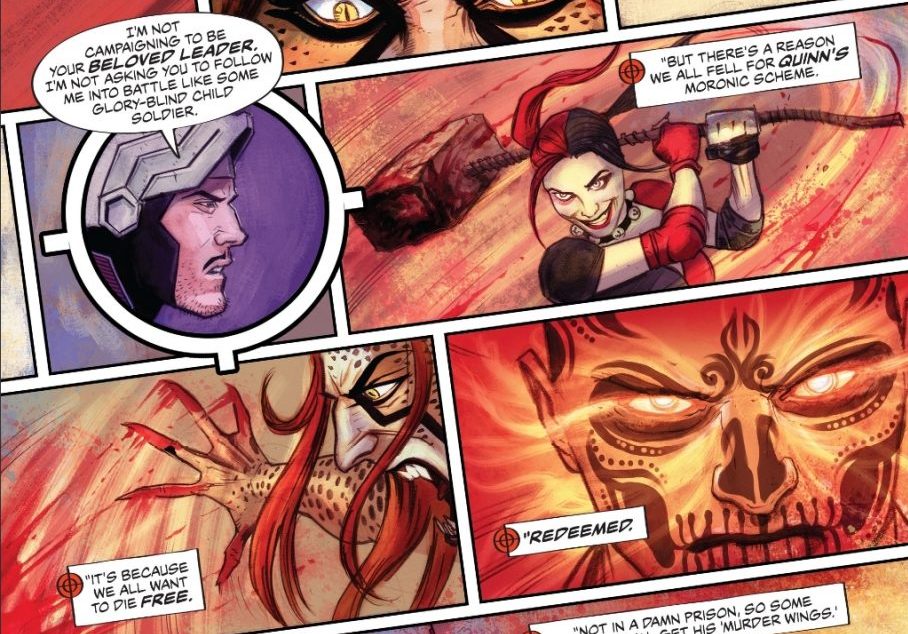 New Suicide Squad, the poorly received relaunch of the New 52 era title that upped the action and included dreadful characters like Joker’s Daughter, seemed like it would just be relegated to the bottom of the pile of Suicide Squad tales, much like the bulk of its predecessor. Then came Tim Seeley and Juan Ferreyra.

The duo’s sole arc with the team embraced the absurd violence and black humor more than any creators before, pitting The Squad up against a cult of murder-worshipping killers in an old European castle. While the writing is well executed and often very clever (Seeley’s use of Harley Quinn is easily the best since she joined the team in 2011), what cements the story as an all-time classic is Ferreyra’s art. Gorgeous, fluid, and full of inventive layouts, is the best a Suicide Squad comic has ever looked, full stop.

Well, that’s a whole lot of books that aren’t Suicide Squad, huh? An 11-part crossover that brought together the various espionage focused titles of DC’s post-Crisis heyday, “The Janus Directive” does spotlight many non-Squad teams and heroes. Still, it earns its placement on this list through one of the most significant spotlights Amanda Waller has ever received. Putting her front and center in the storyline’s far-reaching Kobra plot and proving integral to stopping them is a testament to Waller as a character. It directly leads to the later status quo she finds herself in during “The Phoenix Gambit.” 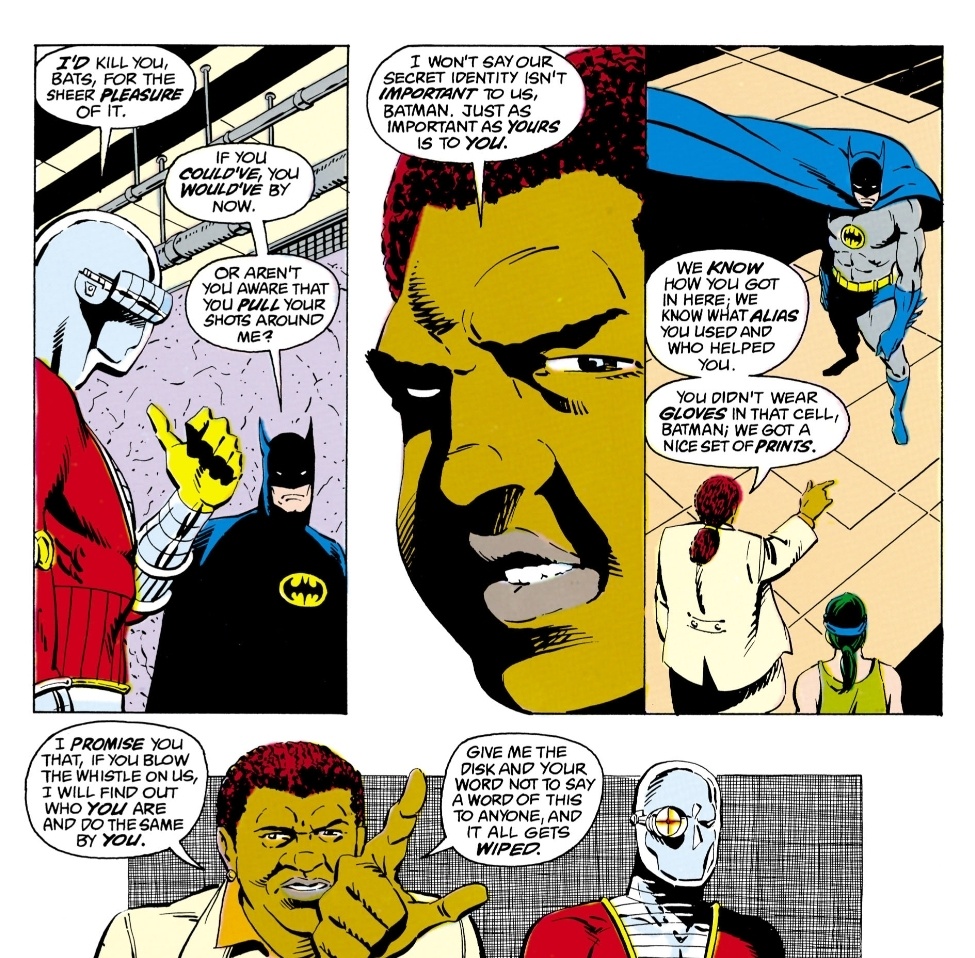 This is the issue that made Suicide Squad something special, a series to take note of. Split between two narratives: a focus on the civilian support staff that keeps the team running and a break-in attempt by none other than Batman himself, it proved that the title was not merely another short-lived supervillain spotlight, but a new, exciting facet of the DC Universe. From Reverend Craemer’s quiet joy at being able to try and help the sinners among us to the iconic image of Amanda Waller starting down The World’s Greatest Detective and having him blink first, it is an encapsulation of the sheer quality of storytelling that Ostrander and co. would bring to the series for years to come.