You are here: Home / Featured / The Essential Nightcrawler Reading Order!

Nightcrawler’s been my favorite X-Man as long as I can remember. This stems from some combination of the X-Men Arcade Game and the Age of Apocalypse inspired action figure with a flaming sword. I don’t know how many 7 year olds were rocking the blue and red with a spiked tail at their elementary school Halloween, but I’m right there with you.

Despite my adoration, and his success as a member of the All-New All-Different X-Men, Kurt Wagner’s never quite broken through to superstardom like Wolverine, or had the cinematic pop culture focus of Cyclops, Jean Grey, Professor X, etc (although the opening sequence to X2: X-Men United is still probably my favorite superhero movie-going experience). There have been a handful of Nightcrawler solo comics, but none that made it more than twelve issues.

As such, a little curation through the best of Nightcrawler can help enjoy the character’s trajectory through Marvel comics history. Below you’ll find my essential guide to Nightcrawler comics. Enjoy the comics! 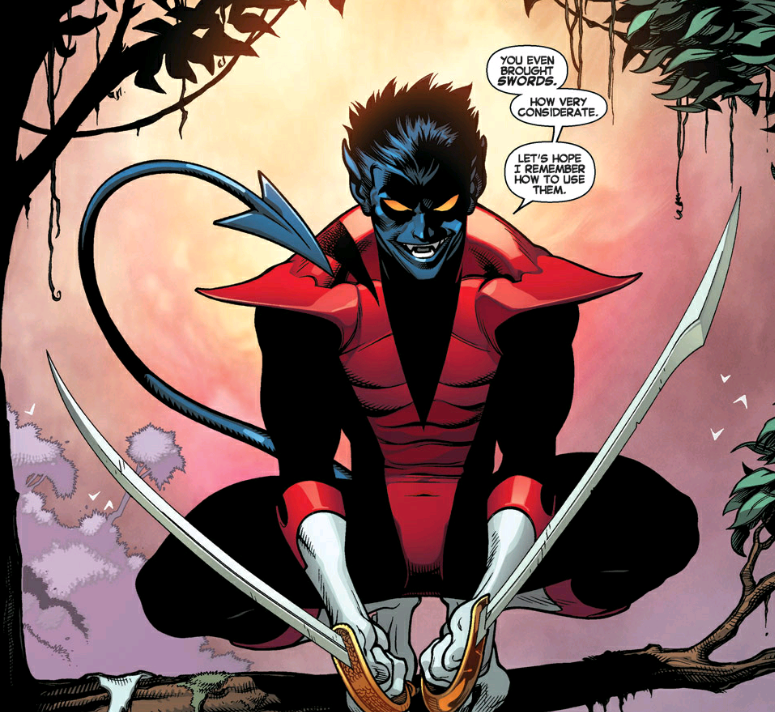 The reality is I’d recommend the Chris Claremont written Uncanny X-Men with Nightcrawler as a core member from 1975 to 1988. Obviously, that’s a lot of comics, but it’s also a lot of really damn good comics, so there are worse recs.

If I had to pick particular Nightcrawler favorites, off the top of my head I’ll always love Uncanny X-Men #168 (because Kurt surprises girlfriend Amanda Sefton by appearing in a sexy pose on her couch with a plush Nightcrawler doll over his private bits), Uncanny X-Men #183 (when Kurt and Logan take Colossus to a bar to talk some sense to him after he broke Kitty’s hurt, and then they fight Juggernaut), and Uncanny X-Men #204.

Character creator Dave Cockrum returned to Kurt for his first solo series in 1985. It’s a fun blast to an alien society that cements Kurt’s love of sword-fighting, challenging pirates, and falling for apparent damsels in distress. The mini, which is written and drawn by Cockrum (a rarity for the era with nearly all X-books written by Chris Claremont!), also introduces the BAMFS!

During the 1988 series launch of Exaclibur, Nightcrawler makes the transition from Uncanny X-Men to Exaclibur, teaming up with Kitty Pryde, Rachel Summers, Captain Britain and Meggan (among others). Nightcrawler would feature as a regular for the vast majority of Excalibur‘s series life through the 90’s, and works as a nice fit for the team’s cross-time capers. A personal favorite issue of mine falls in between the more well publicized Chris Claremont and Alan Davis runs, with Excalibur #31 detailing Kurt’s solo adventure to an island that contains a being who claims to the son of Krakoa. It’s Nightcrawler at his swashbuckling, quippy best (although you could certainly turn to Excalibur #16 for “Warlord of Mars” Nightcrawler to get a similar vibe).

Not overly special, but a really nice look into Kurt aging with the X-Men during their time living in San Francisco. Kurt considers quitting the X-Men before visiting a museum set up to honor him in his home town in Germany. Story by James Asmus with art by Jorge Molina.

It’s also worth noting there’s also a 2004 12 issue Nightcrawler solo series before this (his longest to date), but the work by Roberto Aguirre-Sacasa and Darick Robertson left me cold. That said, it’s a supernatural horror take on the character, with some interesting ideas with Amanda Sefton, Nightcrawler’s longtime paramour (and maybe step-sister?).

The follow-up to “X-Men: Messiah CompleX

” leads to one of the biggest moments in Nightcrawler history. 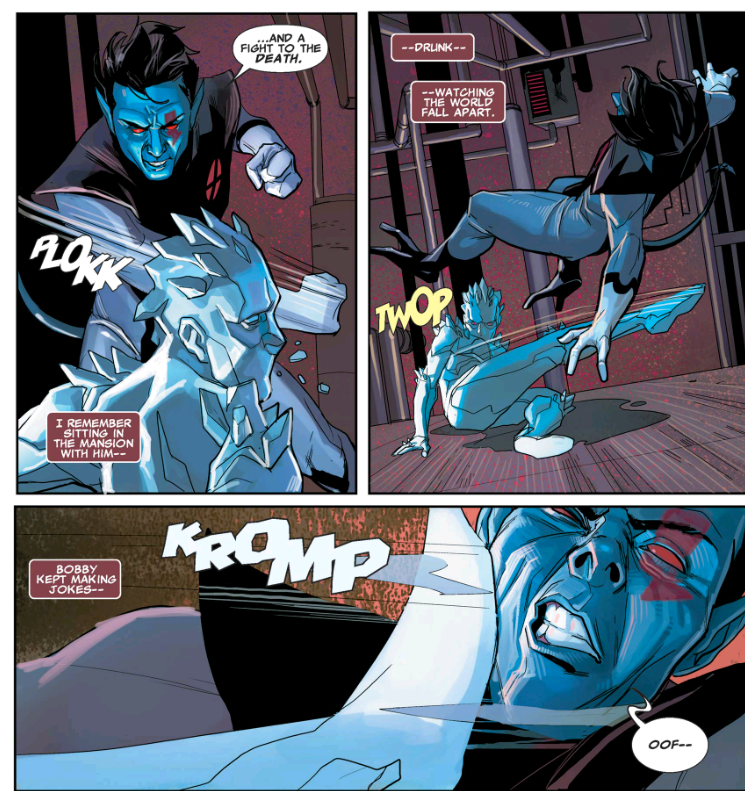 The Rick Remender written Uncanny X-Force is a perpetual recommended comic from me (it’s straight up on my best of the decade list), so yes, it’s fair to say I’ll include it any chance I get. In this instance, Uncanny X-Force is the rare book to make use of the “Age of Apocalypse” universe Nightcrawler. Plus, the interiors are by Phil Noto, making the comic even more of a must.

(I would also recommend reading the original Age of Apocaplyse here, but that’s really just an evergreen comment.)

Wolverine has to fullfill a nearly impossible task to honor Kurt’s written will. It’s a beautiful coda to Second Coming.

“The Quest for Nightcrawler” is shockingly enjoyable, from the grade-A creative collaboration of Aaron and McGuinness (now on Avengers). It’s a literal X-Men rescue mission in heaven (and possibly hell), and Aaron captures so many of the character interactions between Nightcrawler and the X-Men that make the unit special.

X-God Chris Claremont made a rare 2010’s return to Marvel for twelve issues on the recently resurrected Nightcrawler, with fantastic interiors by Todd Nauck, and even more stunning cover work by Chris Samnee and Jamie McKelvie.

The all too short X-Men Red by Tom Taylor and Mahmud Asrar is definitely a Jean Grey story at heart, but it’s well worth including in a Nightcrawler guide because 1) It’s great and 2) Nightcrawler sports a sick beard game.

Age of X-Man: The Amazing Nightcrawler

The occasionally fascinating, often forgettable Age of X-Man is destined to go down as the X-era time forgot (most cynically, it’s the placeholder before Hickman’s X-Men), but credit where it’s due, the Age of X-Man does give Nightcrawler deserving star status.