A both touchingly somber and by-the-numbers celebration of the life and death of the titular Sorcerer Supreme, the five-issue miniseries The Death of Doctor Strange by writer Jed MacKay, artist Lee Garbett, colorist Antonio Fabela, and letterer Cory Petit occupies a unique, challenging position as the end of one long and winding story and the beginning of another.

Starting with a touching introductory issue eerily similar to All-Star Superman, which sees Stephen Strange acting as an adept and newly grounded mentor, teacher, friend, and, well … only okay-ish pet owner, and ending in his untimely death (spoilers!), Death of Doctor Strange finds itself mostly preoccupied across the remaining four issues with investigating who perpetrated Strange’s death, along with inter-dimensional invasions setting a dire background.

The twist? Another version of Strange himself, secreted away many years ago in a phylactery-like process that we don’t have time to fully unpack, is deployed via magical failsafe to lead that investigation, apprehend the perpetrator, and save the Multiverse (nobody says “of madness” here, but let’s assume) from an all-new encroaching evil.

Not a bad hook! But also, one that invites as many of the series’ lows as it does its highs with huge implications and only narrow payoffs in an already limited mini-series structure.

This is to say that the best stuff series-wide is the exploration of Strange’s impact on his friends’, family’s and even enemy’s lives, and of his unique place as a kind of magical immune system for Earth. Here MacKay gets to tell an interesting story of personal growth: We see the deceased Strange as a trustworthy friend to Wong and Bats, a mentor to Illyana Rasputin, a leader to the students of Strange Academy, a remorseful one-time partner to Clea Strange, and even a restrained foe to Baron Mordo, among others. He has grown past his worst selfish impulses, he has loved, and he has lost – and through this (most of which has been chronicled in the preceding canon of stories across numerous series) he has become a man of great renown and respectability.

The newly released aspect of Strange with only a week to solve his own murder, however, is very few of these things. He’s in-tune with the magical world, sure, but he’s intentionally lacking in the character depth of the previous Doctor Strange. He introduces himself as a master of Black Magic, he’s proper but short and cold, and in a more serious moment, he threatens grievous harm against Baron Mordo, suspecting him of foul play. He is only a suggestion of the man that our Stephen Strange had become, all the more reason to solve that one’s murder as MacKay keenly re-centers throughout the story’s various narrative threads.

This is no more apparent than in the series’ best moment, where the partial Strange shares a private moment with Clea, Sorcerer Supreme of the Dark Dimension and estranged former wife of the titular character. She sees a man that looks exactly like her lost love, one who only gave their love up in a risky deal with Mephisto to save the world. Meanwhile, “investigator” Strange can only be a man that a different woman, in a different time, once loved. There’s both weariness and a longing to this conversation, a deep sadness that very few event comics ever consider, let alone achieve, that speaks to MacKay’s inherent understanding of the interpersonal implications at play when rebooting a longstanding legacy character like this.

The examination of Strange’s place as an essential piece of a much larger, interlocking magical system is also intriguing. Yes, it’s the necessary narrative heightening element for an event series such as this, but the immediate invasion of Earth by outer dimensional Sorcerers such as Dagoth and Aggamon upon Strange’s death demonstrates not only how Strange had become accustomed to the Multiverse at large, but how it had become accustomed to him as well.

Take the scene where the “Three Mothers,” the caretakers of the series’ ancillary but scene-stealing villain (debuting Peregrine Child) first appear. This would be a relatively compelling scene on its own, with Garbett’s best work of the series in the three’s equally ethereal and entropic designs, partnered with Petit’s rapidly changing and character-driven lettering choices. But it’s elevated further by the interplay between Clea, the pseudo-Strange, and the Avengers. Here, everyone is grasping at their usually more secure station as the Mothers poke holes in their defenses with relative ease. The implication is that had there been a more experienced and capable Strange here, things would not get as bad as they eventually do for all the parties involved. 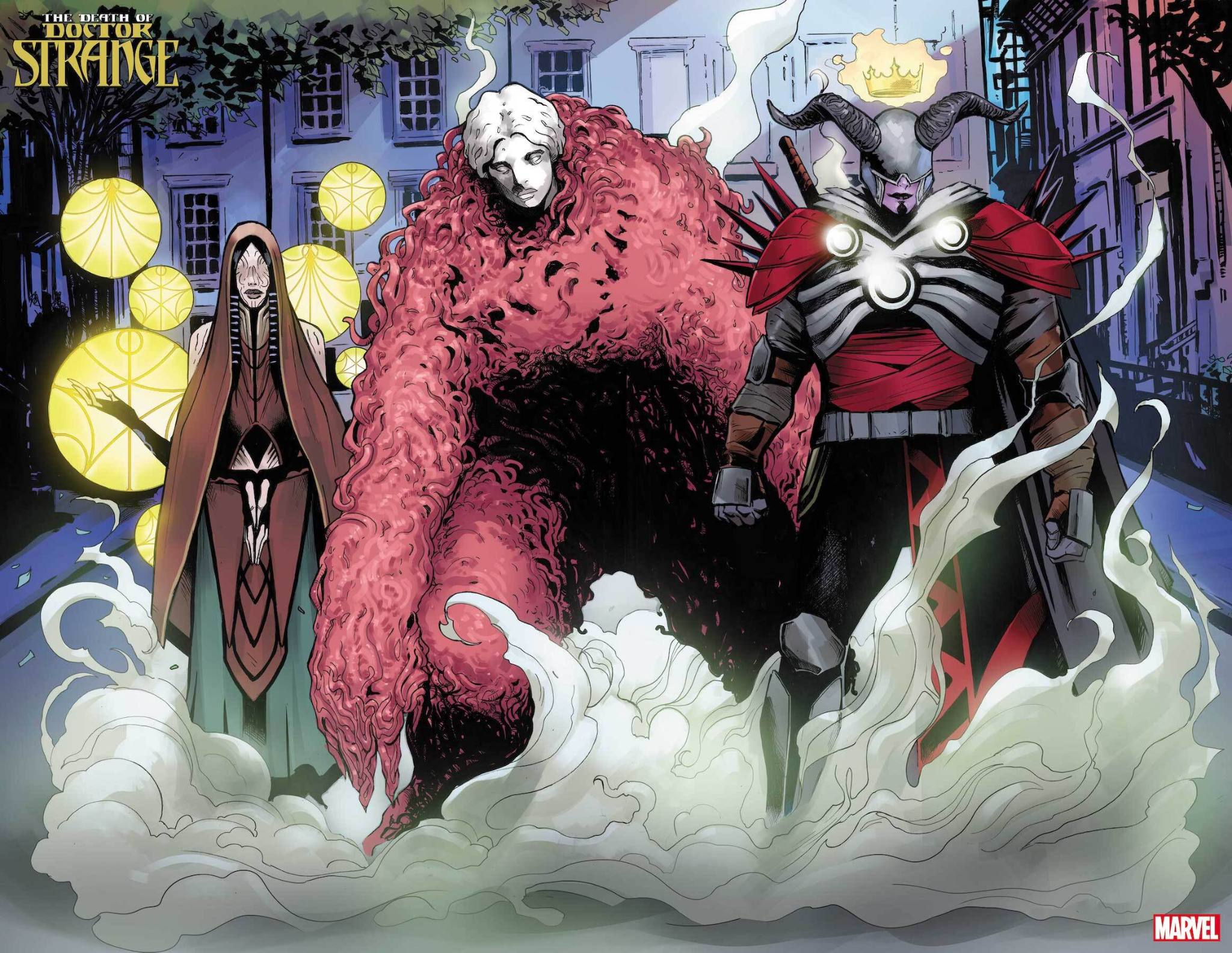 It’s this consideration of the whole of Stephen Strange’s being that has the potential to elevate the series beyond the typical Marvel event trappings, and in these smaller moments, it almost works.

Unfortunately, the stilted pacing and arbitrary structure of the book go almost full circle on holding back these moments.

For every story like Clea’s (or Bats’, which is touching but narrow in purpose), there’s the complete lack of depth in the resurrected Strange’s relationship with Wong, who mostly gets relegated to underdeveloped sidekick status. Or the lack of anything other than “You don’t know me, do you?” moments for Magik and Zelma Stanton, and nothing for the young student who first alerts the deceased Strange to danger in the outer realms.

Yes, this is a problem born out of the series’ no doubt publisher-mandated issue count, but it is certainly not helped by the frequent pacing missteps MacKay makes. Pages wasted on pointless chapter breaks and scene transitions, variations on new-Strange saying that he doesn’t know such and such – it’s mostly just awkward and sterile but at times it’s such a hindrance that it feels like an insult to the reader’s time. These pages hint at all kinds of the depth of narrative and character interaction to be had, but only tangibly follow up with one or two beats in favor of establishing a non-necessary narrative structure and at best half-developed “big bad” (whose motivations I still don’t fully understand). It’s easy to look at the eventual reveal of Strange’s killer as a cynical movie-centric cash-in, but that one short moment is singularly more impactful than the entirety of the bigger antagonistic picture, which MacKay would’ve had considerably more time to deliver on without weird flights of narrative design fancy.

When the story reaches its conclusion, it feels satisfying in spite of, not because of, the actual work of the issues preceding it. Again, it implies a massive depth of story to tell, the hook being that readers don’t know here if that will actually be delivered on in the following series at all. It’s a kind of parlor trick, fitting the character and opening the door for a new beginning, but less inherently interesting for the reader who’s just gone through the paces of this team’s attempt at an epilogue.

Similarly, Garbett’s work satisfies in the big picture but falls apart in the moment-to-moment storytelling. The Three Mothers and the Peregrine Child are otherworldly and evocative in their eldritch ways, the invading worlds of the outer realms all unique and realized, but there’s little else to grasp on to.

Ultimately, the problem is that this is a talkative comic, and Garbett’s work is ill-suited for making interpersonal beats and dialogue interesting. Most scenes boil down to one character stuck mid-action – taking a step, yelling, etc. – while the others file around them as a cast of talking heads. There’s no dynamism, no angle or zoom, no scope or point of view. Sometimes punctuated with interesting two-page spreads and action scenes, the book is mostly a sterile series of conversations with little to none of the magic the titular character is known for. It’s disappointing, and a rather large disservice to the dynamic and well-palleted colors of Fabela and the aforementioned character-specific interplay of Petit’s lettering. 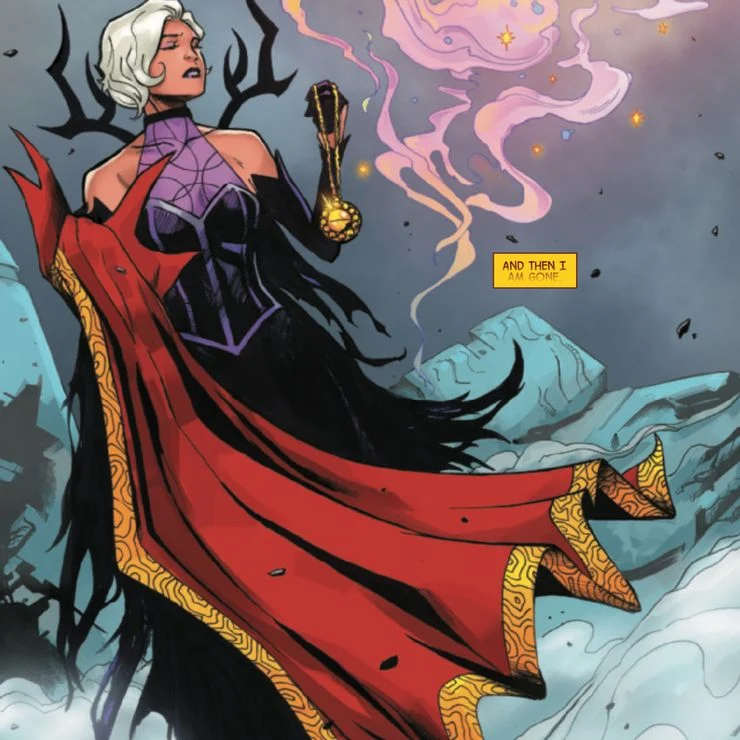 Perhaps it’s fitting to the character that in the end, The Death of Doctor Strange feels more like an autopsy than an effective eulogy. Sometimes sterile and meticulous and occasionally fascinating and natural, the shape of the story is overtly familiar: it has the requisite brain in its central ‘whodunnit’ mystery, the flexing of muscles old and new in its articulate but infrequently used action scenes and even a decent amount of heart in its complicated romantical and familial implications.

What it only frustratingly grasps at, however, is the soul. The series is elevated beyond its perfunctory reboot purposes when its enchanting central character shines through, but more often than not, it prefers arbitrary processes in place of organic storytelling. Souls are hard to get ahold of, after all.