While not as celebrated a villain as others in the Dark Knight’s rogue gallery, the Scarecrow is still one filled with potential. Like many Batman villains, the Scarecrow is a dark reflection of Batman himself, in this case, through the use of fear and intimidation. The entire reason Batman puts on his costume is to inspire fear in the hearts of evil doers, however with Scarecrow, fear is something he wants to inspire in everyone. It’s something that deeply fascinates him to the point of obsession.

Unlike Joker, Two-Face or even Riddler, Scarecrow gains a lot of his recognition from outside source material, such as his portrayals in cartoons such as Batman: The Animated Series, games like the Arkham Asylum series, and even block buster movies such as The Dark Knight Trilogy where he is portrayed by Cillian Murphy. When it comes to actual comic book stories, good Scarecrow stories are few and far between. But there are fundamental issues and story arcs that show just how impactful or impressive the character can be. While there still really isn’t a definitive Scarecrow story, each of these present the master of fear in a sinister and deadly light.

The Riddle of the Human Scarecrow (1941)

Appearing in World’s Finest #3 this is the very first Scarecrow story. It’s not the most ground-breaking of stories, but as an introduction issue, it sets the tone for the character. The story introduces the character of Jonathan Crane, setting him up as a University professor, with his lifelong inferiority complex and bitterness towards others, as well as his fascination with fear toxin. Given this is his first meeting with Batman and Robin, the journey to foiling him involves some good old fashion detective work. An old story, but a classic none the less.

Appearing in Joker #8. An absolute classic from Joker’s solo series. The Scarecrow’s Fearsome Face Off sees Joker steals a new strain of Fear Gas from STAR Labs and begins a competition with Scarecrow as to who can create the most effective version of the formula. Scarecrow focusing on the actual fear element of the formula, while Joker taints it with Joker Toxin. It’s from Joker’s own short liked solo series, meaning it does focus heavily on the Joker, but seeing the two villains play off of each other, especially in the bronze age of comics is an absolute treat.

Appearing in Detective Comics #571. Fear for Sale turns the trope of Scarecrow causing fear on its head. Instead, he creates a way to completely eradicate fear from a person’s mind. At first, this seems like a detriment to his mission, but when a person fears nothing, they become reckless. Fear, even on a minor level, is what keeps people alive. Combine both the ability to draw out extreme fear, and render one reckless beyond belief, this maybe the deadliest Scarecrow has ever been.

While it is not focused on Scarecrow, Arkham Asylum: A Serious House on Serious Earth is a Batman story that every fan should read, especially when it comes Batman villains. Scarecrow’s role is very small, but it’s in how he’s portrayed, in the intensity of the scene, that we get perhaps the truest interpretation of Jonathan Crane at his core.

Knightfall and God of Fear

Knightfall, particularly it’s first third, featured many Batman villains. Much like in Scarecrow’s Fearsome Face Off, Scarecrow finds himself matched with the Joker. However, this time, they end up teaming up to cause terror. Taking the Mayor hostage and slowly torturing him with doses of Scarecrow’s fear toxin. Immediately after this encounter, Scarecrow begins to run experiments on helpless students at the University. Torturing them to become his faithful minions. This moment in Scarecrows history is perhaps his most callously twisted. The complete lack of empathy causes it to be one of the most memorable moments in Scarecrow history.

What happens when a company has the bright idea of inviting Arkham inmate, Jonathan Crane, to present a lecture entitled ‘The Fear of Success’? Nothing good can come of this. Especially when Bruce Wayne and his bodyguard, Sasha Bordeaux, are a part of the crowd. As expected, Crane attempts a stunt to free himself and gain access to his mask and formula, but how does Bruce save those around him without blowing his cover? The story, while short ends up becoming incredibly personal for Bruce, despite being a one and done issue.

Spanning five parts, As the Crow Flies (Batman #626 to #630) sees Scarecrow and the Penguin disturb Gotham city. However, this is not Scarecrow as you’ve come to know him. Penguin is out for blood, and as a part of his grand plan, he has Jonathan Crane transformed into a creature of pure murderous intent known as the Scarebeast. A creature imbued with intense strength, endurance and capable of releasing an intense strain of hallucinogenic gas. Perhaps this is Crane at his most deadly. 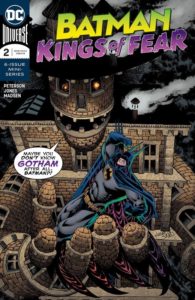 Scarecrow is once again up to his old tricks, spreading fear across Gotham city, but especially in the mind of Batman himself. Only this time, fear gas is rarely needed. The weight of Batman’s responsibilities is weighing on him, wondering if he has been wasting his time with his mission. Doubt, fear and insecurity fill Batman’s mind, and Scarecrow is doing his best to coax it all out of him.