It’s not always easy being the X-Men. As advertised, they are “hated and feared by a world they’re sworn to protect.” However, they are also capable of selling millions of comics and becoming household names.

Indeed, their very publication history would graph with quite the insane peaks and valleys of popularity- from cancellation and reprint limbo to perpetuating one of the most unwieldy multi-title franchises.

That being said, it’s truly been some time since fans have been genuinely excited about Marvel’s Children of the Atom. All that has recently changed with the launch of Jonathan Hickman’s slate-cleaning take-over as the intertwining mini-series House of X and Powers of X currently unfold and astound.

The decade preceding Hickman, though? It’s now cemented between what’s quickly becoming some very large shadows- lest we all forget that the early 2000s era sees such top-shelf highlights as Grant Morrison’s New X-Men

by Joss Whedon and John Cassaday.

If all that sounds like the franchise struggles for a bit of time, that wouldn’t necessarily be an untruth. However, the X-Men are no strangers to adversity- if anything, they literally train in a room that likes to throw dangerous curveballs at them.

In the past ten years there are still some noteworthy main team X-stories to be had (sorry, Uncanny X-Force

– feeling it but this is not the list). Let’s take a look now at some of these non-spinoff/ non-solo/ non-event/ non-crossover adventures… and see if we can survive the experience! 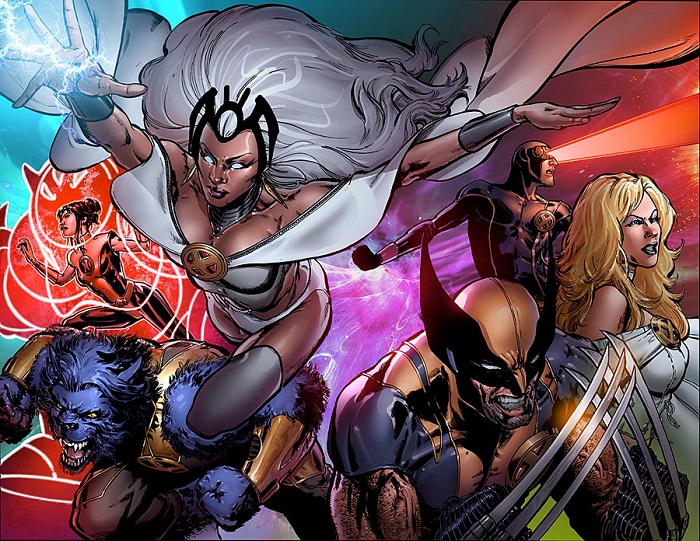 Continuing the title after the departure of the aforementioned high-profile team of Whedon and Cassaday, another “big gun” creator is brought in- writer Warren Ellis, working in conjunction with an array of artists.

While the Ellis X-material leans more into the “bleeding edge” sci-fi of it all (see his work on Iron Man: Extremis

), it’s not a radical reinvention of the wheel as there are many nods to what’s come before. Sure, sometimes they’re controversial and other times they’re downright grotesque (undead meat Sentinel firing insect alien Brood missiles, looking at you…) but it’s never quite that whole step over into the unfamiliar.

While this particular story features incredibly gorgeous work by artist Phil Jimenez, it also showcases the Beast’s penchant to be outsmarted by his own desparations in super-science- a motif that will arise again and again within the decade to come.

Even the flagship Uncanny title of the day isn’t immune to the “all-new, all-different greatest hits package as mitigating damage control” delivery system. After the events of House of M and Dark Reign: Utopia force the dwindling number of X-Men onto an island nation off the coast of San Francisco, it is certainly time to take stock and reassess.

Again, writer Matt Fraction isn’t so concerned with pushing earthshaking “everything you thought about blank is wrong” revelations and re-evaluations as these stories reflect a general “can we just take five and catch our breath here?”. But, of course, it’s the X-Men and it’s never gonna go off like that…

Here, you get call-backs to not only the then-recentish Messiah Complex

crossover but also a bevy of the Grant Morrison material. A dangling plotline from the Silver Age finally comes to fruition (Namor joins the X-Men). Most of all, a Chris Claremont-era plot device (Magneto on the side of the heroes) literally course-corrects the divisive conclusion of Joss Whedon’s run (Kitty Pryde stuck on an intangible space bullet).

Through all of this, there’s also a grouping of Wolverine, Fantomex and Psylocke as a sorta inadvertent foreshadow to Rick Remender’s Uncanny X-Force 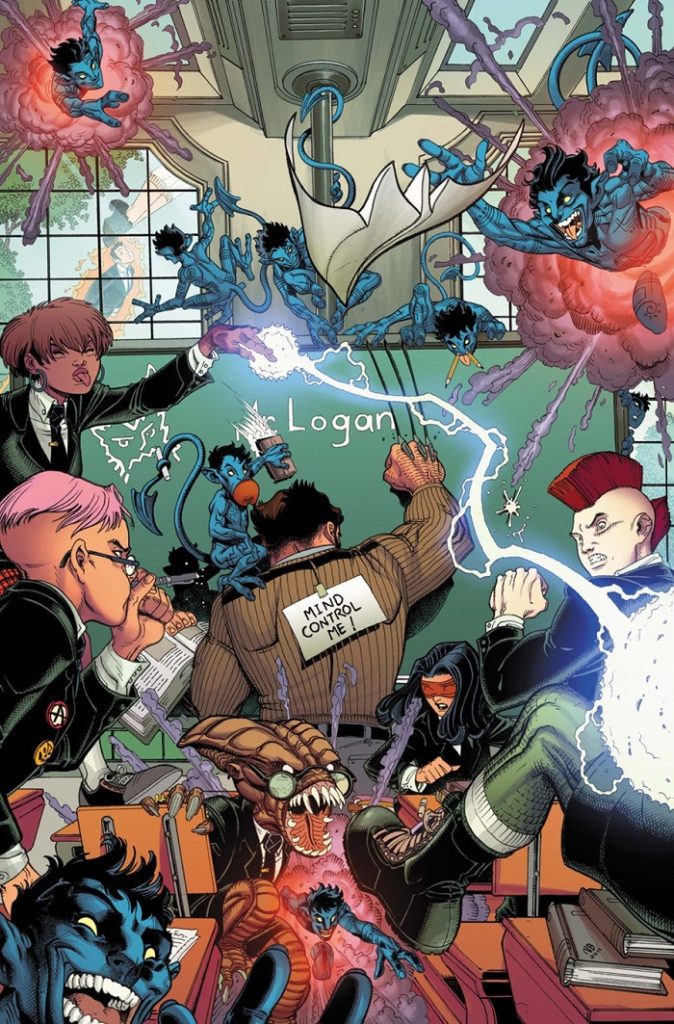 Wolverine and the X-Men By Jason Aaron Vol. 1

Can’t remember the last time when the X-Men was all about the kids and fun? Yeah, well, oddly enough- neither can Wolverine…

After a philosophical divide results in an actual throwdown, Wolverine splits from Cyclops’ survivalist island. Taking half the X-Men with him, they return to New York and (re-)open the Jean Grey School for Higher Learning.

Not only is it smart, fun and entertaining but it’s also extremely new-reader friendly as well as quite possibly the most all-ages friendly X-book in continuity. It may be overextended praise but after years of “backed into a corner” darkness, this story collection serves as a most welcome ray of sunshine!

In late 2012, writer and career franchise wheel reinventor Brian Michael Bendis (Ultimate Spider-Man, New Avengers) enters alongside one of his familiar art teams, Staurt Immonen and Wade vonGrawbadger (Ultimate Spider-Man, New Avengers). While the scope of their work is bold and brazen on a conceptual level, it’s met quite favorably- particularly in this opening salvo.

Possessed by the Phoenix Force, Cyclops kills Professor X at the culmination of the Avengers vs. X-Men

event. Wanting to shove his ex-BFF’s face in it one more time before his own mutations go terminal, Beast time-travels back to Year One of the X-Men and convinces the young versions to go with him (wait for it)… back to the present!

It’s a whole new day as the past doesn’t want to go back comfortably knowing how rough things turn out for everyone. In all, it really is the most “out there” concept the X-titles have seen in some time, so in that alone- props. But, really, who’d ever imagine that the legs of this idea would see these kids hanging around in the books for six years?? 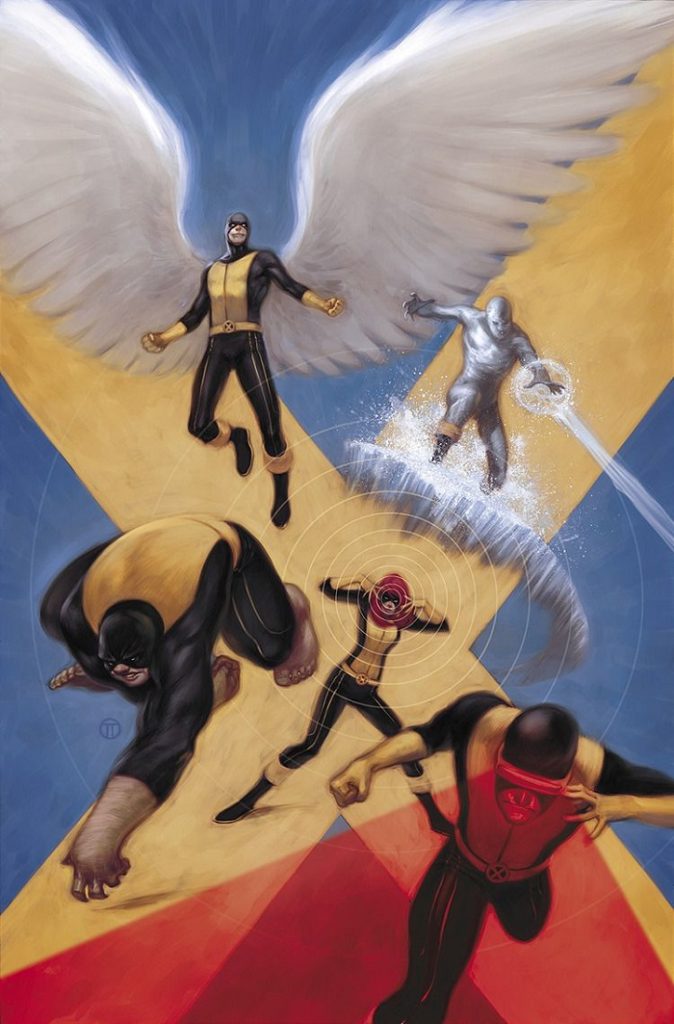 As part of the 2012 zeitgeist, Marvel also coincidentally releases a long-form graphic novel on the Original Five by Dennis ‘Hopeless’ Hallum and Jamie McKelvie. In retrospect, it works quite nicely as “further reading” for modern audiences looking for a more current adaptation and expansion of the classic 1960s Silver Age material.

Based on the strengths of his handling characters here, Hallum also proves worthy of writing a second volume of All-New X-Men after Bendis exits in 2015…

After AvX, mutants are re-populating. So, nooooww Cyclops is all about teaching kids instead of just making soldiers. Sure, he’s still a fugitive and Magneto’s still a reluctant consigliere, so the whole Brotherhood of Evil Mutants connotations might be a bit of a PR uphill fight but whatever- free teched-out cave lair in the Canadian woods! All this and more in this “other shoe” companion book of the Bendis-era.

Add points if you enjoy a whole lotta Chris Bachalo. 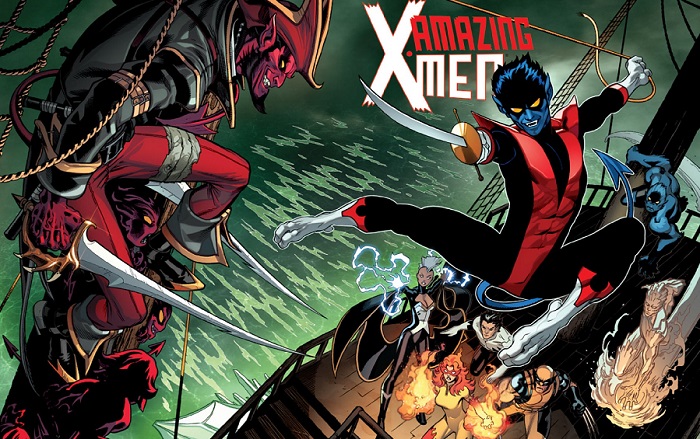 As Jason Aaron’s time on the X-books winds down, he branches out on a second title- one decidedly more tightly-focused adventure squad as opposed to the sprawling ensemble of WatXM. And what better to function as impetus of this adventure squad than to return to the X-Men their own swashbuckling heart and soul, Nightcrawler- deceased since 2010’s Second Coming 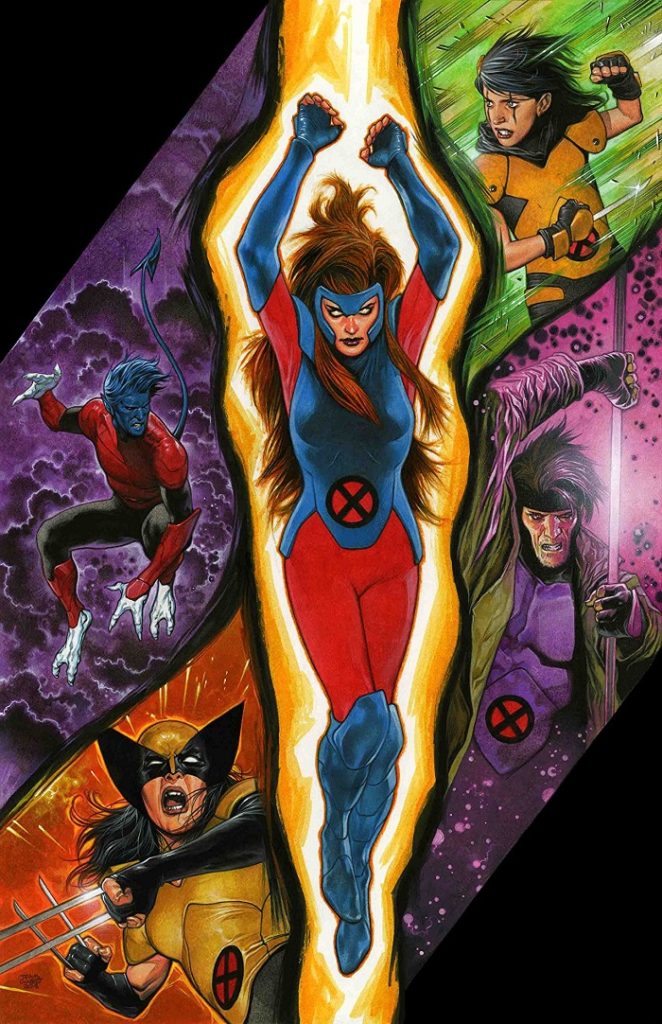 Bendis cross-pollinates his writing assignments as the Original Five travel to the Ultimate Universe and have an adventure with Miles Morales!

They also encounter the Ultimate X-Men (more multiple Iceman yelling) and Jimmy Hudson, the son of Ultimate Wolverine, who will go on to become the O5’s future teammate in Cullen Bunn’s X-Men: Blue series a few years removed from this story.

In late 2017, real-deal adult Jean Grey returns and it’s not before long that Morrison-era evil psychic entity, Cassandra Nova, forces Jean to assemble a little strike team less out of choice than survival and necessity.

, writer Tom Taylor moves to this poignant yet short-lived team title but not without taking clawtastic Laura Kinney and younger clone sister Gabby along.

Namor also briefly rejoins an X-team, so there’s that. But really, the biggest draw of this title is Nightcrawler’s beard.

That and a whole lot of timely talking points on love, hate, tolerance and acceptance. It’s not hitting you over the head with it but in our current societal climate, it’s pretty allegorically on the nose and rightly so.

Astonishing X-Men by Matt Rosenberg: Until Our Hearts Stop

In Summer 2018, Marvel begins to conclude the most recent volume of Astonishing with this arc by writer Matthew Rosenberg (Punisher, New Mutants: Dead Souls) and recurring X-artist, Greg Land. Essentially it’s a “losers get even”- type movie plot only starring Cyclops’ younger brother, Havok, as the disgraced ex-Avenger who can’t get gruff ol’ headmaster Kitty Pryde to sanction a team to investigate suspected anti-mutant government dealings.

So, instead of getting his own X-Force, Alex takes it upon himself to wrangle up the “B”-est squad he possibly can…

The whole “it’s not the team I want but this is the team I got and this is probably a one-way trip” schtick is also a scenario Rosenberg will once again revisit with even greater viscerality in a follow-up endeavor in the also-just-concluded Uncanny (collected as Wolverine and Cyclops Volumes 1 & 2).