.
You are here: Home / Featured / Should You Read Sean Howe’s Marvel Comics: The Untold Story?

For a readership obsessed with origin stories and continuity, it’s somewhat remarkable just how inarticulate the history of Marvel Comics can be. Show up to Marvel Comics in the 2000’s, and everything tells you this is the house that Stan Lee built. It doesn’t take much digging, though, to figure out there’s more to the tale than that.

Fortunately for the curious, author Sean Howe has put together a heavily detailed history titled Marvel Comics: The Untold Story.

Why the need for this “untold story” of Marvel? In his Comic Book Resource’s column earlier this millennium, comics legend Warren Ellis found himself answering this exact question while pontificating on Stan Lee and co’s superhuman Marvel output in the 60’s.

“I suspect there’s a book on those early days of Marvel that needs writing — it always seems to me to be the Old West of comics publishing, strange mad middle-aged men beating away at keys and boards deep into the night, being able to stand each other for just long enough to produce this prodigious, health-breaking amount of seminal work.”

To a large degree, that’s the book Howe has put together here. Of course, as a complete history, there’s much more to cover. Marvel Comics: The Untold Story is equal parts history of the comic book medium, origin of the Marvel superhero’s creation, and complete business history of one of the most prominent forces in American pop-culture for over 50 years.

Who Is This Book For?

This is actually a strangely difficult question because there winds up being more to the answer than “People who love Marvel Comics.”

There are a couple cases where Marvel readers might find Howe’s history off-putting.

There’s a pretty interesting read here from a long-time Marvel reader that argues (strongly) that this book is a disappointment to anyone who’s been with Marvel for a few decades.

As the writer, Bob Greenberger, says “…For those who grew up reading the comics, it is woefully short on analysis and perspective.”

Greenberger takes particular issue with Howe’s lengthy focus on 70’s era Marvel, at the expense of the early Merry Marvel bullpen days of Stan Lee and Jack Kirby. Although I don’t share this problem, I can see how Marvel Comics: The Untold Story might leave long-time fans wanting.

One of the only negative book reviews on Amazon simply complains that Howe killed their inner child with the insight into personal pettiness and jealousy that fuels so much of Marvel’s history.

This is, of course, mildly ridiculous, but I can kind of sympathize with the sentiment. It’s a lot more fun to simply enjoy the incredible starting run on Spider-Man from Stan Lee and Steve Ditko without knowing the writer and artist weren’t even on speaking terms by the end.

Of all the personalities in the book, Stan Lee probably comes across the worst. This is hardly shocking, but it is somewhat upsetting, even for a cynical, practical reader.

Personally, I grew up with Stan Lee greeting me as a true believer to start every Fanstastic Four cartoon. Even today, he seems like the coolest, nicest, most lovable old man in the universe. Just watch this clip of him testing out Marvel’s new Kinect game, Marvel Avengers: Battle for Earth.

And then you read Marvel Comics: The Untold Story and Stan the Man comes down to earth hard. Even casting aside his famous creator-rights issues with Jack Kirby (which is pretty hard to do; You can make a compelling case that Stan the Man has gotten a lot more credit than deserved), for much of the book Stan comes across as uninterested in comic books and very limiting in his editorial capacity. Writing for Stan Lee in the 70’s sounds about as creatively liberating as writing an edgy, subversive creative writing piece for Sarah Palin in a nunnery.

To his credit, Howe lets the interviews and research speak for itself. The writing style here is very informational, without personal injections, or really much flair or humor from the author (the humor is instead dryly inferred through the behavior and quotes of the individuals within Marvel).So it’s not as if Howe set out to make Marvel Comics: The Untold Story his own personal attack of Stan Lee. I have to imagine he entered the process of writing this book with the mindset that Stan isn’t quite the Man the media sees him as, but it’s not his fault the reality is disappointing.

“The problem with hero worship is that worshipped heroes are so frequently full of problems.”

End of the day, if you’d rather enjoy Marvel Comics for the great stories and art, without all the behind-the-scenes corporate drama, Marvel Comics: The Untold Story will mostly read as a tedious desecration of idols.

I Ask Again: Who Is This Book For?

To an extent this is about as mainstream accessible as a history of Marvel Comics book might ever be. But I’d hardly call it a casual read; Howe’s as likely to quickly reference Shang-Chi master of Kung-Fu as he is Steve Englehart.

With that in mind, my answer would be Marvel Comics: The Untold Story is for just about anyone with a strong-to-cursory interest in Marvel Comics, with a particular emphasis on newer readers.

As the aforementioned article addresses, if you grew up with Jim Shooter’s dark reign in the 80’s, you might not be all that appreciative of the analysis and perspective provided by Howe on this period. But for someone newer like myself, the historical oversight is fascinating. For example, I had no idea Secret Wars was basically a conduit for a line of toys, or even that it was so maligned within critical circles (I kind of liked it!).

The other obvious purpose for this book is any and all business research projects concerning Marvel Comics. This is a treasure trove of business information and management of a major publishing company. I have a feeling Marvel Comics: The Untold Story will find a nice home among university libraries for quite some time.

If you’re still unsure if this is the right gift idea for you, you can check out the complete gift guide below. Click on the chart for a closer look! 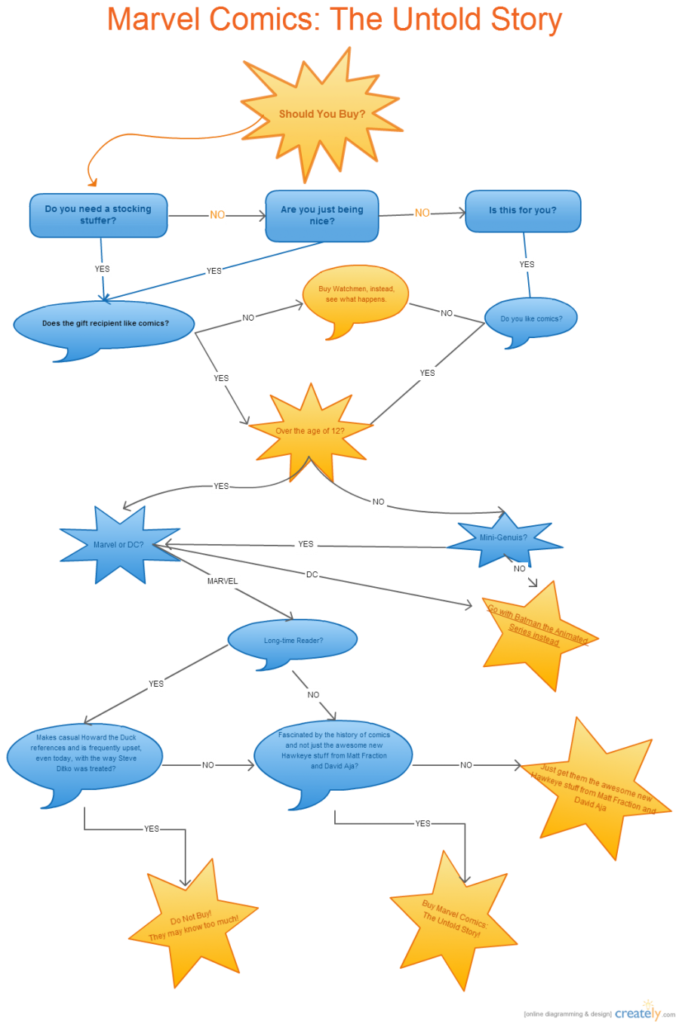 Is It Ok To Like Marvel Comics After Reading This?

Given the information inside this book – the corporate betrayals, and the creative injustices, and the custodial nature of the character caretakers – is it ok to like Marvel Comics? Does the reality ruin the fantasy?

While some readers might find their love of Marvel challenged by some of the unfortunate human behavior of its employees, for me it only reinforces how amazing the comic book medium really is.

Over the course of 52 years, a Chapter 11 bankruptcy, the Comics Code of America, endless business necessities superseding creative concerns, and Dazzler, Marvel Comics is thriving. Not only that – not only is Marvel in a better place creatively in 2012 than you might even believe (seriously, check out the Hawkeye or Captain Marvel ongoings), but writers and artists have created fantastic comic arcs that stand the test of time throughout all of this! Frank Miller’s Daredevil came with Jim Shooter’s Type-A demanding leadership. Jim Starlin’s cosmic, mind-of-the-gods Captain Marvel came with Stan Lee not wanting to push too many buttons. No matter the problems, great art still happened.

And as far as some of the more off-putting business influences on what is supposed to be a creative industry, you’ll find the exact same sort of personal, petty jealousies in a book like Those Guys Have All the Fun: Inside the World of ESPN. Business is business is business… no matter how entertaining the art and end result may be.

End of the Day

If you have even a cursory interest in the history of Marvel Comics, I have to recommend Howe’s Marvel Comics: The Untold Story. The book can drag at times, but it more than makes up for a slower pace with exhaustive research and fascinating information.

If you like business history and want to know more about how the world got everything from Spider-Man to Dr. Doom, I don’t see many better alternatives than Howe’s analysis.

If you’ve read the book already, or have questions about what’s inside, please feel free to share in the comments! And if you’ve found this review helpful, and would like to buy Marvel Comics: The Untold Story please click this link to support Comic Book Herald!

In addition to great history and information, Howe references a lot of ridiculous “I can’t believe that existed” Marvel lore. One of the craziest I found was the video embedded below. Just be warned that once you hit play, you won’t be able to turn away.

Spider-Man From Beyond the Grave “Rockcomic”