Non-traditional superhero comics can be daunting. Not only for the creators but for the audience as well. While there are no set rules, the undertaking usually demands a completely different set of aesthetics than when dealing with more conventional tales of capes and cowls. Although often just as intense, the actual tone struck is typically worlds removed with action focusing more on character-driven drama rather than spectacle and bombast. For the writer, it means not being able to hide behind pictorially-intensive action scenes. For the reader, it normally means reading a lot of talking head word balloons. Despite boasting an ensemble including not only our resident jade giantess but former Captain America, Steve Rogers, Hellcat, and Daredevil as well, it’s into the latter category that the latest issue of She-Hulk squarely falls. However, it is also amid the rigorous chattiness that writer Charles Soule shines.

Considering the writer’s own legal background, Soule is truly in his element, with dialogue resonating exactly as one would expect. Along with an obvious full command of vernacular and mindset, he also injects a good amount of humor into what could easily be rendered as much drier fare in lesser hands. Although still a relative newcomer to the House of Ideas, he handles the established character properties like a seasoned vet. His Daredevil comes off very similar to Mark Waid’s current version while Hellcat just exudes dangerous fun in her two-panel appearance. He even demonstrates that an old dog like flash-seniorified Captain Rogers can still show off some new tricks, throwing out a few unexpected twists and turns along the way. 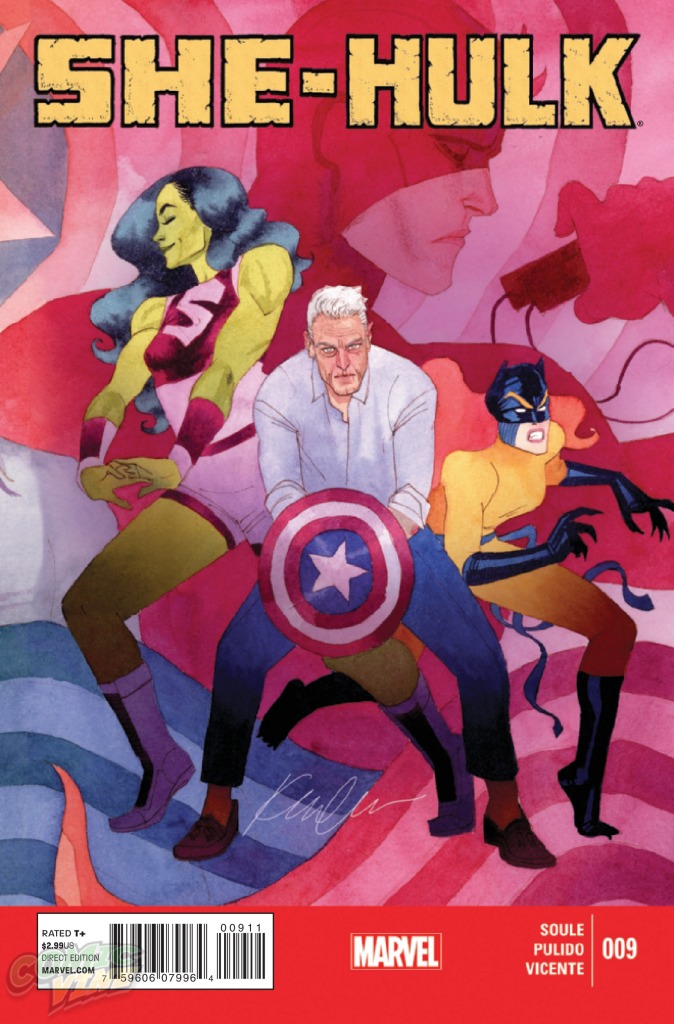 While the dialogue is smart and humorous, it’s not truly what makes this book fun or funny. That honor belongs to series artist Javier Pulido. Certainly not the flashiest creative on the block, Pulido is exceptionally skillful at articulating facial expressions and body gestures. In many respects, he is the go-to guy to execute this sort of protracted talkathon. However, just like Shulkie, he positively explodes when the scene changes to a multi-page montage of midnight rooftop-hopping. It’s a refreshing dynamic and really what was needed all around. The change-up also speaks volumes of the restraint Pulido must normally cultivate to execute such exacting minimalism in his regular linework.

The one thing that really makes the interior visuals connect, though, is the color, courtesy of color artist Muntsa Vicente. There is a literal and figurative pop sheen from cover to cover. The tones are heavily saturated and super-vibrant, leaping right off the page and ably assisting in keeping forward momentum strong. They also complement Pulido’s art fantastically, underscoring his “Steve Ditko channeling Jack Kirby” retro style and are certainly the crowning aspect of the aforementioned roof-hop sequence.

All of this being said, as the middle chapter of a three-parter, there’s not a terrible amount to hang one’s hat on beyond these individual achievements. On its own merits, it does offer some insight into a typical day for Jennifer Walters, PLLC but the story is far from self-contained. It’s a conceptually intriguing tale but definitely served better in its greater context and certainly worth re-examining in a larger collected format.

Musician and freelance web denizen Matt Lehn has been living and breathing the Marvel Universe since 1985. Always a die-hard New Yorker at heart, he now lives with his wife, three boys and two cats in Portland, Oregon.