Shang-Chi, the Master of Kung Fu, has been punching and kicking his way around the Marvel universe since 1973. Despite being a year older than the likes of Wolverine, he’s never really led an ongoing series (with his name on the cover). Well, if you’ve ever wondered what a Shang-Chi ongoing would look like, there’s a pilot of sorts: a propulsive miniseries by Gene Luen Yang (Dragon Hoops, Superman Smashes the Klan), Dike Ruan (Black Cat), and Philip Tan (Batman and Robin, Spawn). Shang-Chi shows us exactly what makes Marvel’s premiere martial arts hero stand out from the pack.

There are some characters who are so iconic, you can tell what they are all about with a passing glance. That’s not really the case with Shang-Chi. You get that he’s a martial arts guy, and you might notice a predisposition towards Bruce Lee in Enter the Dragon-style jumpsuits. But who does he fight? What does he want? What does his life look like when he’s taking a day off? Yang, Ruan, and Tan have strong answers for all those questions, and quickly make Shang-Chi’s world feel as lived in as Spider-Man’s. 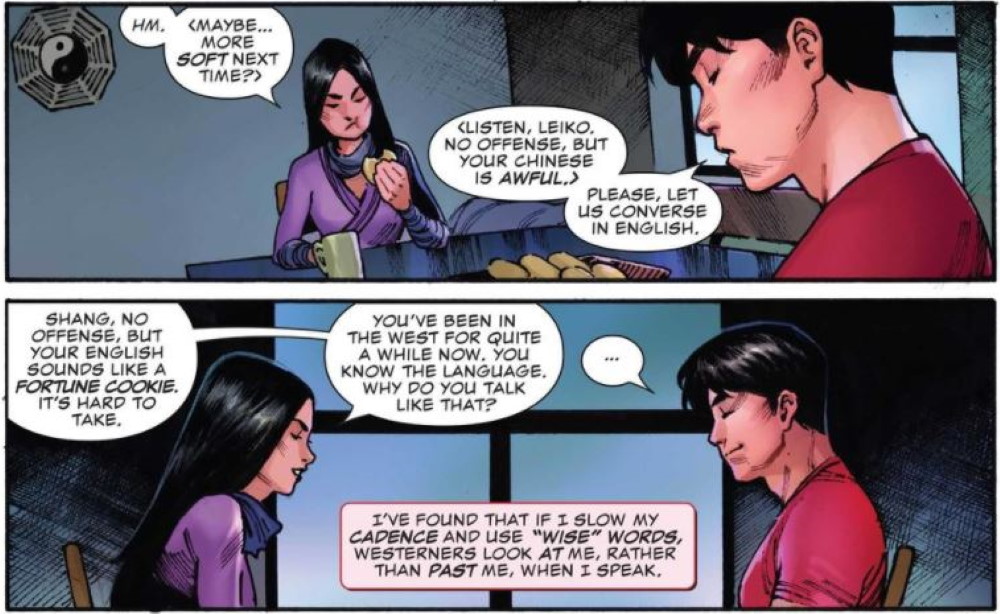 When we meet Shang-Chi in issue #1, he’s trying to lead a civilian life. He’s got an apartment and a job at a bakery (which he scored by stopping the place from getting robbed). From our first moments with the martial arts master, it’s clear he doesn’t quite fit in. Some of that is conveyed through Yang’s writing: Shang-Chi feels kind of awkward and out of place, maybe overly formal. But a lot of the heavy lifting is done by the art team.

Ruan and Tan don’t stuff every panel with detail, but their faces are emotive, often obscured by scratchy shadows that evoke a sense of mystery. Most of the time, Shang-Chi is looking down at the floor, or closing his eyes to concentrate. The bakery gig seems like a lot of effort for him. Later, when fists and feet are getting thrown, Shang-Chi raises his head. His eyes light up. But working a day job, he seems kind of shy and hapless.

But then we meet Leiko Wu, who introduces us to another important part of Shang-Chi’s world. Turns out that on top of everything else, the dude’s a suave superspy. Not only does this help keep the story moving along, it’s also a great way to establish the different kinds of adventures our hero can go on. Yang also takes the opportunity to bring a bit of himself into the book. Leiko and Shang-Chi talk about Chinese recipes and get into some of the nuance of code-switching. Leiko tells Shang that his English “sounds like a fortune cookie,” a stereotype Shang-Chi is intentionally filling to compel Westerners to pay him mind. And then everything gets interrupted by armed goons.

This is why putting Gene Luen Yang on Shang-Chi is such a no-brainer. The specificity that Yang brings to the table makes Shang easier to relate to. A lesser writer might have been overly concerned with giving Shang-Chi a “broader appeal” to make him more “universally accessible.” But that approach only ever serves to flatten a character. I don’t think I’ve ever eaten a crystal cake, but I definitely know what it’s like to botch a family recipe. Yang’s version of Shang-Chi feels like a real three-dimensional person. But Yang’s no slouch at superhero action, and he manages to punctuate the good character work with fisticuffs, which Tan and Ruan imbue with whirlwind energy. 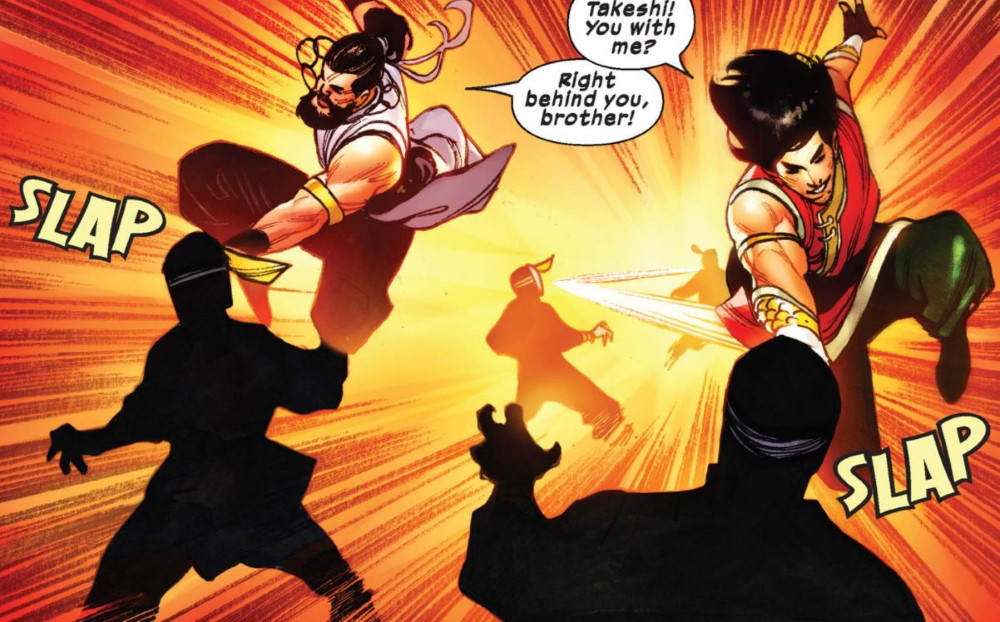 While all of this is happening, the story cuts back and forth from our antagonists: the Five Weapons Society. This is the final piece of the Shang-Chi puzzle. The reason our hero is like this—well, his origin story—is that he was raised by a mystical cult. That opens the story up to all sorts of mythical magic. By the end of the miniseries, Shang-Chi will have faced (and allied himself) with the spirits of the dead, and he will battle vampiric Jiangshi. Together, these are the ingredients that make up a Shang-Chi story. He’s a nice guy trying to live a normal life, but his past as a secret agent and his connections to magical cults keep dragging him back into being a superhero.

The cult also gives Shang something that every Marvel hero needs: a dysfunctional family. Shang-Chi takes us into five different secret sects of the Five Weapons Society, each of which is headed by one of Shang-Chi’s half-siblings. Yang does a masterful job at establishing each of their characters and getting you to care. This kind of additive storytelling gives us years of potential stories. I’d love Shang to team up for further adventures with the boisterous Brother Sabre or the caustic Sister Dagger.

The tension between these three parts of Shang-Chi’s life is at the core of the miniseries. There’s a lot of fun superhero shenanigans to be found. It wouldn’t be much of a Shang-Chi comic if no one got kicked, and the story finds time for fights with vampires, assassins, and ghosts. But a good superhero story doesn’t necessarily revolve around who needs to get fought—that’s often just a lot of stuff happening. The best Big Two series find time for all of that, but are arranged around a central theme. Shang-Chi is all about fitting in.

Everyone has different expectations for Shang! His family wants him to lead the Five Weapons Society, a role he was born and raised to do but has been avoiding since ’73. The British government wants him to run black ops for them. And he just wants to learn to cook. Maybe be able to afford an apartment. Take a cutie to dinner and a movie. And every time he gets a groove going in one of these lives, someone shows up to tell him that actually, he should be doing something else.

And like, no kidding. It’s impossible to go on living while you are being torn in every direction, and yet everyone does it. The effort is superheroic, but real people don’t have superpowers. Then again, neither does Shang-Chi. He possesses great focus, discipline, and effort, but he wasn’t imbued with a dragon heart, or special radiation, or superior genes. Someone may question why his traumatic past made him into such a cool, nice guy, but in this miniseries it feels like the most natural thing in the world for him to be. Of course he’s like this. Not because he’s extraordinary, but because he’s just like everyone else.

The Heart of the Matter

I’ll give a lot of credit to Gene Luen Yang, but I also need to throw respect to the art team. Yang has a knack for turning larger-than-life heroes into people you’d want to hang out with. Just check out Superman Smashes the Klan

and ask yourself why there have been three Snyder flicks with Superman but none based on that charming little comic. (Just don’t ask me, because I could not tell you.)

But Ruan and Tan have an enormous task here. They need to balance a crazy tone, one that includes mythic beasts and slinky ladies with machine guns and awkward sibling reunions. It’s the classic thing where you need to believe that someone is fearless when faced with a dragon, but awkward at the thought of hugging their sister. The art style isn’t what I’d call subtle, but it finds time for quiet moments of emotional dissonance. Shang will tell you he’s calm, but the art will tell you that really, he’s sad. Some of that may have been the result of a good script, but ultimately the art finds room to breathe and tell a story of its own.

When a new superhero movie is coming out, the publisher wants to have a good comic to point at, something definitive that tells new readers what a character is all about. In that, Shang-Chi is a resounding success. In five issues, the team takes a character who has remained solidly in the background of the Marvel universe and shows what things would look like if he was the star. Rarely does a series work out so well. Go back and look at the efforts that Marvel published to coincide with a Thor movie or an Iron Man for examples.

Shang-Chi has all the ghosts and assassins you could want out of an adventure comic. It’s also got good characterization, and an instantly endearing supporting cast. It’s got artists who can draw all the power of the world’s strongest kick, and the quiet relief of an awkward dude sipping tea. As an intro to the character, Shang-Chi is admirable. But even more impressive is what a breath of fresh air it is for longtime Marvel readers who have always wanted to see the character thrive.