You are here: Home / Reviews / Marvel Reviews / What Does it Sound Like When an Empire Crashes? The Uncanny X-Men Find Out

In today’s Marvel Review, Comic Book Herald takes a look at the Uncanny X-Men: Rise and Fall of the Shi’Ar Empire. Is this really the end of the Shi’Ar? Should we even care about one of Marvel’s longest running space civilizations? Does Ed Brubaker own the Uncanny X-Men the same way he did Iron Fist and Captain America? What’s up with powerless Professor X? And just how much X-Men will you have needed to read before this arc makes any sense? Find out after the jump! 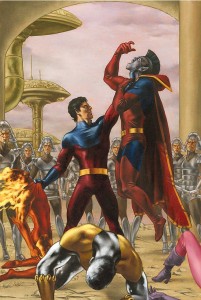 Who Needs It?: Deep lovers of all things X-Men and Marvel in space. Anybody who read Brubaker’s X-Men: Deadly Genesis. Readers who like watching Gladiator switch sides like Anakin.

You Can’t Get On My Level. You Gonna Need a Space Shuttle or a Ladder That’s Forever!

To be direct: The coolest thing about Uncanny X-Men: Rise and Fall of the Shi’Ar Empire is the name and concept. I’m a sucker for fleshed out Marvel civilizations (just ask Namor), and the idea of treating the Shi’Ar Empire like Rome is fantastic. Writer Ed Brubker has proven time and time again with Captain America and Iron Fist (not to mention his creator-owned Criminal, one of the better comics I’ve read in the last year) that he can brainstorm with the best of ’em. And the execution of the work is usually there to back up the concept.

Rise and Fall of the Shi’Ar Empire is simply a really cool idea with a painfully middling end result. In the wake of Brubaker’s own X-Men: Deadly Genesis (another outstanding concept that I won’t ruin here), we have Vulcan on a collision course with the Shi’Ar Empire, ready to tear the whole thing limb from limb.

Vulcan? That’s right – this entire story arc is highly reliant on his backstory in Deadly Genesis. As in, you better read that if you want to have any chance of following Rise and Fall. Brubaker wastes no time jumping right into X-Men lore here, and although that can be a far more enjoyable read if your’e caught up, it presents a challenge for those who are not.

Brubaker also makes quick, lightning-fast references to Grant Morrison’s run on the New X-Men, Chris Claremont’s iconic introduction of the Shi’Ar and the phoenix force in Uncanny X-Men, and the impact of Brian Michael Bendis’s House of M on Professor Charles Xavier.

Can you read Rise and Fall without all this background knowledge. As with any story, I’m sure you could. Personally, I don’t enjoy stories that allude to details foreign to me; hence Comic Book Herald, a site dedicated to the complete reading order of these stories. And Rise and Fall does not waste time explaining what you might be missing. Fortunately for you, I do.

So Destroy All Copies With a Phoenix Blade?

I wouldn’t go that far. Although I’m not crazy about this story arc, it does contain some major Marvel continuity updates. For example, Professor Xavier’s little problem revealed at the end of X-Men: Deadly Genesis? Well that finds a completely implausible and frustratingly forced conclusion. Likewise, for those of you who enjoy reading Uncanny X-Men as one of your primary lines, this arc presents major implications for the X-team available.

Perhaps even bigger still, the huge Civil Shi’Ar that takes place will impact the ensuing Marvel Galaxy lines. Since many of these are particularly cool, it can’t hurt to know the state of the Shi’Ar Empire.

End of the day, though, Rise and Fall of the Shi’Ar Empire just isn’t that thoughtful of a read. It’s good, banal X-fun intended for longtime fans of Marvel’s mutants. I’m more interested in what the changes will mean for the X-Men and Marvel Universe moving forward. Check this one out on Marvel digital comics or find a cheap used copy.