The Eisners are the most well known awards in the comic book industries, selecting the best of comics since 1988, and named in honor of all time great cartoonist Will Eisner. Like all awards ceremonies, they share the trappings of imperfect systems, but winning an Eisner is clearly reason to celebrate for comic book creators and those in the industry.

After seeing a handful of creators and comics-industry folks sharing requests to vote for their work, I was surprised at the apparent openness of voting, like the Eisners were decided ala the NBA All-Star game fan vote. So, naturally, I registered to vote as a “journalist” (“obsessed, aging blogger” is more realistic, but way less impressive sounding), and was delighted to find I could vote!

It wasn’t until after I voted, that I read the FAQ page and realized Press and Fans are not eligible. Which makes sense!

So with that in mind, I still wanted to share my 2020 Eisner votes and some thoughts on the selected works.

I did not vote for any categories where I hadn’t read any of the entries, and avoided write-in votes simply because 1) I wasn’t certain about the applicable timeframe and 2) for my first time voting kind of wanted to play within the nominations. If I had written in picks, they would have been for Gene Luen Yang as writer, and Ice Cream Man

The deadline for voting was June 18, 2020, although recently I’ve seen Chris Arrant report on Newsarama that the voting is under review following problems with the website! I look forward to hearing the announced winners once those problems are sorted out!

A. “Hot Comb,” by Ebony Flowers, in Hot Comb (Drawn & Quarterly)
B. “How to Draw a Horse,” by Emma Hunsinger, The New Yorker, https://www.newyorker.com/humor/daily-shouts/how-to-draw-a-horse
C. “The Menopause,” by Mira Jacob, The Believer, https://believermag.com/the-menopause/
D. “Who Gets Called an ‘Unfit’ Mother?” by Miriam Libicki, The Nib, https://thenib.com/who-gets-called-an-unfit-mother/
E. “You’re Not Going to Believe What I’m About to Tell You,” by Matthew Inman, The Oatmeal, https://theoatmeal.com/comics/believe

is an excellent work of short fiction, both insightful in its depictions of growing up as a young African-American woman, and heartbreaking in its depictions of assimilating to social pressure and cultural influences. The story is about a black girl’s hair, but the conflict is so much larger.

A. Coin-Op No. 8: Infatuation, by Peter and Maria Hoey (Coin-Op Books)
B. The Freak, by Matt Lesniewski (AdHouse)
C. Minotäar, by Lissa Treiman (Shortbox)
D. Our Favorite Thing Is My Favorite Thing Is Monsters, by Emil Ferris (Fantagraphics)
E. Sobek, by James Stokoe (Shortbox)

is one of my favorite comics of all time, and this FCBD 2019 special is just as deserving of all the accolades the Eisners can throw at the work. 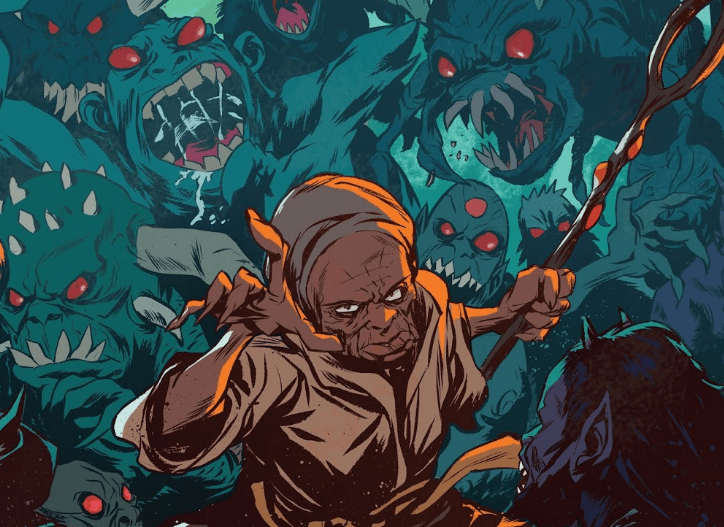 Admittedly, this was a tough one, and if I hadn’t been in the process of re-reading Bitter Root

to prepare for my interview with Sanford Greene, I could easily have picked Criminal or Immortal Hulk. Ultimately, Bitter Root’s incredible ability to turn the fight against racism (and all that entails) into a steampunk Harlem Renaissance fantasy story is more impressive, and more important than the competition.

Sentient is very good, but it ain’t Little Bird

. This was CBH writer supreme John Galati’s single favorite work of 2019, and who am I to argue?

Another surprisingly easy pick among a bunch of work I enjoy. Gillen’s story of a zombiefied King Arther revival is ready-made for the big screen, but it’s Dan Mora’s absolutely stunning craft and design that elevates Once & Future to Eisner winning level.

New Kid by Jerry Craft is that impossibly challenging all ages blend of school humor and heartbreak, with the added complex layer of racial bias in middle and high school. The “For Kids” designation of the award is frankly deceiving here, as Craft’s work is well worth a read for comics fans across a wide variety of ages.

When SKTCHD ran a giveaway to support local comic shops during the pandemic, the near unanimous praise for Laura Dean Keeps Breaking Up With Me made it the very first graphic novel I thought of. The work by Mariko Tamaki and Rosemary Valero-O’Connell is worth every iota of praise and then some, and a clear Eisner winning work.

They Called Us Enemy

packs the unflinching historical reality of March, this time addressing the life of Star Trek actor George Takei, and his childhood spent in America’s concentration camps for Japanese during and after World War II.

is one of those comics that absolutely blew me out of the water, to the point that I read it all in a single sitting and immediately rushed to rank it inside my top 100 favorite comics of all time.

If movies about Hollywood are Oscar-bait, then I don’t see how Brubaker and Phillips tail of comic cons and creators scorned could fail to come away with an Eisner. The return of Criminal was easily one of my favorite comics of 2019, and the “Bad Weekend” saga ranks among the best of the series’ incredible legacy.

The best writer Eisner is a tricky one, and as I’ve already laid out, my personal picks are most likely to revolve around Jonathan Hickman, Gene Luen Yang, W. Maxwell Prince, and Jeff Lemire. I’m a huge fan of the work Chip Zdarsky and G. Willow Wilson do on a regular basis, and I have to admit, prior to the past year, would never have guessed I’d be voting for Mariko Tamaki. I was introduced to the author through her Marvel work, and She-Hulk and X-23 ranged from mediocre to occasionally interesting, but nothing that blew me away. Tamaki has since blown the doors off these impressions with both Harley Quinn: Breaking Glass and Laura Dean Keeps Breaking Up With Me standing out as the most impressive resume of anyone among the nominees. 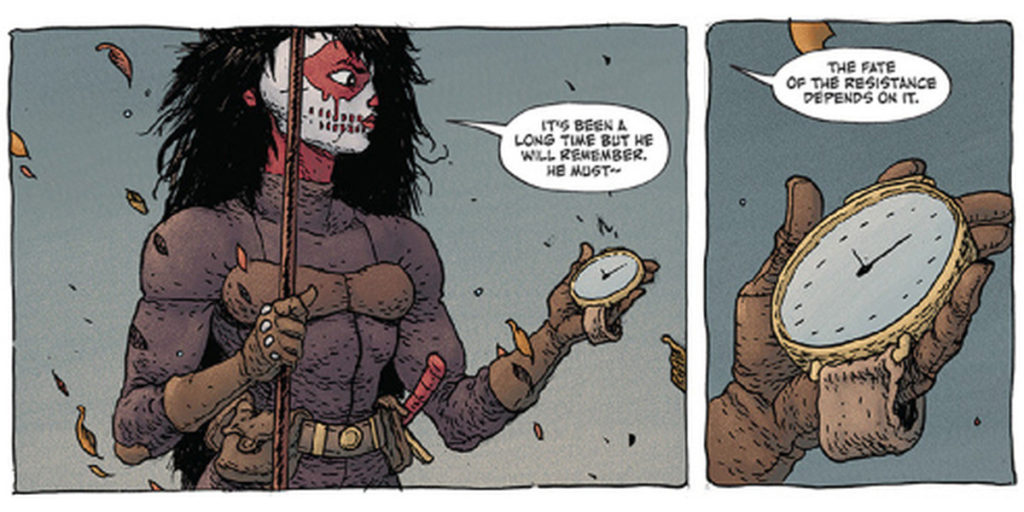 Bertram announced himself as next-level GREAT throughout all of Little Bird to the point that it won’t be any kind of surprise when Marvel begs him to come work on Hulk when Immortal Hulk wraps up. Evely is extremely deserving as well (true of everyone here, of course), but Bertram stood out to me as a shockingly great talent.

I’ve definitely been all-in on the work of Christian Ward since ogling his interiors on Marvel’s Black Bolt, and both Machine Gun Wizards and Invisible Kingdom are contenders for my favorite works of 2020 in no small part due to his remarkable artistic talents (the fact that he also writes Machine Gun Wizards is just icing on the cake).

Hollingsworth’s work with Ian Bertram on Little Bird cements the nomination to my mind. Hollingsworth has also shared some process videos lately on the upcoming Precious Metal which provide some insight into how the coloring comes to be.

There’s a temptation to just give Stan Sakai an Eisner for any category he’s nominated in – the Usagi Yojimbo revival is great – but just look at Deron Bennett’s body of work! Martian Manhunter and Assassin Nation are the works that stand out the most to me, with visionary artistic approaches to very different tonal universes, and Bennett lettering each to perfection.

Weird that the committee forgot about Comic Book Herald (or, more earnestly, PanelxPanel), but my vote has to go to the only work here that I read with any regularity! Women Write About Comics frequently has some of the best criticism, opinion, and perspective in comics, and is well worth adding to your regular comics media consumption.