It’s my 32nd birthday this week, so I thought it would be a fun relaxing birthday game to write reviews of my favorite 32nd issues of all time.

The rules here are the issue has to be exactly #32 (not the 32nd issue in a creator’s run or something), and that’s literally it! I’m also looking for particularly meaningful stories contained in this otherwise random number, especially if they stand out on their own terms, not just part of some great larger runs (although in all cases, they’re also that!). Some honorable mentions include Captain Marvel #32, Web of Spider-Man #32 (which is probably the best pick of the bunch, but I didn’t think of it, a reader on Facebook nominated!), and Gotham Knights #32.

My top four picks are: 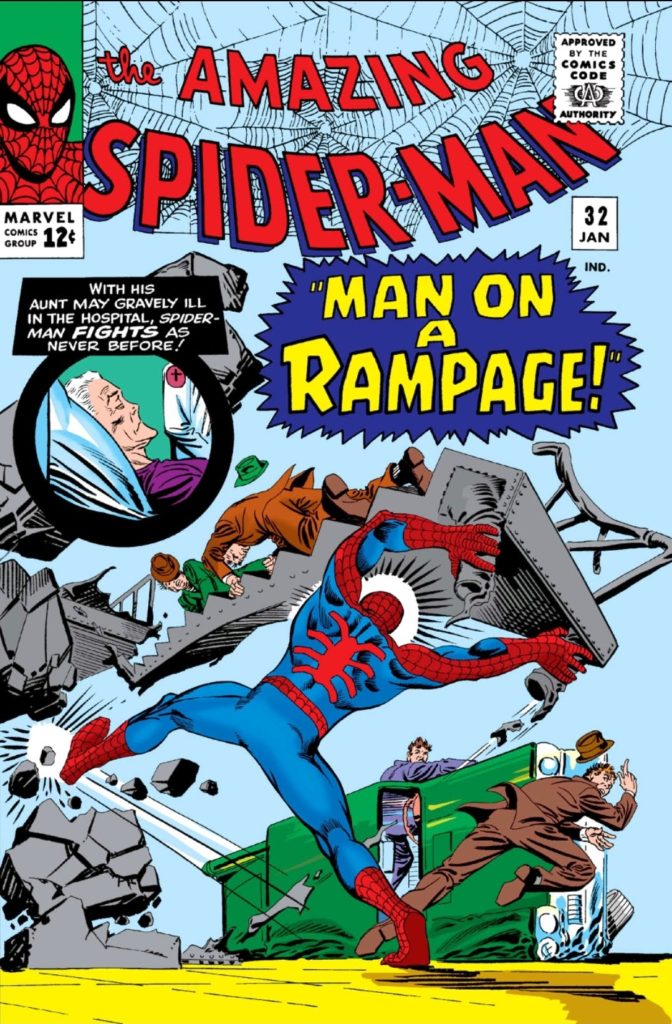 My favorite Silver Age superhero series, without really any question, is the first 102 issues of Amazing Spider-Man. It’s also just straight up my 10th favorite comic of all time. Throughout the excellence, the peak is a three issue stretch from AMS #31 to #33, with a story now summarized as “If This Be My Destiny” by Stan Lee and Steve Ditko.

“Man on a Rampage” often gets lost in the shuffle since it’s neither the first appearances of Harry Osborn and Gwen Stacy (that’s #31) or the iconic Spider-Man lifting something impossibly heavy scene from issue #33. It’s the nonetheless a crucial entry in the continuing story arc, and the first issue that came to mind for a favorite #32!

The entire success of “If This Be My Destiny” is fascinating considering Ditko’s accounts that he’d been plotting and drawing Amazing Spider-Man since issue #26, leaving scripting duties to Stan Lee (for his part, Stanly the Manly has occasionally obfuscated those details implying he and Steve collaborated on such moments as the Spidey lifting scene). Even more amazing, is the fact that Stan and Steve’s relationship had so deteriorated at this point that they weren’t even speaking to each other during the story’s creation!

The premise of “Man on a Rampage” is simple enough, opening with the reveal of last issue’s mystery Master Planner as none other than the 1A Spidey arch-villain Doctor Octopus. The influence this story had on my all time favorite animated comic book TV series, Spectacular Spider-Man 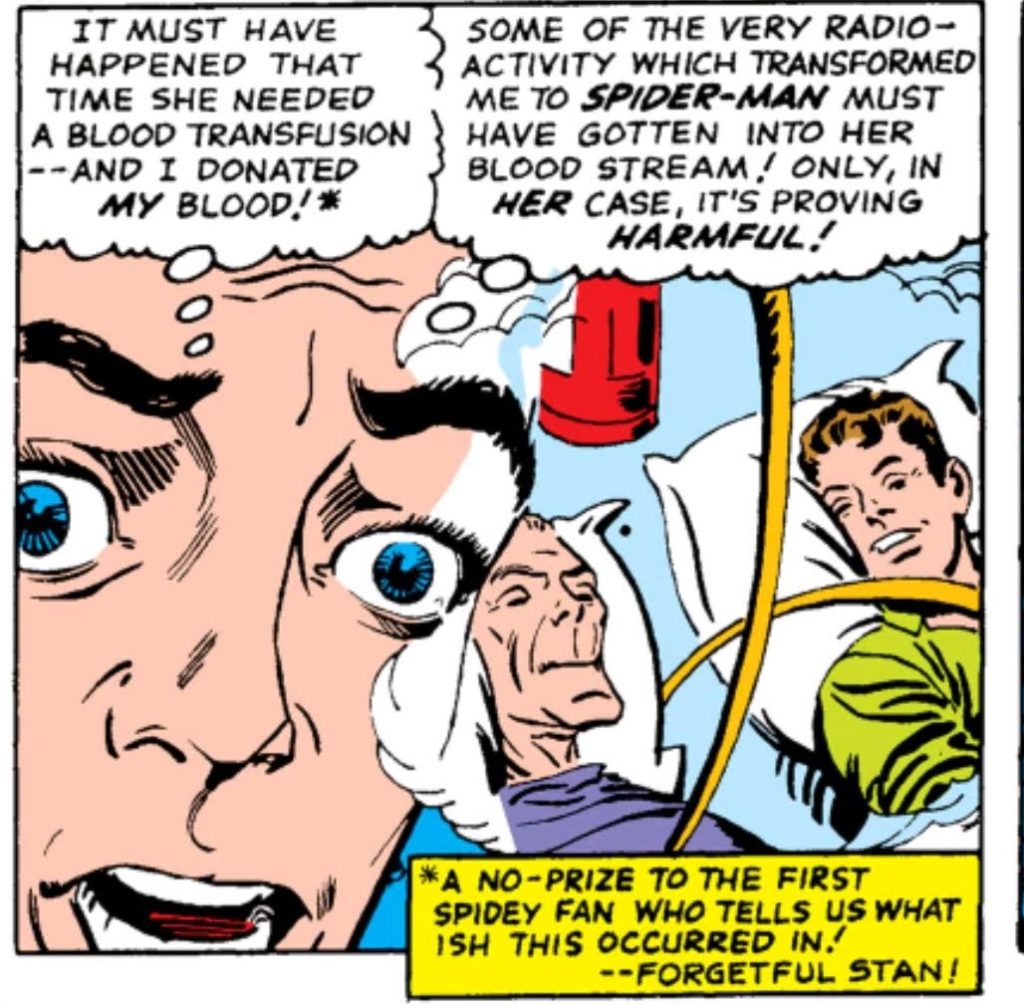 The major drama in Peter’s life is the near-death illness of Aunt May (a Spidey trope as old as the perpetually ancient Aunt herself). The twist this go is a Doctor’s claim that an unexpected trace of radioactivity in May’s blood is causing her ailment, which Peter immediately recognizes as an unintended side effect of his blood donation to Aunt May. (Bonus points for any time Stan writes a caption to the effect of “I don’t have time to run through the back issues and track this continuity, just tell us in the letters!”)

This is a perfect Spider-Man set-up because 1) Someone he loves is in danger and 2) Pete has reason to believe it’s his fault. It’s also 6 billion times better than the other most famous radioactive transmission Spider-Man gave to a loved one (see also: The time Spidey’s radioactive sperm gave Mary Jane cancer).

With his guilt complex in overdrive, Spidey loops in Doctor Connors (in a nice callback to his debut as the Lizard in Amazing Spider-Man #6), they identify the need for ISO-36 to develop a cure  (in a weirdly Contest of Champions / Marvel mobile video games related pull!), and Doc Ock promptly steals the isotope for his own underwater radioactive experiments.

Enter: A Spider-Man on a rampage! 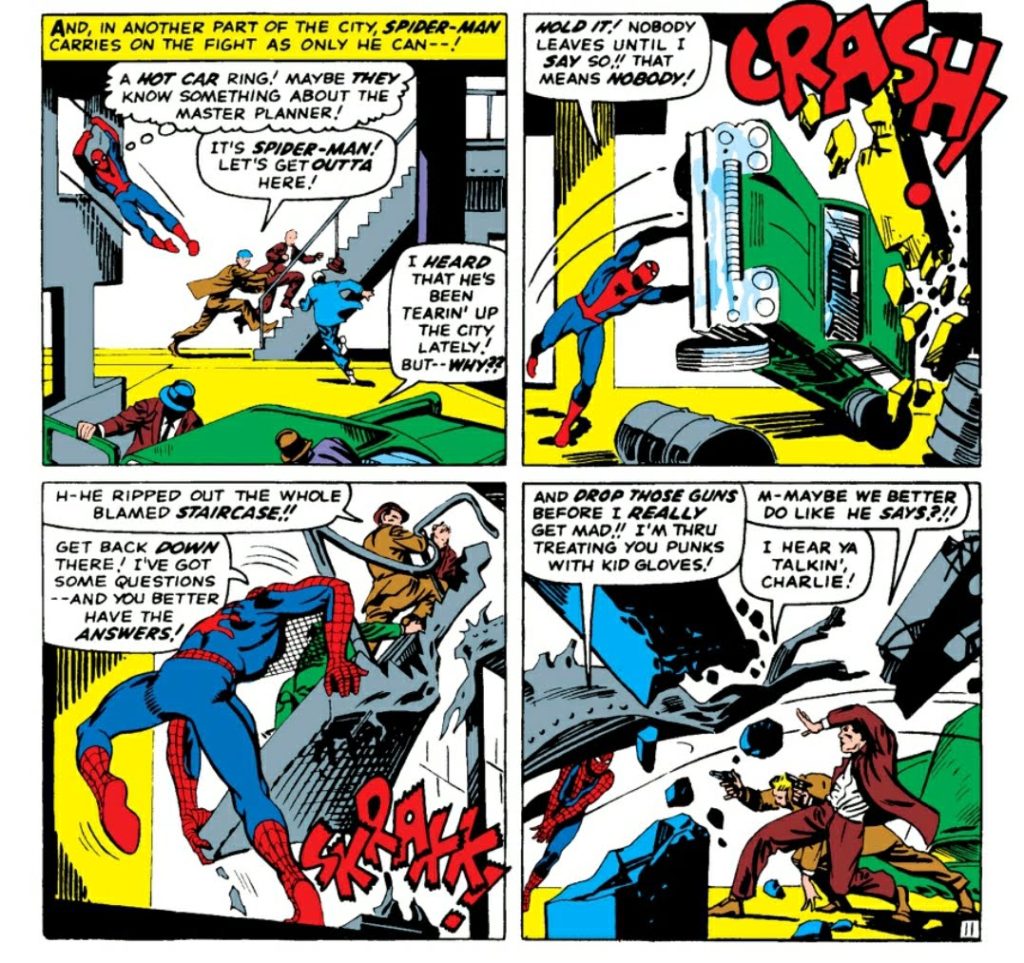 Sadly, this doesn’t mean Spidey climbs walls and smashes buildings ala Arcade rampage, but it does mean he does his best Action Comics #1 impersonation, chucking a car into a pillar and generally scaring the bejeesus out of the underworld’s finest. Despite their apparent complete lack of communication, Stan and Steve’s story is perfectly in sync, selling Spider-Man’s rage and the shift in personality, completely devoid of wise-cracking quips as he literally tears building’s apart to find information about the Master Planner.

We don’t often see Spider-Man quite this angry, turning his guilt and fear into rage. Moments like the aforementioned Web of Spider-Man #32 or the J. Michael Straczynski written “Back in Black

” arc of Amazing come to mind. Spidey’s so enraged throughout this issue that by the time he gets to Doctor Octopus – again, the Spidey villain of the Silver Age to this point – the betentacled one is completely overwhelmed, remarking “There’s no way to fight him – no way to stop him! He’s like a raging human dreadnaught!! I’ve got to escape!”

Honestly, the sequence their “battle” most brings to mind is Superman “taking the kids glove off” for Darkseid (in Justice League Unlimited). When Spider-Man truly unleashes his abilities, Doc Ock doesn’t stand a chance!

The issue ends setting the stage for Amazing Spider-Man #33, with Spider-Man trapped underneath the weight of impossible odds in a rapidly flooding base. He’s so exhausted from his rampage that he can’t budget the weight an inch anymore, he just needs some rest.

We know it’s not a luxury he’ll grant himself because that’s the thing about Spider-Man: “You always do the right thing, even when it makes your life harder” (I’m paraphrasing a line from Superior Spider-Man

). At the end of Amazing Spider-Man #32, though, we get a glimpse into that weakness he won’t allow to win the day. It makes the triumph that much greater.