You know how Dragon Ball is ostensibly about Goku, a lovably stupid monkey man and hilariously flawed father, getting into fun fights for our enjoyment but occasionally the narrative goes out of its way to keenly remind you that everyone on Goku’s planet died and he’s the last line of Earth’s defense against legitimate cosmic horrors?

, following fighty former basketball player Nash “The Knife” Gliven, Jr. locked in a court-based duel to the death with Dracula is a raunchy, bombastic riff on that.

If that barebones premise appeals to you, you will find Old Head both laugh out loud hilarious and surprisingly earnest, Stark’s story of an immensely gifted but emotionally troubled former star trying to do right by his family for the first time is a touching affair kept light by the sheer density its visual and dialogic gags. 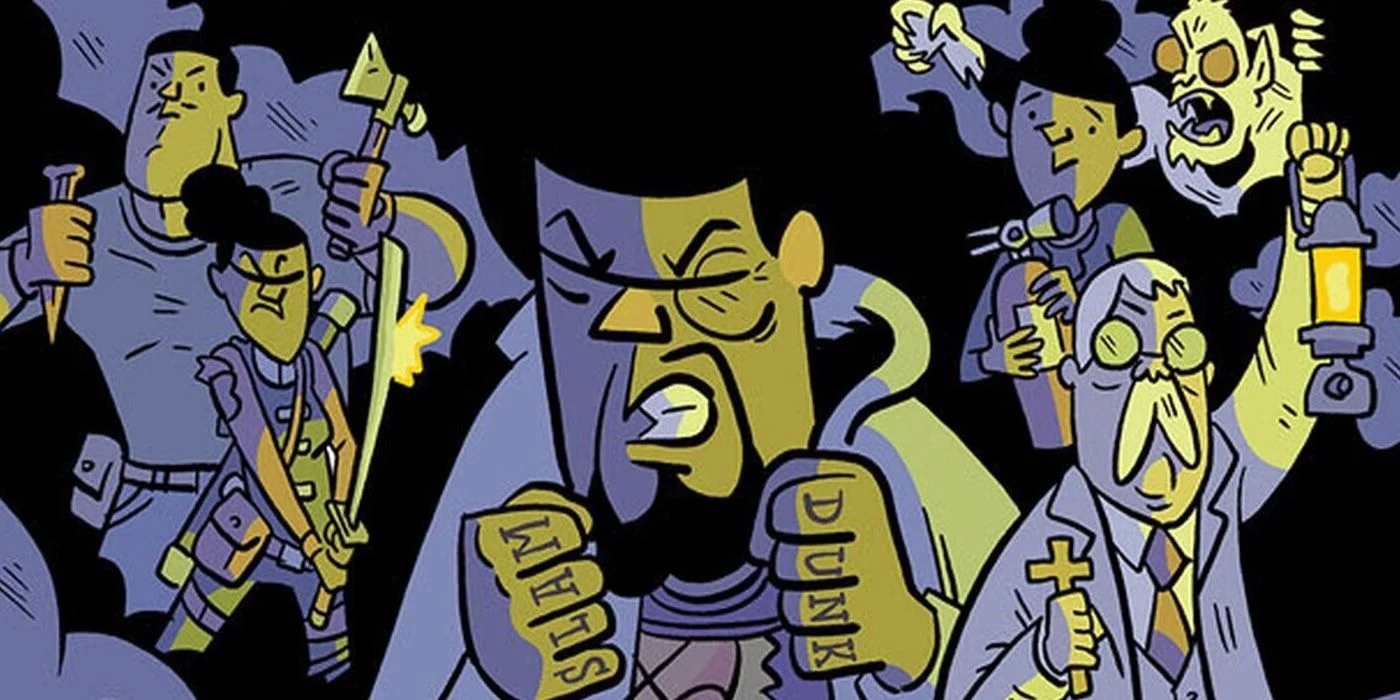 If it doesn’t, however, you might find Old Head’s more narratively obtuse and surprisingly offensive bits too much to power through, and I would not blame you. It’s a singular note story of compromises that ultimately work, but not without notable detractions that at times feel entirely surmountable by a creative team that would do just a bit better to not be lost in their surreally silly logic of their own world.

It’s hard to deny what Starks does right here, charitably complex characterization and comedy kept in a delicate balance. Gliven is a likeable protagonist, seen in an early book montage as a kid and later adult (Old Head, after all) who likes basketball but loves fighting, mostly finding excuses to get into scraps on the court that he, inevitably, wins.

He’s a recognizable winner with a realistic sour streak that you would almost rather see just mopping fools on the court, but for Starks’ keen purposes, he’s also currently a flawed dad trying to reconnect and express his (surprisingly) complicated place in the world with his pre-teen daughter, Willie. On a trip to his recently deceased mother’s home to sign away the land to the owner of the creepy castle on the hill, a castle very clearly owned, occupied, and operated by Dracula despite Gliven’s inability to catch on, both he and his daughter come to reconnect through a fast-paced mix of humor, horror, and honesty. Properly investigated, you’ll find there’s a lot of heart there!

But the book never feels too heavy nor sanctimonious due to its healthy mostly cute comedic concoctions. There’s a recurring gag about a surprisingly polite but nevertheless gross little guy literally named “Lil’ Menopause” not knowing when to butt out of conversations, a series of shots at people missing light switches accompanied by appropriate “Beef”, “Boof” and “Boop” sound effects, and a genuinely great bit about Dracula demanding a theatric entrance all delivered in a cartoonish marriage of visual and narrative levity that keeps a book effectively about parental death from feeling too dour.

In fact, the book’s entire narrative arc is both pleasantly complex and yet played straightforward, taking us on a surrealist journey through past and present to not only explore complicated family dynamics — Gliven’s mom has quietly replaced her museum walls of vampire-killing tools with celebrations of his sports life for example — but also to deliver on jokes set up on the literal first page to the very last.

Starks knows what he’s doing, keeping the emotional heart intact but not draining too much blood too quickly, and accompanied by Schweizer’s scene-setting, with well-organized and contextually prompted pop art-like colors (the glowing, sunset red that follows Dracula is especially inspired), the story moves through the paces quickly — a 120 something pages read in a 20-minute max session.

The payoff, a mix of rekindled appreciation between Gliven and his daughter, and a revealing one for his parents, is no less rewarding just because it’s more funny than serious, finding a surprisingly neat narrative through-line from basketball and dunking dorks — yes there is a late-game basketball-laden beatdown — to expressing grief.

Nevertheless, it’s impossible to deny that sometimes that humor is more harmful than it is harmonious. Early on, for example, Gliven is introduced to Dracula’s posse in a deeply gross-feeling scene, finding them all looking at uh, adult videos together before one of them, named Playboy, is dispatched to capture Gliven’s 12-year-old daughter for Dracula’s torture. Propelled through their Home Alone-esque encounter with risqué jokes, the confrontation between Playboy and Willie ends up feeling a lot more harrowing than it is played as. This isn’t helped by grating jokes like insipid repeated recalls to the antagonists turning into “dickhead monsters” for no rhyme or reason. 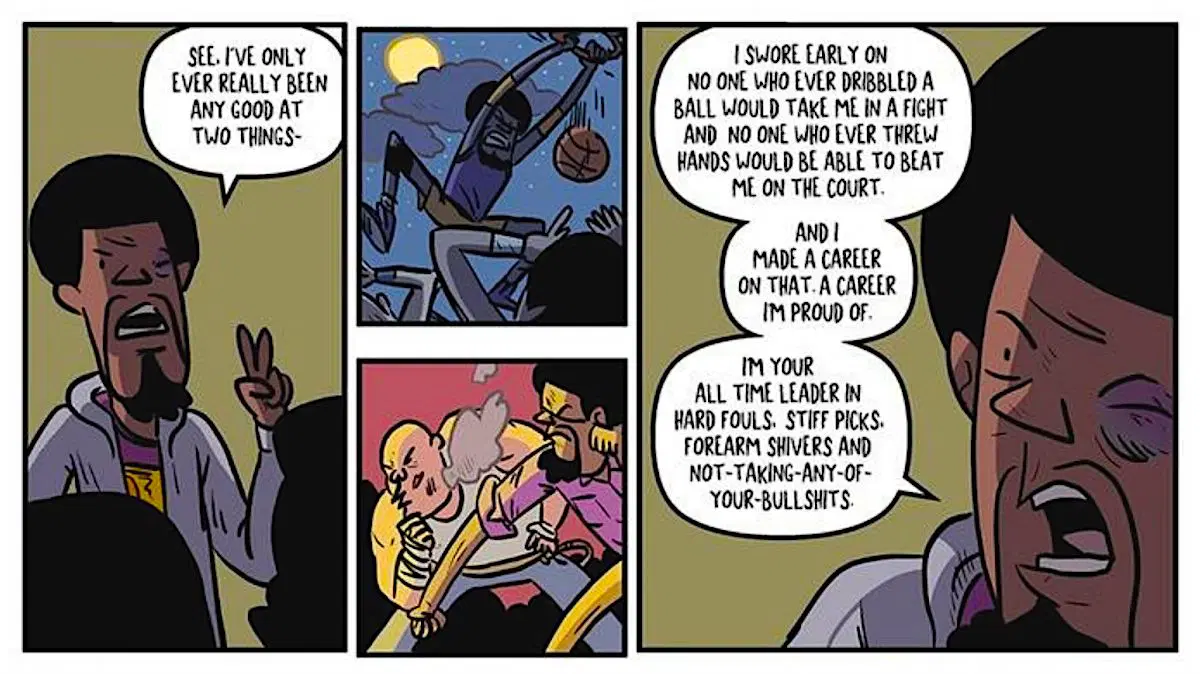 Sometimes a villain can be too good at being gross or grating, and the supporting cast here definitely finds itself firmly in that court. Although the long payoff to Dracula being revealed to be just a creepy as his cronies is funny, it isn’t so in equal measure to the discomfort it enables. This is a line that some readers may be willing to cross, a wash of moderately outdated Workaholics like humor that does work at situationally appropriate times, but others may not be for good reason. Those looking for a firmer line between this and the latter may be better off with something like Rock Candy Mountain which plays its musically inclined demonic jokes much safer in general than the child endangerment that Old Head weirdly finds itself in a rut of, and unfortunately compounded by samey fight and sports scenes. Again, this is a matter of purely personal preference but one you may not expect to be challenged by a story that is on its surface a cartoonish comedy about basketball and vampires.

Readers may also find some of the internal logic a little confusing, a minor nitpick here being that, given the timeline in the text, Gliven started playing basketball in his late 20s — not his childhood — and the flashback scenes, while well implemented, take a huge brunt of the expository burden in a way that makes some of the realizations by the present characters feel unearned (even if you take the cop-out that it’s all being explained to them as much as us). This, much like the off-color humor, is not enough to sink what is a very sweet and silly story, but it is present enough to stop the narrative flow just often enough to be notable. There is a marriage of compromises here that probably is only truly understood by the creators crafting a story that is both light and yet rewarding.

Ultimately, then, Old Head is kind of a mixed bag. Its varied art, colors, and the sheer density of its jokes and inevitably complex emotional beats are enough to keep it entertaining throughout, and the long arc of justice bending towards Dracula kind of becomes a Goku-like journey to redemption that works on a more serious level. But it comes with notable concessions to reader comfort and continuity.

Had Starks sat down to plot the entire thing out a little tighter it might have lost some of the characteristic casual charm, but it also would’ve hit a more celebratory consumer than it did with me. Fun but flawed.