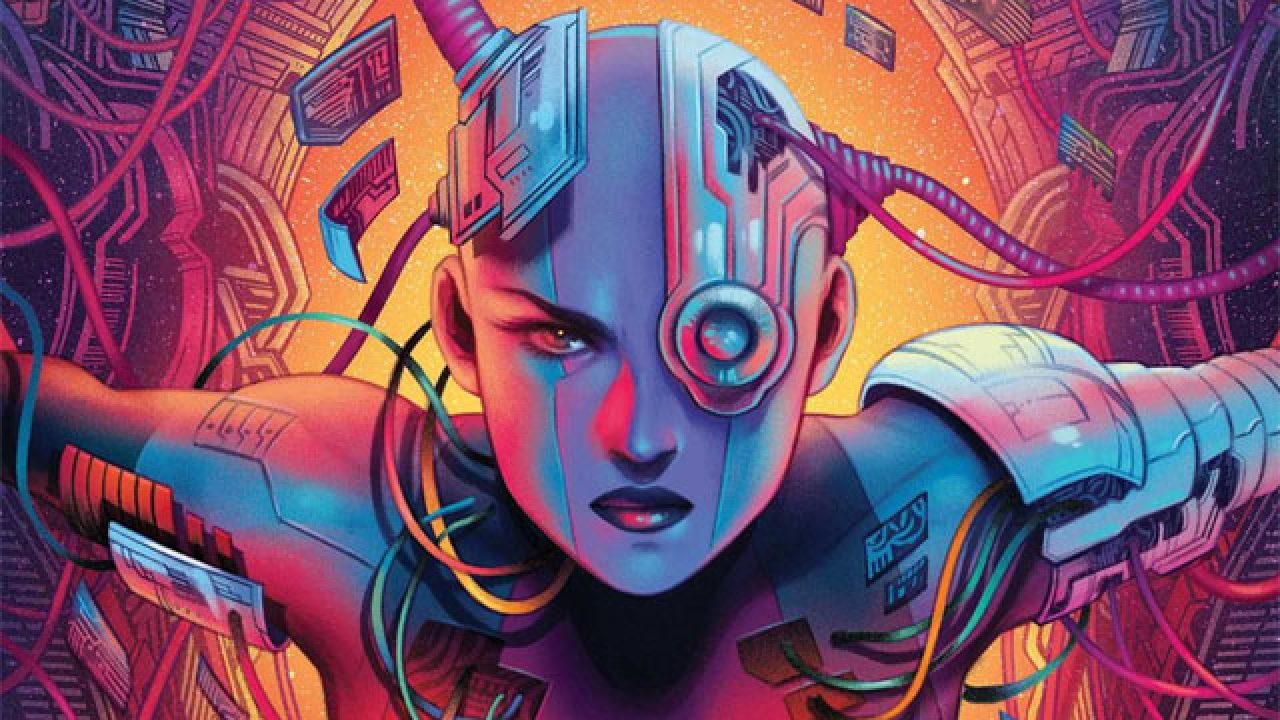 You certainly know Nebula from the MCU movies, but probably don’t know she started with a quite different story in the comics. She actually first appeared as a villain of the Avengers, proclaimed herself Thanos’ granddaughter, and only gained her robotic parts after a long time.

Trying to attain immensurable power, Nebula asked Monica Rambeau – Captain Marvel – to help her conquer the Skrull empire. Even after failing, she came back a few more times, only intending to get more power (unfortunately, it took a while for her to get better development). Then, she met Thanos, her alleged grandfather, but he said she was a liar – that she couldn’t be his granddaughter. Because of that, he attempted to kill her and believed he actually succeeded.

After finding out the truth, Thanos leaves Nebula in an undead state. During the Infinity Gauntlet series – in a surprising turn of events – she stole the gauntlet from Thanos. It was wild, sadly it didn’t last long. Soon, she was imprisoned in Titan, and it was revealed that she wasn’t Thanos’ real granddaughter.

After the Infinity Gauntlet incident, Nebula was left in a catatonic state. One of her commanders rescued and took her to a doctor, who – trying to help her – put some robotic parts in her head (the origin of the look everyone knows). After that, she had few appearances over the years, only coming back with full force after her MCU debut.

She went through a light retcon, starting to look even more like her character in the Guardian of the Galaxy movie and having a relationship of jealousy and hate with Gamora. I like her stories in The Avengers and the Infinity Gauntlet comics; however, the best work in her character has definitely been done post her movie debut. Her relationship with Gamora was further explored. Also, she encountered a vast cast of characters and worked a few times with Starfox, her enemy in the past.

Nebula scored her own five-issue solo series in 2020, though it isn’t finished yet. After the second issue was published, the pandemic intensified, so it ended up being put on a hiatus; the future of the series still is up in the air.

The Origin of Nebula

While the Avengers fight Terminus, Nebula offers Monica Rambeau a position in her organization; she plans on conquering what’s left of the Skrull Empire. Nebula actually doesn’t trust Monica, so she sends her on a mission to learn more about the Skrull base as a ploy to get her killed. As Captain Marvel enters the base, Nebula fires an anti-matter torpedo there. But Monica managed to survive and call the Avengers.

Nebula is pulling the Skrull emperor’s strings and wants to have the next Skrull Throneworld for her. Interestingly, we start seeing her as a sort of strategist, and that’s something that still can describe her today.

During a battle against Starfox, Nebula reveals herself to be Thanos’ granddaughter, which shocks him. Beyonder then appears and, to help the Avengers, teleports Nebula and her lackeys far away.

Starfox finds Nebula and spies her talking about needing a source of energy to complete a plan that will make her stronger than Thanos was.

An old man called Doctor Harker is building a compressor unit he believes will change the world for the better. But fate has other plans because Nebula wants to use it as a power source. She invades his house and forces him to help her.

Spider-Man: Am I An Avenger?

The activation of the compressor is causing inversion effects that can reach the whole galaxy. Nebula continues testing the compressor and ends up almost destroying the universe. After a hard fight, the Avengers, with the help of Spider-Man, disrupt the power flow of the machine, but Nebula slips by them and teleports back to her ship.

There, she says she’ll follow with the plan b, but Starfox deals with her before she can do much. The other plan involves using the Stones of Halkor, which attract the Stranger, a cosmic being. He tells the Avengers that Nebula stole a world-ending device from him, which Spider-Man accidentally activates. Stranger and the Avengers unite and defeat Nebula, but she escapes again. 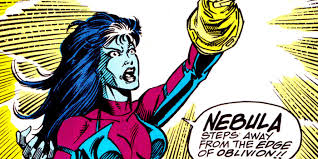 Thanos comes back from the dead and arrives at Sanctuary II. He calls Nebula a usurper and claims she’s lying, as he would never leave progeny. He fires a beam at her and believes she won’t survive, but a soldier hides and protects Nebula.

Thanos finds Nebula and uses his power to keep her in an undead state, denying her both life and death, saying it’s a form of art.

Thanos has gathered all of the Infinity Stones and became a god. Here we find out Thanos is a romantic at heart, ‘cause he did all of that for Death; he isn’t good at it though, she refuses even to talk with him.

Trying to please her, he presents Nebula as a tribute to the blasphemy of life and the glorious promise of death (so cute, right?). But it doesn’t work.

After defeating the Avengers and other heroes of Earth, Thanos gives up his body to rid himself of vulnerabilities. And that gives Nebula a chance to steal the Infinity Gauntlet, one she gladly takes. She uses her newfound godly powers to teleport Thanos far away and restore her appearance. I have to say, I wasn’t expecting that in the least; it was soooo good when it happened.

Thanos, Adam Warlock, Silver Surfer, and Thor come back to fight Nebula. She still isn’t prepared for her powers, as she makes a lot of mistakes and ends up losing because of them. After that, Starfox takes Nebula to Titan.

Defenders: Return Of The Defenders

It’s revealed that she really isn’t Thanos granddaughter and that she was a victim of domestic violence when she was a child. Losing the Infinity Gauntlet and remembering her past is too much for her; she slips into a catatonic state.

Many telepaths tried to help Nebula, but she’s still in a catatonic state. Geatar, her second in command, is alive and taking care of her. He believes nobody in Titan wants to cure her, so he steals a ship and takes her away.

Unfortunately, some essential issues to Nebula’s story haven’t been collected. In “The Herald Ordeal” (issues #70-74), Geatar takes her to a doctor that substitutes portions of her body for robotic parts. Then Nebula and Geatar go to a prison to rescue their crew.

Nebula has to fight Silver Surfer and Jack of Hearts but loses. To escape with Geatar, she starts the engines of a spaceship and kills almost all of her crew. It’s one of the first times you see Nebula’s extreme cruelty.

She tries to destroy Titan, but Silver Surfer, War Machine, and Thunderstrike attack and imprison her there again.

Nebula fights Ronan the accuser, but she loses. She is a member of the Graces (the first time she has had some kind of relation to Gamora).

Her first time appearing after almost 10 years. She went through a few changes, most likely because of her MCU character. Her visual is slightly different, she is the adopted granddaughter of Thanos, and (like in the movies) Nebula and Gamora are sisters now.

Nebula kidnaps Gamora, but the Avengers and the Guardians of the Galaxy unite to save her.

This story bases itself even more on the MCU elements, but it’s the only one (at least until now) that does it. Here Nebula is Thanos’ daughter. She is jealous of Gamora, so she sends her on a suicide mission. One aspect that is really important and used in many stories is the jealousy Nebula feels towards Gamora. In my opinion, one of the best things about Nebula is her and Gamora’s relationship, so it’s always great seeing it as a relevant part of a story.

Tryco Slatterus and Starfox recruit Nebula to help them kill Thanos; the leader is Thane, Thanos’ son. Their first task is to invade Terrax forces and kidnap a mysterious prisoner. Shocked to find out it was the Phoenix Force, Nebula kills Thane, but he is revived and powered up by the cosmic being.

Nebula, Trycos, and Starfox see themselves forced to change sides and ask for Thanos’ help. They form a crew and go find the God Quarry, a place guarded by the Coven where people can get more powerful after facing a challenge. Thanos wants to go there to recover his godly powers.

After Thanos fights and defeats Thane, he leaves Nebula, Tryco, and Starfox stranded in the God Quarry.

Collects: Asgardians Of The Galaxy #1-5

It’s revealed that Nebula decided to stay in the God Quarry and take the challenge. Her objective is to become the deadliest woman in the Galaxy, a title currently held by Gamora. Trying to show she is better than her sister, Nebula attains a new weapon and starts attacking and slaughtering planets.

While trying to destroy the Earth, Nebula is tricked by Loki and sees Gamora killing her mercilessly; she easily believes the illusion, because – despite all – she doesn’t think she can actually defeat Gamora alone.

Thanos is dead, but he might be trying to resurrect himself through Gamora’s body, so a special team dedicated to killing her is formed; obviously, Nebula wouldn’t miss the chance to participate. She is there to be the “Gamora Specialist” and kind of a strategist; it’s interesting to see her like that.

Nebula is a limited series by Vita Ayala and Claire Roe. As I said before, the future of the solo series is still uncertain, but it was probably planning on retelling Nebula’s past and her first encounter with Thanos. You can check the two available issues on Marvel Unlimited.