Moon Knight by Lemire and Smallwood is the definitive take on the character.

We’re lucky to have Moon Knight by Jeff Lemire and Greg Smallwood. The character of Moon Knight is fractured. He can be, and often is, many different things at the same time. That makes it difficult to come up with a definitive take on the character. After all, how do you define the essence of someone that constantly reinvents themselves? Lemire and Smallwood deliver an answer for this question in three parts.

Part One: The Lunatic

It’s an obvious move, but Moon Knight begins by placing its hero in a mental hospital. This isn’t the kind of place people go to get help; this is one of those hospitals that only shows up in horror movies. Right now, our hero is Marc Spector, a broken guy suffering from delusions that he’s a superhero named Moon Knight. Marc wants to be cured, but he can’t shake the idea that the orderlies at the facility are all secretly crocodile-faced monsters.

This is the first face of Moon Knight: the madman. At first glance, many readers scoff at Moon Knight, saying he looks like Batman in a white suit. But despite the many Batman comics boasting a trip through Bruce Wayne’s psyche, madness is a much more central theme to Moon Knight. We know that this is a superhero comic in a superhero universe, so a facility staffed by mythic Egyptian monsters doesn’t feel out of the realm of possibility. But we experience this story from Marc’s perspective, and he thinks he’s losing his mind!

While Lemire masterfully paces this psychological thriller, it’s Smallwood who truly ratchets up the tension. At first glance his artwork seems realistic and grounded, but that’s only a trick he plays so you don’t notice the world falling apart. Things subtly appear where they shouldn’t, and when the story needs to sell the reader on a shocking hallucination, Smallwood can take you into the illusion so subtly you’ll never notice that something has changed. By the time Moon Knight has gathered his allies to fight a bad guy on an Egyptian pyramid sprouting up in the heart of NYC, readers are beyond caring what is real and what is not. So is Moon Knight.

The first arc of Moon Knight is all about introducing you to what makes this character unique. Other superheroes choose to put on a mask and save the day, but Moon Knight doesn’t always know what he’s doing. Sometimes superheroics are just his way of coping. So when I tell you that the second arc of this comic sharply twists into some true insanity, know that the escalation is dramatic.

To further capture the many colorful personalities of Moon Knight, the book can no longer be restricted to one artist. It can’t even stick to a single genre. The superhero Moon Knight is just one of many personalities Marc has running around in his head. “Incarnations” introduces us to a few more: romantic Hollywood producer Steven Grant, down-on-his-luck cab driver Jake Lockley, and space mecha pilot Moon Knight ONE. What’s incredible is that we are still following a single story, but now we are seeing it subjectively from Marc’s shifting perspectives.

Any time Marc turns a corner or you turn a page, things change. He changes. And most effectively, the art changes too. Steven Grant’s story is a melodramatic romance, and his story is drawn by Wilfredo Torres, who has a warm, old fashioned sensibility. Jake Lockley is in a Scorsese flick, so his story is drawn by pulpy horror master Francesco Francavilla. And Moon Knight ONE pilots a giant robot to battle werewolves on the moon, a story that could only be drawn by the great James Stokoe.

Many comics will abruptly shift styles or artists without a strong story reason. Moon Knight’s sudden shifts can be jarring, but you’ll never doubt the artistic intention. When you see him team up with Spider-Man or Daredevil, you get that he’s supposed to be an odd guy. But while he’s out there doing his superhero thing, he literally sees the world – and its art style – shift from moment to moment. While there’s drama to be found in Marc’s identity crisis, this story also makes you understand how difficult it is for Moon Knight to battle evil.

This story might force you to do a little bit more work following the plot, but it helps you sympathize with Marc in a way that the first story never could. Now he’s not dealing with just one false reality – he’s completely untethered from the world. 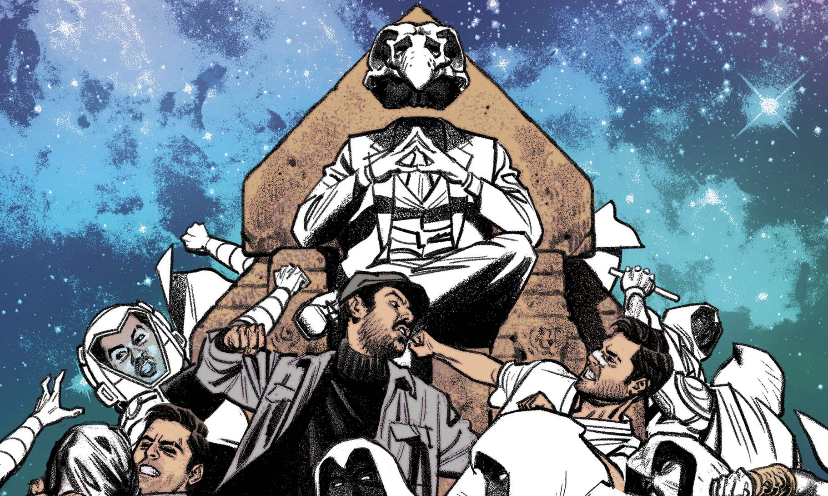 Here’s the bottom line: there are a lot of fun Moon Knight stories that play up his madness. It’s sort of an old trick at this point. The first two arcs of this run pull it off with more style and panache than just about any others before them, but that alone wouldn’t be enough to make this the definitive Moon Knight. That comes in the third and final arc, where we step beyond tricks, beyond hallucinations, beyond illusions, and spend some time in objective reality.

Where the previous arc plays with genre and perspective, this final arc is interested in jumping through time. We see a young Marc Spector growing up as a rabbi’s son in Chicago, struggling with mental health issues from a young age. And we see Marc at the time of his Moon Knight origin, working as a shady gun for hire. Up until this point, mental illness has seemed garish and weird, the kind of metaphorical struggle seen in sci-fi. This last arc actually addresses this overdone genre trope directly. It’s clear that Marc’s troubles started with a real disorder, but years of messing with magic artifacts on secret missions did something to him too. At the end of the story, you understand why he is the way that he is, and what he’s likely to do next.

This grounded part of the story doesn’t undermine what came before it. Far from it: underneath all the mind-games and ambiguity has been a real story about a broken guy trying to cope. That’s what a lot of superhero stories are, but after spending time seeing multiple artists render Moon Knight’s twisted psyche in bright colors, it’s kind of a shock to see that we’ve just been dealing with a regular guy. Well, a guy at least as regular as Spider-Man and a bit more regular than Wolverine or Iron Man.

A good Moon Knight comic is always a technical showcase for comic book craft. There’s a certain tone you tend to find: they want to bend your brain in the kind of magic trick you see in twisty heists or Christopher Nolan movies. And because Moon Knight suffers from an identity crisis, he can always be changed and rebooted and retconned with very little explanation required. That’s what makes these fourteen issues so special. Because even when Marc Spector doesn’t know what the hell is going on, even when the reader is lost, the creators never are. Lemire, Smallwood, Torres, Francavilla, and Stokoe know exactly what story they are telling, and it has a beginning, a middle, an end, and a point to it.

With a twisty live-action Moon Knight production about to arrive, new fans will be looking to the comics to read a definitive take on the character. There are lots of good runs to point to, from the weird Bill Sienkiewicz-drawn stuff in the ‘80s to the high concept Brian Bendis-written stuff in the 2010s. The short Warren Ellis/Declan Shalvey series from 2014 was a lot of people’s default pick for the best Moon Knight comic, but it has been reassessed along with a lot of Ellis’ work.

Fortunately, Moon Knight Volume 8 is better in almost every way. It plays every trick that every creator has ever played with the character, and still finds the time to think about who this guy really is. It’s rare that a single comic run captures every single thing that makes a character tick. It’s even rarer that it can deliver decades of messy exposition without you noticing. Moon Knight does all of that – and, like Marc, you won’t ever see it coming.