Moon Knight is a character with a sordid past, on the page and off. The newest incarnation from Warren Ellis and Declan Shalvey has breathed new life into a hero — or anti-hero —  that many in the Marvel Universe can either take or leave. This issue sees a different side of the coin, as Moon Knight himself isn’t featured as much as you might suspect. 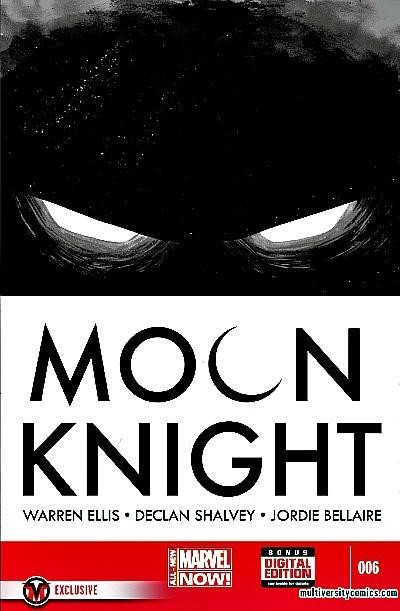 Marc Spector got his start in the pages of WEREWOLF BY NIGHT, back in 1975, as an enemy to the title character. Readers liked the mercenary hero, and he has floated through various titles, and a few tries at his own title, throughout the years. The story goes, he died in Egypt, and was resurrected by the moon god Khonshu, whom he fights for and also wears his symbol, the crescent moon. He has super-human abilities and is very hard to kill, though he has died, disappeared and also gone insane on more than a few occasions from various writers. He does manage to pop up in important events spanning the greater Marvel Universe, as he is also a part of the ongoing ORIGINAL SIN event that is happening right now in the comics.

The story starts out with one of his two featured personas, Mr. Knight, doing what he seems to do best. He has been shown, in white business suit and mask, helping the New York City Police Department throughout previous issues, and this is no different. Yet, one beat cop takes offense to having to receive help from a ‘freak’ and starts to do some digging on the enigmatic Moon Knight.  This pushes him farther down the rabbit hole of insanity that Moon Knight wrestles with everyday, and the results get, well, very explode-y.

This is the last issue by the team of Ellis and Shalvey, which in my opinion is a shame.  I am personally not a fan of Moon Knight, but I am a fan of Warren Ellis, which prompted me to pick up this book from issue one. Each issue has been it’s own contained story, but also has given the reader a little more insight into who Mr Knight/Moon Knight is, and what exactly he is dealing with. This issue puts the character out of the spotlight, but delves into his background, history, and psychosis to give us a broader, more in depth picture of the costume vigilante. Declan Shalvey’s art is mesmerizing, as the dark underbelly of New York City is brought to life with rich color, and yet every time Moon Knight in full cape and cowl, or Mr. Knight, graces the page, the character is drawn with much starker white than the rest of the book, and sharper, less defined lines to accent his weird existence.  This book gets very dark, and by the end their is no turning back for the cop or Moon Knight, which is fine for both of them.

The way this story is crafted, from learning more about Moon Knight through the eyes of this disturbed beat cop, to also learning more about the cop himself as he falls deeper into madness is very refreshing and cool. I have thoroughly enjoyed all six issues by this creative team, and this is most likely my favorite for the unconventional portrayal.  It’s almost unheard of to not feature the title character in only the sixth issue of a new series, and also as the last issue the writer is writing, but that is what sets Ellis apart from a lot of the writers pool in comics today.  He takes chances, and is usually rewarded by interesting and compelling storytelling.

Honestly, this issue holds up and at a lot of levels.  A case could be made that there is a lot of emphasis on the past of Moon Knight, without too much backstory, but that adds to the mystery and intrigue of this character in my opinion. The worst part is having to say goodbye to such a great team in Ellis and Shalvey, and hopefully they can team up on projects in the future, because they really clicked creatively.

CBH Score: 5 out of 5 stars.  Go pick up all six issues of this book, it is well worth it, and refreshing for readers who might not care about Moon Knight otherwise.