Mirka Andolfo’s “Un/Sacred” (2019) is a titillating and tender-hearted romantic comedy, illustrating how the odd-pairing of an angel and demon, Angelina and Damiano, challenge social definitions of domestic normalcy around them. The first volume of “Unsacred,” published by Ablaze Press, consists of seven issues translated from the Italian “Sacro/Profano,” and is a humorous consideration of what happens when opposites attract and try to build a family in a world that doesn’t readily accept their union.

Angelina is a beautiful, blonde, bimbo-natured angel who works as an elementary school teacher, and Damiano is a skinny, spikey-haired demon and self-proclaimed “emo” frontman in a struggling rock band with his childhood friends. The two opposites are immediately attracted to each other at first crash-meeting. Damiano’s initial interest in Angelina is purely sexual but she foils his expectations with her intention to wait for marriage to have sex. Damiano respects her boundaries but he also over-confidently believes she will succumb to his raw demon charms within three days. An immediate jump ahead seven years in the first issue, shows Damiano is still persisting and failing in his ambition to sleep with Angelina, but that he remains a relatively loyal boyfriend to her nonetheless.

From here, much of each issue consists of single page episodes that explore the comedic ways in which Damiano’s eagerness for sex can be innocently misinterpreted by Angelina’s aloofness. Other episodes make cheeky lightness of Angelina’s jealousies, domestic frustrations, and her confusion about sex. Several of these vignettes are credited to different Italian writers, while the art remains consistently Andolfo’s. Longer interludes mature their relationship and tell a more cohesive, romantic story of taboo lovers coming to terms with the challenges that arise. 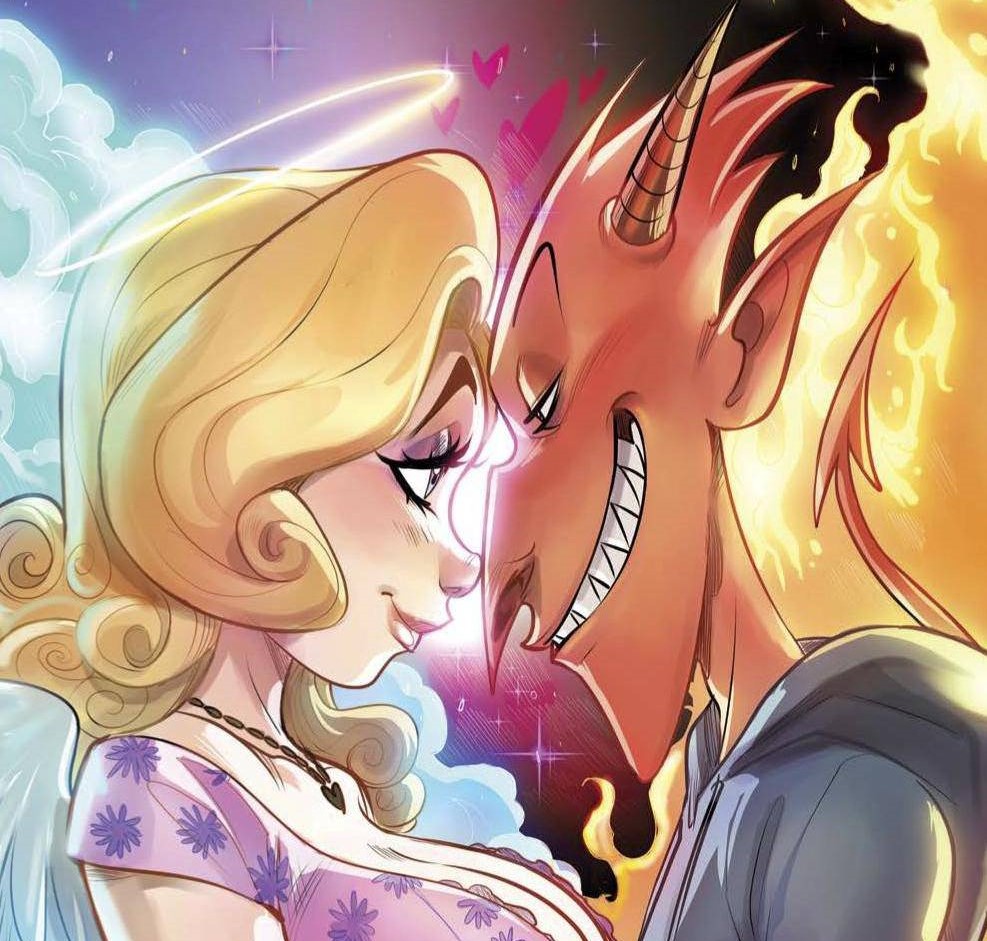 As apparent at first glance, the world of “Un/Sacred” is divided into angels and demons, yet being an angel or demon within this world isn’t based on ye’ olde “good/evil” alignment. Angels and demons are distinguished by what behavior is expected of them, along the binary of what is socially perceived as being either “sacred or profane.” The angels have a sense of their own dignity and piety. They operate similarly to a holier-than-thou economic upper class. The demons aren’t any more evil than angels but represent the kind of person that pursues passion, or gives in to temptation easier. They are seen as a reckless and perverted underclass, characteristics looked down upon by the angels.

This isn’t the world of an eternal heaven or hell either. It’s closer in spirit to our world. God is an absent construct, and the faith practiced by the angels, heavy with Catholic and illuminati icons, professes that everyone regardless of status will pass into another form of existence without the distinguishing features of halos, wings, or horns, This would essentially render them as human as the reader, unable to visually discern the alignment of others based on the appearance of those markers. While social mixing happens, as seen in public scenes, there is still a taboo for angels and demons to be romantically partnered, and no other couple like Angelina and Damiano exists. 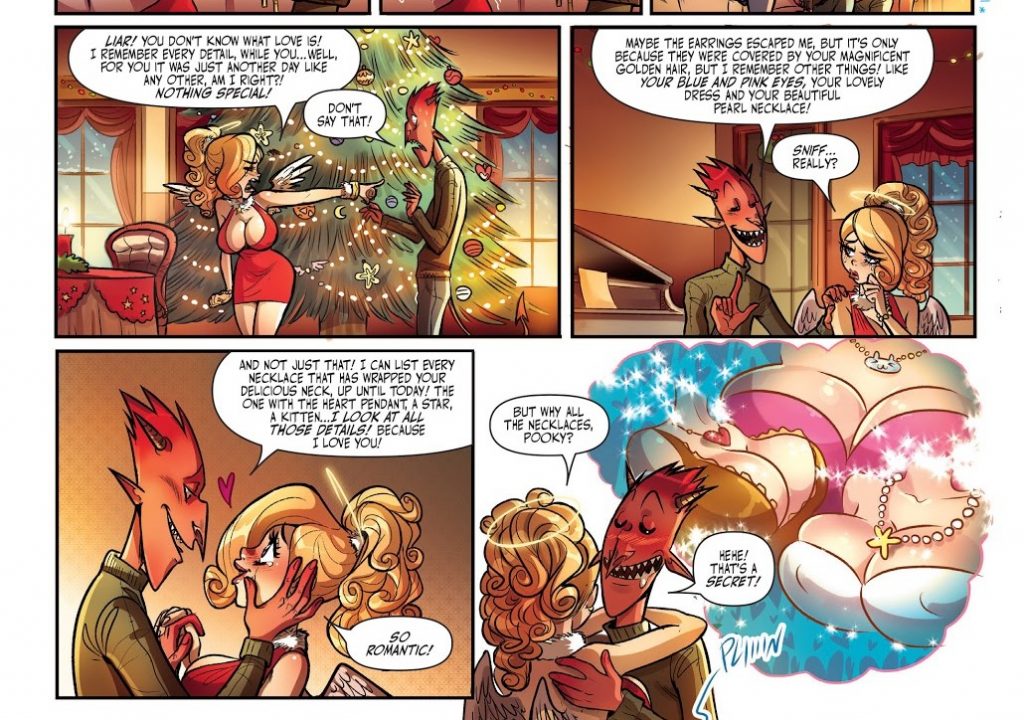 The love between them is very genuine. An endearing experience to read. Against all odds, Angelina really loves her “cherry tomato” and Damiano loves his “Angie”. It’s a thrill to see his eyes light up at the sight of her, while Angelina is full of wonderfully cartoonish expressions that just feel good to look at. Life isn’t all fluffy-love and sheer negligees either. His childhood friends feel Angelina is taking Damiano’s focus away from the band which is why they remain unsuccessful. Them’s the breaks, dude.

Meanwhile Angelina is losing her mother’s favor and approval for dating a demon, which she interprets as a failure to honor her upbringing. She won’t deny her daughter’s happiness with Damiano, but she also does not want to include him within her vision of family. So although Angelina’s mother reluctantly agrees to officiate their wedding – “with great prejudice, er… with great joy, I pronounce you husband and wife” – in the very next page she promptly states her intent to not be part of her daughter’s life anymore and exits stage left, deeply dampening Angelina’s mood at her wedding day.

“Un/Sacred” carries a “mature” label on its cover, for sexual situations, sexual innuendo, and partial nudity. The humor is very tongue-in-cheek without becoming explicit, akin to how “good girl” comics played with innocent aspects of sex. Humorous witticism and twists in characterization are packed in, keeping the reader interested in a romantic storyline that, unfortunately for this pervert, keeps the real sex underneath the blankets, or table. However, the art excels in being boobalicious! Angelina’s generous breasts often take center stage as either the cause of a commotion – as when admirers in public or her students become overly affectionate – or as the focus of Damiano’s infatuation with Angelina – when Angelina is upset that Damiano can’t recognize the pair of earrings she wore on their first date, he counters that he remembers every single dress and necklace she ever wore because, unbeknownst to her, he has a selectively photographic memory for how her breasts are adorned by them.

There are a few uncomfortable moments when the sexual punchline can veer into non-consensual territory, as when Damiano becomes so horny he sneaks in to Angelina’s window and has sex with a blonde in the bed. Angelina discovers them and questions what he is doing in her grandmother’s room. The grandmother is into it, and is thereafter sweet on Damiano much to his discomfort. All’s fair in the games of temptation angels and devils play. Another note of warning is necessary with the trope of Angelina being physically groped on a bus by a lecherous old demon who turns out to be Damiano’s father. And because demons will be demons, helplessly prone to temptation, he continues to creep-on and grope Angelina when he gets a chance.

As a queer reader I have an active radar for LGBT inclusion, which is unfortunately absent from this story so far. Damiano does find himself in the position of being a bottom in some situations – a few times too many to be read entirely as straight – One night Damiano is drinking with his best friend Guida and they start to discuss what turns them on, they both wake up the next morning to the undeniable evidence that they had sex, and Damiano was definitely the bottom. In another situation, Damiano requests to have sex with Angelina “from behind” and she forthwith rams an impressive dildo in his “behind.” The source of this humor is based in Damiano’s discomfort or lack of awareness. Gags aside, it’s not a positive experience for his ego. Indulgent creatures as they are, if the demon were a shade of gay he’d be all-in. Alas, it’s a very straight story, worth a read because sex and odd-couples are eternally compelling. 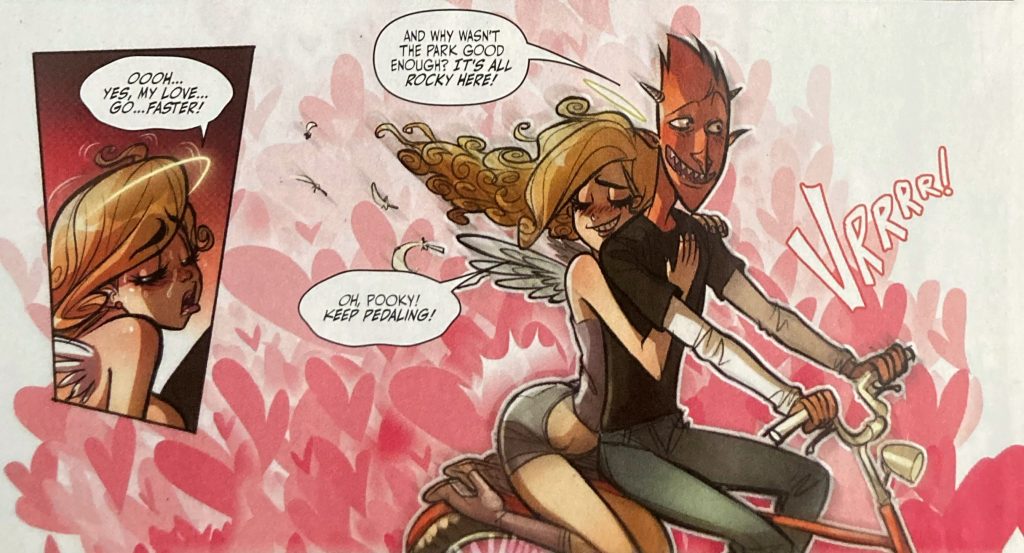 There is a long history of opposites-attract type of couples in romantic comics that have confronted the social prejudices of their day. The tone of “Un/Sacred” harkens to the golden age’s era of “good girl” (1930’s-40’s) comics, and the “working-girl/flapper” comics before them (1910’s-1920’s), most especially Chic Young’s “Blondie”. Remembered mainly as a globally syndicated strip about the slap-knee give-and-take of domestic life, the early story of Blondie Boopadoop and Dagwood Bumstead directly confronted the rigid prejudices of social life in the USA when it was introduced in 1930. Dagwood was the wealthy heir of a millionaire railroad tycoon, when he fell in love with Blondie, a working “flapper girl”, a label society applied to young girls in the 20’s considered to be a reckless, promiscuous, and low-class. Many of the strip’s early jokes focus on Blondie’s charming incompetence as she tries to impress her way into Dagwood’s judgmental family. In 1933, when Dagwood and Blondie were married, Dagwood was entirely disinherited from his father’s fortune and the newlyweds were forced to find their way in Depression-era USA, unassisted by wealth. After this turning point, Blondie more often played the straight man to Dagwood’s bimbo antics, and their ‘love-over-money’ relatability turned “Blondie” into a highly recognizable and influential comic that Young sustained for decades.

Similarly to Blondie and Dagwood, in an age of vast wealth disparity and economic depression akin to the 1930’s, Angelina and Damiano confront modern social prejudices of classism that still exist from that era. Symbolically, the sexual union of an angel and demon is enough to be considered blasphemous in Andolfo’s home country of Italy, so to bowl over the presumptions of religious piety is quite a brave thing for a romantic comic to do. The lovers experience the consequences of their love and resolve to continue to grow in trust anyway despite a world that refuses to change itself to accept them. They bring out the best and the funniest in each other as they grow together and, in issue seven, Angelina gives birth to a sweet little girl with devil horns and angel wings, Eden. She’s a real cutie, go look!!

It’s the way we move forward, cross social boundaries, and navigate the adversities in our lives that tells an interesting story, and Mirka Andolfo has me hooked, eagerly waiting the months between newly translated issues to see how Angelina, Damiano, and Eden are moving forward in Volume Two.

Volume One of “Un/Sacred” consists of 7 issues, published by Blaze press in 2019. Un/Sacred Volume 2 will be released throughout 2021!