You are here: Home / Featured / Marvel Then: Morbius Moves Forward in Marvel NOW! 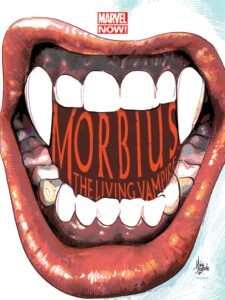 The Morbius (2013) series seems to come a bit out of left field, considering that the last time we’d consistently seen Michael M. had been back in the early 1990s with Rise of the Midnight Sons. Receiving a hard push into his own series roughly two decades later with a new costume and a full superhero makeover may have seemed like an odd move because… it was!

Morbius isn’t a character who works particularly well as a superhero—he’s much better-suited for horror-adjacent solo series or guest spots in the books of more traditional heroes like Spider-Man. Yet Marvel NOW! was all about bringing old concepts into the modern age whether they liked it or not, so we ended up with a fairly unusual short-lived Morbius solo that sometimes works, though it often does not.

A Morbius Series, I Guess

Over in Amazing Spider-Man leading into the Marvel NOW! reboot, big changes in the status quo were happening for the wallcrawler as Doctor Octopus took over his body and set out to prove that he could be a better Spider-Man than Peter Parker ever was. In the issues leading into Octopus’s plan coming to fruition, Morbius was fast at work curing Kurt Connors, the Lizard. Though he ultimately did so, the Connors persona was destroyed, and the Lizard tricked Morbius into regressing to his bloodthirsty state. This landed him at The Raft, which he quickly escaped from into his own ongoing. 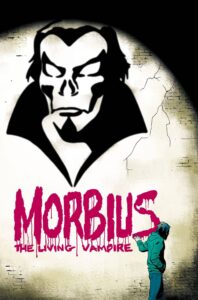 This series dropped Morbius into a New York suburb called Brownsville and revolved around some pretty basic “new hero on the block” tropes that didn’t do the series many favors and undermined the overall skill of the creative team. A retread of Morbius’s past wasn’t required and wouldn’t have clicked with the overall vibe of the NOW! line, but this story is divorced from the character we’ve known before in ways that make his edge seem a bit dull. Meeting up with a single mother named Wanda and a homeless artist who holes up in an abandoned theater named Becky, Morbius immediately becomes the least interesting character, which doesn’t bode well for the book.

The villains are standard, with one predatory drug dealer feeding on the youth and Morbius’s long-thought-to-be-deceased father making appearances alongside a masked man named the Rose and his assistant. Attempts to pour life into these characters are admirable, but they remain very run-of-the-mill, and the threats they pose even more so. Some of them target Morbius’s new neighborhood of Brownsville due to their history with the area, others simply because Morbius is there, but at any rate, their stories wrap up by the time the final issue rolls out. 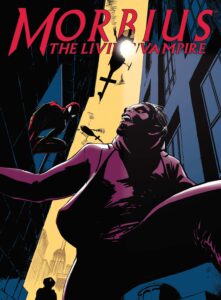 A few issues into the series, when Morbius attempts to apologize for the many problems he has rained down on Becky’s head, she interrupts him to say that she doesn’t want him to apologize—she wants him to fix it. Over many decades of Morbius appearances, relatively few people have ever asked him to step up and take responsibility for his mistakes, making this an important shift of direction for a narrative that has mostly allowed him to drift from mistake to mistake without owning up to any of them beyond a self-pitying inner monologue.

This extends to a speech Morbius gives in #5, in which he notes that it’s the people of Brownsville cleaning up his mess and not him saving them, which is clearly more intended for the reader than the people he’s speaking to. Yet within the very same issue, his face is painted on the side of a building. (In the next issue, he seems surprised that Spider-Man has “somehow” tracked him down.) Becky notes that the neighborhood may not have a superhero, but it has Morbius, which makes his insistence on not wanting to take the limelight away from the neighborhood redundant.

This is one of those comics that ends pretty much the second it finds its footing. Using the last issue as a spotlight on Becky from a year into the future works extremely well, with her and Wanda lightly chatting the day of her art opening before an interviewer whisks her away. Asking to reflect on her inspiration, Becky thinks back on her friendship with Morbius in a way that leaves us uncertain whether he has survived his last battle with the Rose. As anyone who has read further appearances from the character knows, he did indeed survive, and he shows up as a friend to Becky as her reception draws to a close.

In the end, this series may have been more successful if told from Becky’s perspective, as it would have spared us a great deal of Morbius’s agonizingly self-absorbed thoughts. But it was not to be. 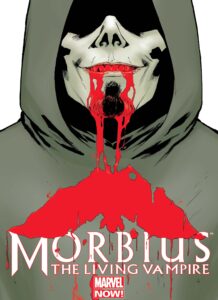 There are a few central narrative reasons why many other NOW! series worked and this one did not, but the problems mostly boil down to trying to make an apple into an orange. The appeal of Morbius isn’t that he’s a quippy, street-smart hero of the people. It’s that he’s a strange-looking guy in a plunging V-neck who has the most severe case of anxiety you’ve ever seen, compounded with an admittedly earned guilt complex. As we know him, Morbius is a science nerd raised mostly in isolation whose mysterious blood disease led him to desperate measures and cost him the only two people that ever particularly cared about him. He’s a genius with limited people skills who is overall incapable of snappy banter, and that’s fine because there are about a thousand other characters who have the snappy banter thing on lock.

Reimagining characters for a modern context isn’t easy, and it’s admirable to stick your neck out and give it a try. Reboots have given us some of the best comics ever created, but there are at least as many that are destined to remain more or less a blip on the radar. There are plenty of cool, of-the-moment heroes in the world, but there’s no need to make Morbius into another one. If a new direction was necessary, there might have been a character arc to explain why. As it stands, he was simply gone for a while and then reemerged with an aesthetic closer to a character from Twilight than something from a Richard Matheson story, and it just doesn’t work for him.

That said, Morbius (2013) not a bad series, just one that comes mostly out of left field and never clicks until its final issues. Highlights include the supporting cast, which is overall admirably hesitant to let Morbius slink into the shadows to brood when he’s put their lives very much in danger. One wonders what might have been had they been allowed to thrive. As Morbius lingers incessantly on the harm he causes and how little he can do, he is reminded that he has more power across the board than anyone else in Brownsville. This remains an important chapter in Morbius’s story, but its shaky start costs it the gold.