I love comic book ephemera from Marvel’s Silver Age, the early 60’s through early 70’s when Jack Kirby, Steve Ditko, Stan Lee and the mighty Marvel bullpen were turning Marvel Comics into one of the biggest pop culture phenomena in the world. Sure, I love the comics first and foremost, but the historical treasures from the era – things like the Marvel Bullpen album Stan insisted they make – are a delightful trip down an out-of-state nostalgic highway.

So naturally when Abrams ComicArts publishing reached about sending me a copy of Marvel Mini Books to review, I didn’t hesitate to explore. Simply put, these minis (and their history) offer short and sweet spells of delight for longtime Marvel fans.

contains facsimiles of the six unique character books, and an additional mini history of the books production (written by comics historian, creator, and longtime Jack Kirby collaborator and advocate, Mark Evanier). There are featured books for Spider-Man, Thor, Hulk, Captain America, Sgt Fury, and Millie the Model. My “absolutely nobody requested this” mini power rankings are as follows: 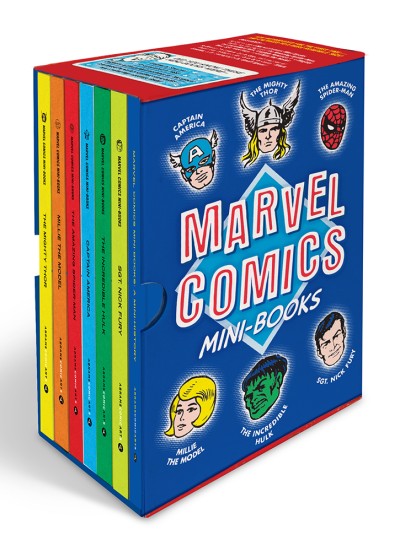 According to the history written by Evanier, the original Marvel mini books debuted in April 1966 (same time as the center of the Galactus saga in Fantastic Four #49!), could be had for $.10 in vending machines, and were approximately the size of a postage stamp (technically smaller!). You’ll often see copies of the minis (they’re quite the collector’s item – I found a Thor: Red copy that sold for $130!) photographed next to American coins for a size comparison.

In case it wasn’t abundantly clear, the original versions of these books are insanely small!

Each mini contained 50 black-and-white pages, and was about an eighth of an inch thick. The reprinted facsimiles are scaled up so you can, you know, actually see them, but still a wee 4 x 6 inches.

Evanier does some journalistic detective work to try to work out creative credits for the works (both he and Roy Thomas agree it could not have sensibly fit into Stan Lee’s extremely busy schedule). Evanier suggests several of the books were likely drawn by Marie Severin before she’d go on to become Marvel’s artist on Strange Tales (Doctor Strange) and Incredible Hulk.

Evanier also uncovers Denny O’Neil wrote the Captain America book, in an interview not long before his sad passing earlier this year.

According to O’Neil, who many know from an illustrious comics career including works like Green Lantern / Green Arrow

, Question and a long tenure as Batman editor, “It was the first thing I ever did of a super hero nature… Oh and I think it was also the only time in my career I wrote Captain America!” 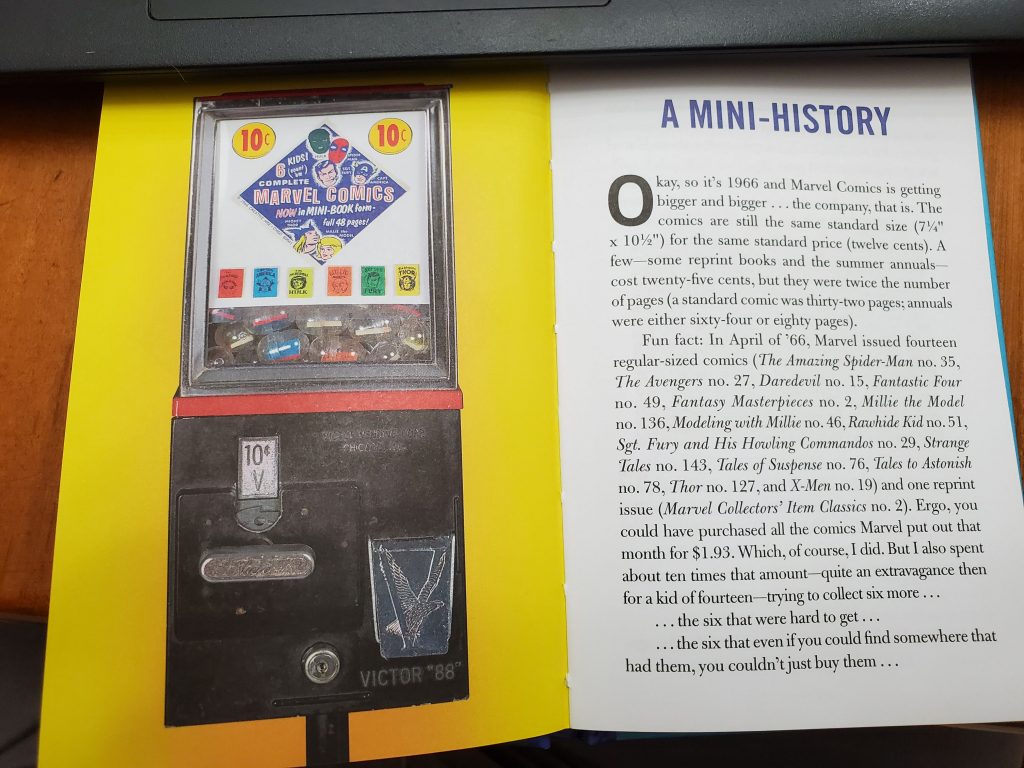 Other secret firsts include the surprise Marvel / DC crossover in the Spider-Man mini, with Superman flying by and collecting a bag of loot Spider-Man salvaged from “some known crooks.” As Evanier points out, this is a clean decade before Superman vs. The Amazing Spider-Man.

In terms of the actual content of the books, they are extremely simple works for young readers. Virtually all spend some time on the character’s origin and deal, but the structure can actually vary dramatically. For example Spider-Man takes a left turn into the Superman crossover and then ending with two (terrible) jokes, which was the publishing house’s stock and trade before making the Marvel books.

The Hulk book starts with a quick comics intro, but then goes into nursery rhyme and jokes, including the following gem:

Child: “Hulk what do you take for a bad cold?”

Hulk: “What do you have to offer?”

Millie the Model is exactly as era-cringey as you’d expect, delivering pearls of wisdom like: “In Today’s Modern World Anyone Can At Least Be Attractive!” At least!

Honestly, I’d have plenty of fun reading Cap, Spidey, Thor and maybe Sgt Fury to my young kids, although the rough art might not meet the standards currently set by a rotation of The Gruffalo

and Room on the Broom. Mostly, though, I’d recommend these to longtime Marvel fans looking for a nostalgic kick. Evanier’s history is quite good, especially for those of you deeply interested in names like Larry Lieber, Sol Brodsky, and Flo Steinberg.

All in all, I really dug learning about the history of these oddball artifacts from Marvel history, and I’m happy to add them to my Marvel collection.