X-Men Dawn of X comics are back! Marauders #10 kicks off the return of post-Comics Shutdown X-Men, and it’s another great entry by Gerry Duggan, with art from Stefano Caselli and Edgar Delgado.

Marauders #10 focuses on Emma and the crew’s efforts to squash their many enemies, after the death at sea of Captain Kate Pryde. The proceedings begin with the Russian manufacture of mutant power dampening weapons, based on designs originally built by mutant and Krakoan ally Forge. This is a smart and much-needed focus, as it’s felt like mutant squelching tech has been available to every tom, dick and Igor throughout the Dawn of X. 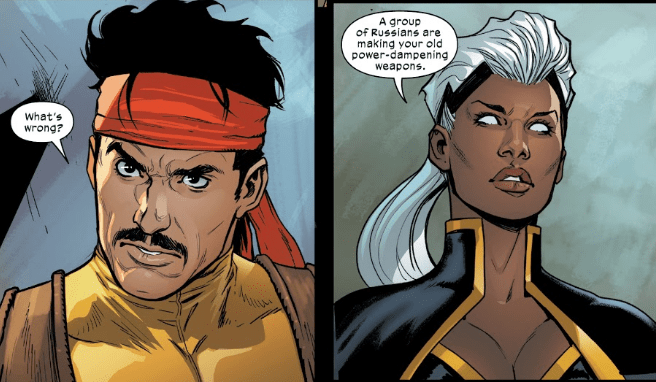 I particularly like that it’s Storm who confronts Forge about the misuse of his designs, since it was Storm who was hit and depowered by this tech back in Uncanny X-Men #185 and explored in Uncanny X-Men #186 (“Lifedeath” by Chris Claremont and Barry Windsor Smith). This doesn’t come into play this issue, but having coincidentally just read Marvel Fanfare #40 last night, I do also like to point out that it was actually Mystique who set Storm up to get hit by that tech way back when, and that she cosplayed as Mohawk Storm during their nightclub meeting.

Emma kicks off the Hellfire Trading Company’s mission without consulting the Krakoan Quiet Council, standing them up and particularly leaving Sebastian Shaw out of the loop., It’s revealed that the prevalence of these new anti mutant weapons is the result of a kidnapped former Forge assistant, fortunately still somewhat loyal to Forge (despite working against his will for anti-mutant threats, he’s at least intentionally mitigating the weapon’s power so the effects are quite temporary).

Emma, Forge, Bishop and crew infiltrate an opposing vessel to destroy the technology and free the weapon designer. With Kate out of action, Emma steps into a more active role, taking out a variety of soldiers with Pyro and his “I know that’s a Marauders tattoo on his face but it suuuuuure looks like Blackface” look at her side.

One of the most memorable scenes involves Emma unbuttoning her top and confronting soldiers, before psychically ordering them to shoot each other in the kneecaps. With Emma weaponizing her sexuality, I didn’t find this as sleazy as it can often be throughout superhero comics history, and frankly it’s perfectly in character for Emma to own her sexiness as a weapon. That said, the strangest part is that she would need to? Emma’s a remarkably powerful telepath, and it seems odd to me that she would need to distract soldiers in this way.

Upon completion of the successful mission, Emma mindwipes the vessel’s opposing forces, not only so that they’ll forget the last month of their anti-mutant lives, but so that they will become accepting, tolerant, empathetic people towards mutants and all oppressed minority groups, specifically calling out gay, disabled and trans peoples. My first thought here was that I love Emma resolving threats with a dose of inclusivity, but I’ll admit this is also a bit of a Pandora’s box. Why not do something like this more broadly? Why not manipulate minds to remove hate and bigotry on larger scales? Surely with all the powerful telepaths at Krakoa’s disposal there are options here. I don’t think the intention is anything other than this confined gesture, but it begs the question about psychic control as a larger part of mutantkind’s plan.

The biggest development during the Marauders’ successful rescue mission is the reveal of the team’s dead ass spaceship.

The other biggest development is the reveal of the team’s dead ass spaceship. Bishop – looking absolutely dapper in his new Black Panther meets Red Bishop costume – asks Christian Frost about the ship and receives some relatively mysterious answers.

The ship is called “The Mercury,” which is the same name of the ship we’ve previously seen in Submarine form, piloted by Christian Frost, in Marauders #5. I take the name to allude to the shape-shifting, liquid state of the vehicle. There is of course one of the younger, newer mutants Cessily Kincaid, Mercury, but the idea that this young mutant was turned into a ship seems quite unlikely!

Otherwise, my first thought was a repurposed EVA, Fantomex’s ship/mutation. Not entirely sure how this would work sans Fantomex, and given his mysterious status presumably until Giant-Size Fantomex we may just have to wait and see. Still, I quite like the idea of EVA playing a role in the Marauders work.

Which brings us back to the mystery Marauders has been teasing since issue one – what’s the deal with Kate Pryde and Krakoa? Issue #10 once again confirms that Sebastian Shaw was correct in postulating Kate would not be able to revive via resurrection protocols, as Professor X and the Five face yet another failed attempt. I’ve seen a billion really fun theories about why this is the case from Krakin’ Krakoa comments (my favorites are probably “Kate’s a Neo!” and the “She’s a non-mutant X-Men sleeper based on The Adamantium Agenda”), and while researching I found a FANTASTIC debunking exploration video from BlerdsWithoutFear (link in the shownotes). Seriously, well worth a watch.

In the meantime, though, I’ll pitch my current working theory (aside from the most likely answer that I’ve been saying, which is that Kate’s powers are simply unique and freak out Krakoa).

For starters, I don’t think Kate’s being locked out of Krakoa by Moira and company intentionally. In her letter to Nightcrawler, Kate writes “Hell, I can’t even phase through most of Krakoa,” which I’ve seen X-fans take to mean Moira is blocking Kate’s powers so she can’t uncover her no-places on the island. A couple thoughts here – 1) I don’t believe Krakoa has “power dampening” set up for non-mutants, so if Kate was some sort of non-mutant mutant (a Neo, an External, etc), her powers should still work. Again this is conjecture but we’ve seen the Fantastic Four’s powers work on Krakoa, so it’s not inherent to mutants and 2) Kate’s inability to phase through Krakoa would have to be a one-person block set-up and somehow implemented by Moira et al, on the off chance that she might accidentally phase directly into one of Moira’s no-places. That just seems like an extensively irrational fear to have, as opposed to say Precognitive mutants, who would be likely to uncover Moira’s secrets. 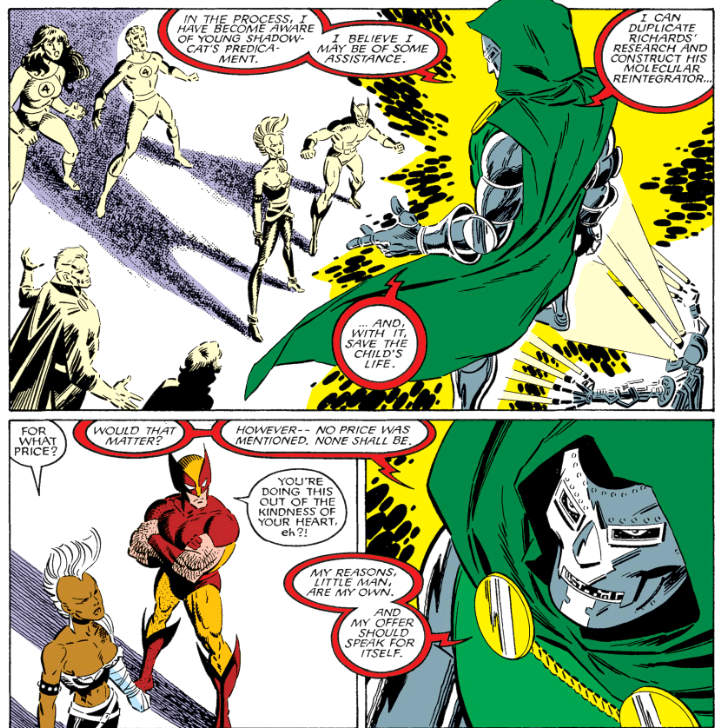 So, if there is going to be a rationale beyond incompatible powersets, back in the original Fantastic Four vs. X-Men miniseries from 1987 the “Mutant Massacre” had left Kate unable to turn solid, stuck in a phased state that was threatening her life. To save Kitty, the X-Men turn first to the Fantastic Four, and ultimately to Doctor Doom. It seems not only believable but likely that Doctor Doom would have altered Kate in some way in order to ensure leverage against mutants at a future date.

Likewise, Doom’s own plans may have been complicated by an absolute comedy of errors that occurs while Doom (and then Reed Richards) attempt to keep Kate’s body from completely dispersing to the winds. Magneto’s messing with the systems left and right throwing around Magnetic blasts, Psylocke’s desperately trying to keep Kitty’s personality and memories together, and Reed has to perform all the calculations instantly in his head without any errors! I’d completely buy that whatever backdoor secret Doom implanted got warped in the process and are causing feedback that keeps Kate out of Krakoa.

A few supporting pieces of evidence, apart from the fact that Doom never acts out of pure benevolence that won’t also support his own quests for power. First, there’s a callback to Kate’s injuries in the “Mutant Massacre” in Duggan’s letter from Kate to Kurt. More directly, in the pages of 2020’s X-Men/Fantastic Four, Kate is a central player (with the series occurring chronologically prior to Marauders #6), accepting the aid of Doctor Doom as he now seeks to aid Franklin Richards in his own fading powerset. Kate’s turn to Doom is perfectly validated within the storyline, but it’s also possible this is a part of the triggers Doom implanted.

Plus, it’s perfectly clear that Doom resents the hell out of Professor X’s Krakoa, and the implication that anyone could be superior to him. It’s hypocrisy to the utmost coming from Victor, but again, the idea that Doom would view the rise of Krakoa as the time to implement Kate as his sleeper agent is something I fully buy.