While he’s been laughably drunk and bombastic throughout the Krakoa era of X-Men, Gabriel Summers, aka Vulcan’s return to the world of X-Men brings with a huge mystery that extends from Hickman’s X-Men to Immortal Hulk to cosmic fallout from the 2009 event War of Kings.

In X-Men #8 (2020), Gabriel Summers, aka Vulcan, is shown having restless dreams/nightmares about his time floating through space in the Fault, in the wake of his battle to the “near death” with Black Bolt in the cosmic event War of Kings. His hard partying lifestyle would seem be a coping mechanism. At the same time, Shi’ar Battle records from this issue let us know that while presumed dead, Vulcan in fact *never* died, implying he was not resurrected on Krakoa but instead somehow found his way from War of Kings to House of X.

This clear and present mystery got me thinking about *why* Jonathan Hickman would want to call back to War of Kings, and pretty soon I was falling down an endless theory rabbit hole pertaining to 1) Black Bolt’s role as one of the Celestial Messiahs as seen in my video connecting Hickman’s FF to the upcoming Empyre and 2) How Hickman’s X-Men and so much of Marvel right now is on a cosmic crash course with “The Death of Death,” with the third Summers brother perhaps at the center of it all.

If stating Vulcan never died wasn’t enough, Hickman and artist Mahmud Asrar hammer home the point by mirroring the exact same panel layout used in FF prior to showing Black Bolt’s escape from the Fault (shouts to @AbyssalOdin on Twitter for being the first I’ve seen to identify these layouts are exactly the same!).

Before digging into what this means, a quick refresher on War of Kings is useful to understand why Vulcan and Black Bolt are simultaneously drifting in the vacuum of a tear in space and time. We get there because Vulcan, having ascended to Emperor of the Shi’ar following the “Rise and Fall of the Shi’ar Empire” storyline written by Ed Brubaker in Uncanny X-Men, is at war with the Kree Imperium, at the time ruled by Black Bolt and the Inhumans.

Very very notably, the Vulcan of this era is a mad king, warped by power and bloodlust after an admittedly traumatic sequence of events detailed in the pages of X-Men Deadly Genesis.

In “Deadly Genesis,” we learn that Vulcan is the long lost third Summers brother, a secret part of Professor X’s history as the group of young mutants originally sent to rescue the OG X-Men from Krakoa, before Giant-Size X-Men #1 in 1975.

With the aid of Darwin, Vulcan does not die, but is instead launched into space on a piece of Krakoa (my head is buzzing from the House / Powers connections here), until his return to the living after the the post House of M Scarlet Witch’s M-Day.

So again, this all sets Vulcan on a violent collision course with Marvel Cosmic, culminating in a fist fight with Black Bolt. Despite his love of explosions, it’s actually Black Bolt’s planned Terrigen-Bombs (an idea Hickman would gravitate to again during New Avengers and Infinity) that creates the Fault in space, and seemingly leads to the death of the two Kings. 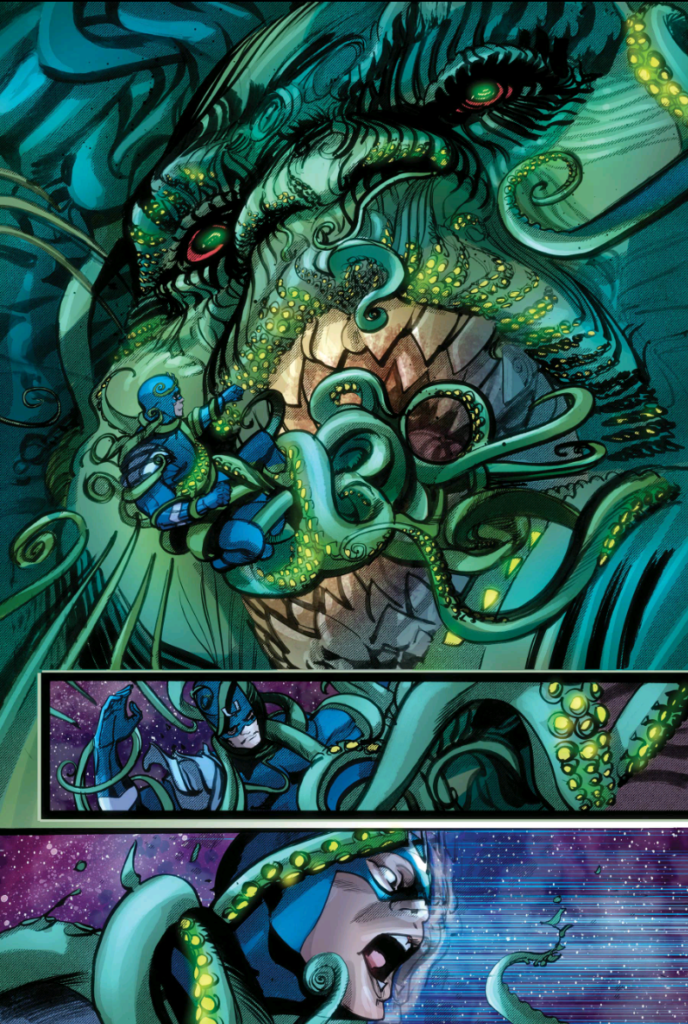 Of course, we now know the Kings did not die. Before detailing his genetic prophecy as the Midnight King and Celestial Messiah, Hickman and artist Greg Tochinni deliver a few pages of Black Bolt’s escape, although the specifics are few. My biggest takeaway is that it looks like Black Bolt is fighting a many-angled one, the Cthulu like entities that dominate the Cancerverse. Again, though, the escape effectively boils down to “Black Bolt’s destined to fulfill prophecy and his powersets dope, so sure he can escape.” It should not come as a shock that there could be more to it.

The cancerverse is the realm that lies at the end of this Fault, as discovered by Quasar in Realm of Kings, and most thoroughly explored in The Thanos Imperative. It’s an alternate dimension that follows the trajectory of our known Earth-616 until The Death of Captain Marvel story (Marvel’s first original graphic novel by Jim Starlin) is reversed. It’s a truly deathless universe, with undead parallel universe “Revengers” and these Many Angled Ones seeking growth into the Marvel U’s known reality.

Speaking of the Cancerverse – and this is where I really start to run off the tracks – the concept is very relevant to the current state of X-Men, Immortal Hulk, and others. In Valkyrie #7, written by Jason Aaron and Al Ewing with art by Cafu, we’re introduced to “The Death of Death.” As Jane Foster tells us the entity is “the living judgment of death as a function of the universe,” literally determining whether or not Thanos’ longtime paramour Lady Death can die.

As part of the evaluation, The Death of Death notes that in the Immortal Hulk “A green door swings open, and death is irrelevant” and that in X-Men “A pod grows new life, and death is without meaning.” It’s a wise observation that the recent trend in the best Marvel Comics is to literally take death off the table, whether it’s through Ewing and Joe Bennet’s cosmically perpetual Hulk, or the resurrection protocols on Krakoa detailed in House of X.

There’s also a meta observation here that superhero comics have so heartily exploited killing and reviving characters that the affair has lost meaning, which is a big part of why I like Immortal Hulk and X-Men’s approach to death as a narrative device.

It also sets up Jane Foster, Valkyrie, to make the case for death. In doing so, Jane determines “A universe of living cells that didn’t die but still reproduced. I’d call that a cancerverse. And I don’t think I’d want to live there.” I’m confident that’s not an accidental turn of phrase, especially given Ewing’s love of Marvel Cosmic, and it sets up the idea that current trajectory of Immortal Marvel has the makings of a well-intentioned cancerverse. There are perhaps concerning similarities when you remove death from the circle of life.

So bringing the Cancerverse into the cosmic portion of X-Men makes a strong amount of thematic sense, and no one in the world of mutants has closer ties to the Cancerverse than Vulcan.

This is pure theory, but I’ll also note that the Cancerverse has returned to Marvel very recently in the pages of the rushed Annihilation: Scourge mini-event. After being led by an exiled Sentry, the Cancerverse fault now resides under the watchful of a seemingly less evil Sentry in the Negative Zone. (speaking of the Negative Zone and the death of death that’s also where Hickman sent Johnny Storm to die before revealing he was endlessly resurrected by Annihilus, but I digress)

Another possibility for Vulcan’s return is the use of the Phoenix in the aftermath of Avengers vs. X-Men, Marvel’s 2012 event. The Phoenix Force is fragmented into 5 mutants during this time, the Phoenix Five, before ultimately being consolidated into Vulcan’s brother, Scott Summers. When Scott turns Dark Phoenix, the Phoenix force is then taken by Hope Summers, who disperses the energy after re-establishing the mutant population on Earth.

That’s a whole lot of Phoenix Summers combos, and would mark some clean synergy with M-Day reviving Vulcan the first time, and the opposite effects of M-Day reviving him a second time.

It’s a stretch, but this would also connect to Vulcan’s newfound obsession with bombastic sayings about the fire inside him.

Plus in Jason Aaron and Ed McGuiness’s Avengers #32, we’ve just seen the return of the Phoenix!

A personal favorite alternate route relates to the original “Sinister Secrets” from Powers of X. While initially taken to mean the existence of more Summers brothers (my Gawd is that Adam X the X-Treme’s music!), I’m known theorizing this could mean an array of Gabriel Summers. As I’ve gone back into his origins, this actually begins to make more and more sense.

In his origin, the Summers family parents are pregnant with Gabriel when they’re captured by the Shi’ar and Emperor D’ken. Although D’ken kills Scott, Alex and Gabe’s mom to punish Corsair for an escape attempt, he saves the baby and has him aged up to adolescence. Given this Shi’ar technology, and the fact that we know they have cloning tech readily available (it’s used on Professor X at the end of the Brood Saga for example), there could easily be a variety of Gabriel Summers clones running around.

This could also explain why Gabriel Summer’s personality is so different in the pages of Hickman’s X-Men (You know, aside from the creator simply wanting to make him fun to write).

The other way you could work in a narrative of multiple Vulcans is simply through the nature of the Fault, where timelines and realities bleed together.

Likewise, the inclusion of “countless realities” opens all kinds of doors, from Apocalypse trying to get to his first horsemen in the upcoming X of Swords, to the lifelines of Moira X!

On a final note, I fully expect the Shi’ar to want a word with Vulcan. Xandra Neramani has to account with Vulcan killing her mother, Lilandra (and not to mention trying to kill her genetic father, Charles Xavier by throwing him into the M’Kraan Crystal in ‘Rise and Fall of the Shi’ar Empire’). Plus you’ve got Deathbird as a former love interest… If the Shi’ar are going to make a point of demanding a mutant for trial (a la Jean Grey in the Dark Phoenix Saga, Gabriel Summers would likely be first on the list).

Obviously there’s a lot to unpack here, and probably we’ll get some good answers as soon as X-Men #9. Plus, I have to admit the likelihood that Hickman’s plans for this thread are unpredictably brand new are super high! Nonetheless, there’s a lot of connective tissue here that has been very fun to explore, and whether any of it bears fruit in future Marvel Comics, hopefully you now have some more fun stories and Marvel history in your back pocket.